It's day 13 of our Algarve tour and the start of our Lagoa 2 day tour. Lagoa is the coastal paradise of the Algarve. The city is known for its sea caves, secluded beaches and cliff-side villages.

It was early morning when I checked out from Vila Vita Parc and headed to the chapel of Nossa Senhora da Rocha in Porches. This lonely chapel sits right on the edge of a cliff, sheltered by the white walls of an old fortress. I stood outside for a moment, enjoying the unobstructed view of the ocean, with no buildings or people in sight, a rare place to find in the Algarve. 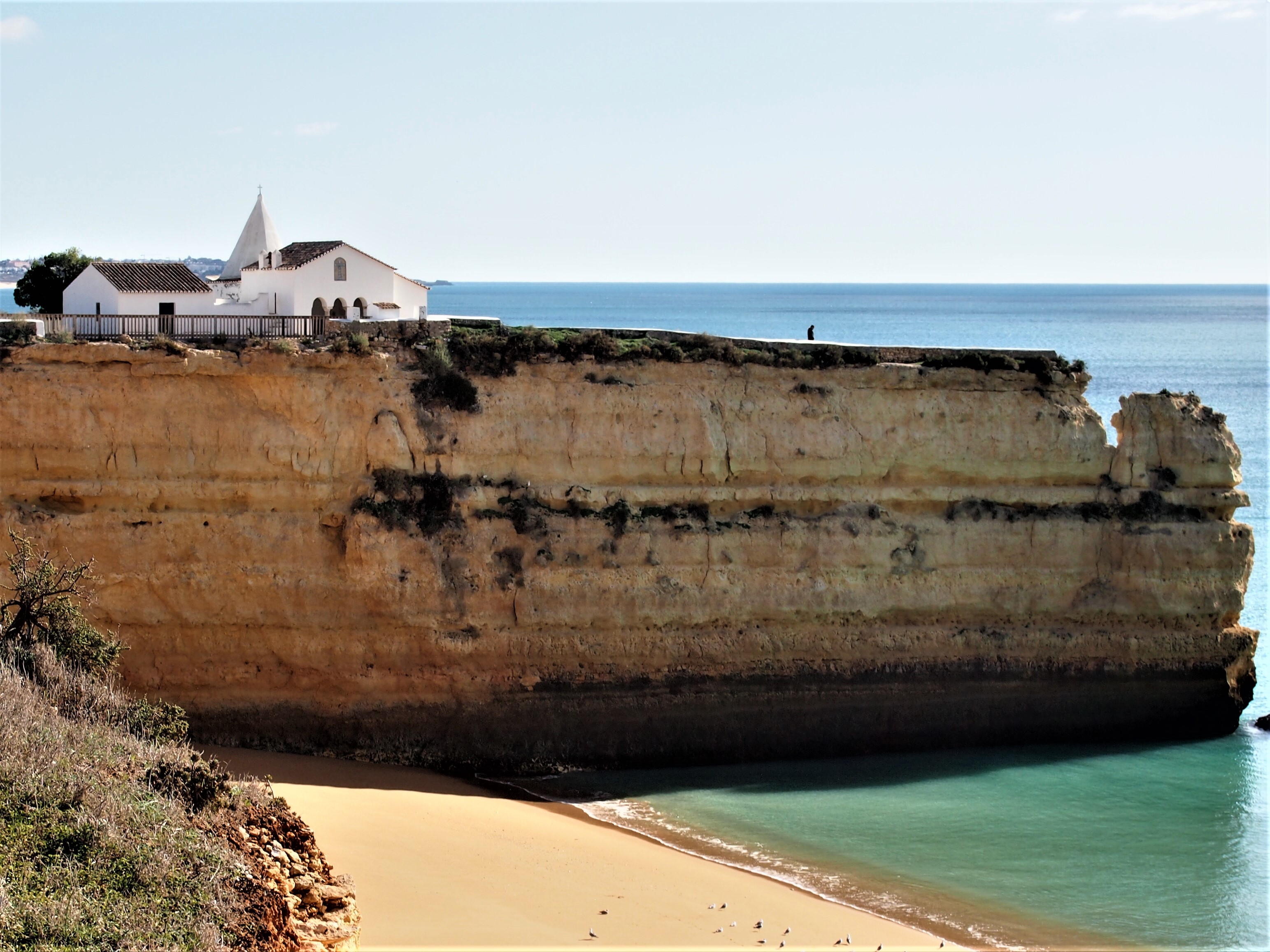 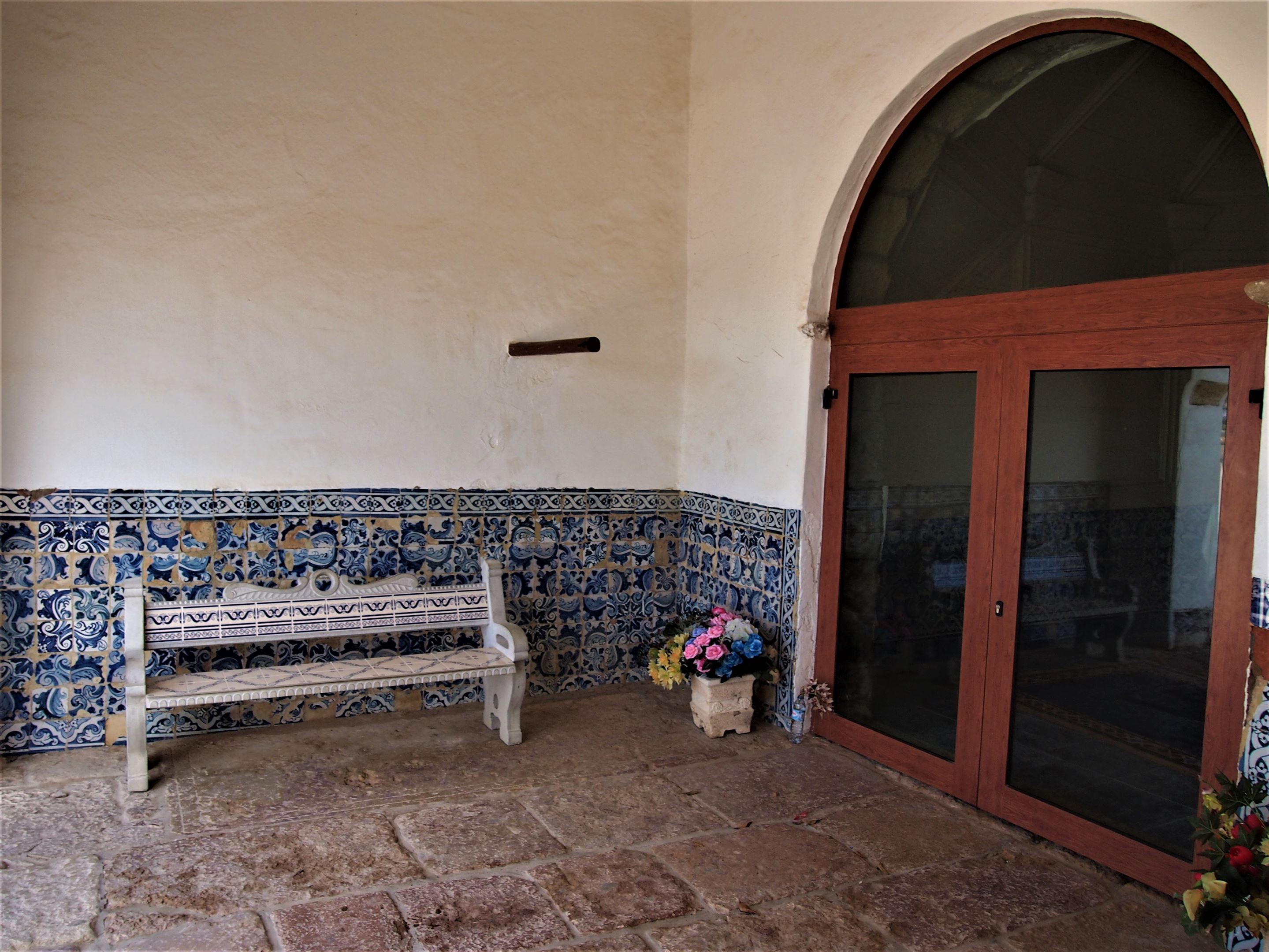 At the entrance of Nossa Senhora da Rocha, Porches. Inside the door is the altar. 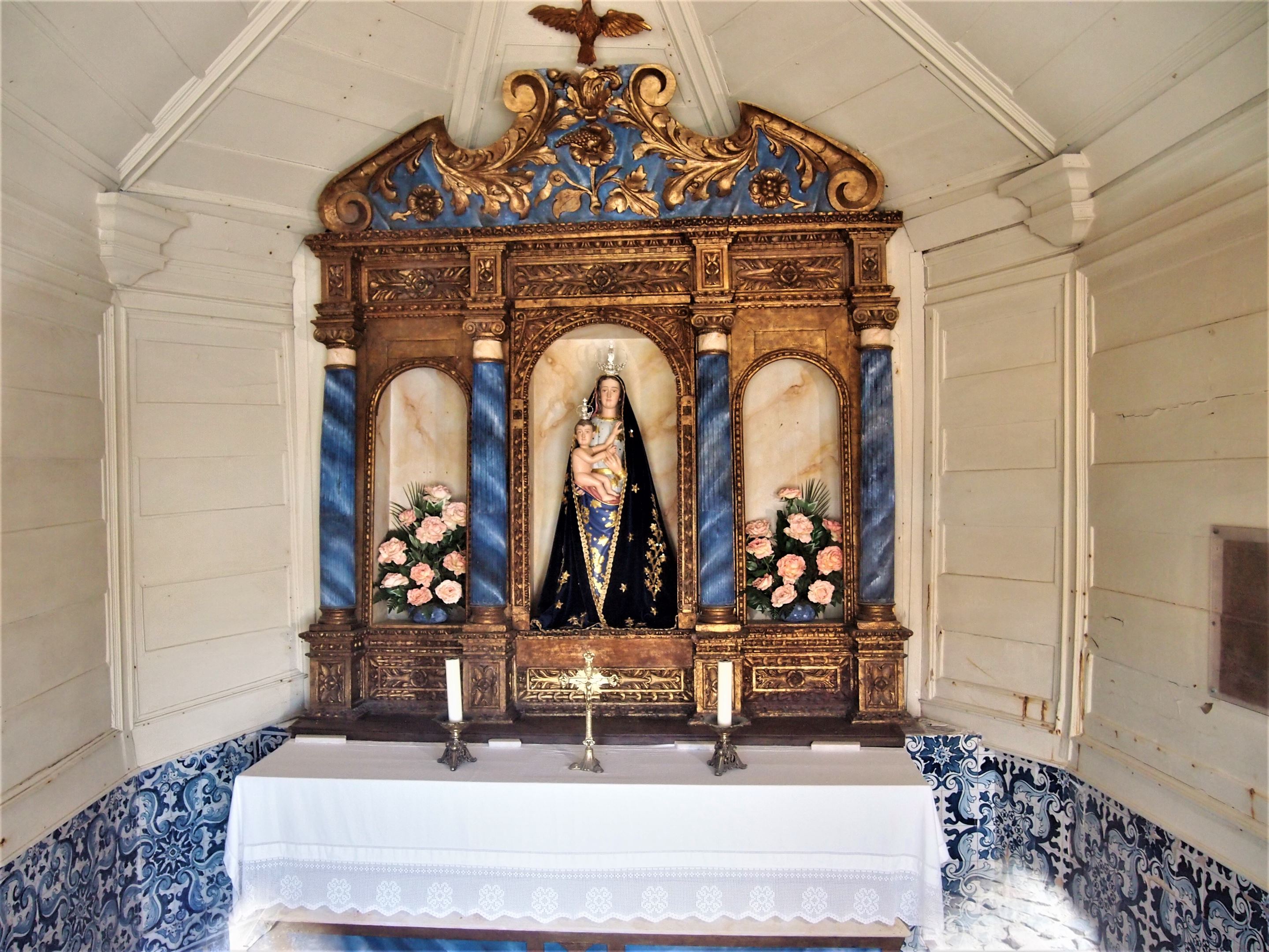 After visiting the chapel, I drove to the centre of Porches to visit the famous ceramic workshops. I started at the Porches Pottery, the most popular pottery store in town. As soon as I went in, I was blown away by the number of ceramic pieces on display. Everywhere I looked, there were plates, bowls, flower jars and many other handmade items covering the shelves of the store from the bottom to the top. In the corner, I saw one of the artists in action, adding the finishing touches to a new piece.

Porches Pottery also has a small café, called Bar Bacchus where you can grab a bite to eat. I decided to have a quick cup of coffee here, before moving on to the next store.

It’s hard to miss Olaria Pequena with its blue sign contrasting against the white walls of the building. The store is much smaller than the Porches Pottery and mainly sells tile panels, which are inspired by local themes like lemons and olives. 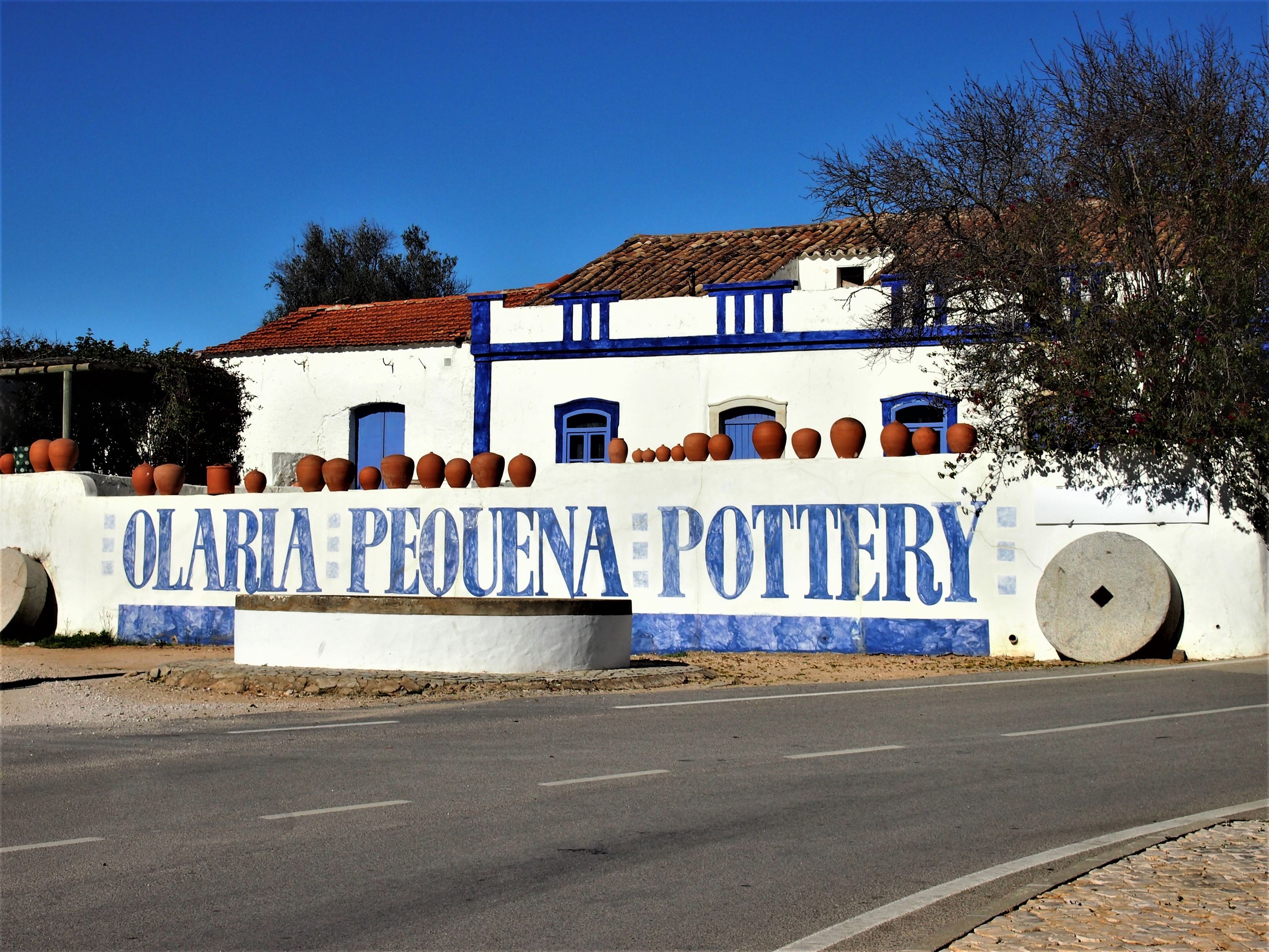 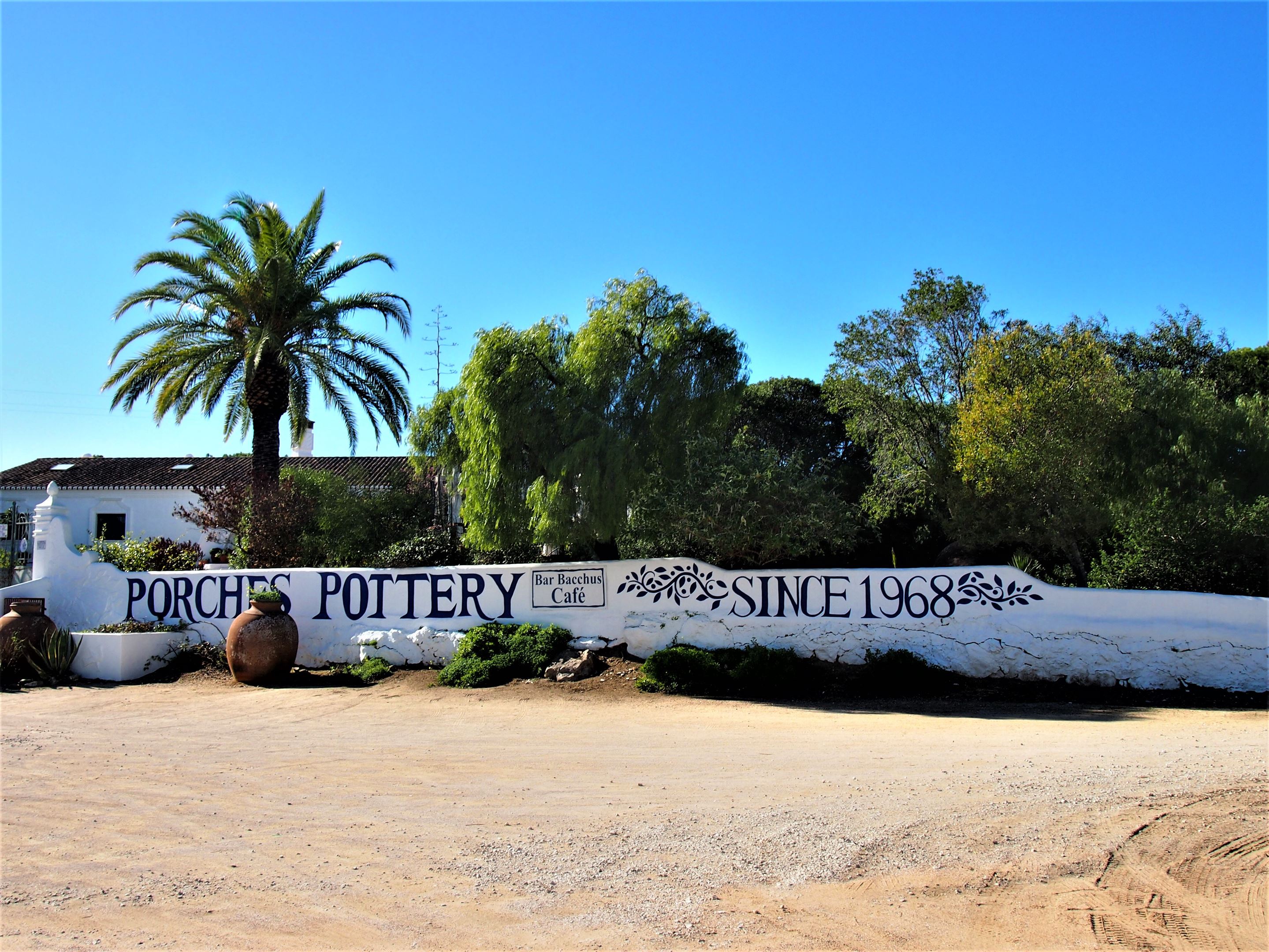 From here, I walked to the restaurant O Leão de Porches for lunch. I passed through the gates and followed the cobblestone path leading to the restaurant’s outdoor patio, where I sat waiting for the menu. While I waited, I admired the ornamented chimney sitting above the restaurant’s roof and the colourful ceramic plates adorning the walls. Soon after, the waiter arrived and I placed my order - a cauliflower soup, mussel risotto and a bottle of the local wine. 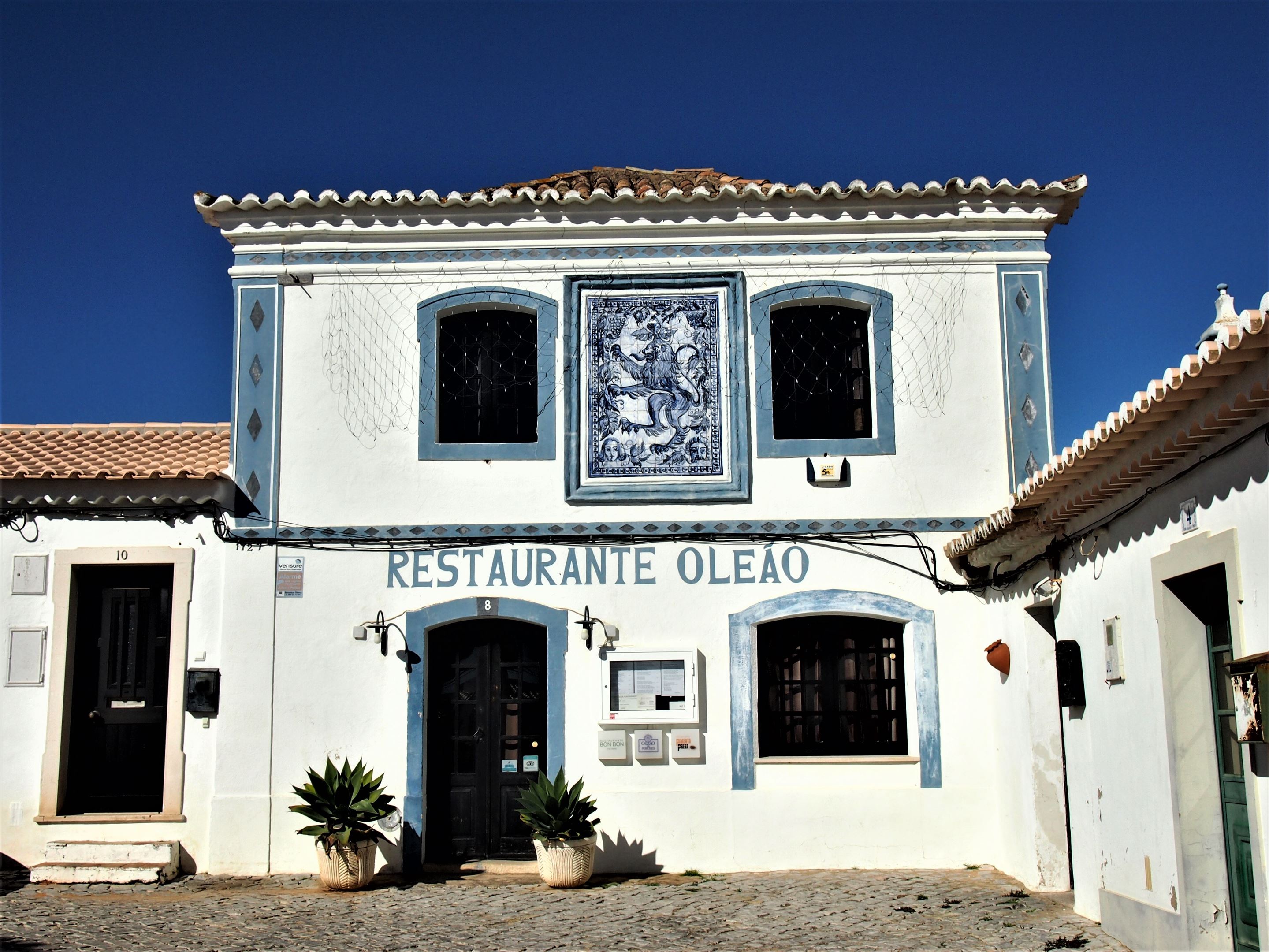 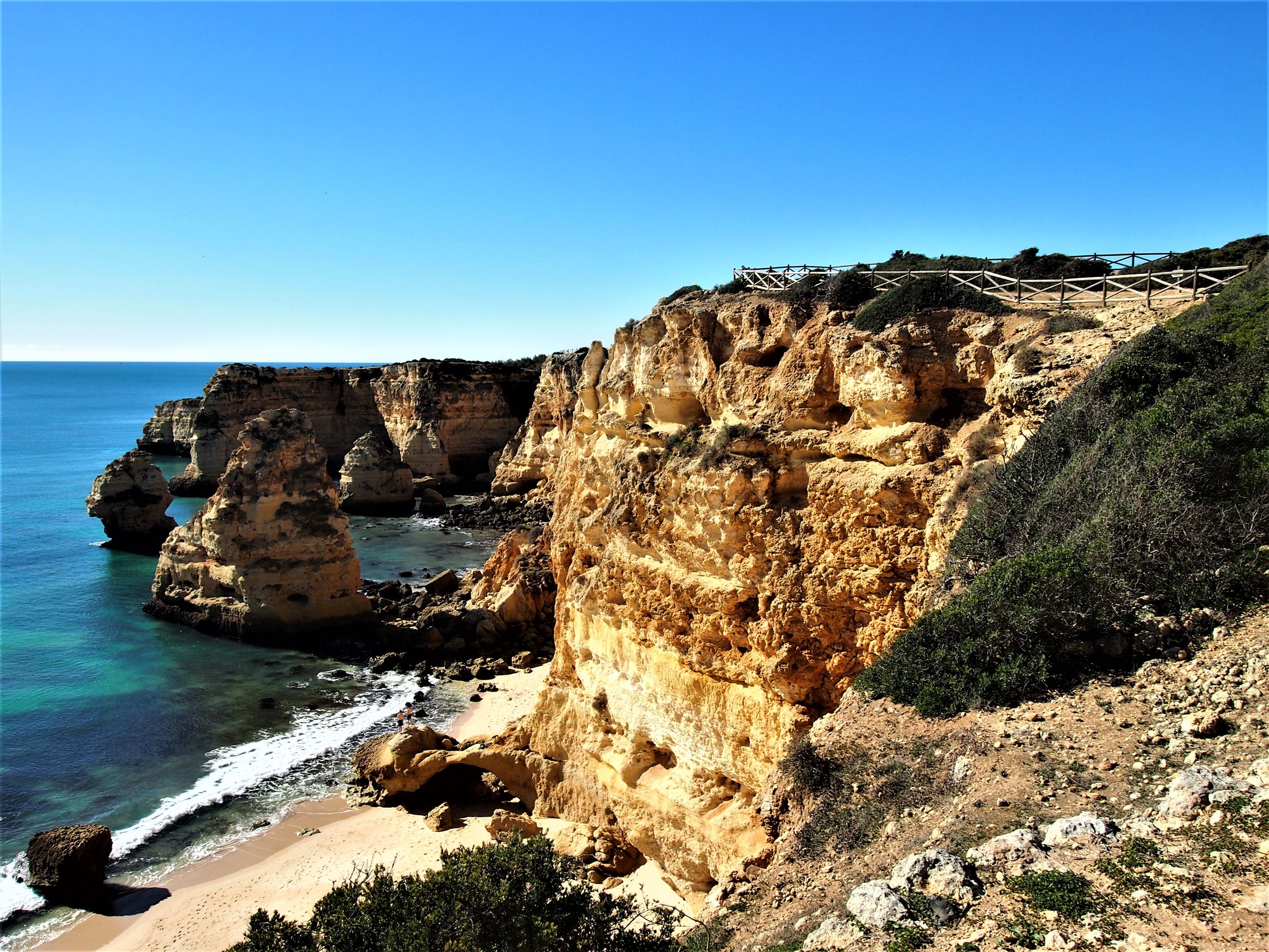 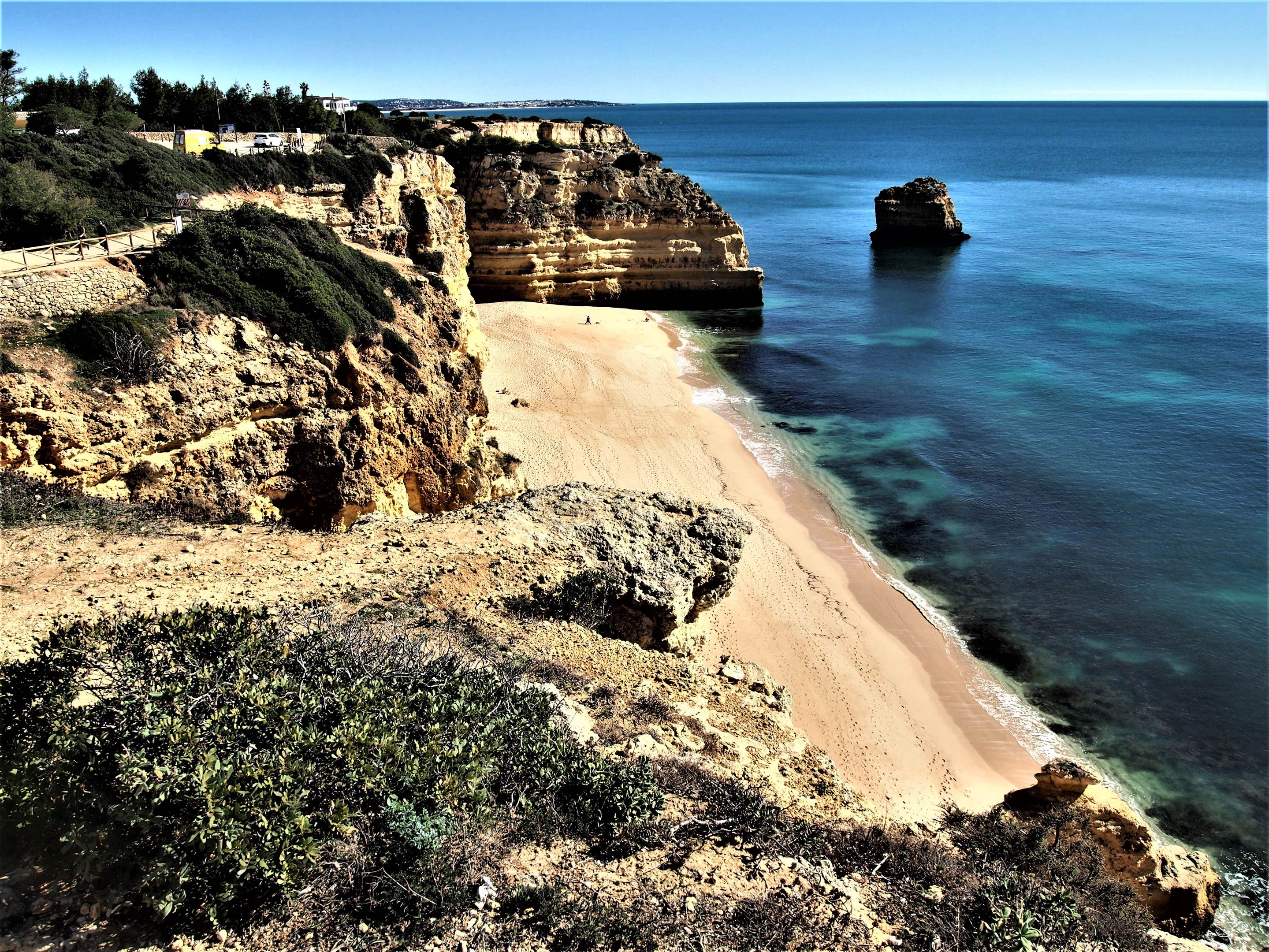 In the afternoon, I drove to the village of Carvoeiro. My first stop was Praia da Marinha, a quiet cove beach with transparent waters and steep orange cliffs. I parked the car and took the stairs down to the beach, occasionally stopping to admire the breathtaking views from the top.

Next, I went to Praia de Benagil and joined a boat trip to the caves. The tour took around one hour and passed through magnificent rock formations, secluded beaches and stunning caves. Among these caves, was the Benagil Cave, the most beautiful place I’ve seen during this journey to the Algarve. The cave has a large hole in the ceiling, allowing the sun to come through and form a spotlight on the tiny beach below it. 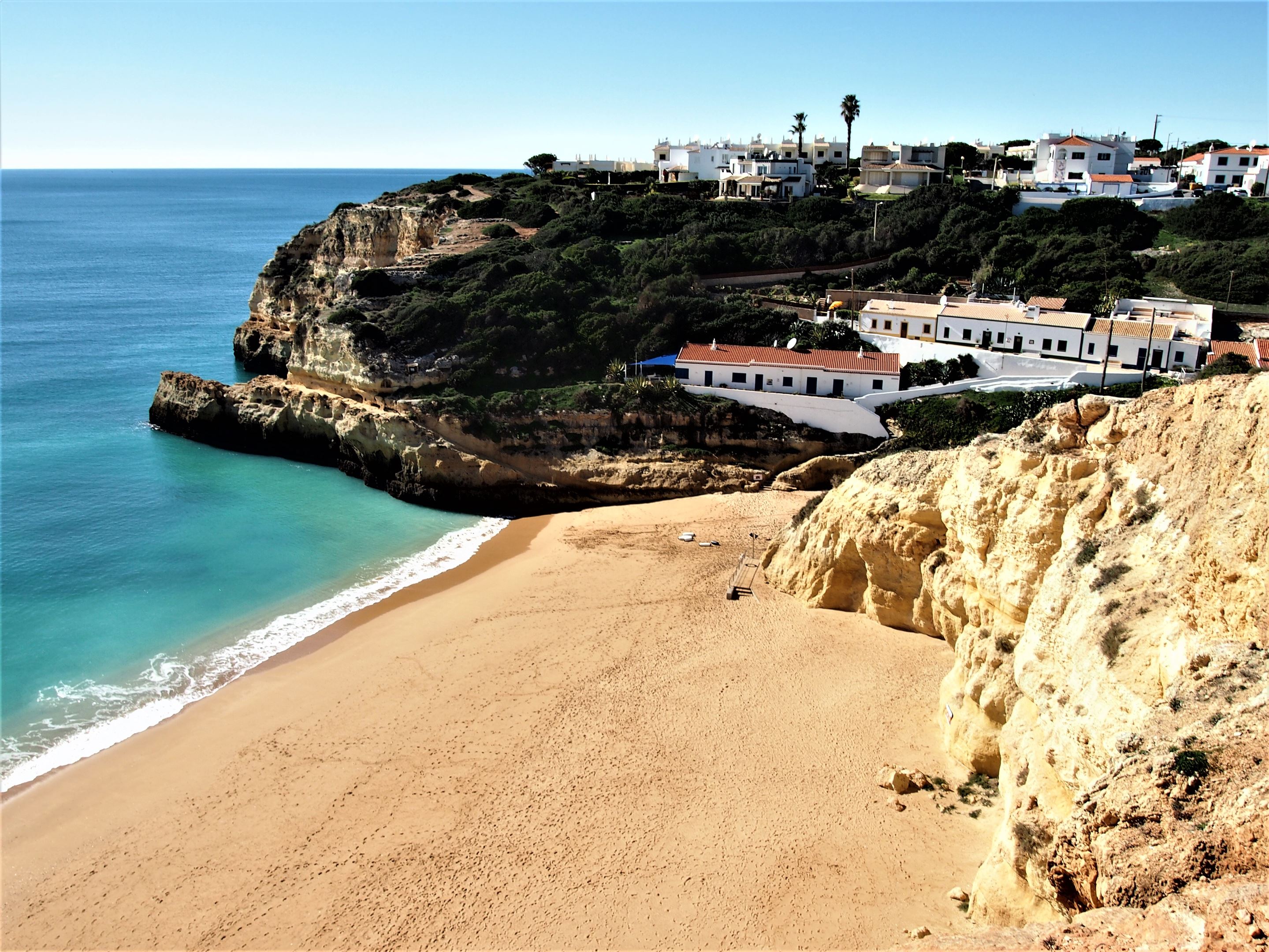 Praia de Benagil, Carvoeiro - with the village of Benagil in the background 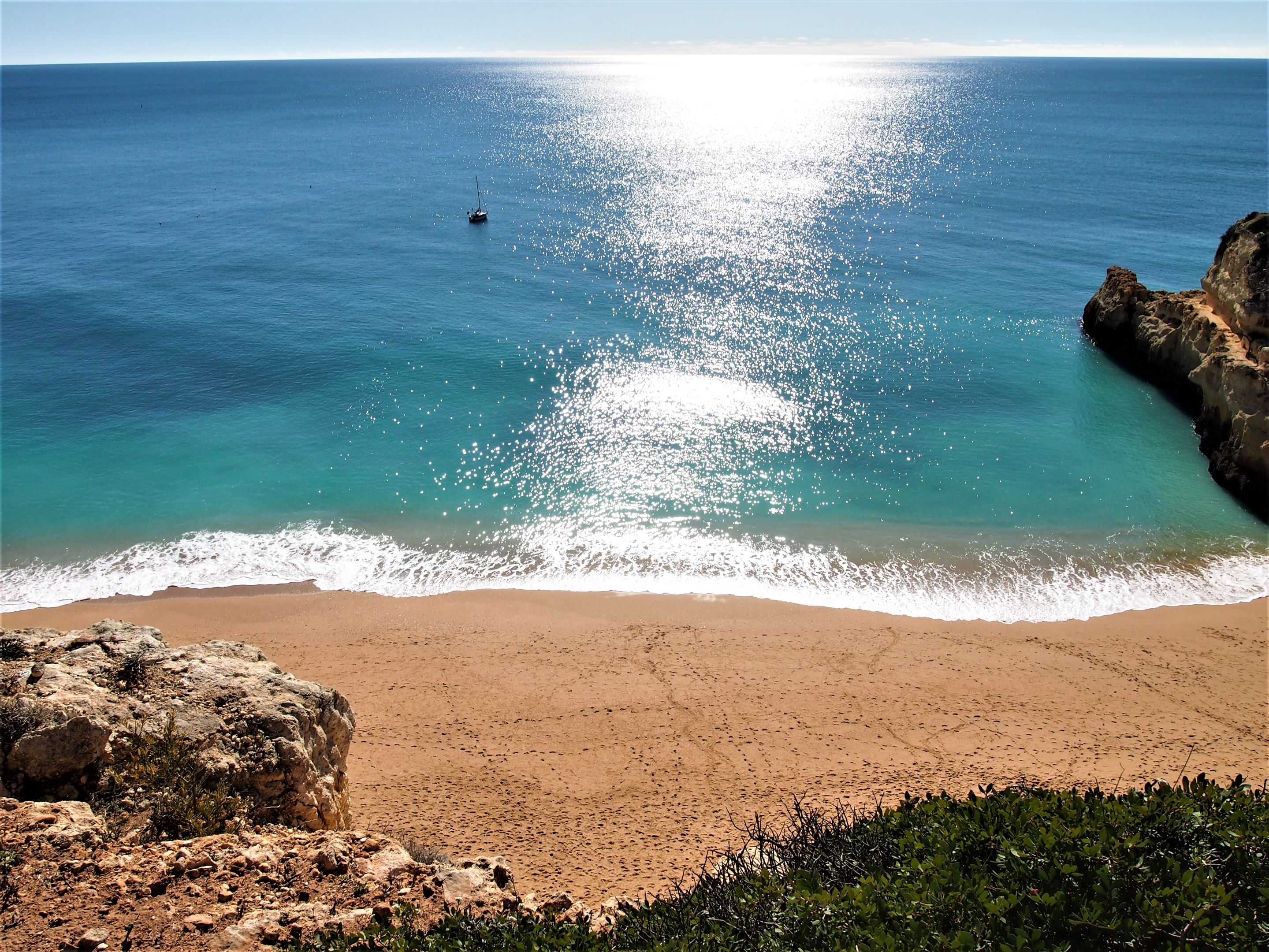 Back on the shore, I headed to the fort of Nossa Senhora da Encarnação. The fort is set right above the main beach of Carvoeiro and it’s the perfect place to capture the town and its typical whitewashed buildings.

Just beside the fort, I saw a large wooden boardwalk stretching along the coastline and I was immediately curious to see where it was leading to. I got on it and walked across the cliffs, feeling the refreshing sea breeze along the way. I ended up at Algar Seco, an area full of spectacular rock formations, grottoes and sea caves. The view from the top was already impressive, but I decided to venture even further and followed the stairway down to the rocks. There were holes everywhere, windows framing the sea and tunnels leading to stunning natural pools. I even found a restaurant hidden amongst the rocks, where I sat down and enjoyed a nice cocktail.

Before going to the hotel, I stopped at a nearby local restaurant for dinner called A Marisqueira and had a delicious plate of grilled fish. 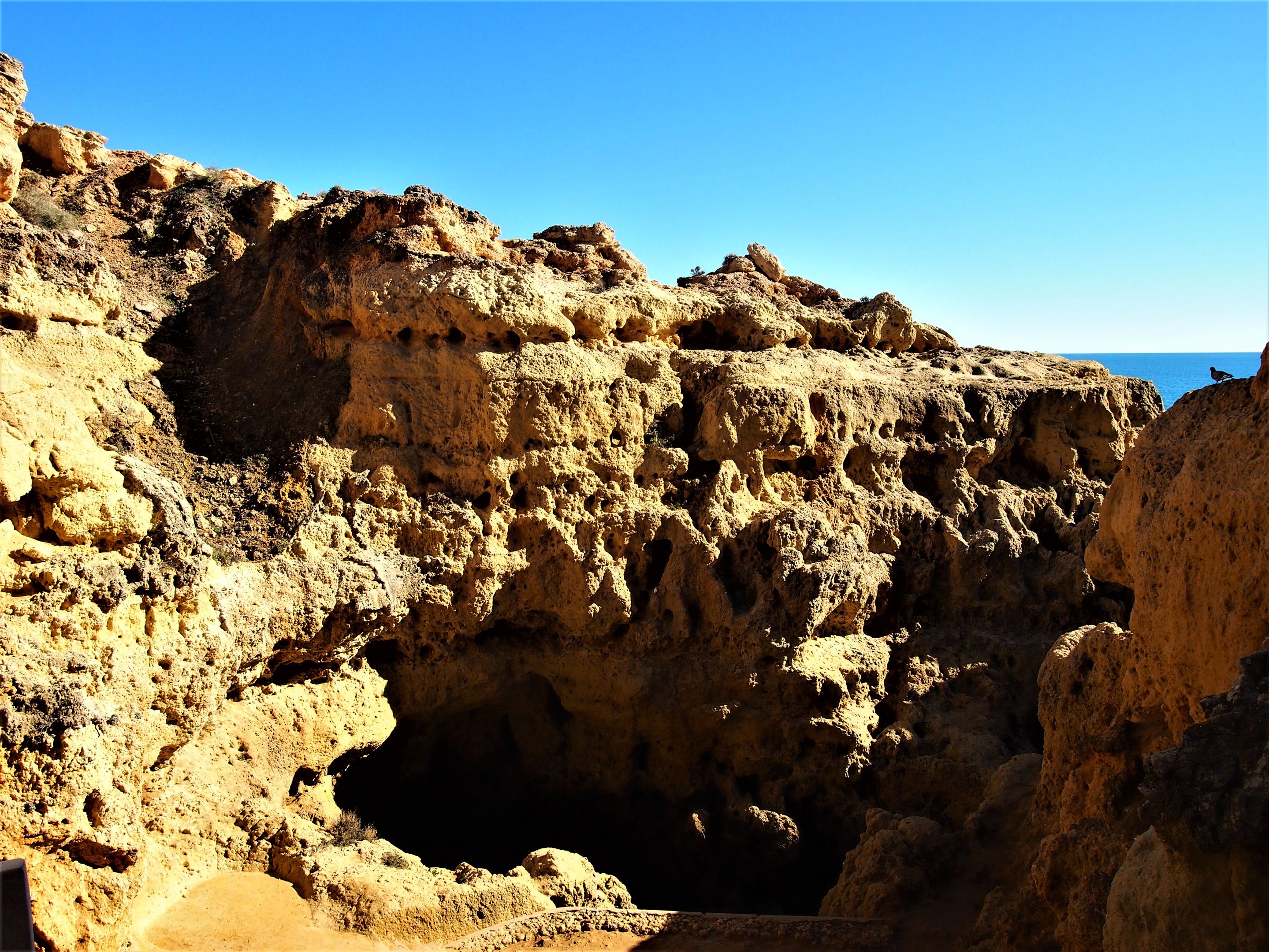 Algar Seco, Carvoeiro - at the top before descending the rocky steps 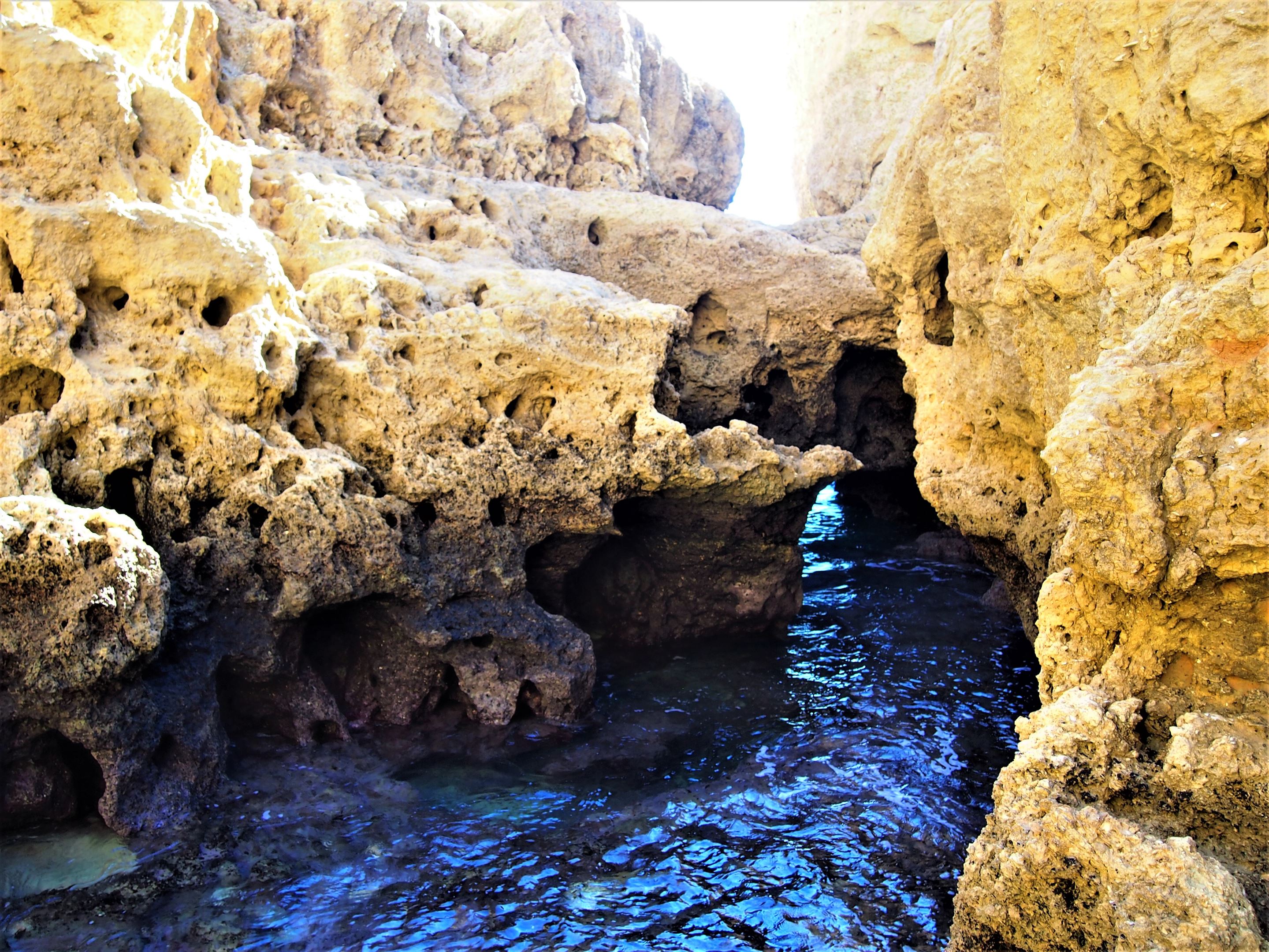 Algar Seco, Carvoeiro - at the bottom 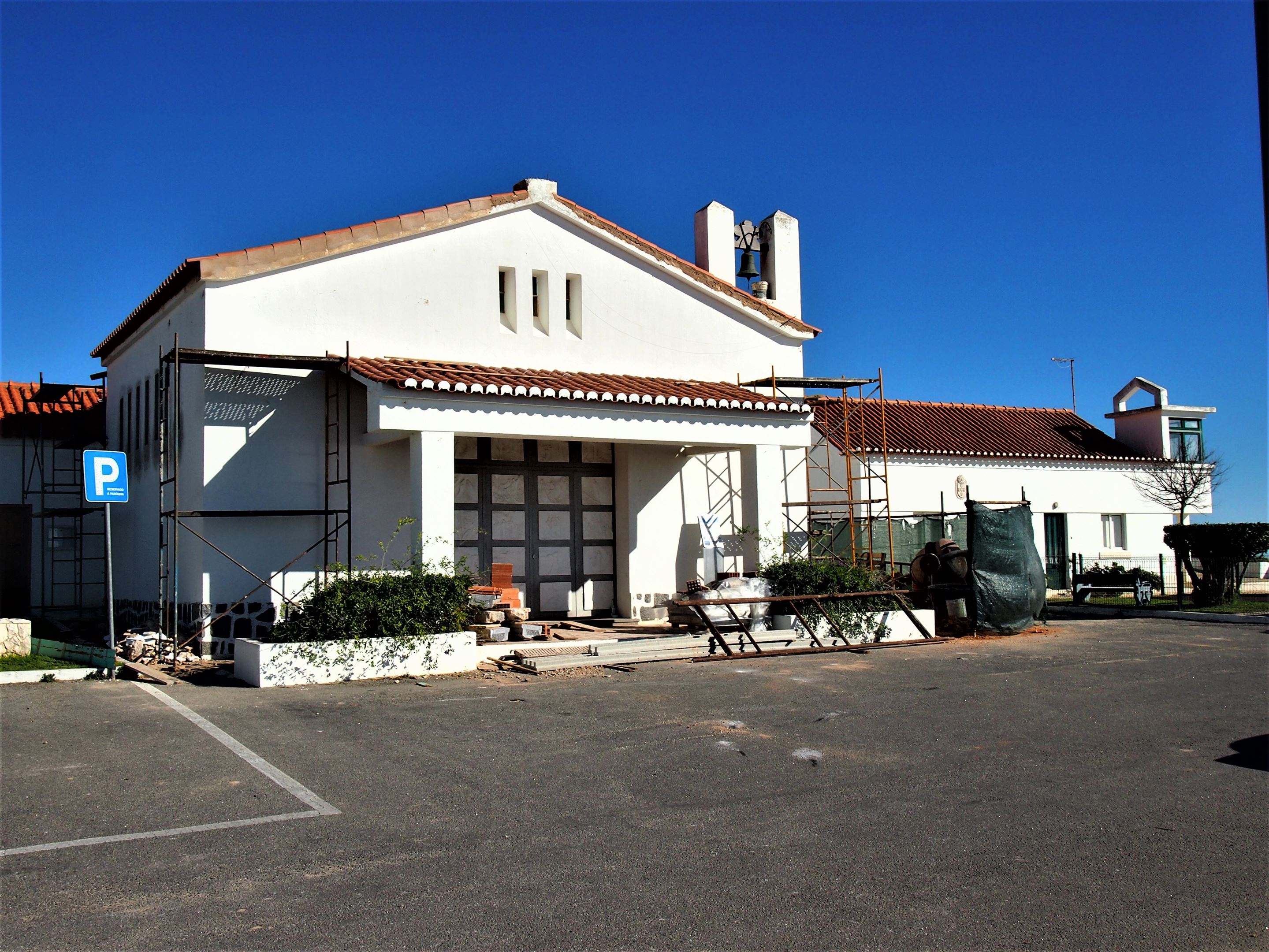 Nossa Senhora da Encarnação, Carvoeiro - on our visit refurbishment of the building was taking place

Once again, the team of Iberian Escapes took care of my accommodation and booked me a room at the Monte Santo Resort, one of the most romantic hotels in Europe. Surrounded by small lakes and gardens, the hotel is an authentic oasis and I couldn’t have chosen a better place to relax in Lagoa.

Walking / Driving map for Day 1 of this Lagoa tour

We are on the Lagoa 2 day tour - day 2 and day 14 of our Algarve tour. I left Monte Santo after breakfast and started the day at Lagoa’s local market, looking at the food stalls selling fresh fish and other regional delicacies. 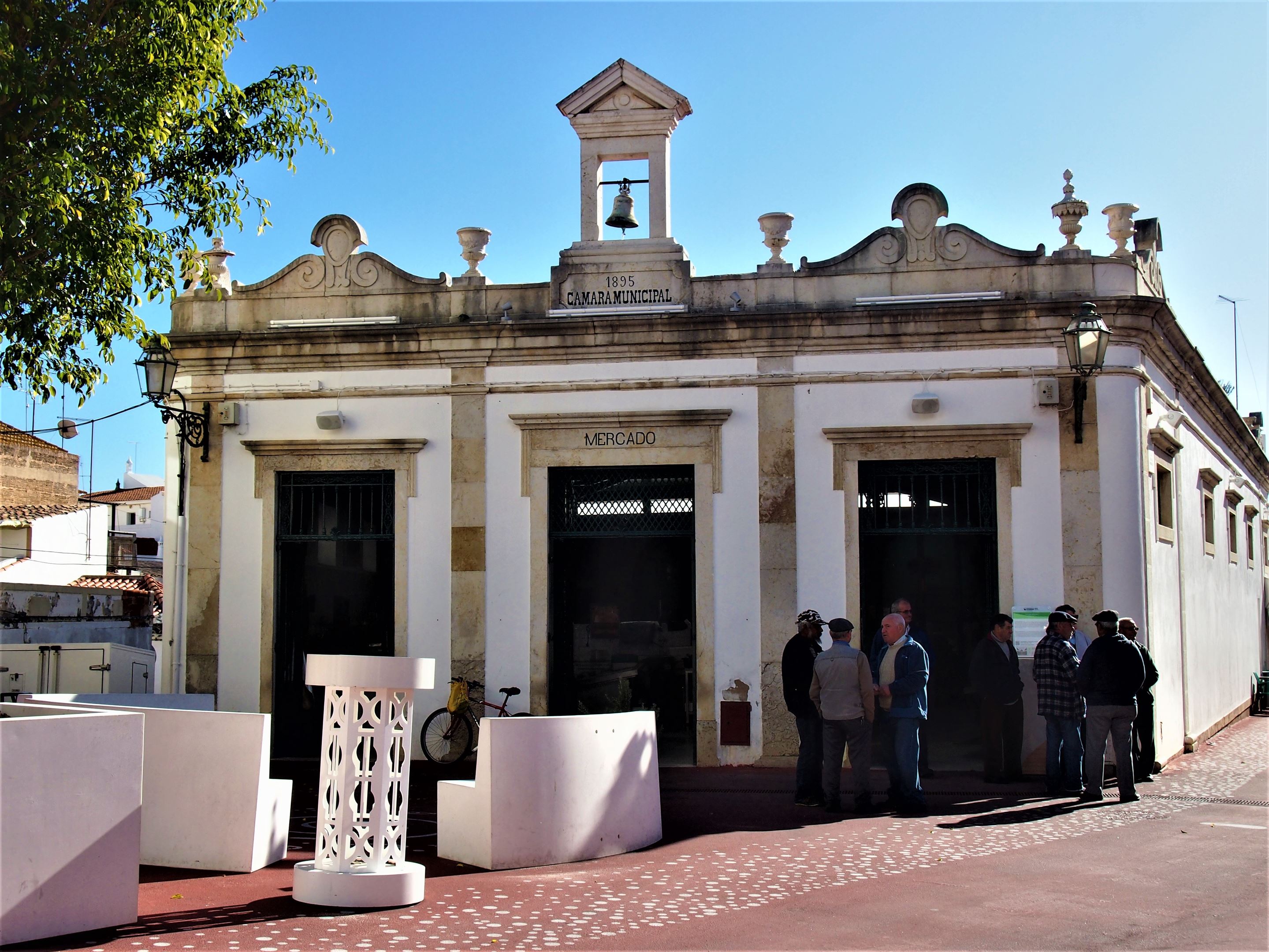 The Mercado Municipal (or Municipal Market) at Lagoa, Algarve 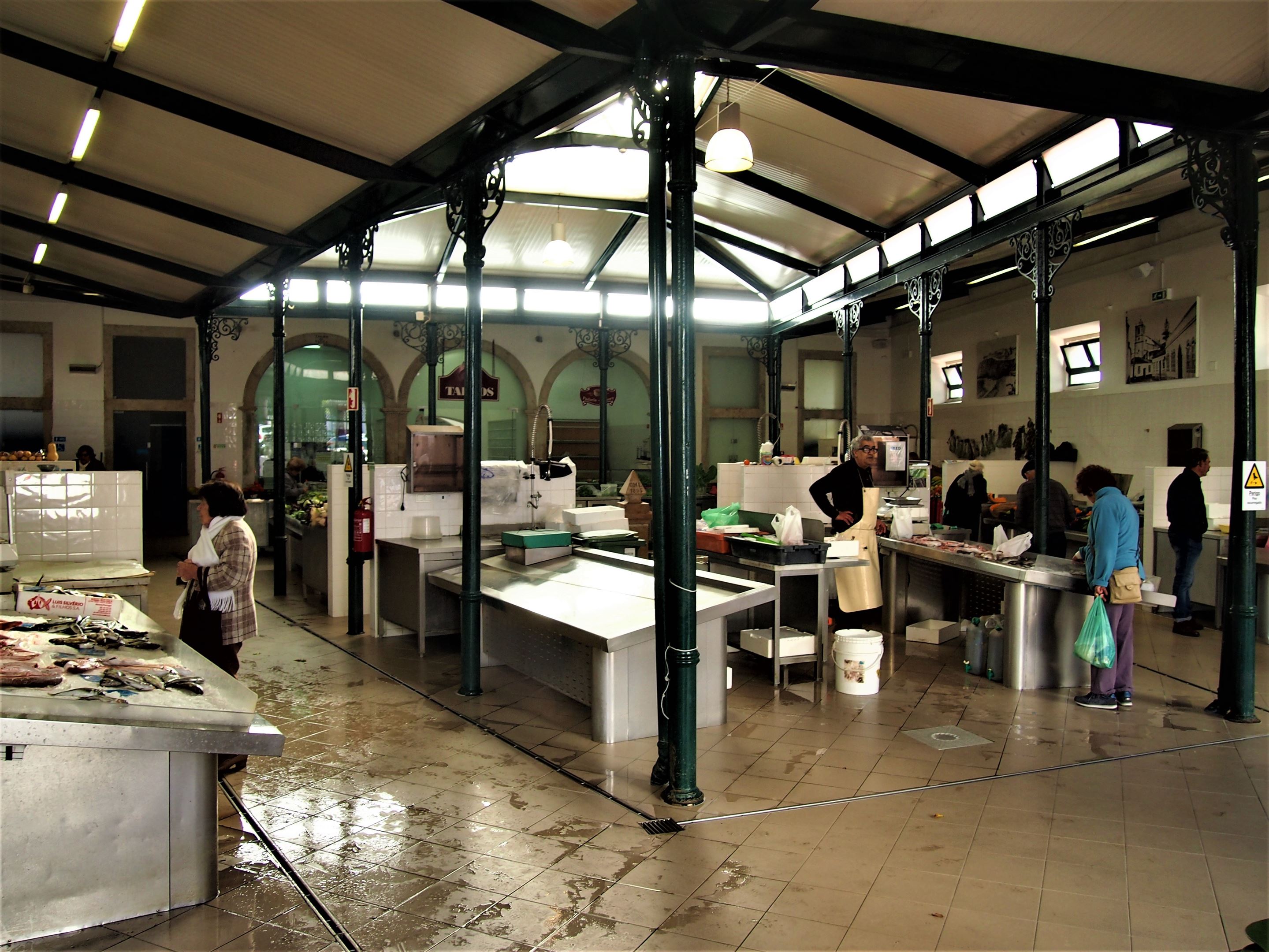 Inside the Mercado Municipal (or Municipal Market) at Lagoa, Algarve

Then, I walked to the Convent of São José, which is now the cultural centre of Lagoa. I visited the exhibition area and passed by the garden, where I saw a large menhir dating back to the 5-4th Century BC. According to the plate standing next to it, the menhir was found in Porches and was only placed here in 1975. 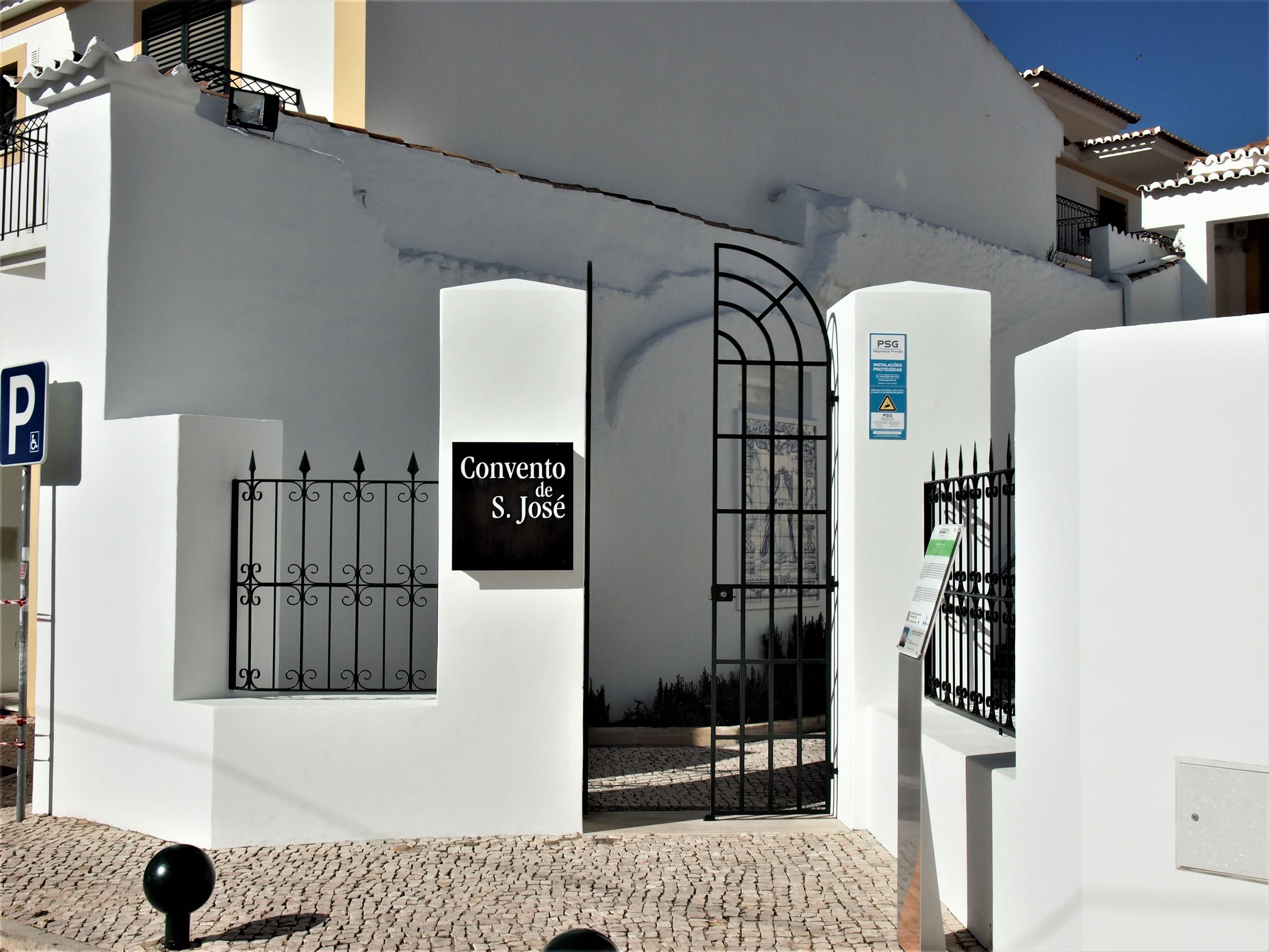 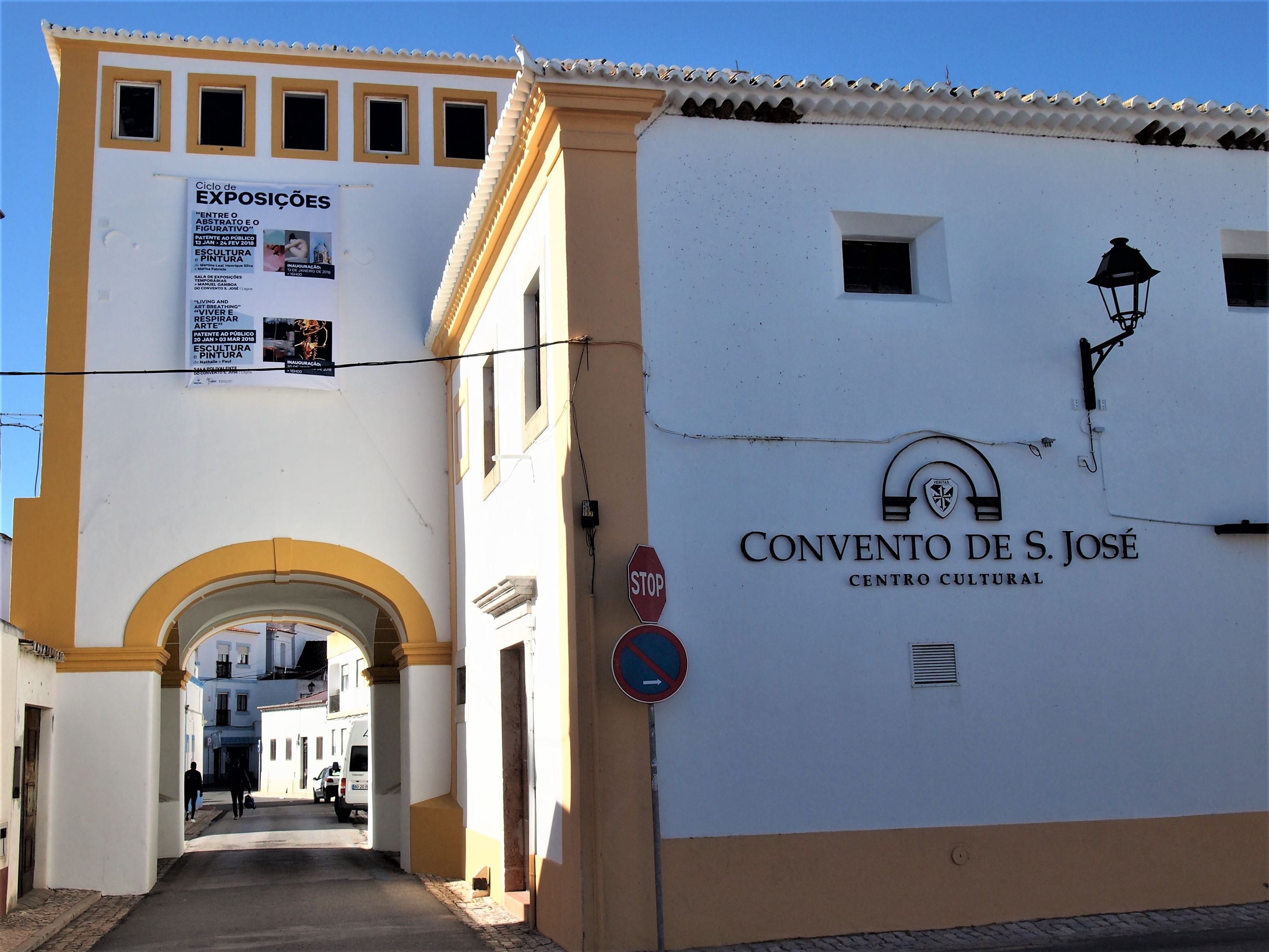 After the convent, I went for a wine tasting session at Quinta dos Vales, a large wine estate in the town of Estômbar. There are several artworks spread throughout the estate and there is even an animal area with sheep, pigs and, the one that surprised me the most, a herd of deer. The best part is that you get to feed them all if you buy the special food from the Farm Shop! 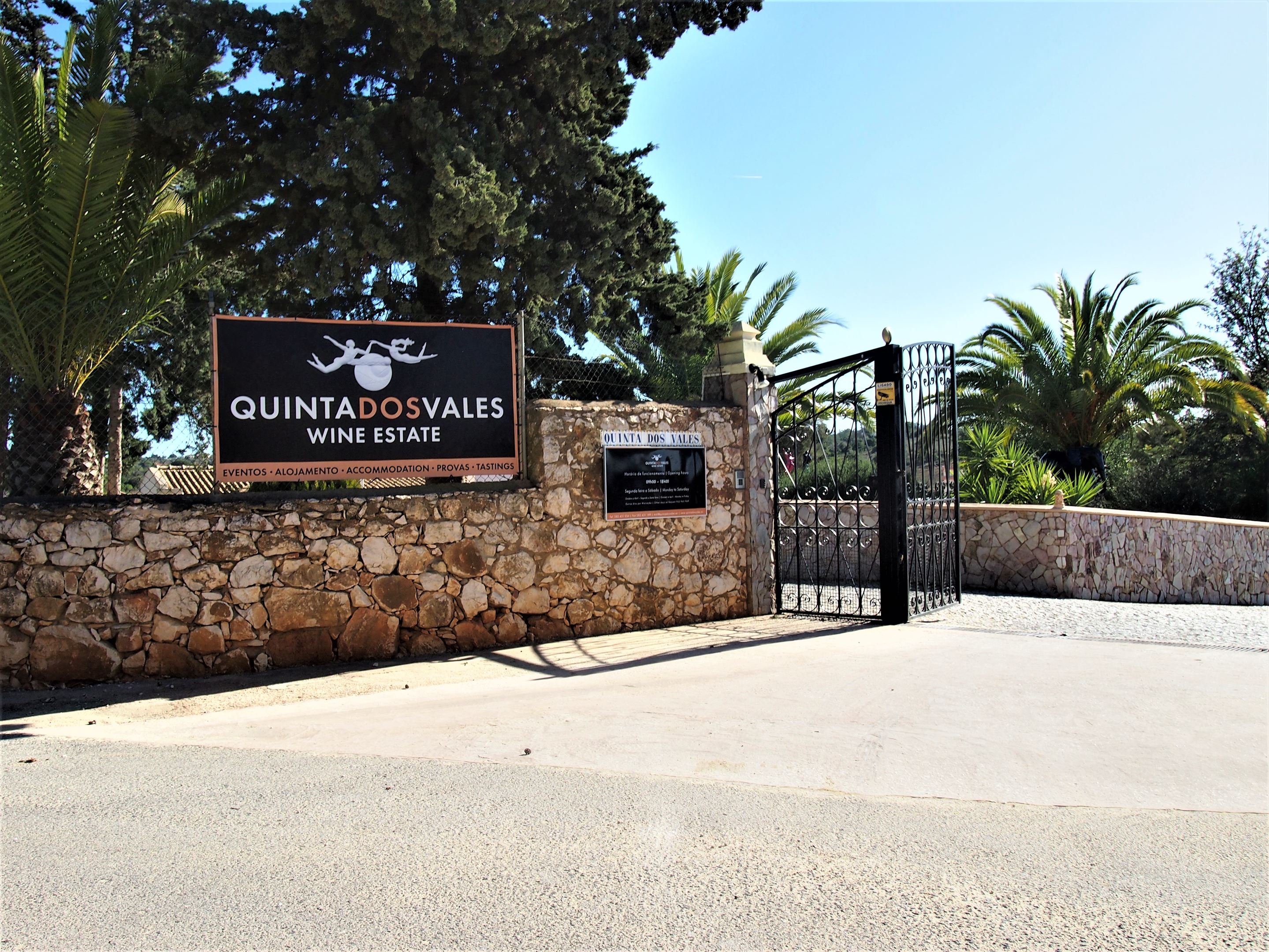 Quinta dos Vales vineyard at Estombar, Algarve (Interested in having your own wine or small vineyard? Then contact us) 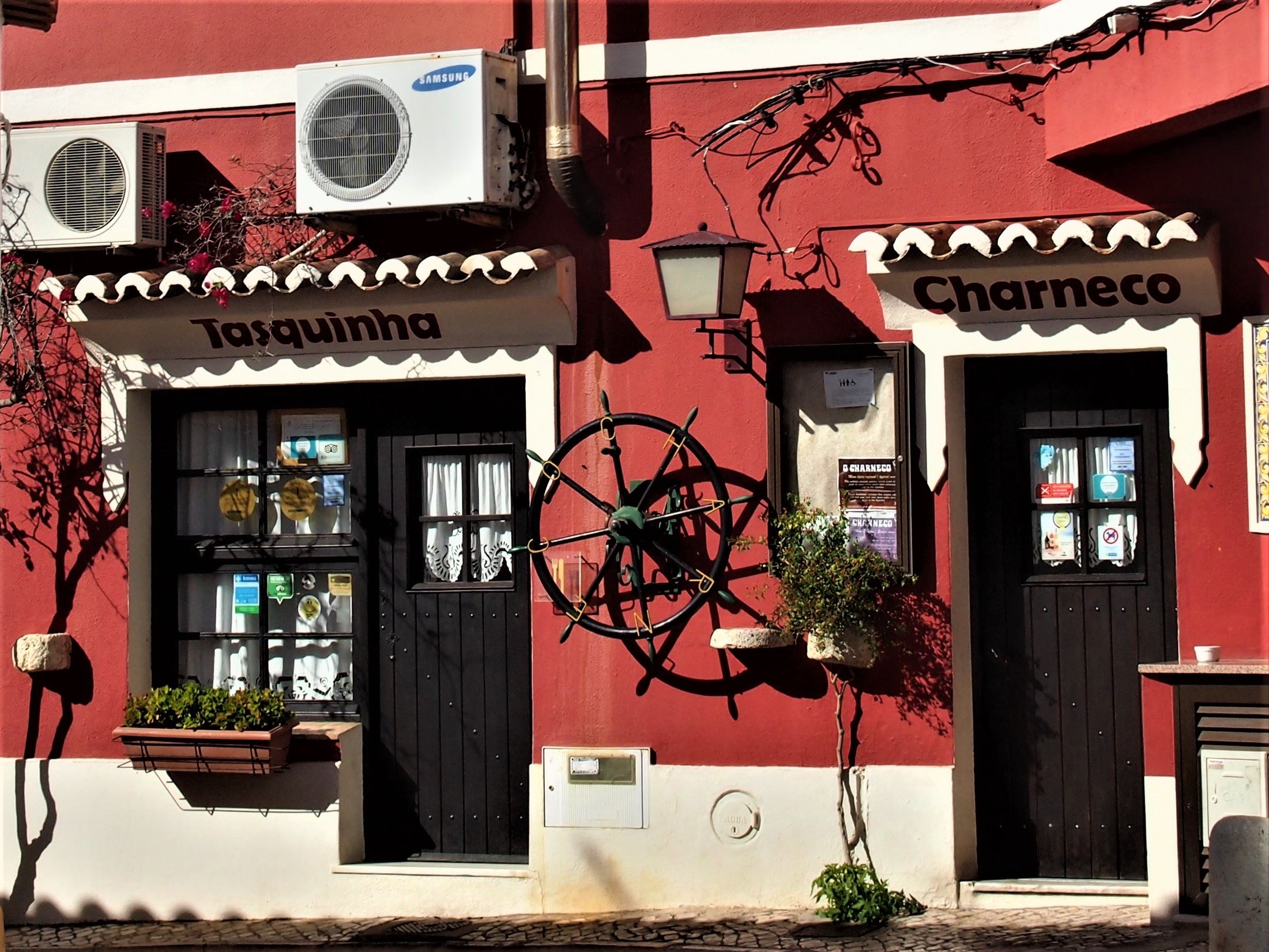 I stayed in Estômbar for lunch and stopped at O Charneco. Hidden behind the church of São Tiago, in a town of white houses, O Charneco immediately sticks out with its bright red walls and black doors. Inside, there is a rustic decoration with wooden floors and tile façades. As soon as I sat down, the food started coming. First, a basket of bread and olives, then, my main dish, a delicious lamb stew with green beans and finally, one Dom Rodrigo, a typical sweet from the Algarve made with egg yolks and sugar.

After lunch, I continued on the road to Sítio das Fontes, a large nature park set along the margins of the Arade river and one of Algarve’s hidden gems. I parked the car near the entrance and set off to explore the area, following the walking trail ahead of me. Every step I took, lead me closer to the river and its impressive landscape. On the edge of the river, I found an old mill house, one of the few buildings around here. Behind me, there was also an amphitheatre, which apparently is still used for events.

Throughout the park, there are several pools and waterways, a swimming spot for those who want to be surrounded by nature - and who wouldn’t want to swim in a place like this? If you don’t want to walk, you can simply sit at the picnic area admiring this breath taking scenario. 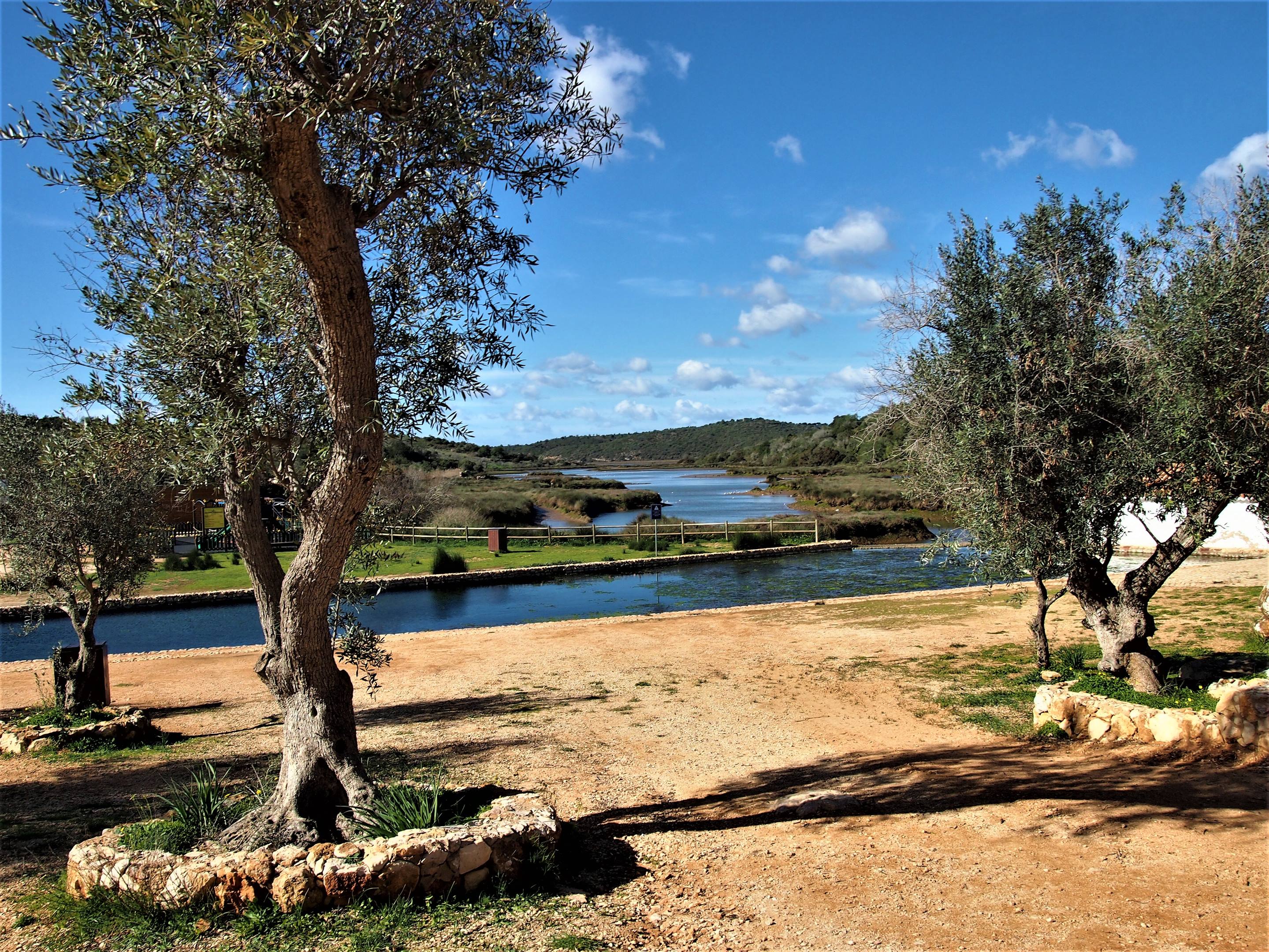 From here, I went straight to Ferragudo, a former fishing village set right across from Portimão. First, I stopped by the Fort of São João do Arade. This pretty fort sits between two beaches in Ferragudo, Praia da Angrinha and Praia Grande, which is the best place to capture the fort as unfortunately, it is not open to the public.

Then, I went over to the Lighthouse of Ponta do Altar and arrived just in time for the sunset. As the orange sky began to fade, the lights were turned on, forming a beautiful trail along the coast of Portimão on the other end. 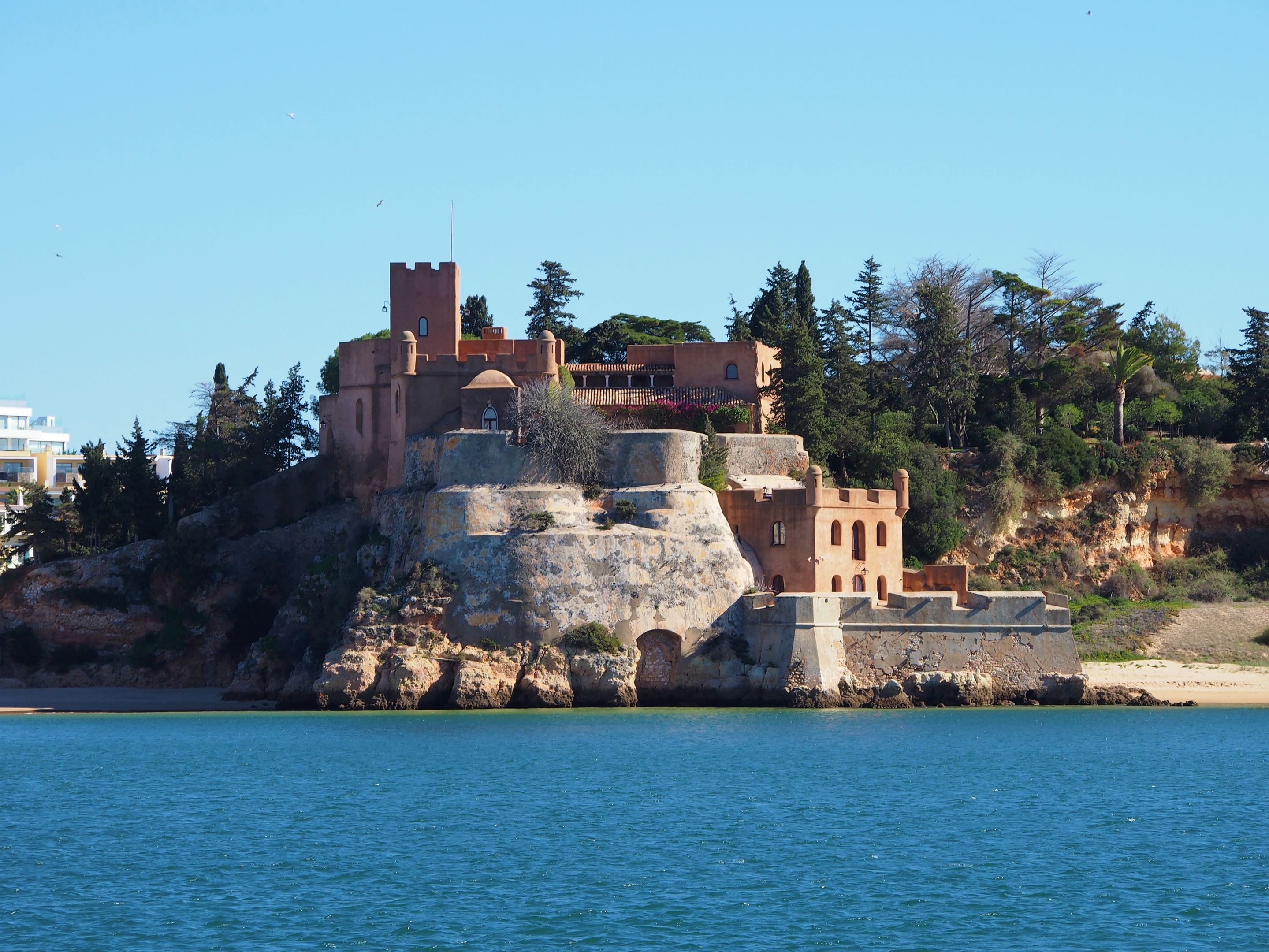 Fort of São João do Arade, Ferragudo - picture taken from the marina at Portimão. 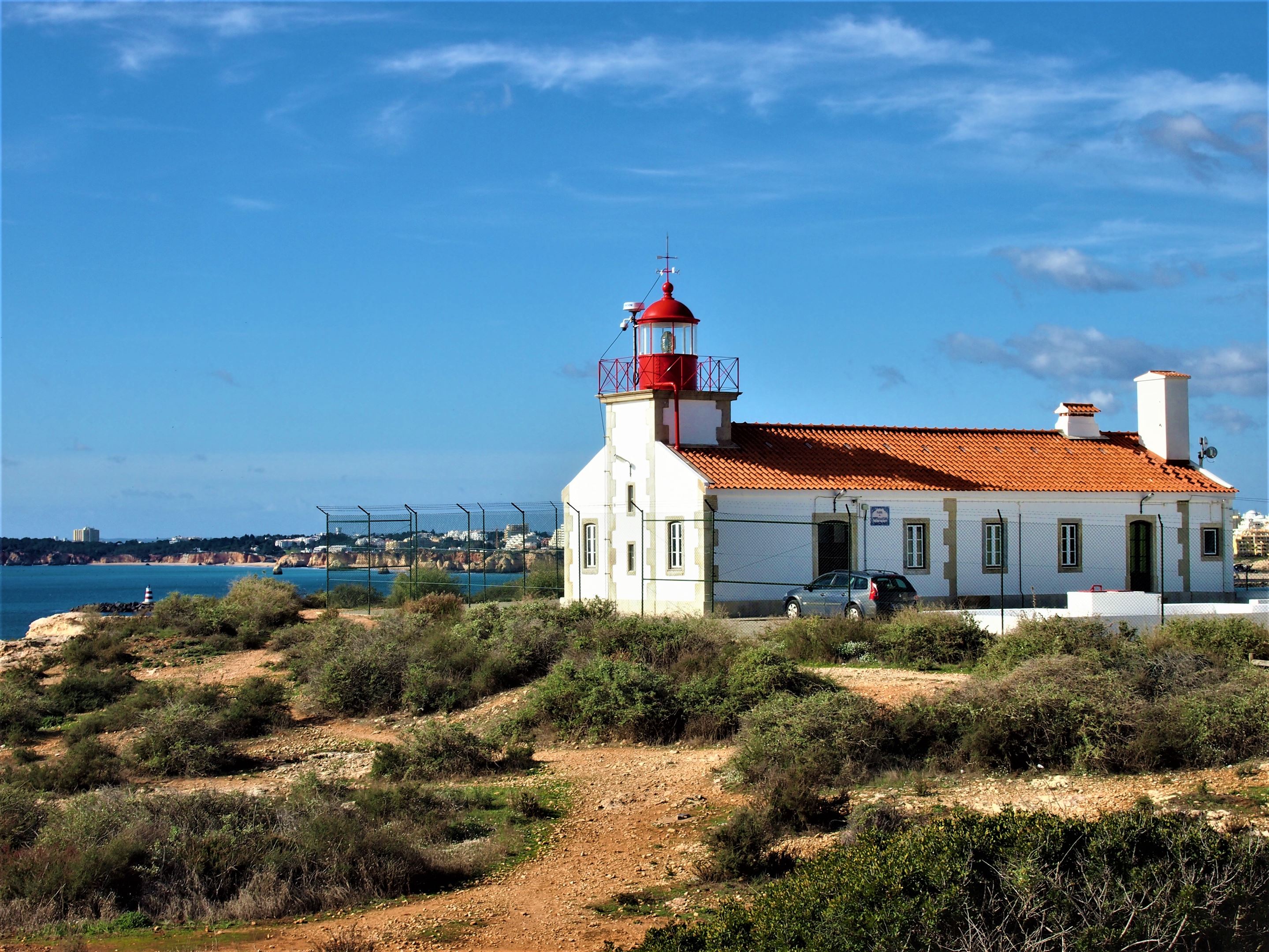 Ponta do Altar lighthouse at Portimao, located just before the entrance to the Arade River

I decided to head back to the hotel for dinner and ate at their restaurant. Looking at the menu of Monte dos Comensais, I could tell seafood was the star of the show, so that’s exactly what I ordered. Starting with a clams soup, followed by a plate of roasted octopus and to finish off, a scrumptious chocolate brownie topped with a scoop of vanilla ice cream.

Feeling satisfied, I walked up to my bedroom and started planning what I was going to see in Portimão in the next few days.

Walking / Driving map for Day 2 of this Lagoa tour