What To Do In Costa Verde

After visiting Viana do Castelo, we drove back to Porto, where we ended our Portugal road trip.

In this final leg of our journey, we made our way down the Costa Verde (Green Coast), a coastal stretch in the North of Portugal with pristine beaches fringed by pinewoods and valleys.

Many towns in this region are former fishing ports, such as Esposende and Póvoa de Varzim. But these days, it’s the beaches that lure most visitors here, as well as a casino and golf courses.

Summer is the best time to visit Costa Verde if you’re coming to the beach but, be warned—the water is pretty chilly around here. Still, the natural landscape makes up for it. Off-season you can visit historical attractions, from Iron Age settlements to military fortresses and churches.

Below are a few things to do in Costa Verde, including the best beaches and attractions to see on your way from Viana do Castelo to Porto.

Our first stop of the day was Esposende, which is roughly 30 minutes away from Viana by car. Set on the banks of the Cávado River, it’s a charming resort town famous for its pristine coastline. You’ll find most of its beaches within the Parque Natural do Litoral Norte, a natural park with dunes placed between the river and the ocean. 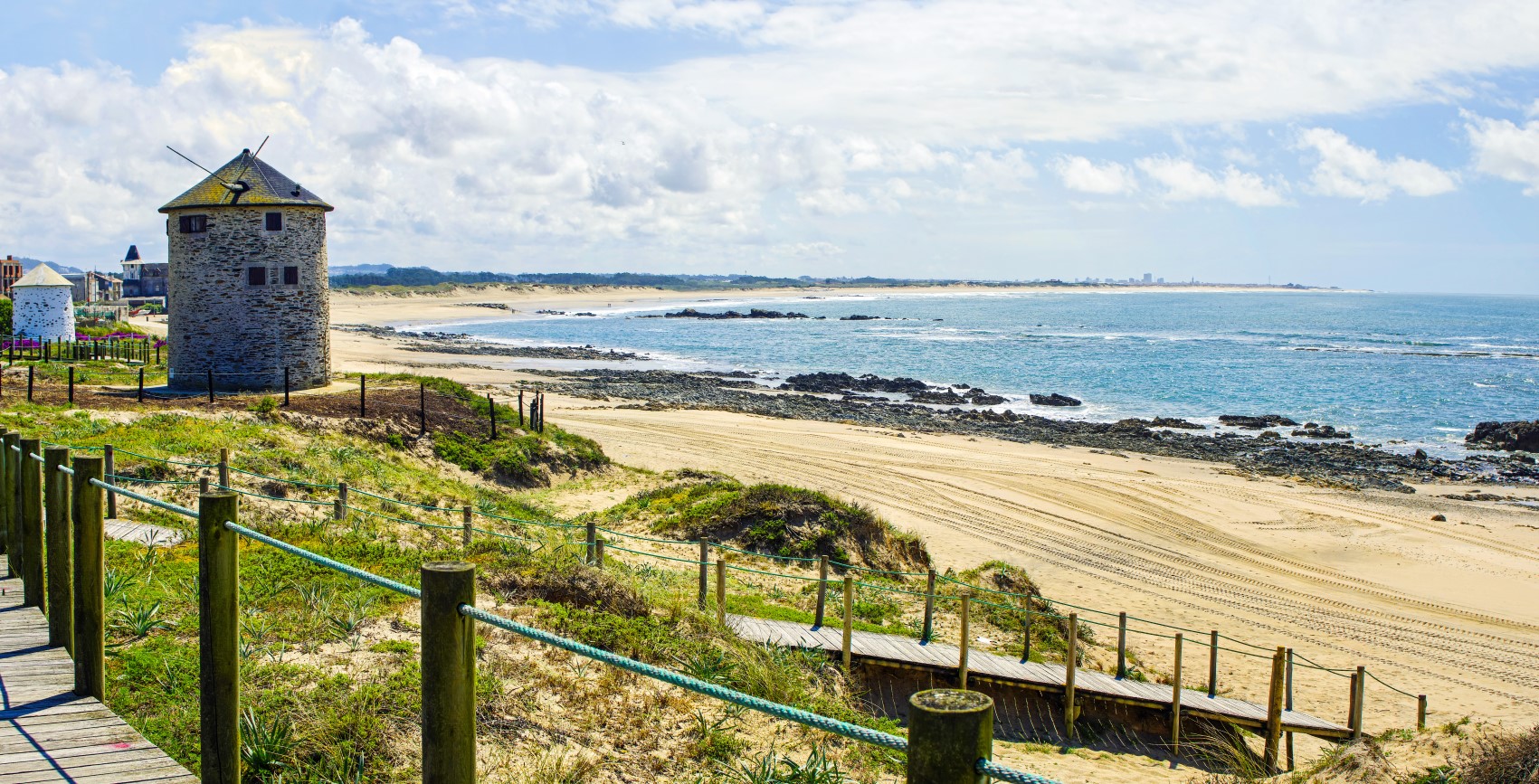 On our way to the coast, we decided to visit a couple of monuments. First up was the​ Santuário da Senhora da Guia. ​Perched on a hill in the village of Belinho, this tiny shrine boasts incredible views of the mountains and the ocean.

Next, we visited ​Castro de São Lourenço​, a fortified village dating back to the 4th century BC. Many houses are still intact, so you can imagine what it was like to live in that era. From the edge of the village, you can contemplate the river and the ocean below. 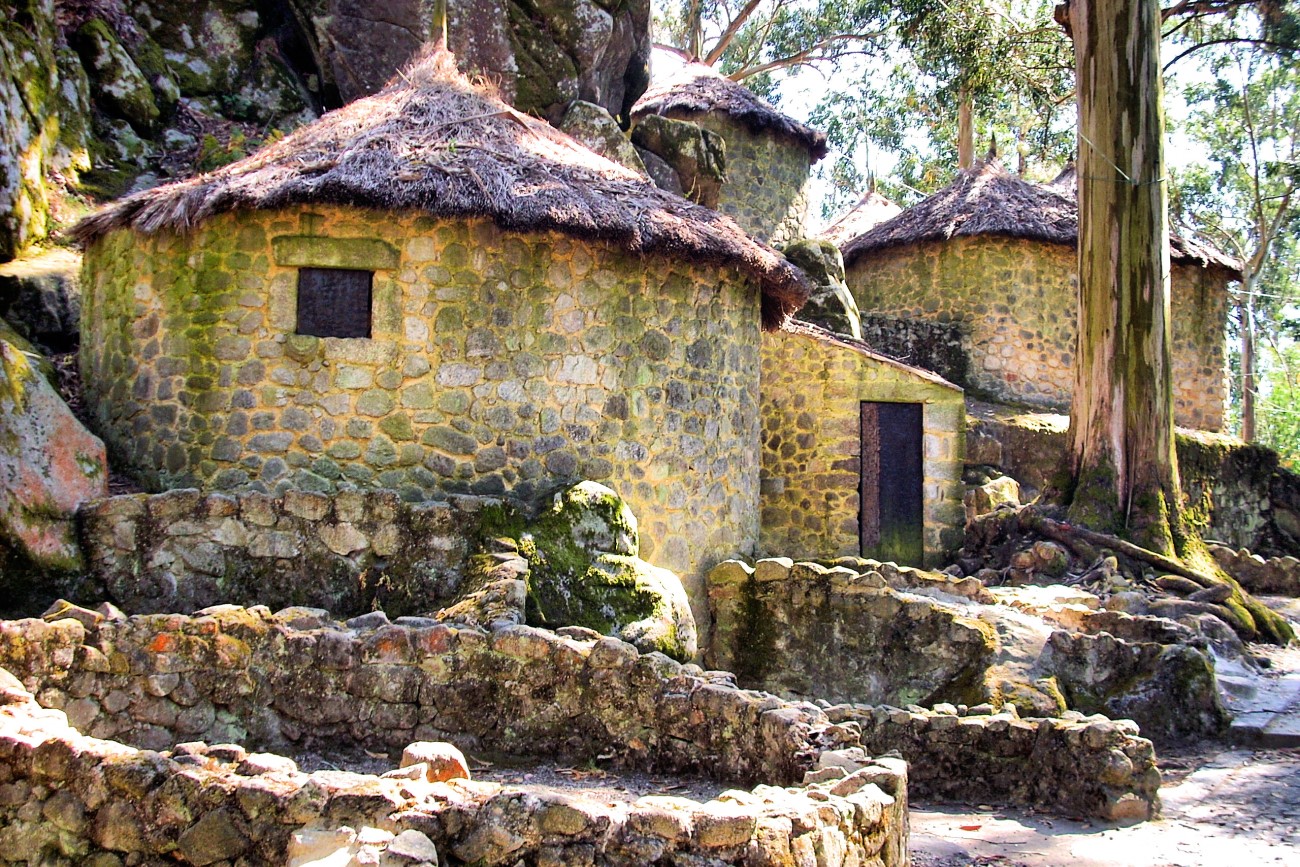 Castro de São Lourenço​, a fortified village dating back to the 4th century BC, Esposende, Portugal

As you approach the coast of Esposende, the first beach you’ll find is  ​Praia Suave Mar​. Also called Praia do Esposende, it's one of the many beaches located within the Litoral Norte Protected Landscape. Backed by low sandy dunes, this beach offers a few cafés were you can stop for a drink. 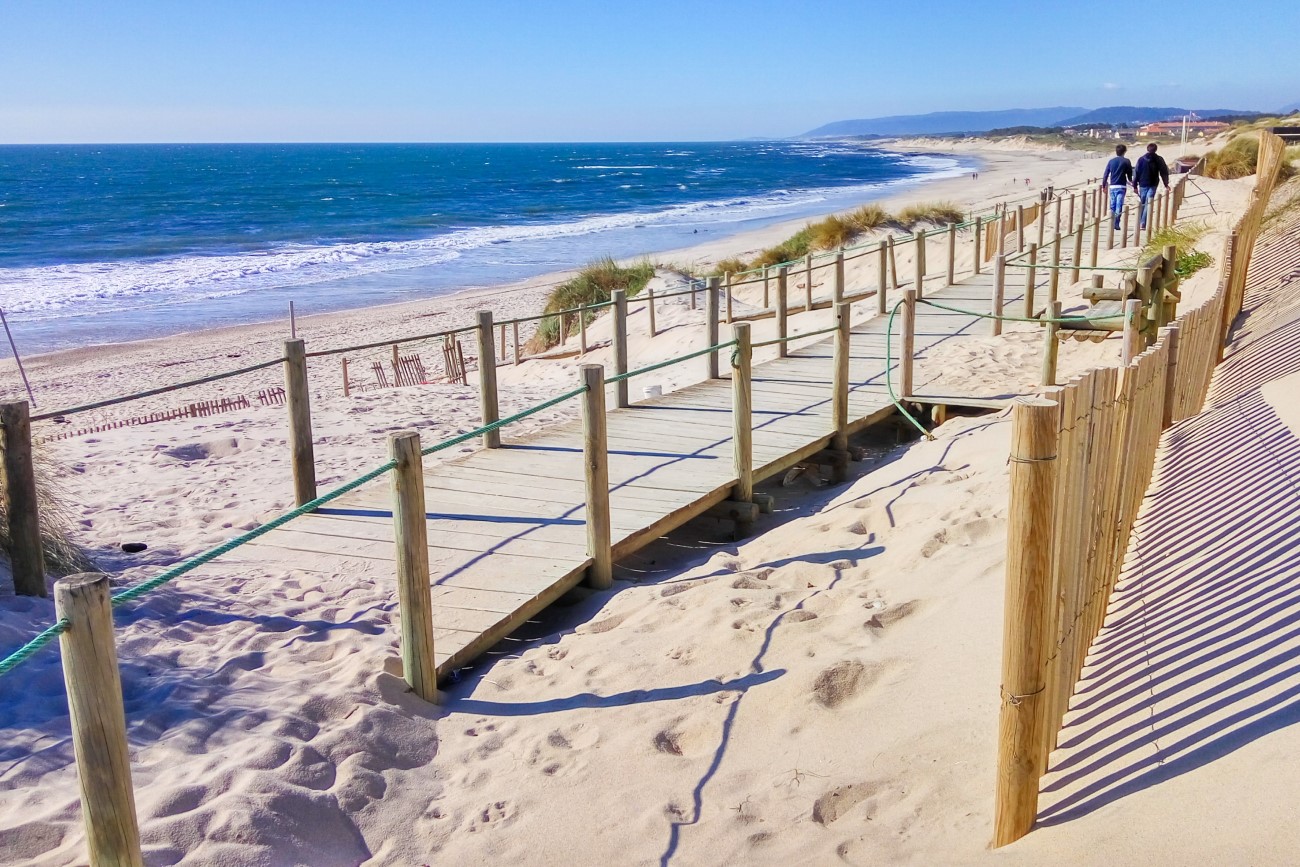 From here, you can walk to the ​Forte de São João Baptista​, a fortress built between the 17th and 18th century which overlooks the beach and the Cávado river.

There are a few other beaches in Esposende that deserve a visit such as Praia de Ofir, Praia da Apúlia and Praia da Ramalha. ​Praia de Ofir​ is popular among surfers, and there’s a surf school on site for those who want to learn the sport. 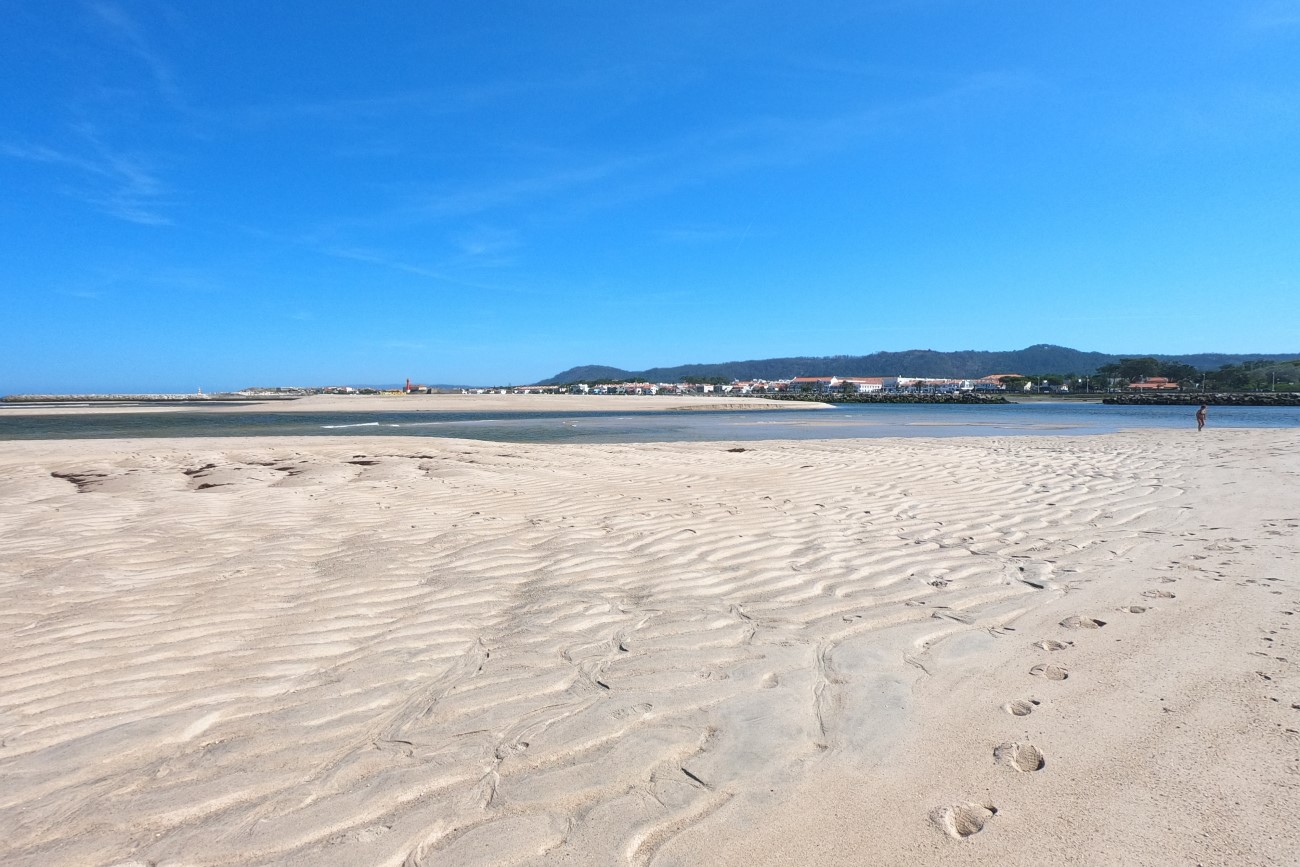 When the tide is low, you can spot the Cavalos de Fão, a natural rock formation rising amid the sea. Further down is the ​Praia da Apúlia​, a large beach surrounded by dunes and old windmills that deserve a capture. ​ 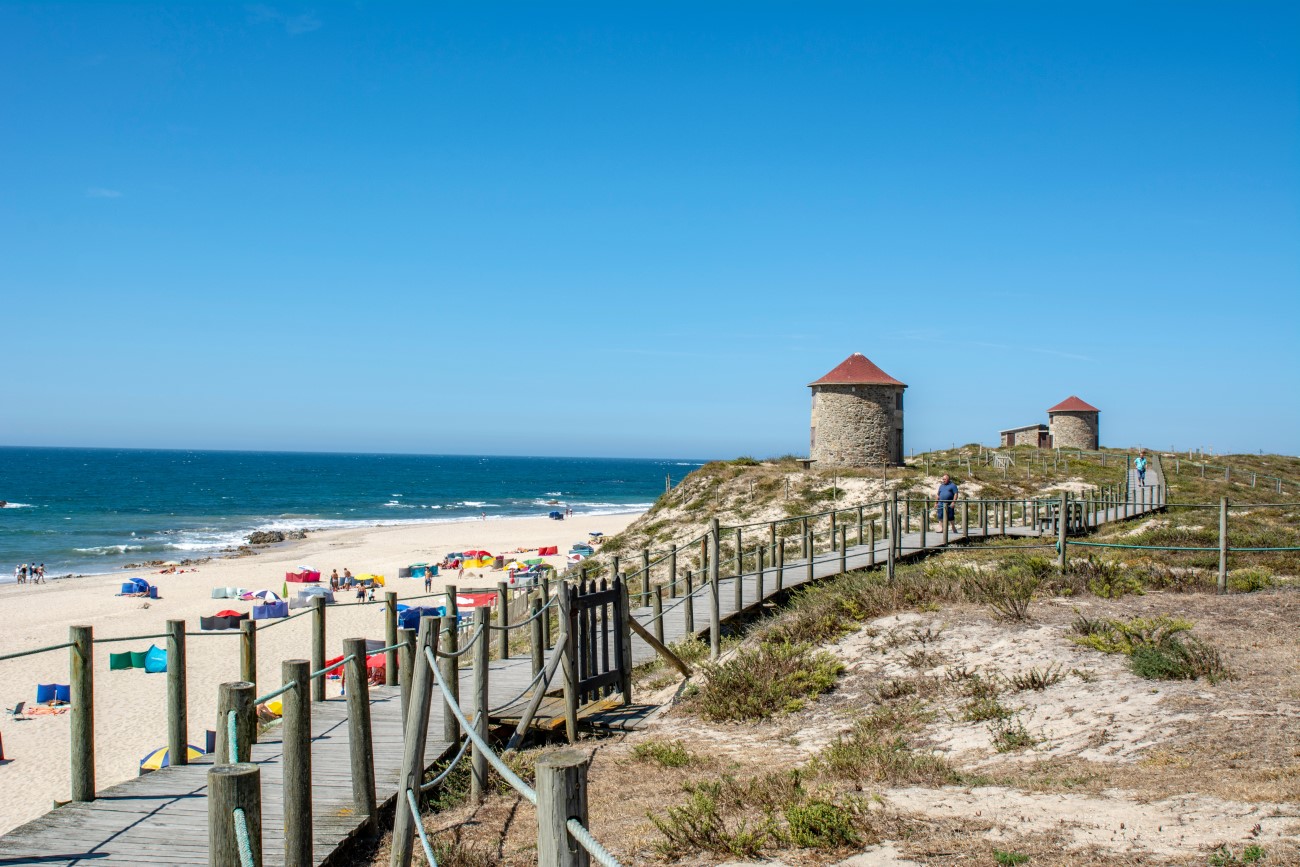 Praia da Ramalha​ is a bit calmer and offers plenty of space to practise beach volleyball or football.

If you’re visiting Esposende in the winter or prefer to swim in warmer waters, you can head to the Piscinas Foz do Cávado​. This public pool complex features two seasonal outdoor pools and an indoor pool open all-year-round. It releases waves every hour, making you feel like you’re in the ocean.

You can also take the opportunity to wander around the natural park itself. Follow the trails on foot or rent a bike and enjoy the views of the landscape. Keep your eyes open as you might spot herons or otters, especially near the river.

From Esposende, we headed south to Póvoa de Varzim. This fishing town has been welcoming visitors to its beaches since at least the 19th century. Once sought-out for its curative seaweed, Póvoa de Varzim has transformed into a modern city entertaining tourists with its casino and golf course. 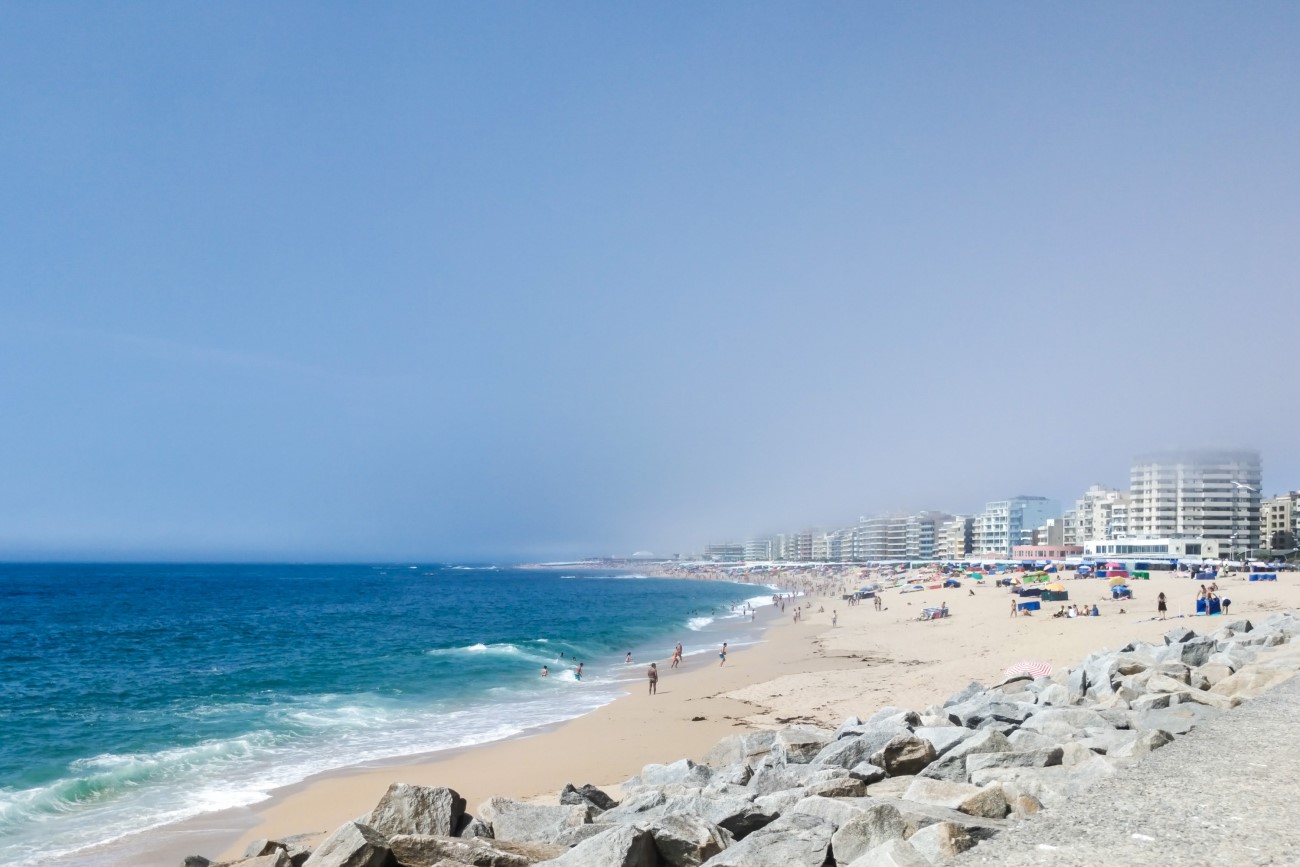 Before we reached the city, we passed by ​Monte de São Félix​, the highest hill of Póvoa de Varzim at 202 metres high. Up here, there’s a sanctuary, windmills and the ruins of a pre-Roman village. A long stairway leads the way to the top, but you can also drive here. Whichever way you go, you can expect fantastic views over the town and its woods.

Stretching for around 10km, the coast of Póvoa de Varzim features a series of glorious beaches. In the north is ​Praia do Quião​, a quiet stretch with white sands and rocky outcrops emerging near the water. Close to the centre is ​Praia da Salgueira​, an urban beach that attracts many local surfers and bodyboarders. After that, comes ​Praia do Carvalhido​, a small sandy bay occupied by striped beach tents in the summer. Then there's ​Praia Redonda​, a popular choice among families living in the North of Portugal. Behind these last three beaches is the Avenida dos Banhos, a long promenade with plenty of cafés and restaurants.

After touring the beaches, you can explore some of the city’s main landmarks. Set between the beaches and the harbour of Póvoa de Varzim is the ​Painel dos Azulejos​, an impressive tile panel designed by Fernando Gonçalves in 2004. It includes scenes from the city's past focusing on its fishing traditions.

Nearby is the ​Fortaleza Nossa Senhora da Conceição​, a military stronghold dating back to the 18th century which protected the city from invaders. Inside the fortress are now two restaurants which provide great sea views.

Praça do Almada ​ is the city's central square, framed by colourful buildings and historical sites such as the town hall, a 16th-century pillory and a statue of the famous Portuguese writer Eça de Queiroz. 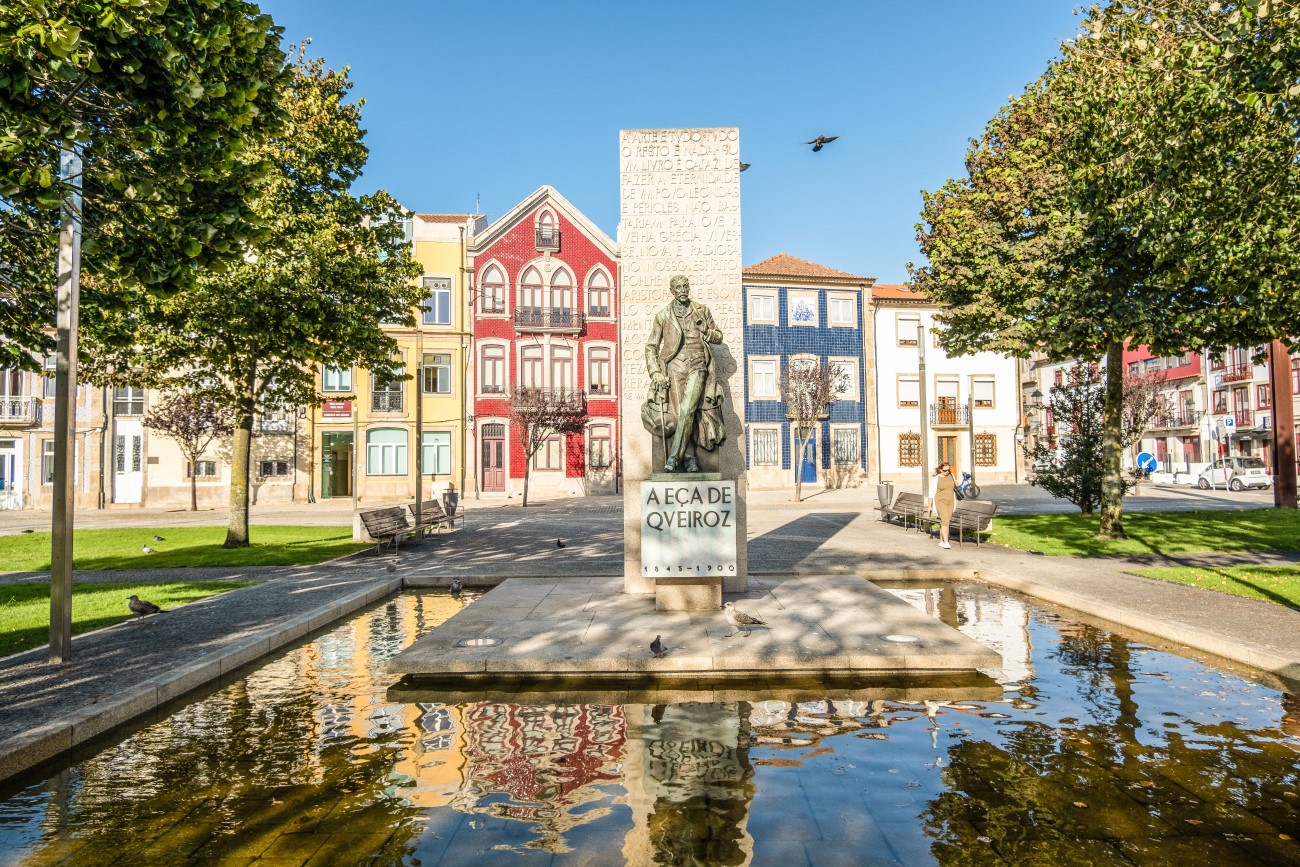 You can also pay a visit to the casino or spend some time at the nearby golf course. Open since the 1930s, ​Casino da Póvoa​ offers many gaming facilities, as well as a restaurant, four bars and a theatre which hosts several events throughout the year. Golf fans should drive up to the ​ Estela Golf Club​, a links golf course with 18 holes overlooking the ocean. 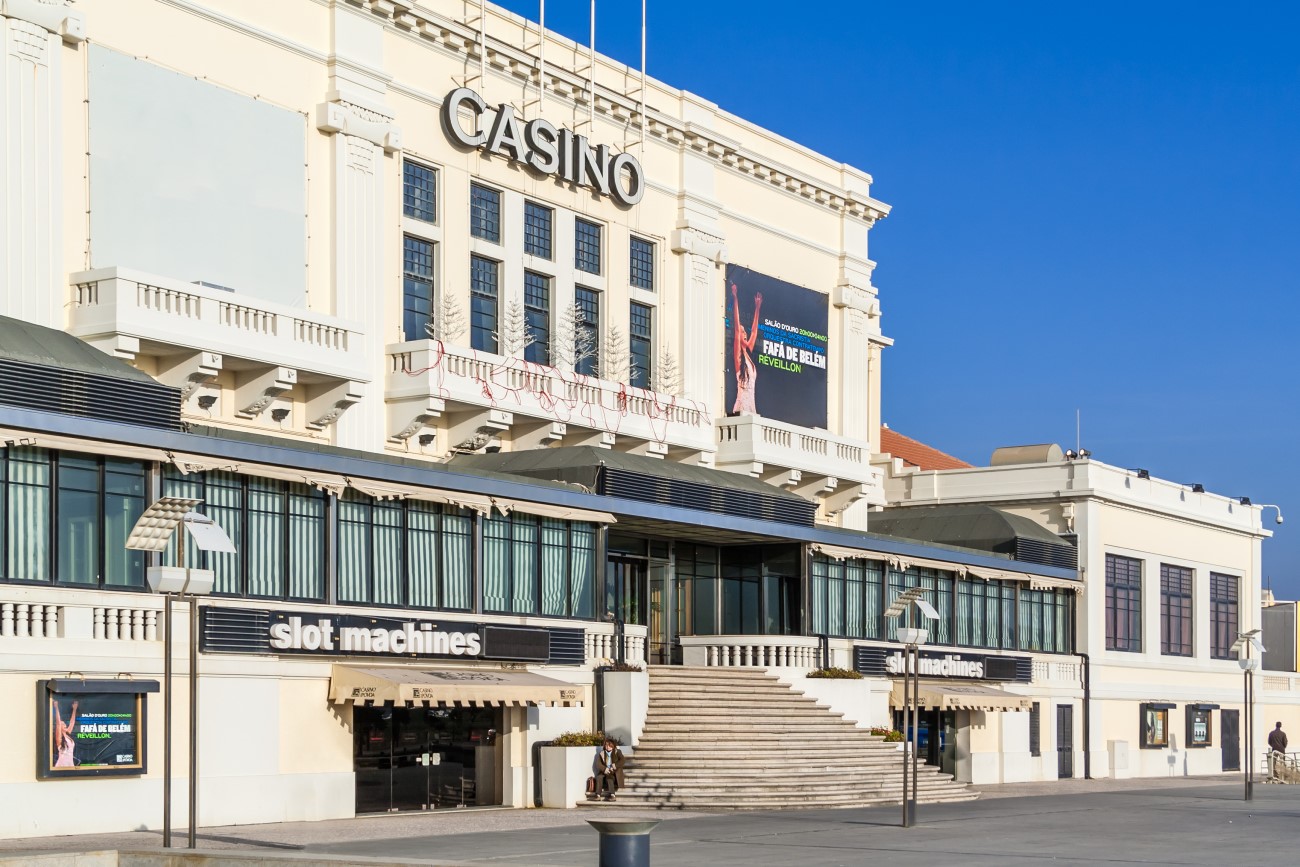 Following Póvoa de Varzim, we continued down to Vila do Conde. Standing amid the ocean and the Ave River, this coastal city has a fascinating maritime history. Back in the Age of Discovery, it was a ship building port, and visitors are reminded of this today when visiting its museums. Of course, most people head here for the beach, and there a plenty of those too. Even if you don’t have a car, you can take the subway directly from Porto. 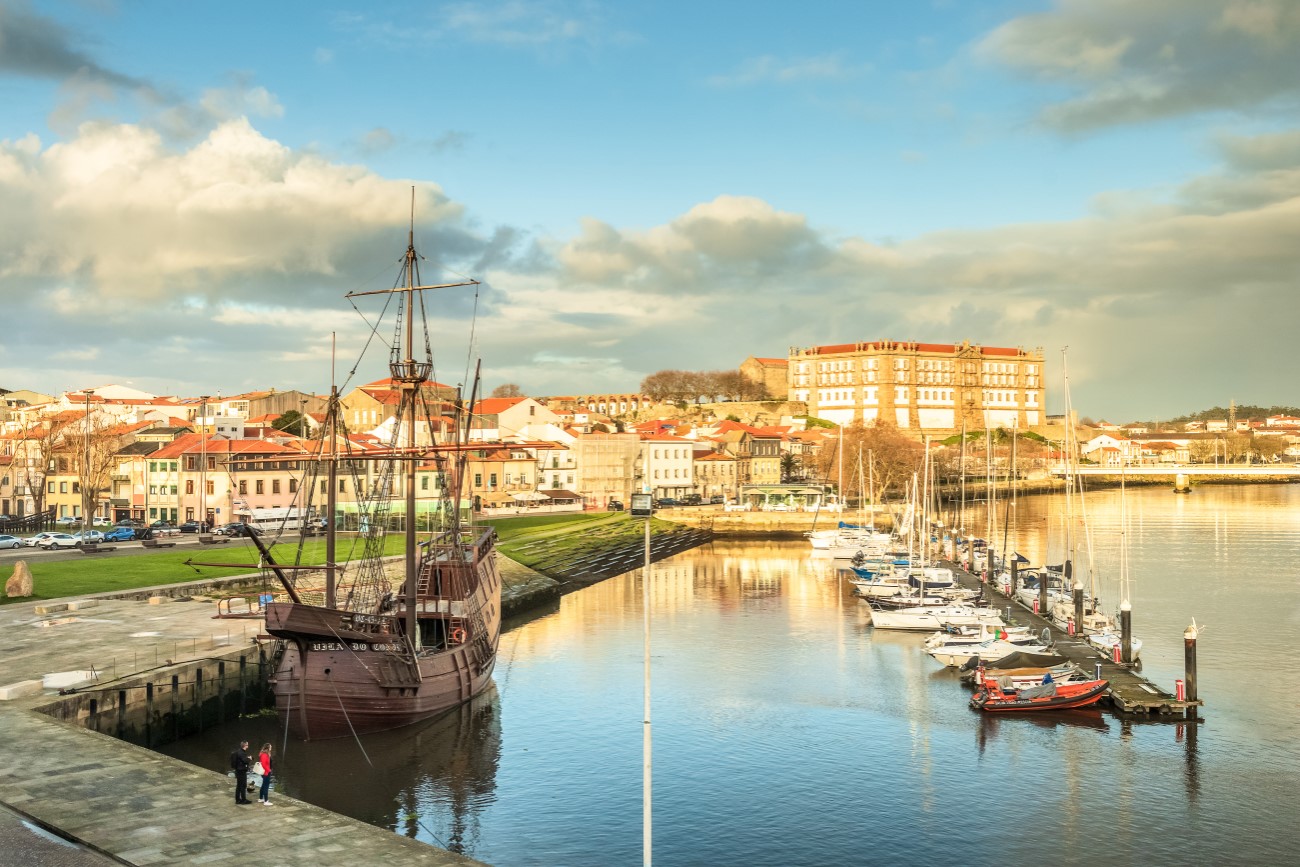 Attractions in Vila do Conde

As we made our way to the city, we spotted the ​Aqueduto de Santa Clara​, a 17th-century aqueduct which connects Póvoa de Varzim to Vila do Conde. Attached to this monument is the ​Convento de Santa Clara​. Founded in the 14th century, it was among the largest feminine convents in Portugal. You can still see its original Gothic structure with its granite walls and crenellated roof, but there's also a newer section built in the 18th century. 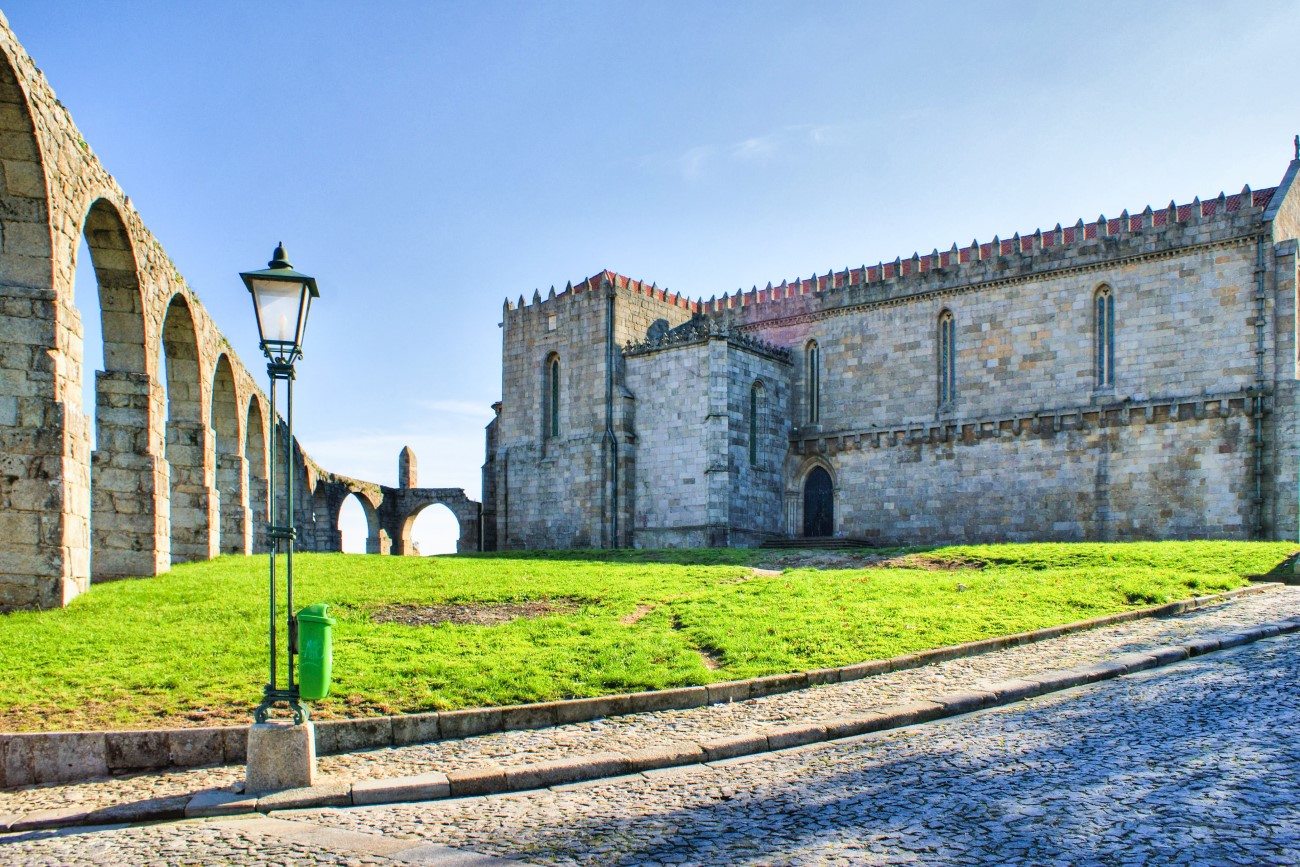 A few minutes away from the convent is the​ Casa Museu José Régio​. This house was owned by José Régio, a prominent Portuguese writer during the 20th century. Now converted into a museum, it's worth exploring its rooms decorated with ceramics, religious art and antique furniture.

From there you can walk to the ​ Igreja Matriz​, the city's parish church. Built between the 15th and 16th century, it's one of the most striking buildings in Vila do Conde. The outdoor façade stands out with its carved doorway typical from the Portuguese Gothic architecture, while the interior is mostly Baroque. 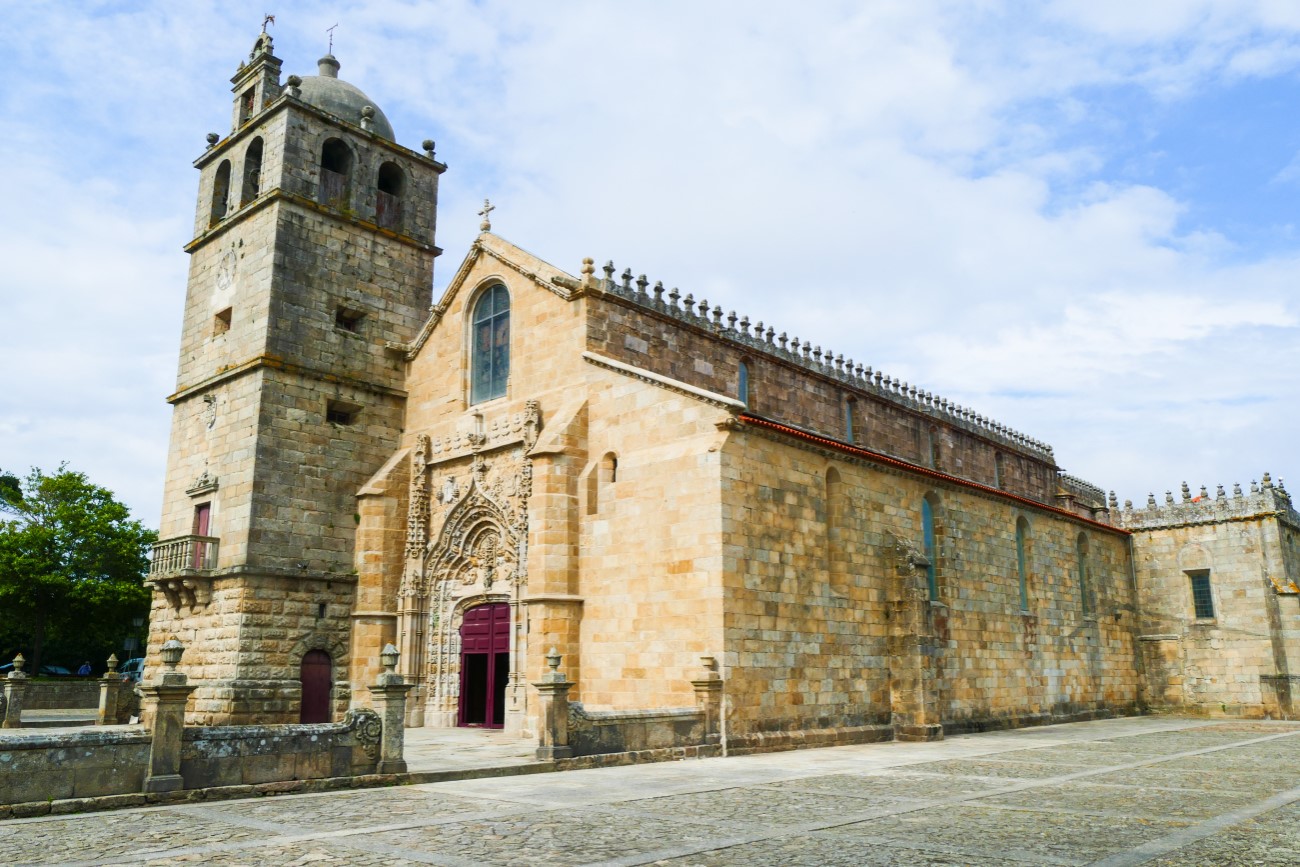 The Igreja Matriz​ or Church Matriz, the Main Church of Vila do Conde, Portugal

Nearby is the ​Museu da Rendas de Bilros​, a museum which showcases traditional lacework from this region and the tools used to produce it.

For a look into the city's maritime history, you can visit the ​Museu de Construção Naval ​or hop on the Nau Quinhentista​. The first one is a museum dedicated to the city's shipbuilding industry, the second is a replica of a 16th-century vessel which rests by the river.

Follow the river, and you'll soon end up at the ​Capela de Nossa Senhora da Guia​. This tiny whitewashed chapel dates back to the 17th century and hides a rich interior with fresco ceilings, tiled walls and a marble altar. 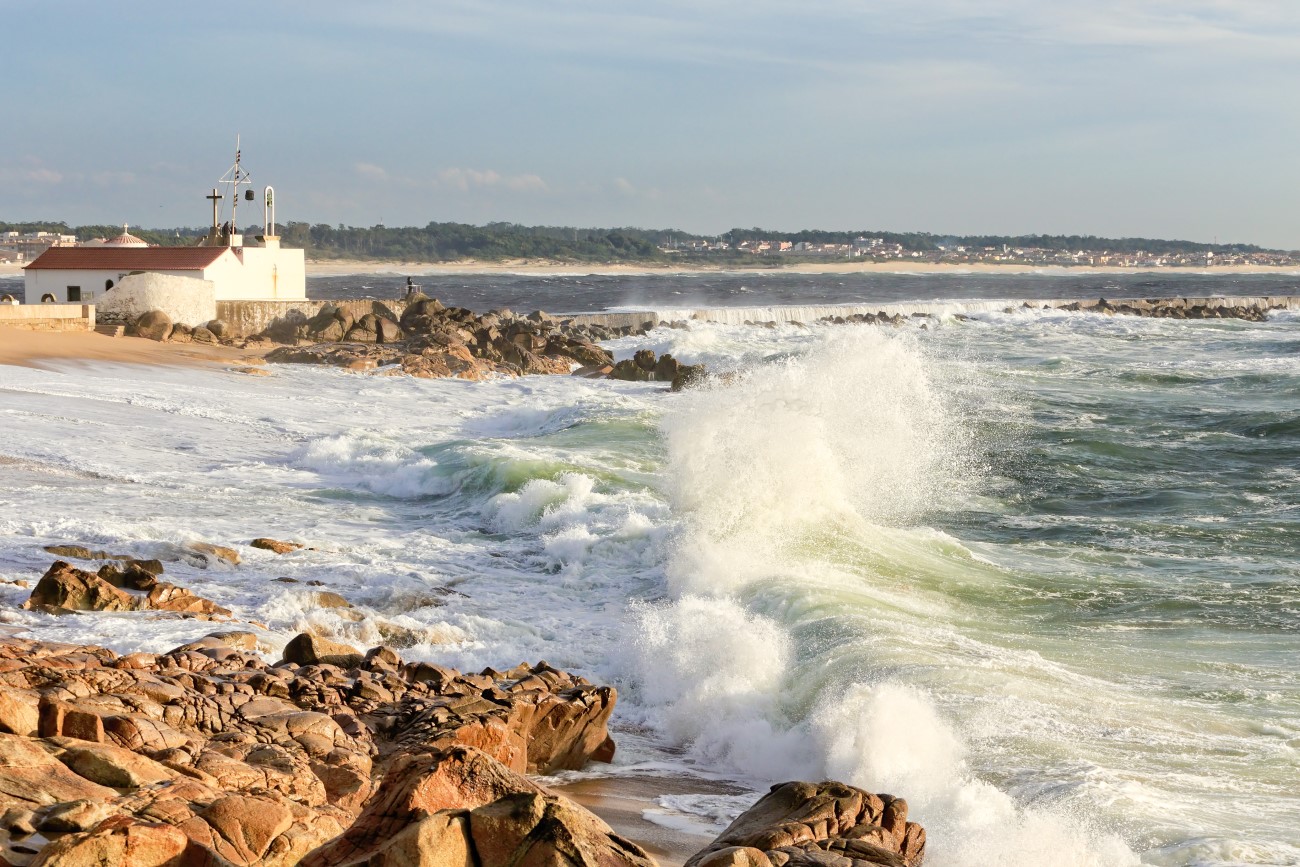 Not far from the chapel is the ​Forte de São João Baptista​, a 17th-century fort with a unique pentagonal shape rising amid the sand. For centuries, it was a strategic defence point protecting the city from pirate attacks, but in the 1980s it became a boutique hotel. Even if you're not staying here, you can still climb the walls and relish the views over the river and the ocean. 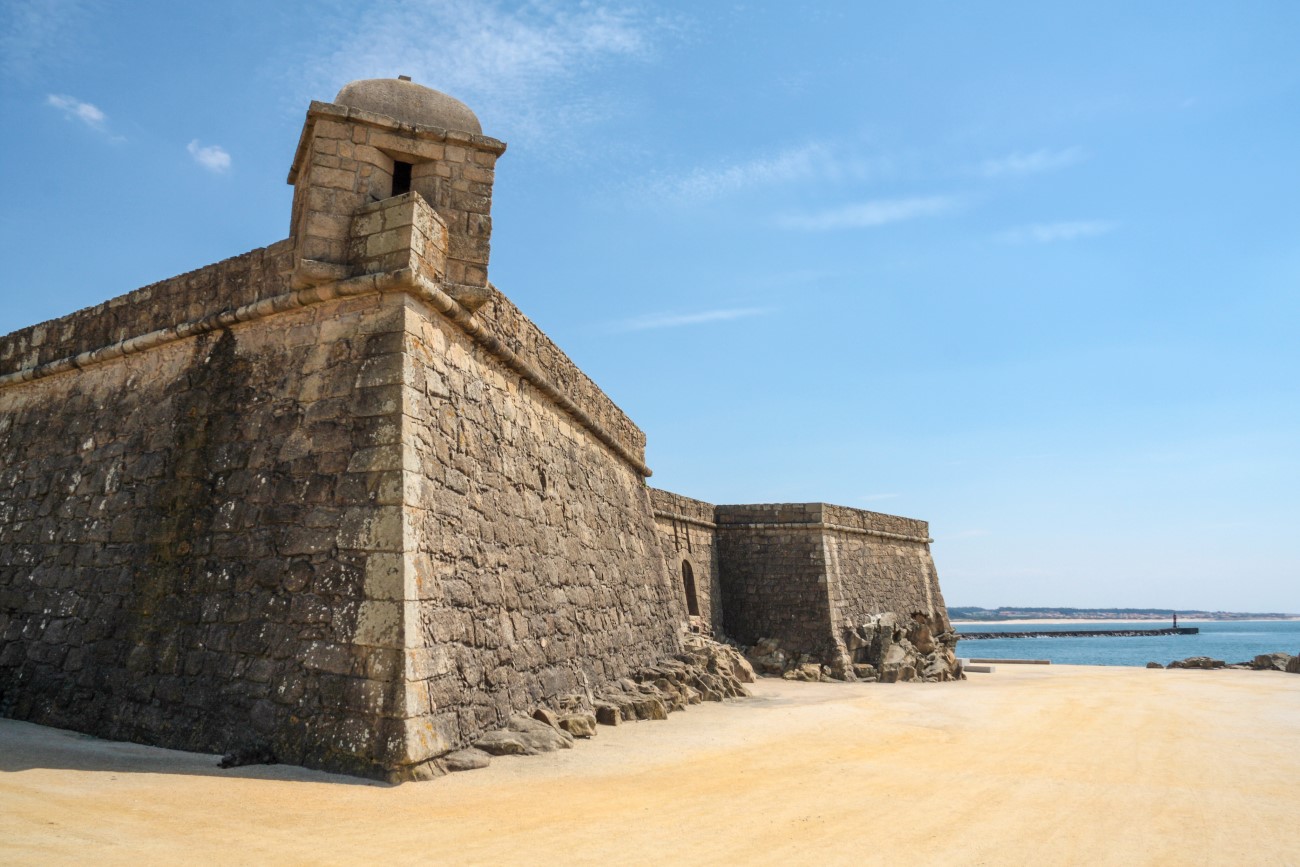 Beaches in Vila do Conde

Most beaches in Vila do Conde are located north of the river, these include, Praia do Forno and Praia Azul. ​Praia do Forno​ is the closest one to the city centre, and it's where you'll find the imposing Forte de São João Baptista. Next to it is the ​Praia Azul​, which offers perfect conditions for surfing. Running behind the beach is the Marginal Atlântica, a promenade that stretches up to Póvoa de Varzim.

South of the river are more remote beaches like ​Praia da Azurara​. Protected by dunes, this white sandy beach extends for several kilometres, so there's always somewhere to lie down. 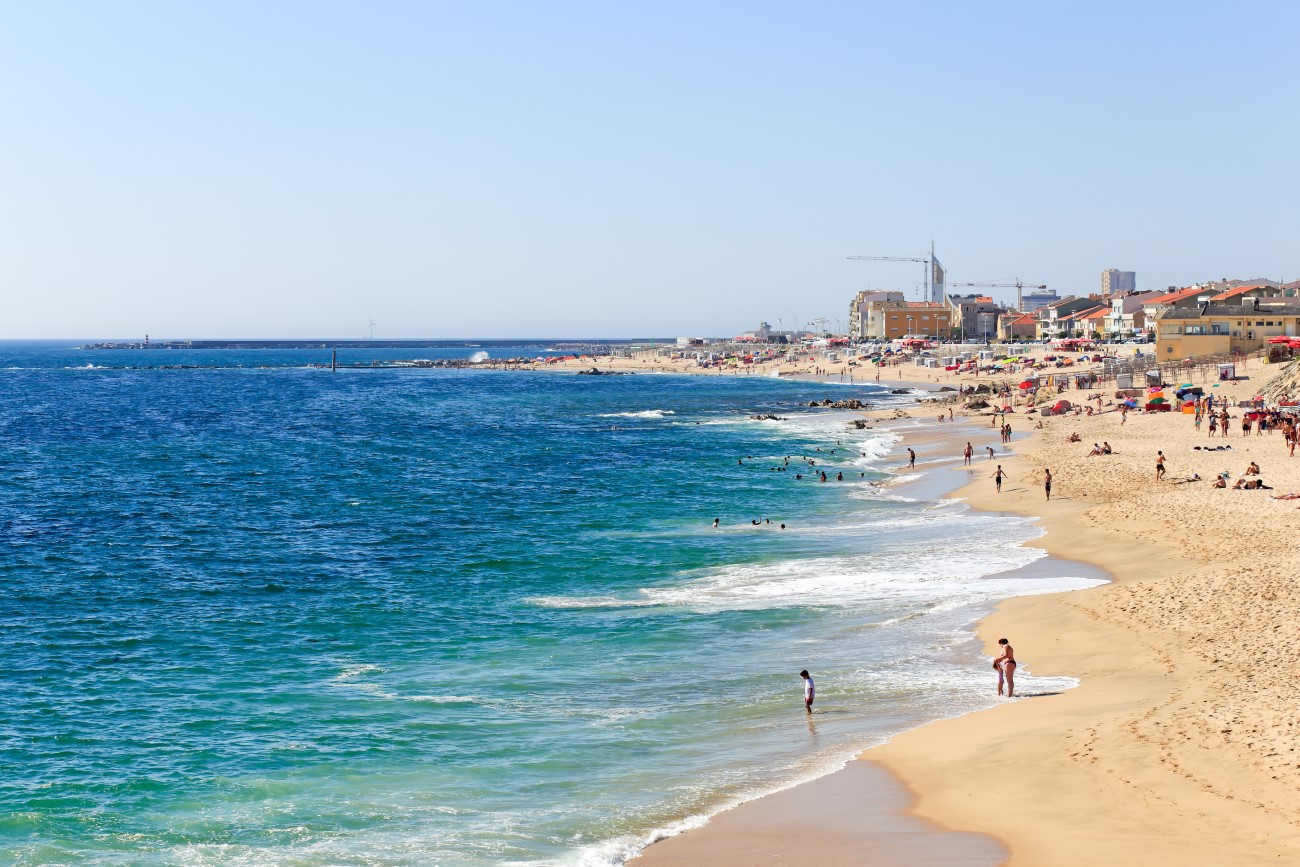 Beach near Vila do Conde, Portugal

Our last stop on the Costa Verde was Leça da Palmeira. Part of the Porto district, this seaside town is famous for its striking architecture and beaches. 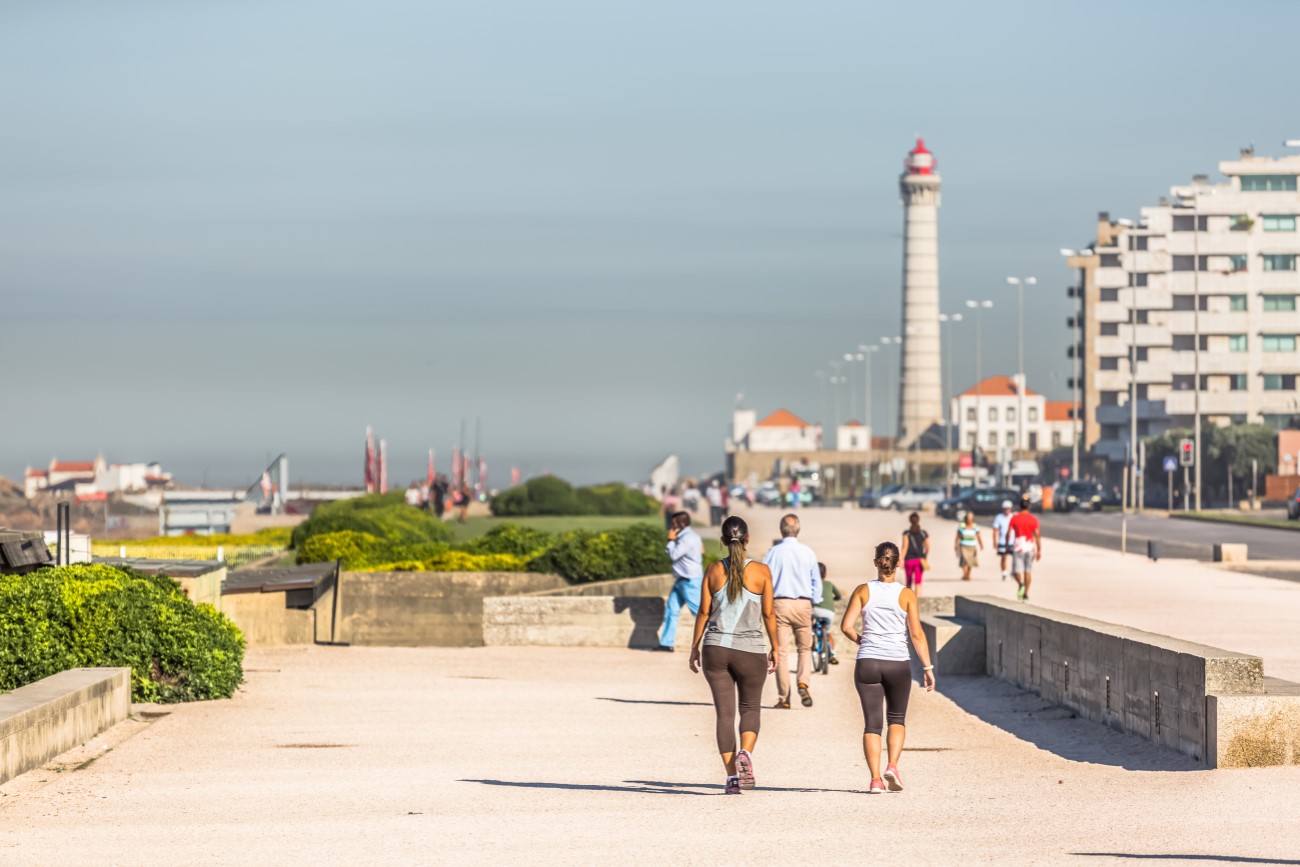 Driving down from Vila do Conde, the first beach to come up is ​Praia do Aterro​. Surrounded by lush vegetation and with a vast sandy stretch, it's the perfect place to relax. Just next to it is Praia Azul​. Also known as Praia da Conchinha, this small bay is surrounded by rocky outcrops. To the left of the beach, standing on a headland, is the ​Capela da Boa Nova​, a 14th-century chapel that once belonged to a Franciscan monastery. The interior is pretty low-key, but the ocean views outside are worth capturing. 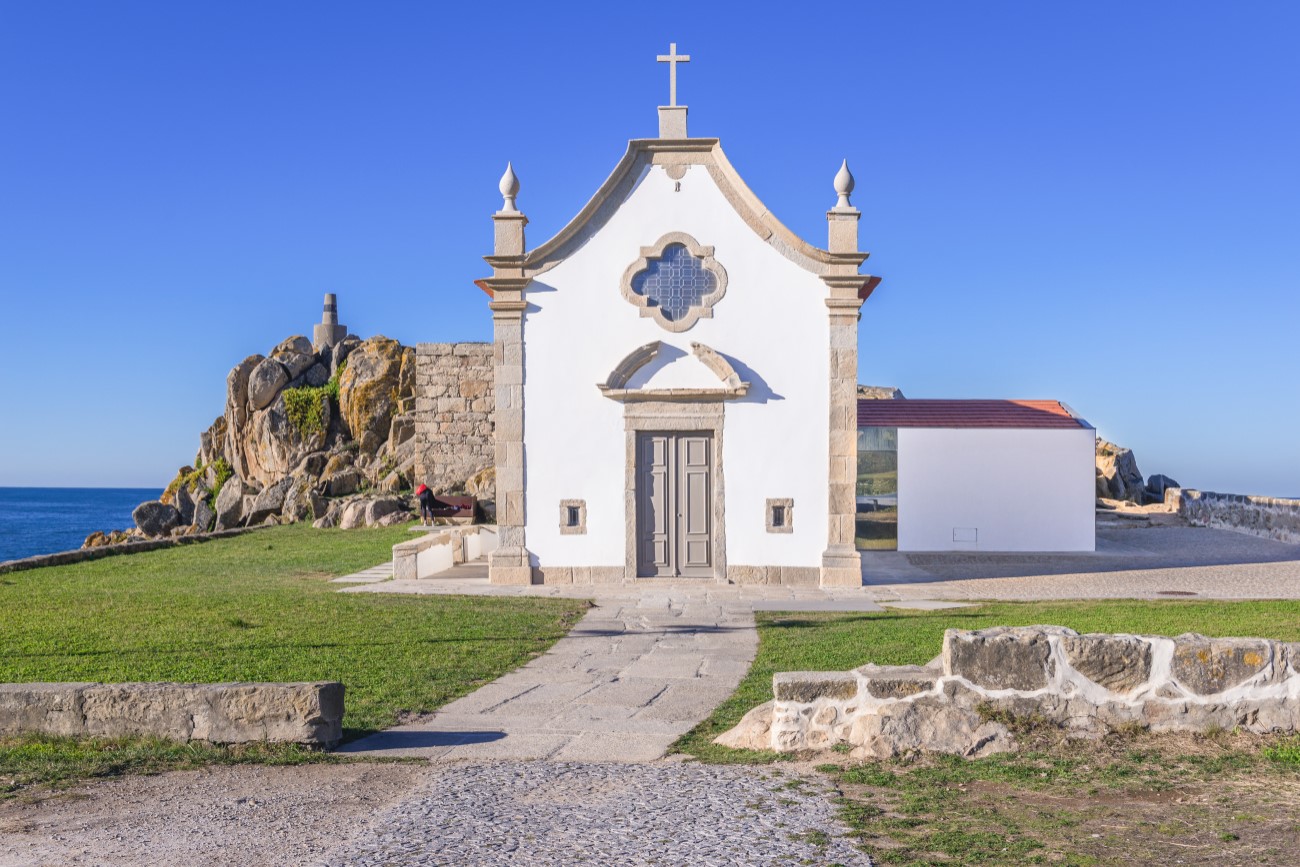 Contrasting with the chapel is the ​Casa de Chá da Boa Nova​, a Michelin-star restaurant housed in a beautiful contemporary building designed by Portuguese architect Siza Vieira. Close by is the ​Farol da Boa Nova,​ one of the tallest lighthouses in the country established in 1926. 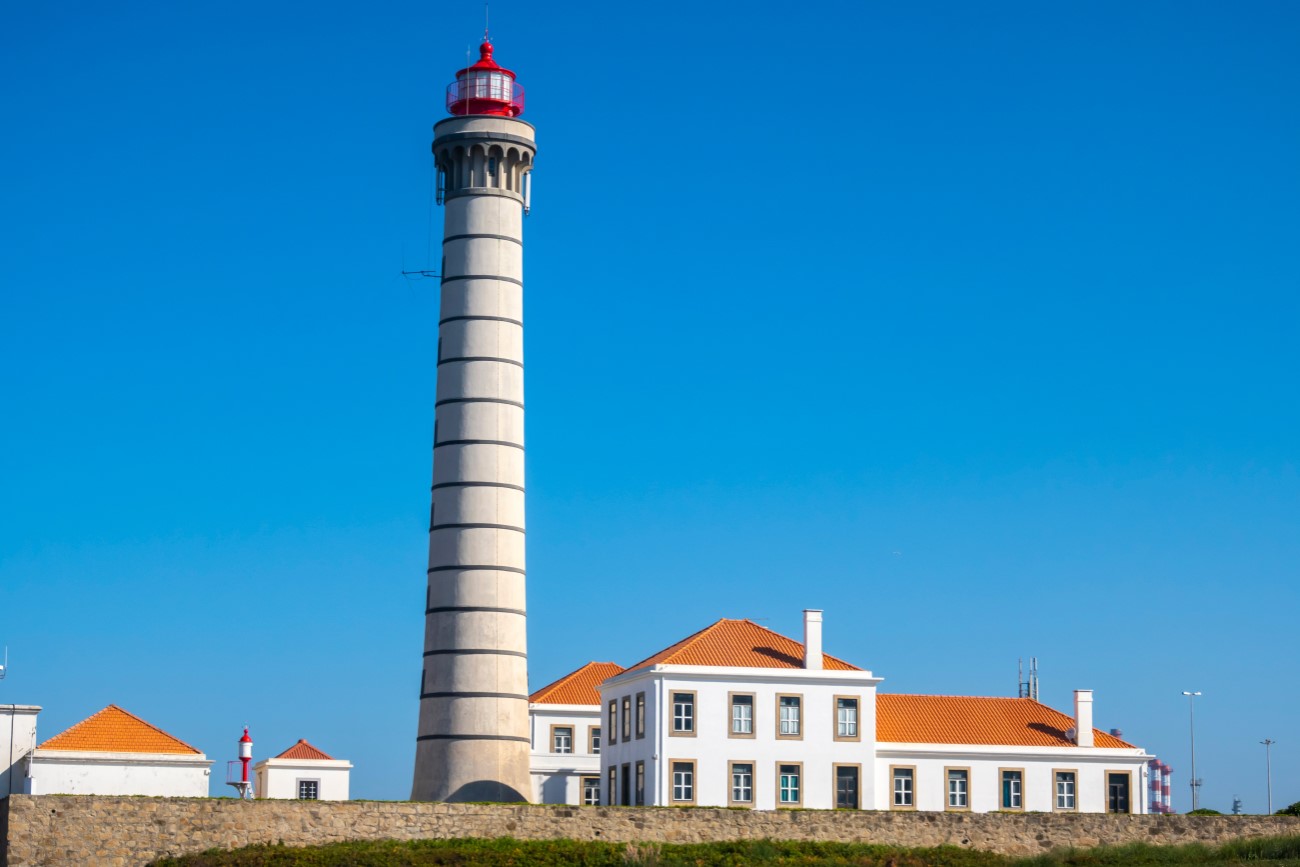 Head further south, and you’ll soon be at the ​Praia Leça da Palmeira.​ This beach has a long sandy stretch which goes all the way to the marina, making it the closest beach to the town centre. There are two cafés on the beach and many more in the surrounding area. One of the highlights of this beach is the Piscinas de Marés, ​two saltwater pools rising from the rocks also designed by Siza Vieira. Its calm waters are ideal for families with kids. Near the beach is the sturdy ​Forte Leça de Palmeira​, a 17th-century fortress that now houses the offices of Porto de Leixões. 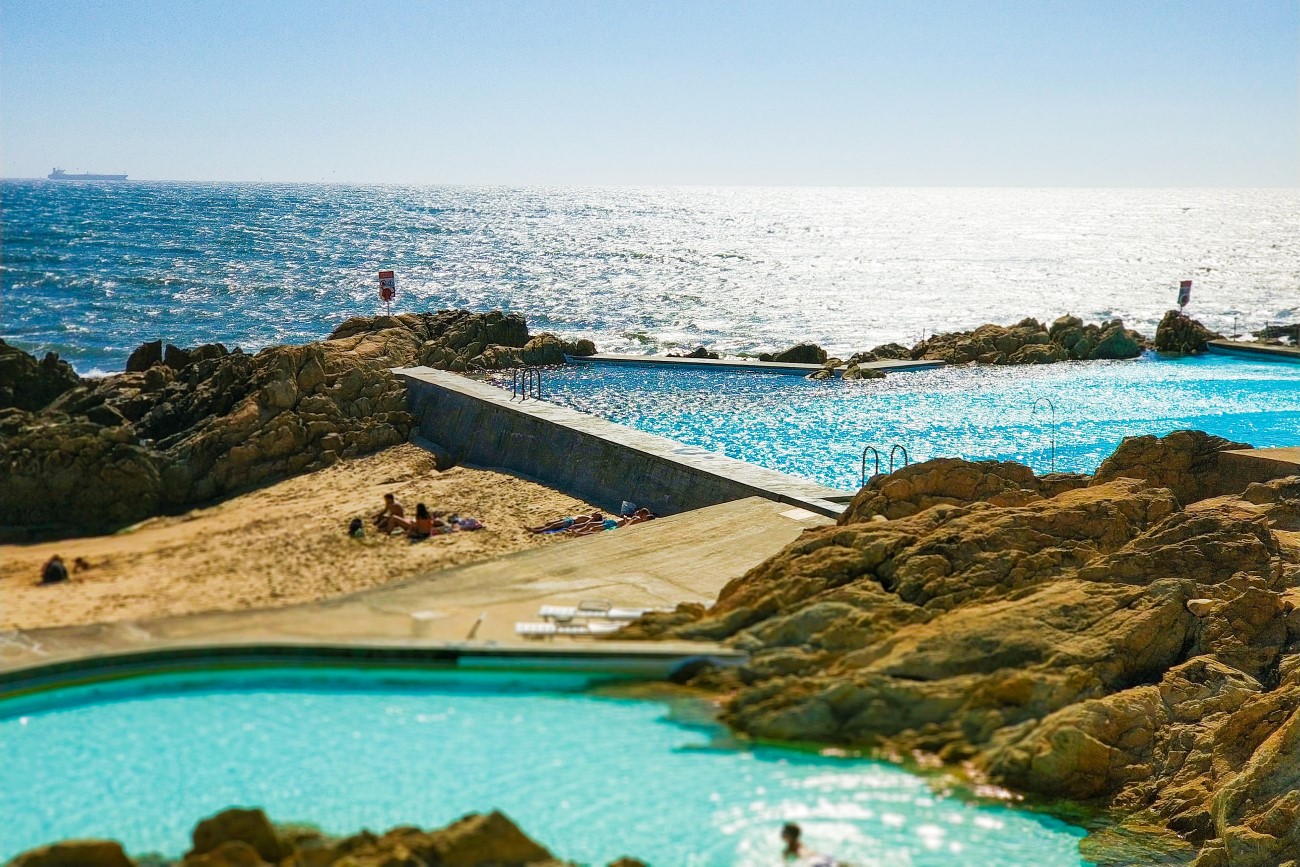 Before heading to Porto, we made one last stop at the ​Parque da Quinta da Conceição​. This public park was once home to a Franciscan convent, and you can still see the remains of this as you wander through its leafy paths today. The roofless cloisters, the stone fountains and the vine-covered Manueline doorway are a few elements that you can’t help noticing when you visit.

If you’re interested in exploring more in Costa Verde, you can check our guides about Viana do Castelo, Porto and Aveiro.