What to do in Viana do Castelo

Set between the Lima river and the Atlantic ocean, you'll find the historic city of Viana do Castelo. In the Age of Discovery, Viana was a departure point for Portuguese explorers and, later on, it became a port for codfish trade. This connection to the sea is still visible today in the city's traditional cuisine and museums, like the Museu do Traje and the Gil Eannes ship.

The old town is full of historic buildings, but the real draw for visitors is the dramatic views from the Monte Santa Luzia. At the top of this hill lies an imposing neo-Byzantine sanctuary and the ruins of an Iron Age village, reached via a funicular.

There are also several beaches near the city, where you can go for a swim or practise watersports like surf and bodyboard.

If you're wondering what to do in Viana do Castelo, below is a guide with the main attractions in the city. At the end, we’ve included a section with the best restaurants and hotels, so you can make the most of your stay. 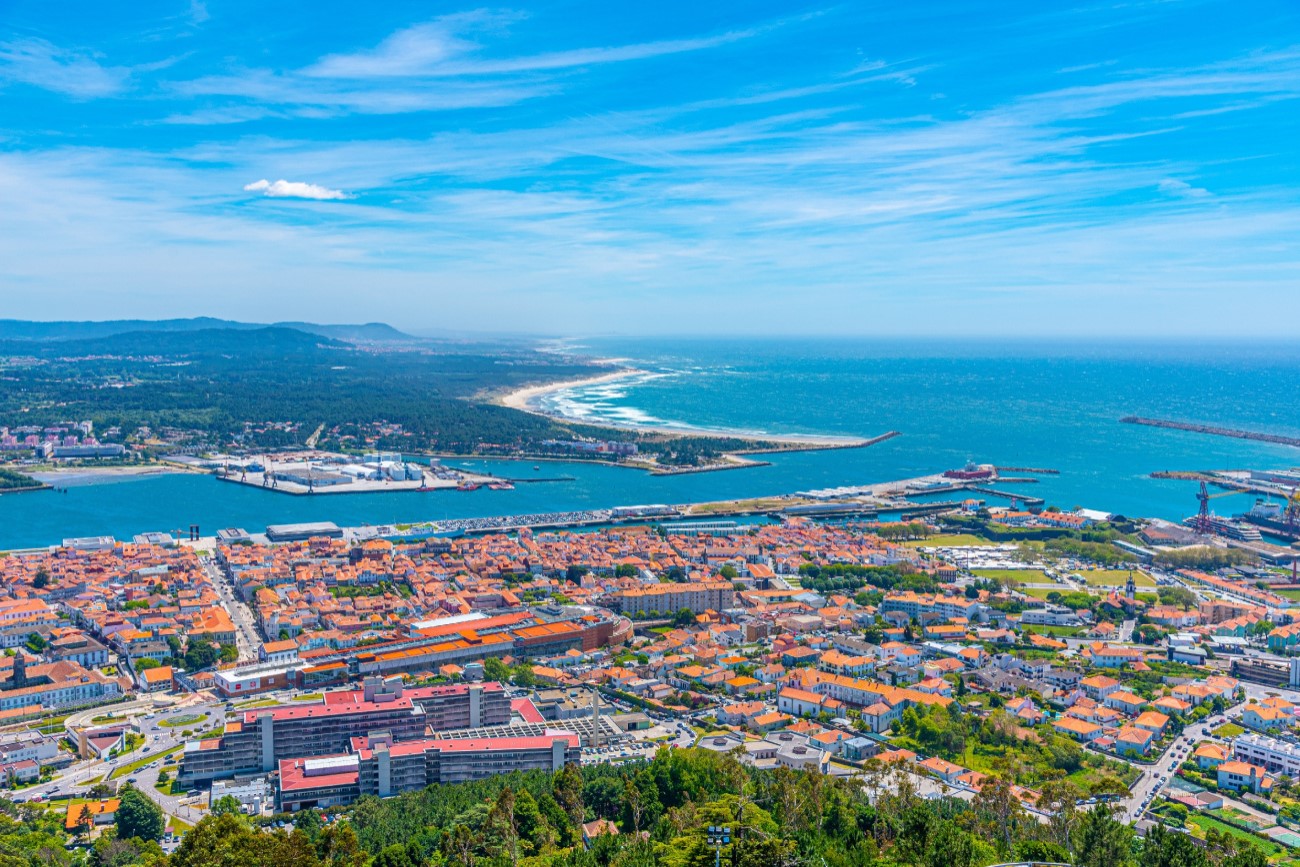 Aerial view of Viana do Castelo in Portugal

See traditional costumes at the Museu do Traje

As you arrive in the city centre, a striking yellow building immediately stands out. It houses the Museu do Traje, a museum dedicated to traditional costumes from Viana do Castelo. Inside you'll find a variety of clothes used by locals throughout the centuries for farming, fishing or special events like pilgrimages. Downstairs is a display of gold jewellery which is also typical of this region. 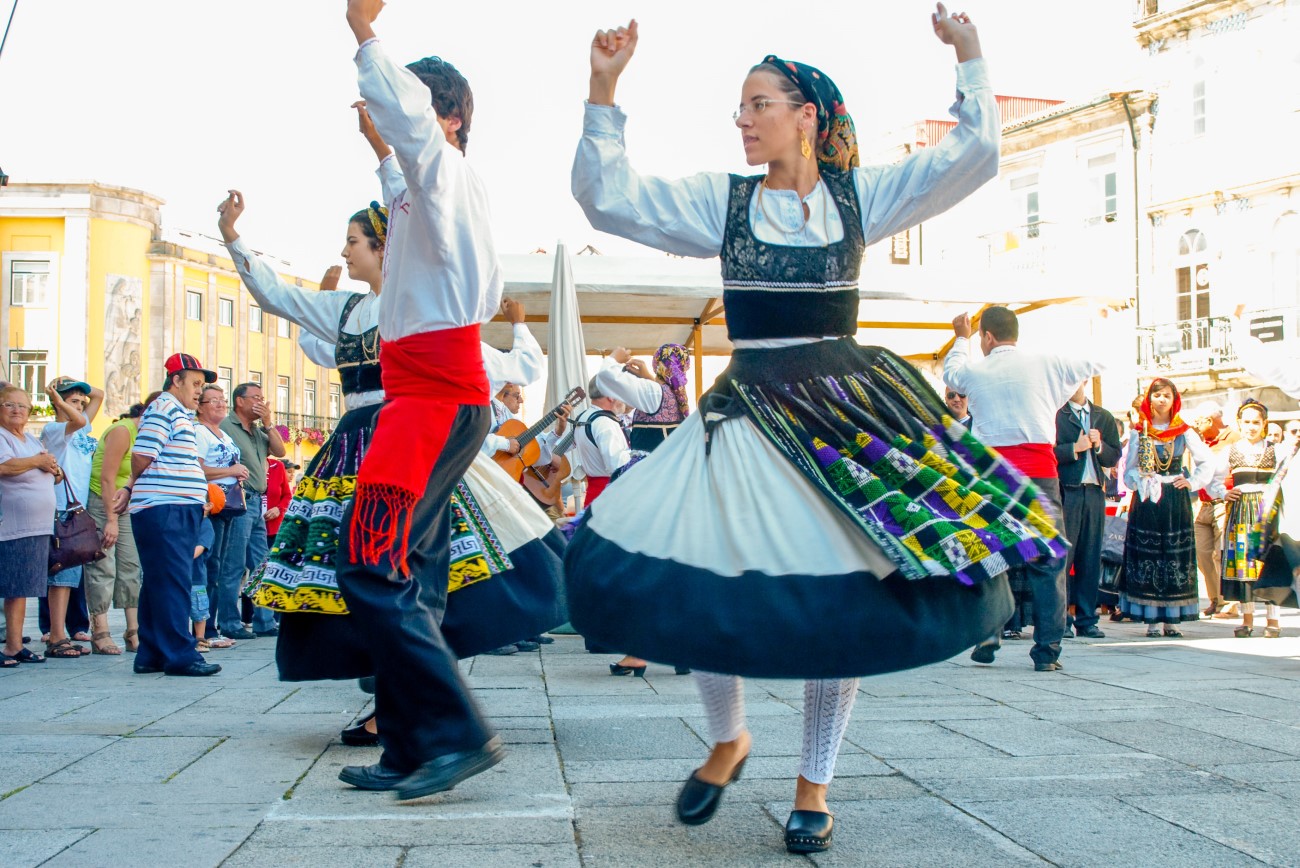 Dancers are wearing traditional costumes during the Summer festival in Viana do Castelo, Portugal

Just opposite the museum is the picturesque Praça da República, the central square of Viana do Castelo. It's here you'll find many of the city's landmarks such as the Chafariz, a Renaissance fountain built in 1554, the old city hall with its striking crenellated top and the 16th-century Igreja da Misericórdia. There are also a couple of cafés around this area so you can stop here for a drink. 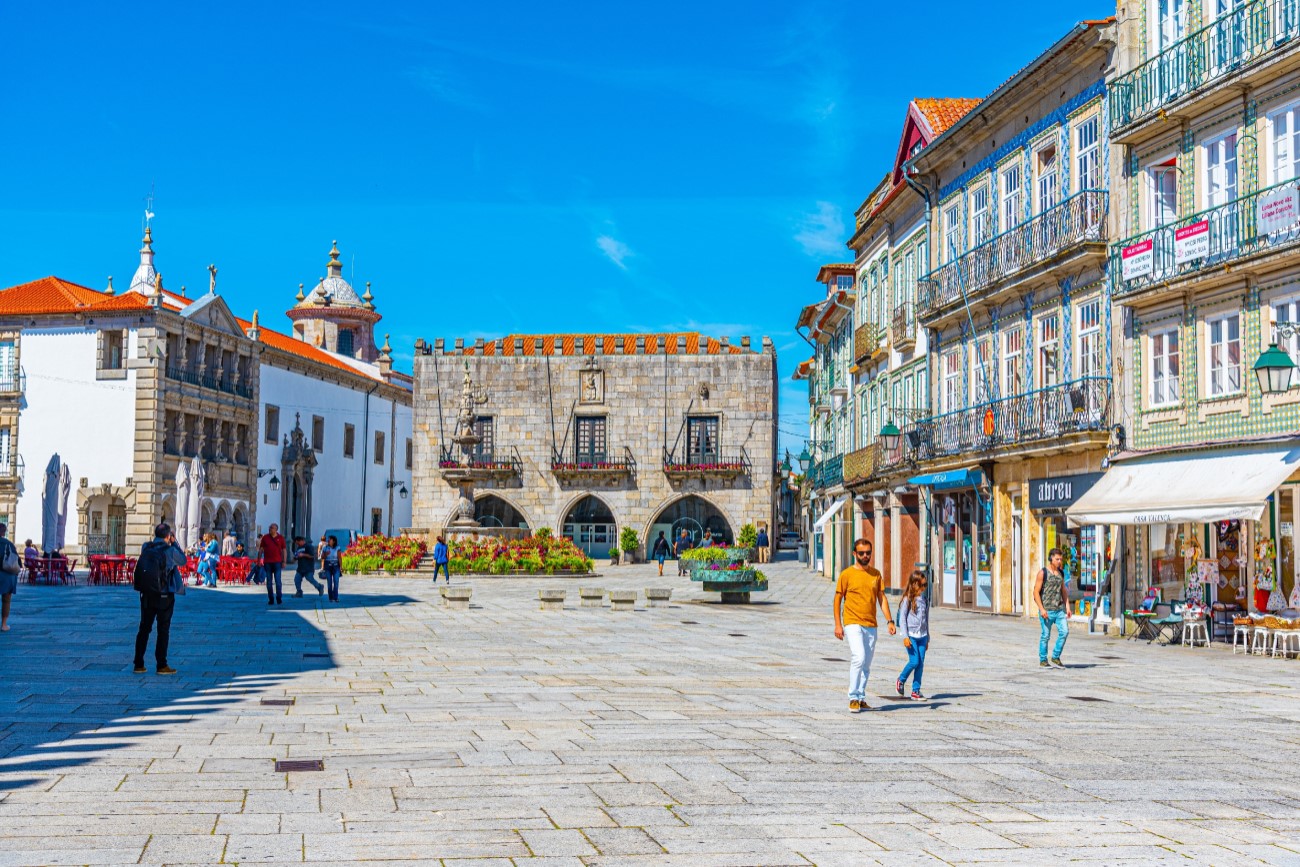 Praça da Republica square at Viana do Castelo in Portugal

From the outside, Igreja da Misericórdia stands out with its Renaissance façade and Venetian arcade. João Lopes, who worked on the square's fountain, also designed this magnificent church in the 16th century. It got renovated later on, giving its present Baroque interior, with hand-painted tiles covering the walls, gilded altarpieces and beautiful frescoes adorning the ceiling. 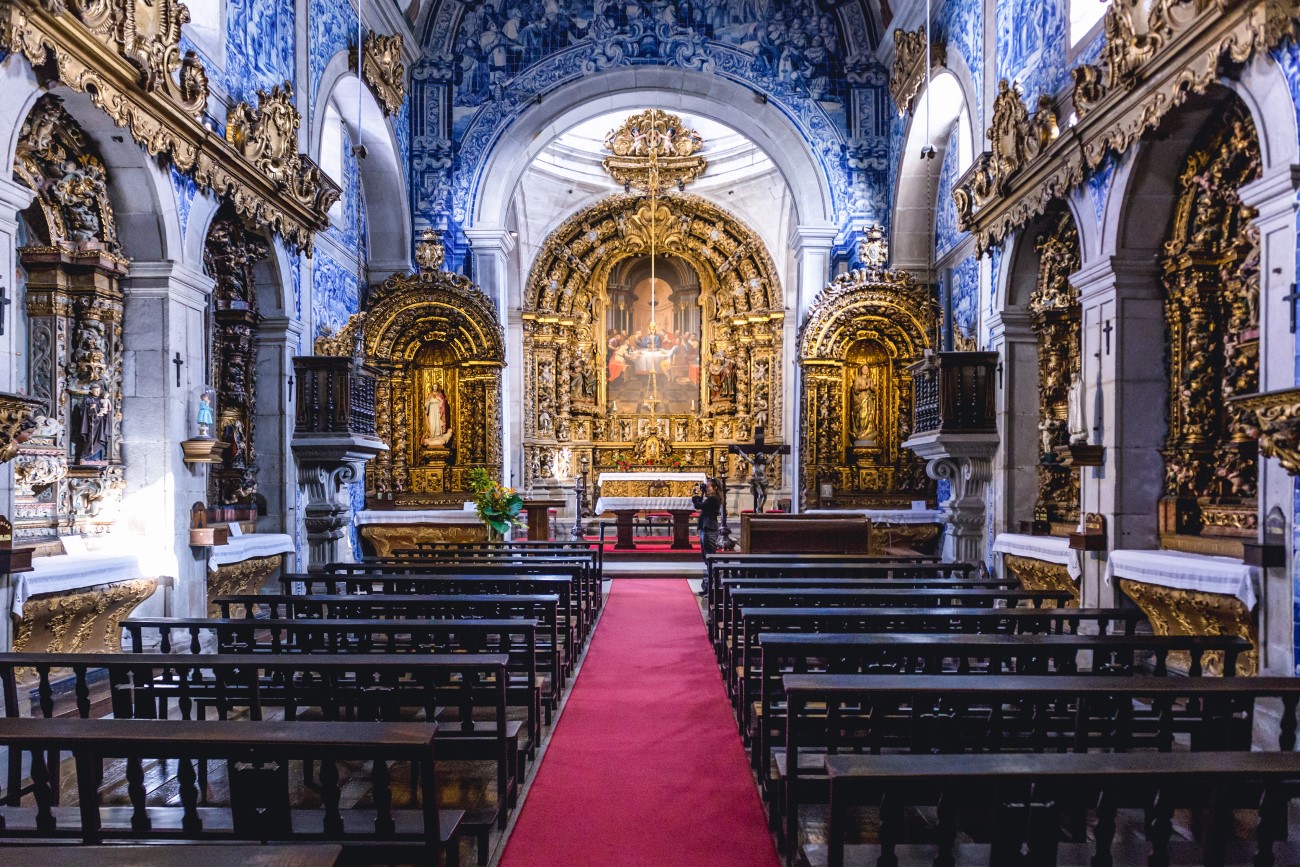 Interior of Church of Misericordia in Viana do Castelo, Portugal

Admire the Cathedral of Viana do Castelo

A few steps away from the square is the Cathedral of Viana do Castelo, also known as Cathedral of St.Mary the Great. This impressive church dates back to the 15th century, but went through several changes through the centuries, resulting in a mix of architectural styles. The original Romanesque towers give it a fortress-like exterior, and the Gothic doorway draws visitors with its beautiful stone carvings. Step inside, and you'll find a series of Renaissance-style chapels hiding below the vaulted ceilings. 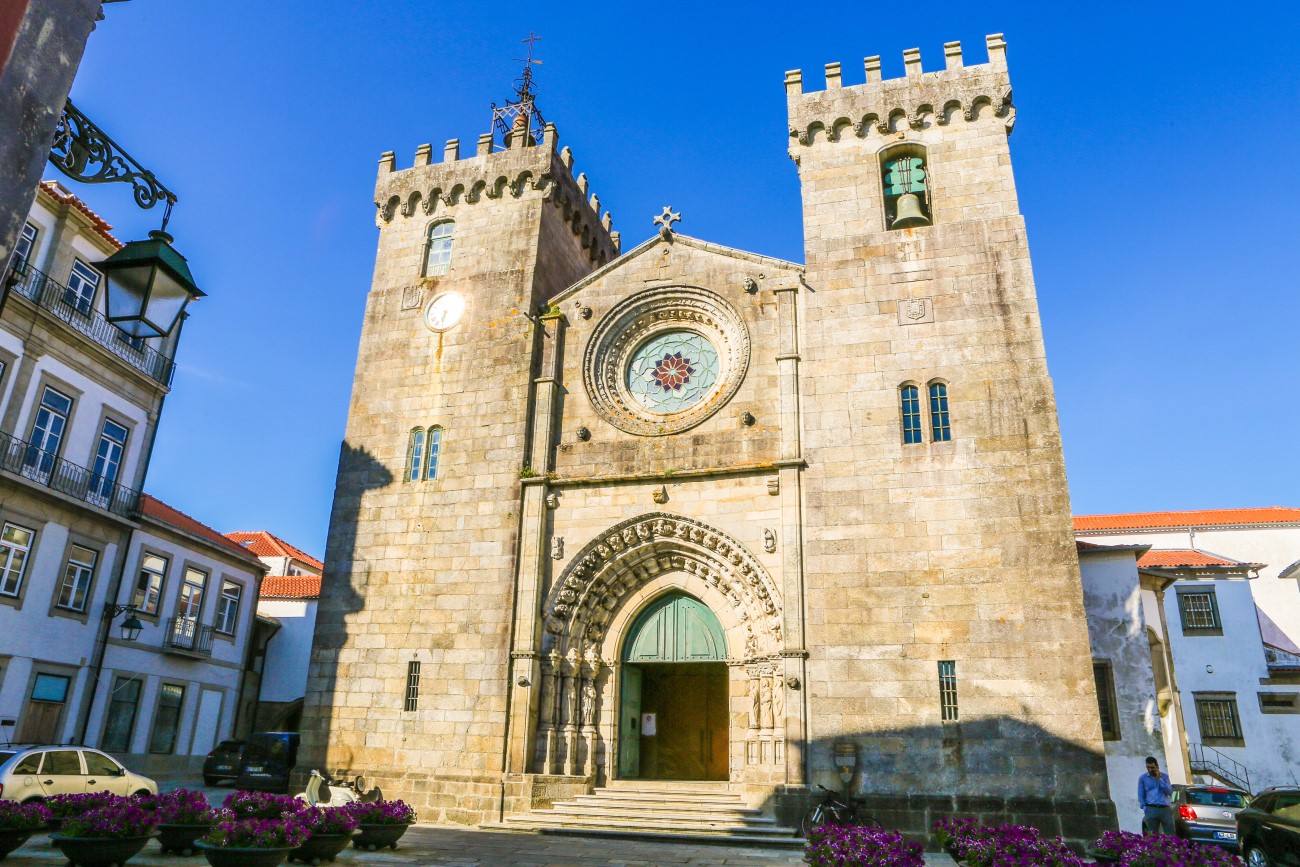 Families and chocolate fans will love this small museum in Viana do Castelo. Set inside a former chocolate factory, it includes a circuit of five rooms, using fun interactive features to explain the origins and the history of this sweet ingredient. The museum is part of a boutique hotel and if you want you can spend the night in a chocolate-themed room or treat yourself to one of their chocotherapy treatments. 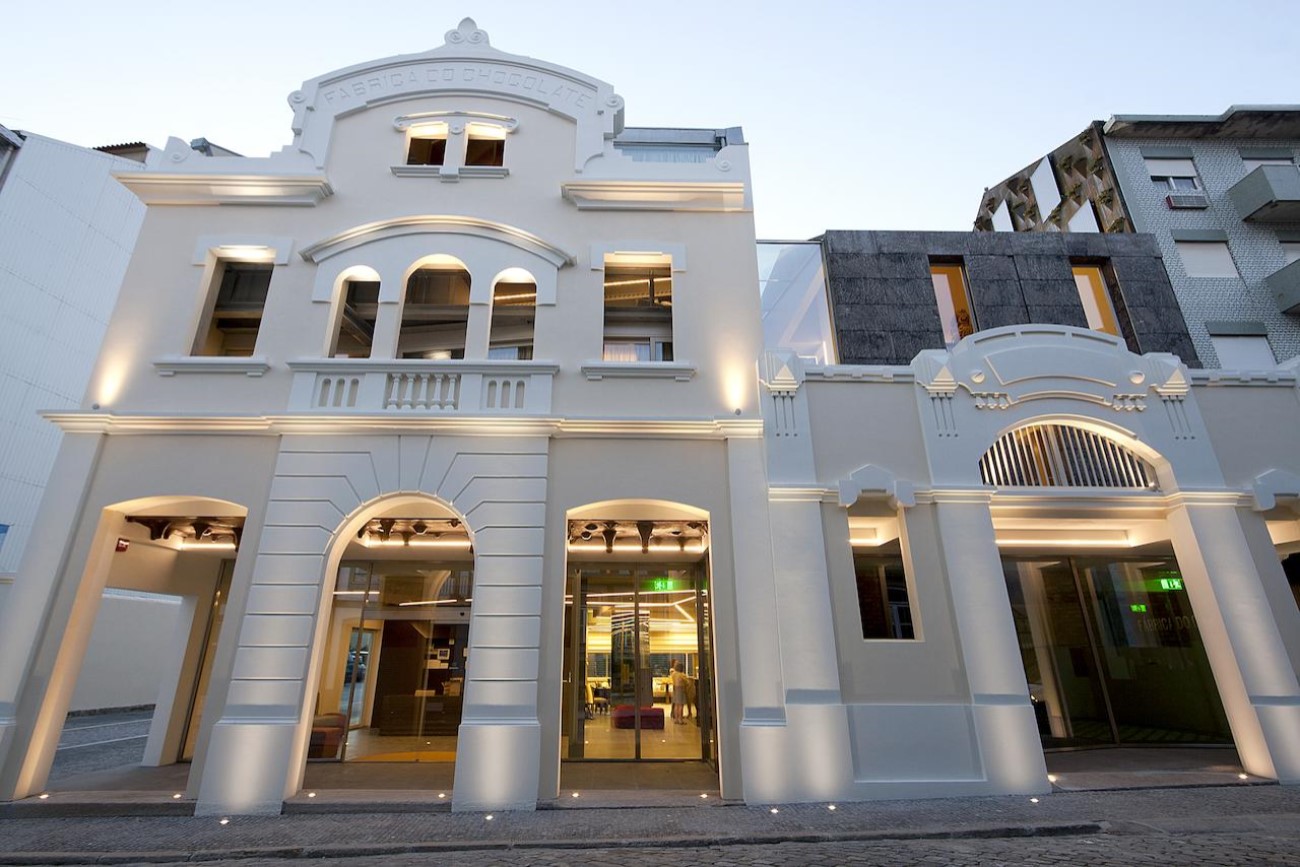 Walk to the Marina of Viana do Castelo

After visiting the museum, take a walk down to the marina of Viana do Castelo. From here you can see the Ponte Eiffel, a multi-level bridge designed by Gustave Eiffel in 1878. The bridge crosses over the Lima river, making the connection to the beaches in the south coast of the city, such as Praia do Cabedelo. If you want to spend some time on the beach, check out the Viana do Castelo Beaches section below. 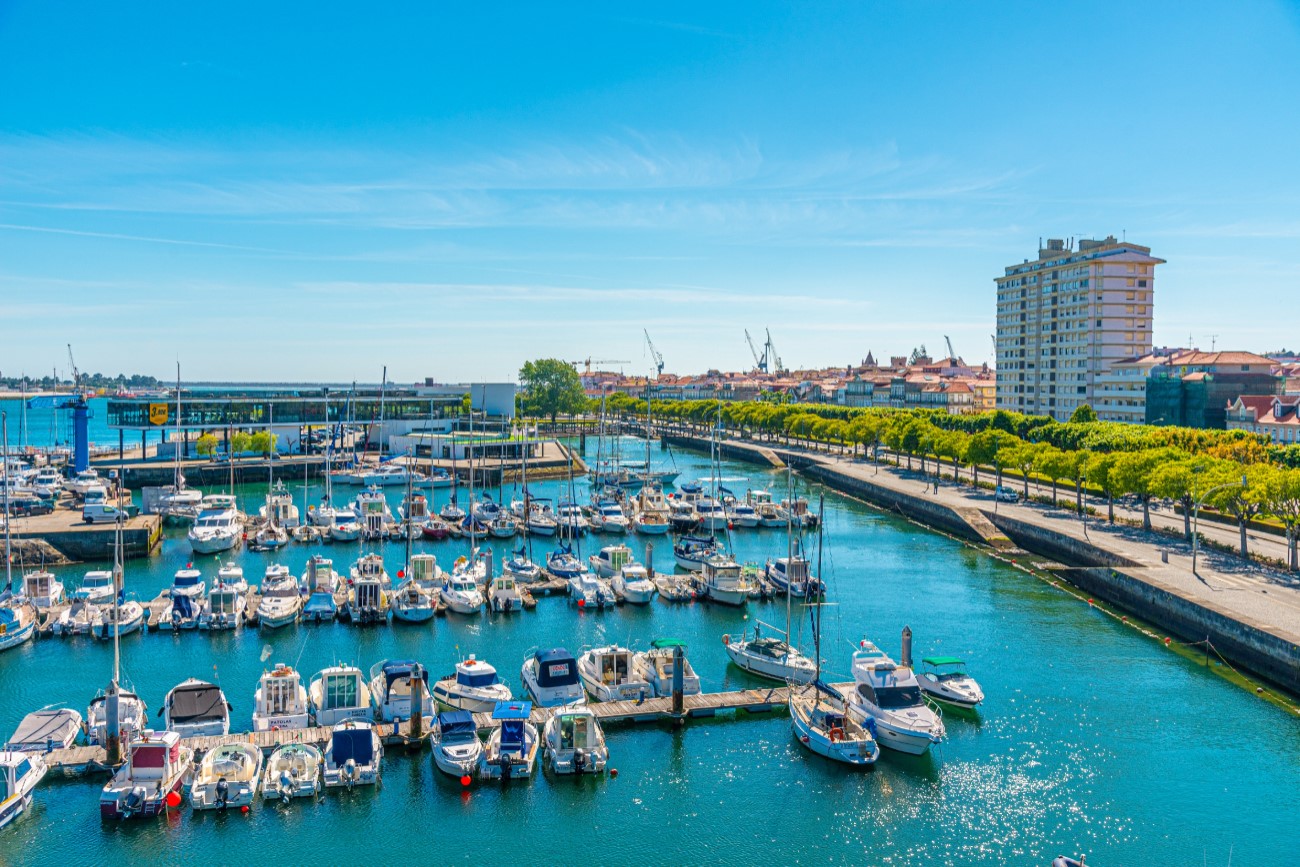 Marina at Viana do Castelo in Portugal

Climb aboard the Gil Eannes ship

From the marina, follow the promenade along the river, passing through a park, until you spot a large white ship by the water. Known as the Gil Eannes, it was once a hospital ship, supporting trawlers who set out to fish in Newfoundland. Its last journey was in 1973, and it was left abandoned in Lisbon until a public campaign rescued it and brought it back to Viana. Today, fully restored, the Gil Eannes ship is open to visitors as a museum, allowing them to climb aboard and wander through its cabins. Inside you'll find a variety of medical equipment, including x-ray machines and an operating room. 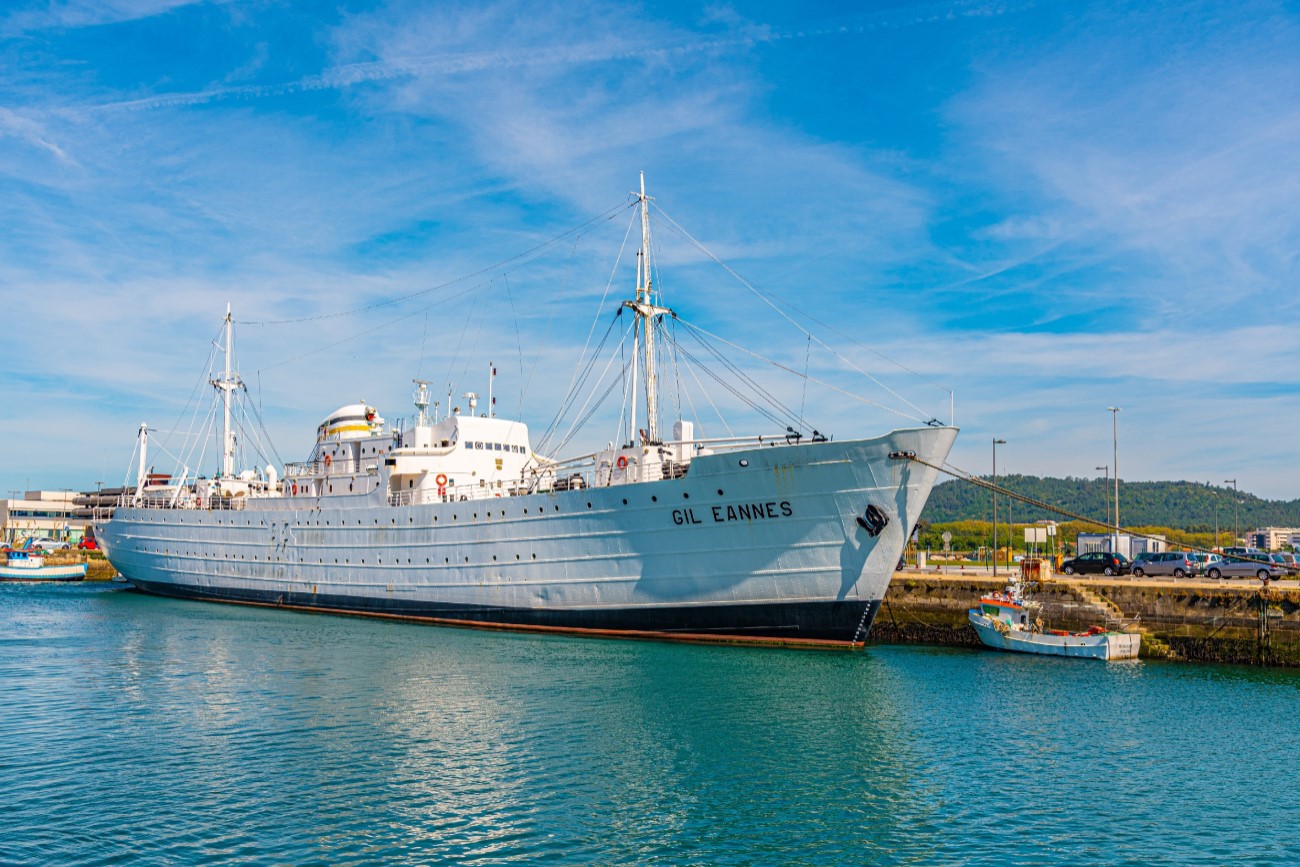 If you continue down the docks, you'll soon reach the Forte de Santiago da Barra, also known as Castelo de Viana. Standing on the edge of the Lima river, this 16th-century fortress once guarded the city against pirate attacks. It's worth walking around the ramparts to capture the views of the sea and the Monte de Santa Luzia. 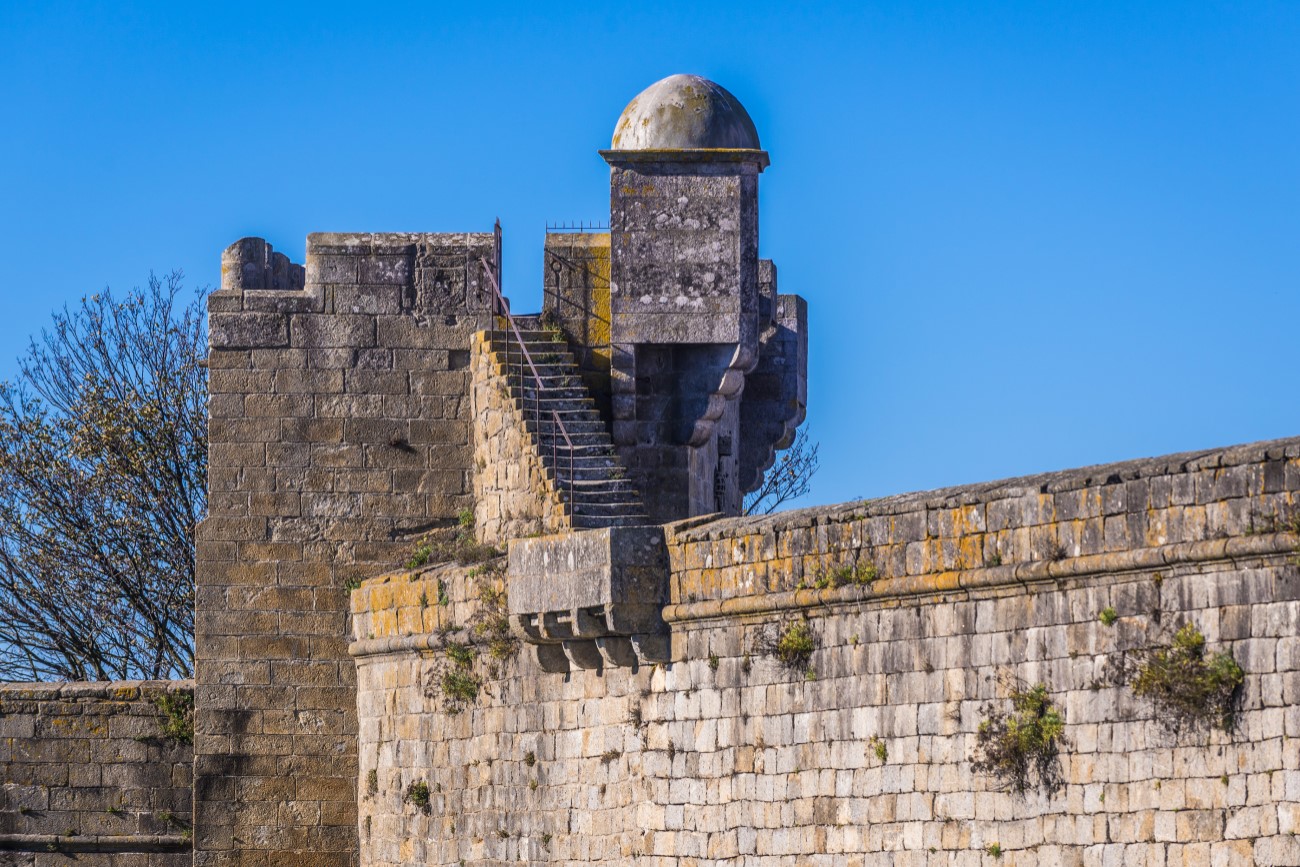 The Forte of Santiago da Barra in Viana do Castelo city, Portugal

Perhaps the most iconic attraction in Viana do Castelo is the Santuário de Santa Luzia, a stunning neo-Byzantine church towering above Monte de Santa Luzia. There are three ways to get up here: you can drive, get the funicular or climb the 659 steps if you're feeling brave. 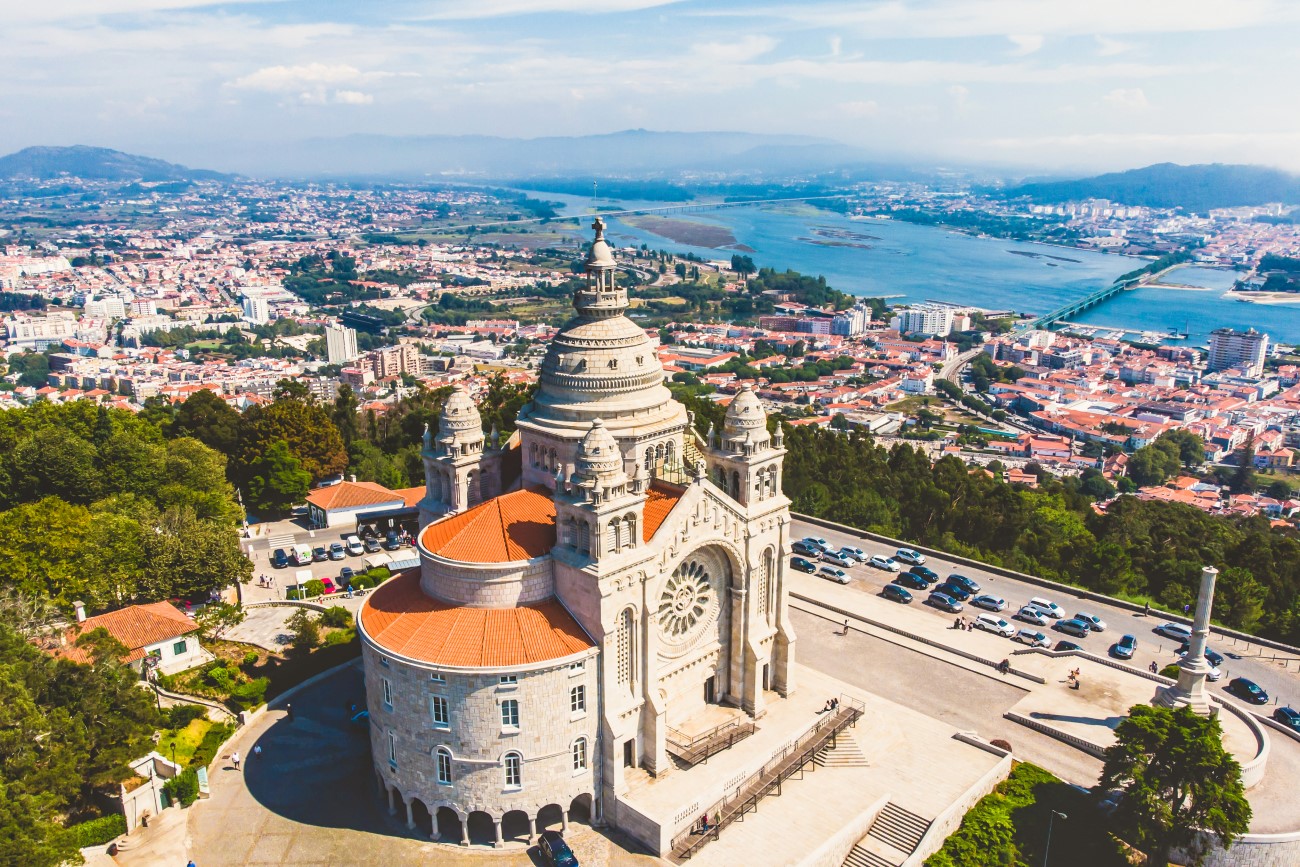 Completed in 1959, the sanctuary has a similar style to the Sacré-Coeur in Paris, combining Neo-Gothic and Byzantine elements. Standing outside, you can't help capturing the magnificent scenery featuring the mountains, the river and the ocean. For an even higher view, you can climb up to the church's dome. An elevator takes you halfway, but the final section includes a narrow spiral staircase. The interior is quite modern, but the altar stands out with its fresco paintings and marble sculptures. 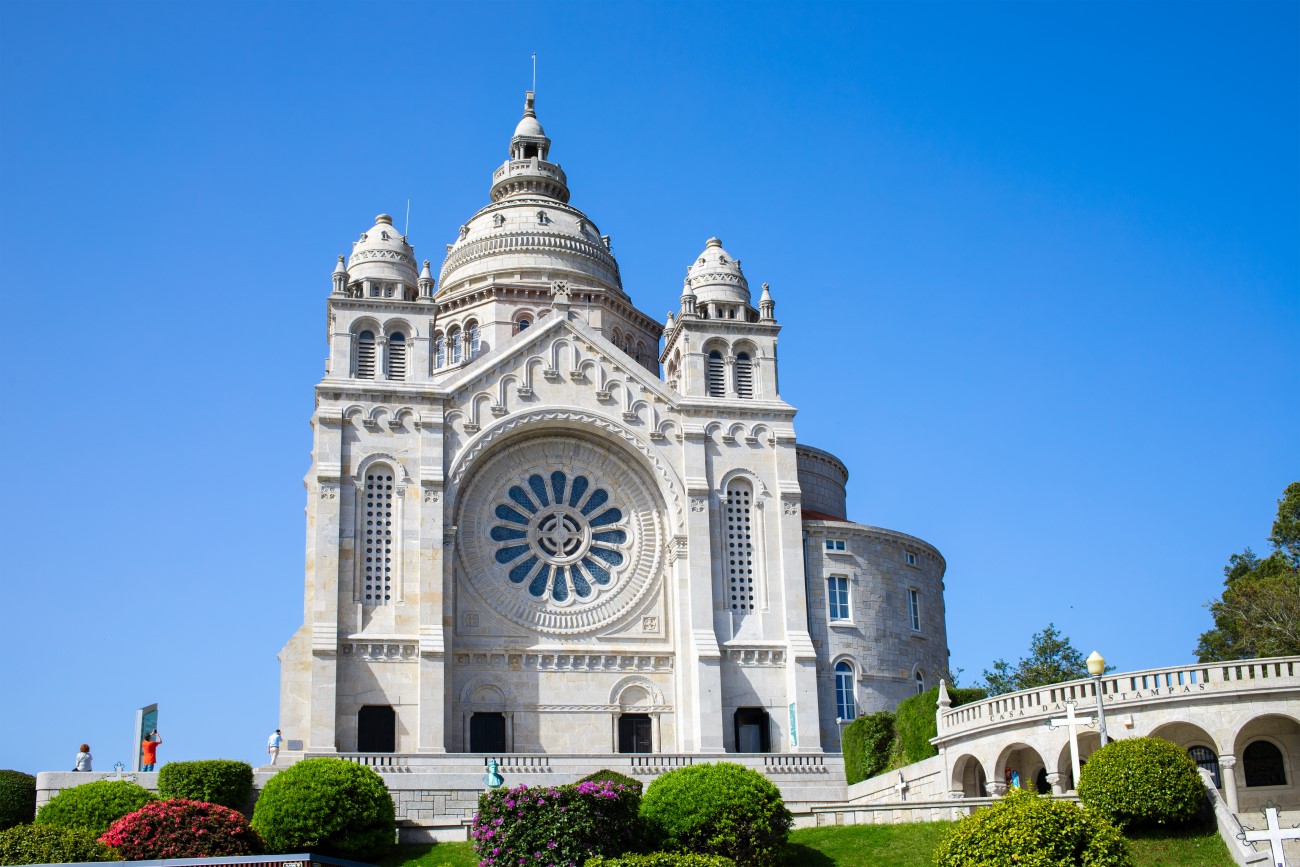 Just behind the sanctuary, you'll find another landmark—the Citânia de Santa Luzia. Similar to the one in Guimarães, these ruins belonged to a Celtiberian village. A boardwalk leads the way through this historic fortified settlement dating back to the 4th century BC. Its privileged location above a mountain made it possible for residents to surveil the Lima estuary below. Today, visitors can enjoy the panoramic views from here while capturing the remains of the village. For detailed information about the site, make sure to grab a leaflet from the interpretation centre or book a guided tour in advance. 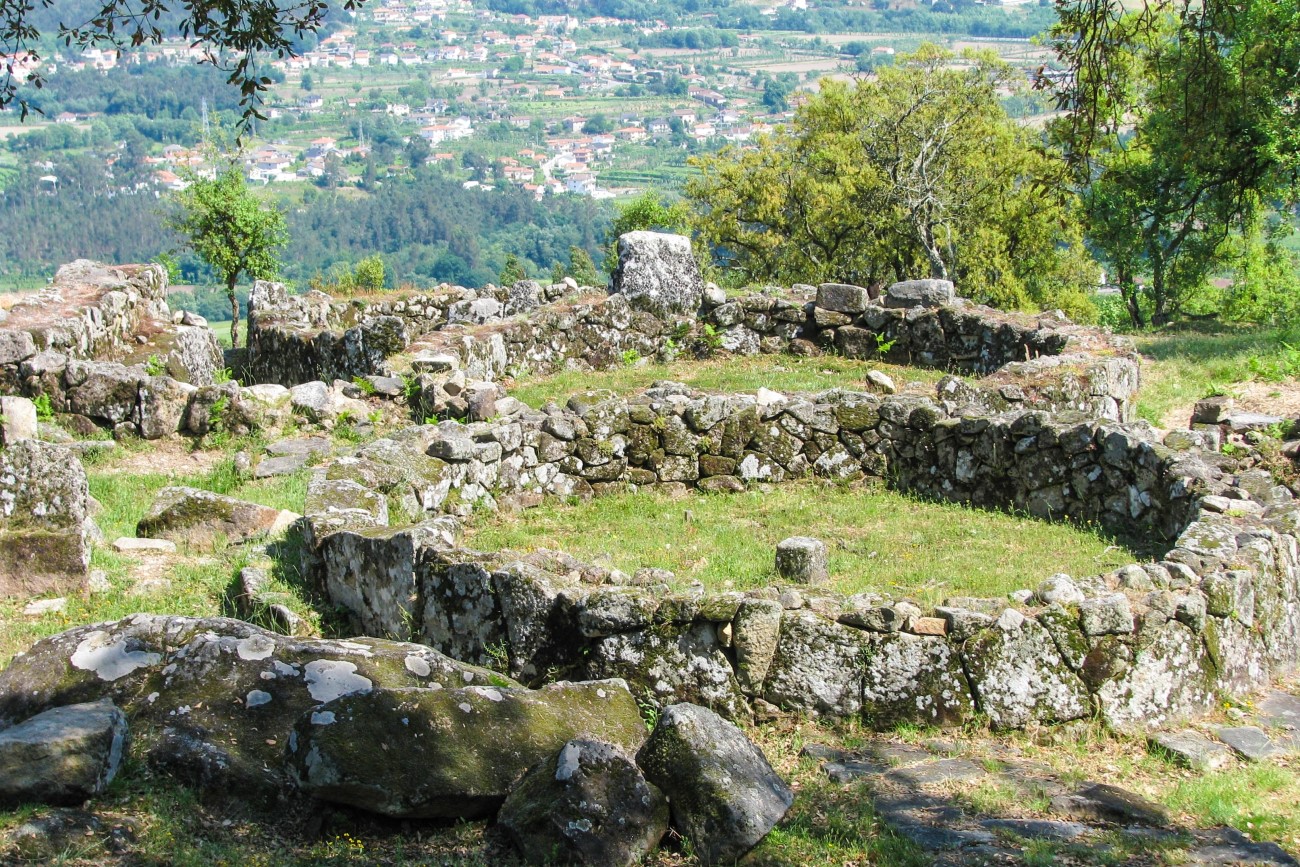 Viana do Castelo is home to a series of incredible beaches, which stretch up and down the city’s coastline.

If you want to stay near the city centre, Praia do Norte and Praia do Cabedelo are your best options. Praia do Norte​ is a small urban beach located north of Viana. Although there’s not much sand around, the large saltwater pool makes up for it. Along the beach, you’ll find two cafés where you can go for a drink. 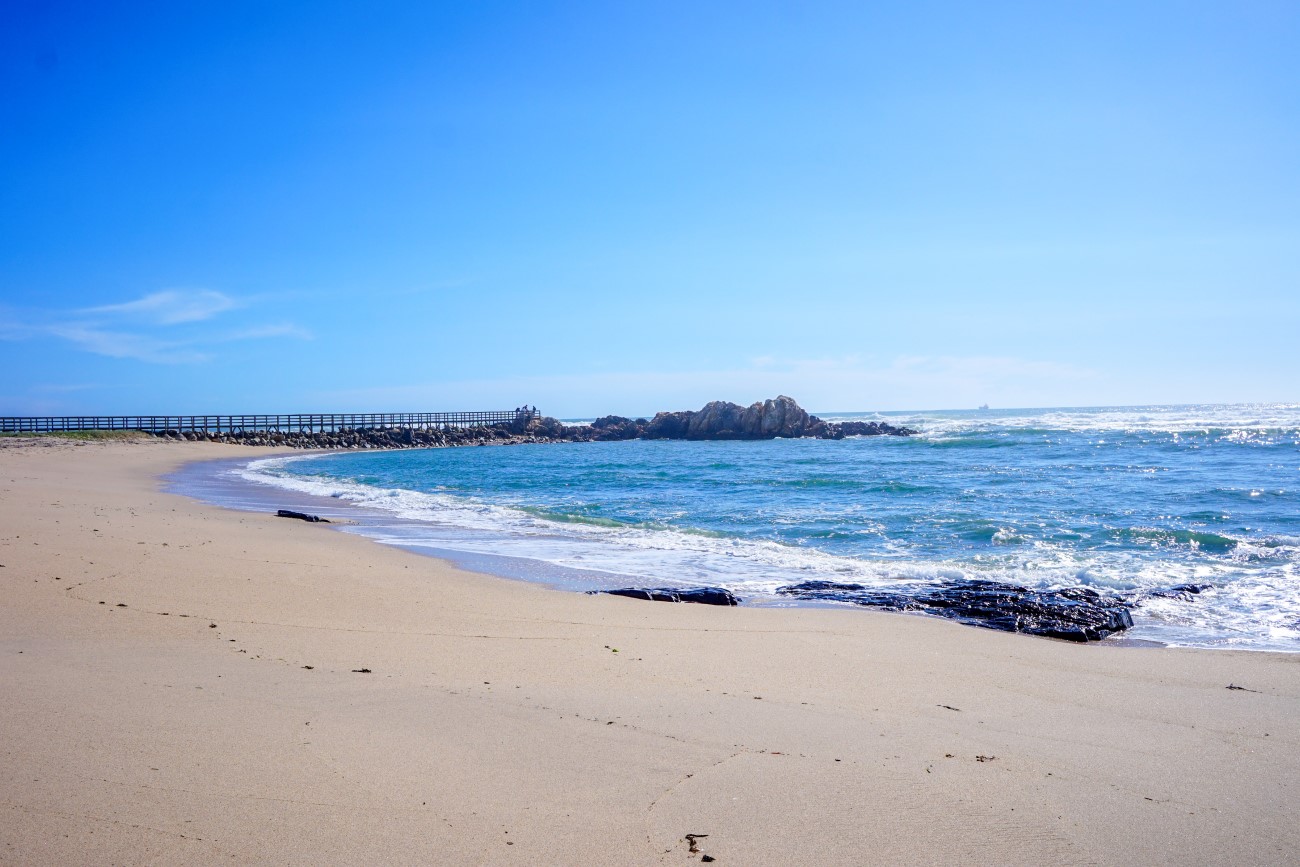 Located on the other side of the river, south of the city, is ​Praia do Cabedelo​. To get here, you’ll need to drive or take a ferry. The ferry departs near the cultural centre and takes about five minutes to reach the other margin. From there, it’s a couple more minutes walk to arrive at the beach. It offers perfect conditions for watersports activities such as surfing and windsurfing. 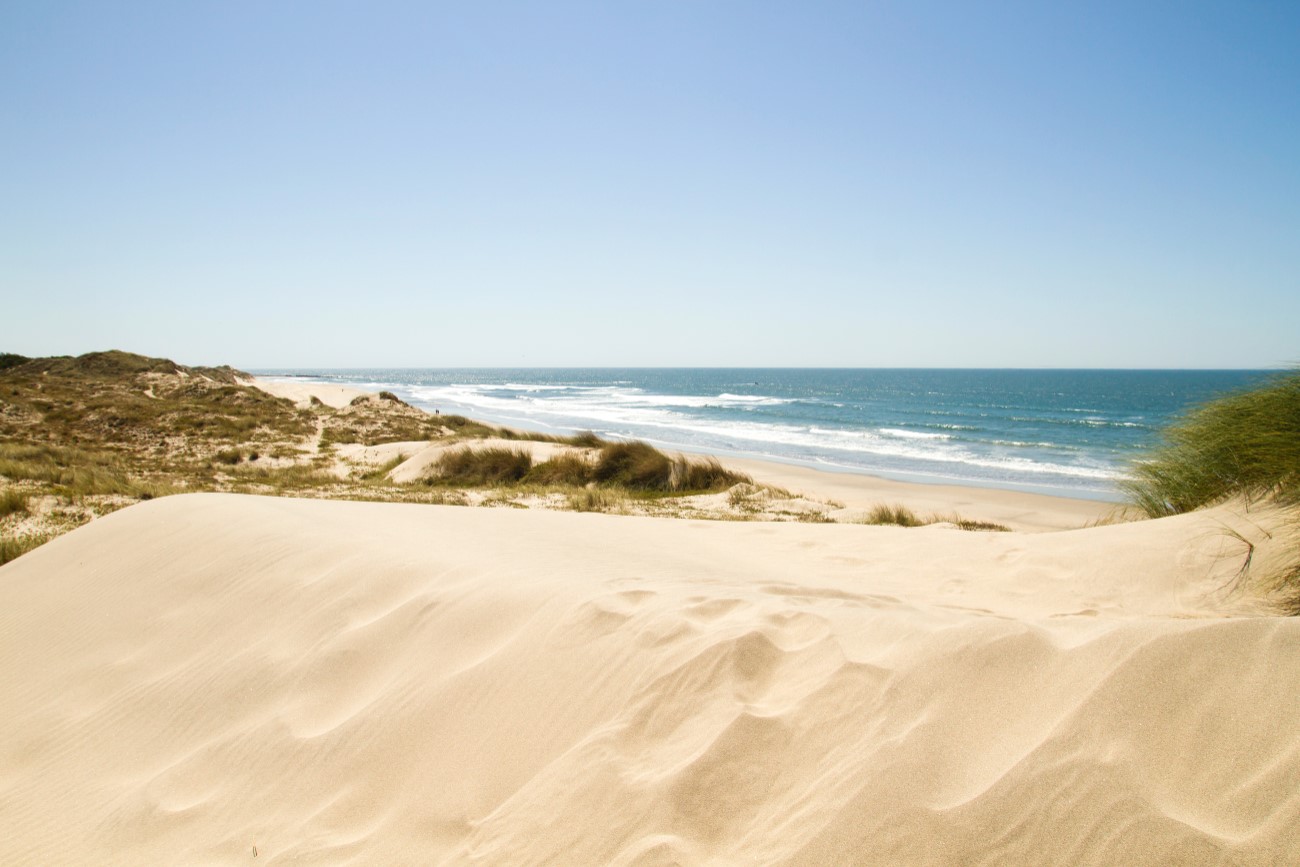 Cabadelo beach and dunes in Viana do Castelo, Portugal

A few miles down from Cabedelo are the beaches of Rodanho and Amorosa. ​Praia do Rodanho​ offers a vast sandy stretch surrounded by dunes and vegetation. In the summer, this beach welcomes many nudists who enjoy its quiet atmosphere. Also protected by dunes, ​Praia da Amorosa​ is a favourite spot for surfing and bodyboarding. When the tide is low, you can observe many species such as limpets, mussels or starfishes. 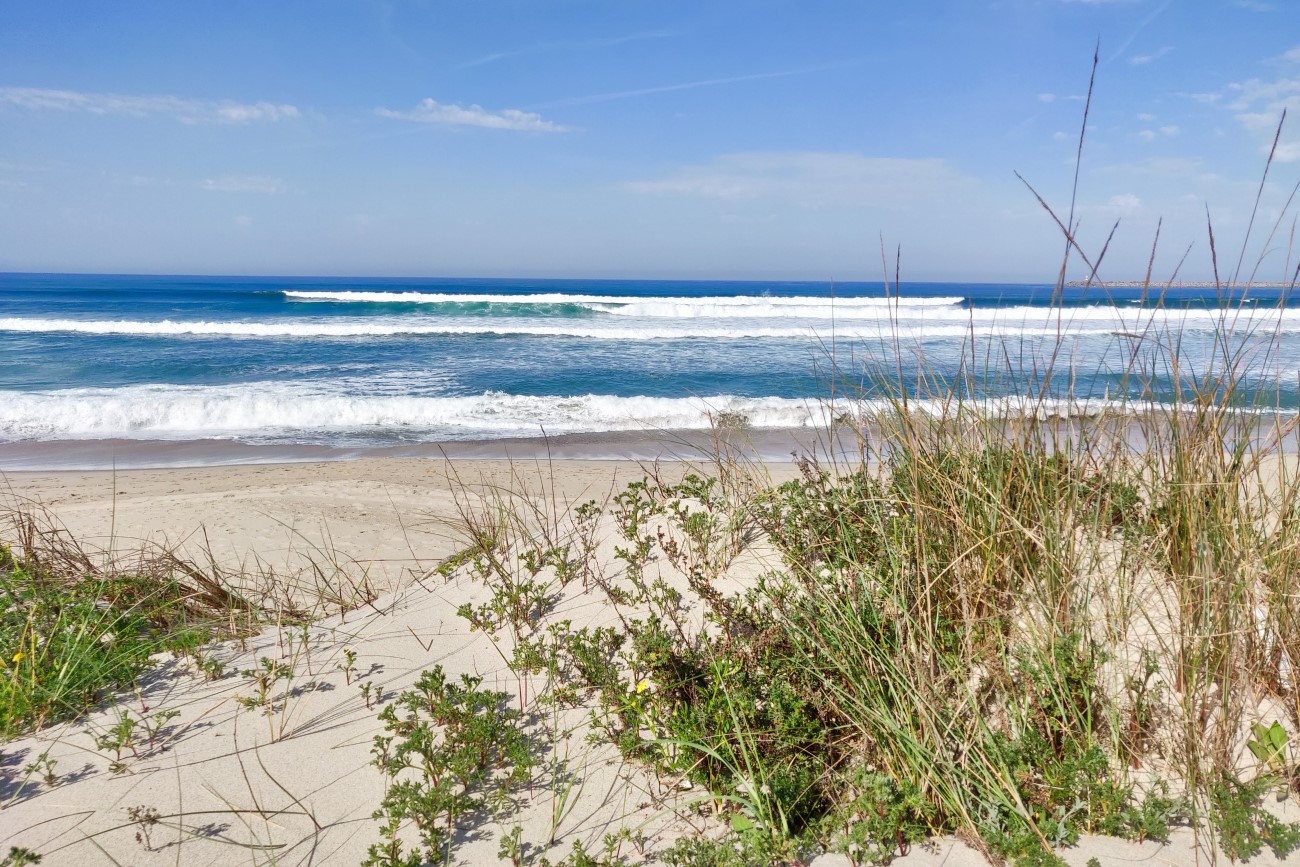 There are three other beaches near Viana do Castelo that are also worth the visit: Praia de Carreço, Praia da Arda and Praia de Afife. Sheltered from the wind, ​Praia de Carreço​ is a popular choice among families. As you walk to the beach, you might spot the European shag, a dark coloured seabird that inhabits this region. If you’re heading this way, make sure to visit the traditional windmills of Montedor located nearby. ​Praia da Arda​ attracts a younger crowd, and it's famous among surfers and bodyboarders. There’s a surf school here in case you want to get a lesson. 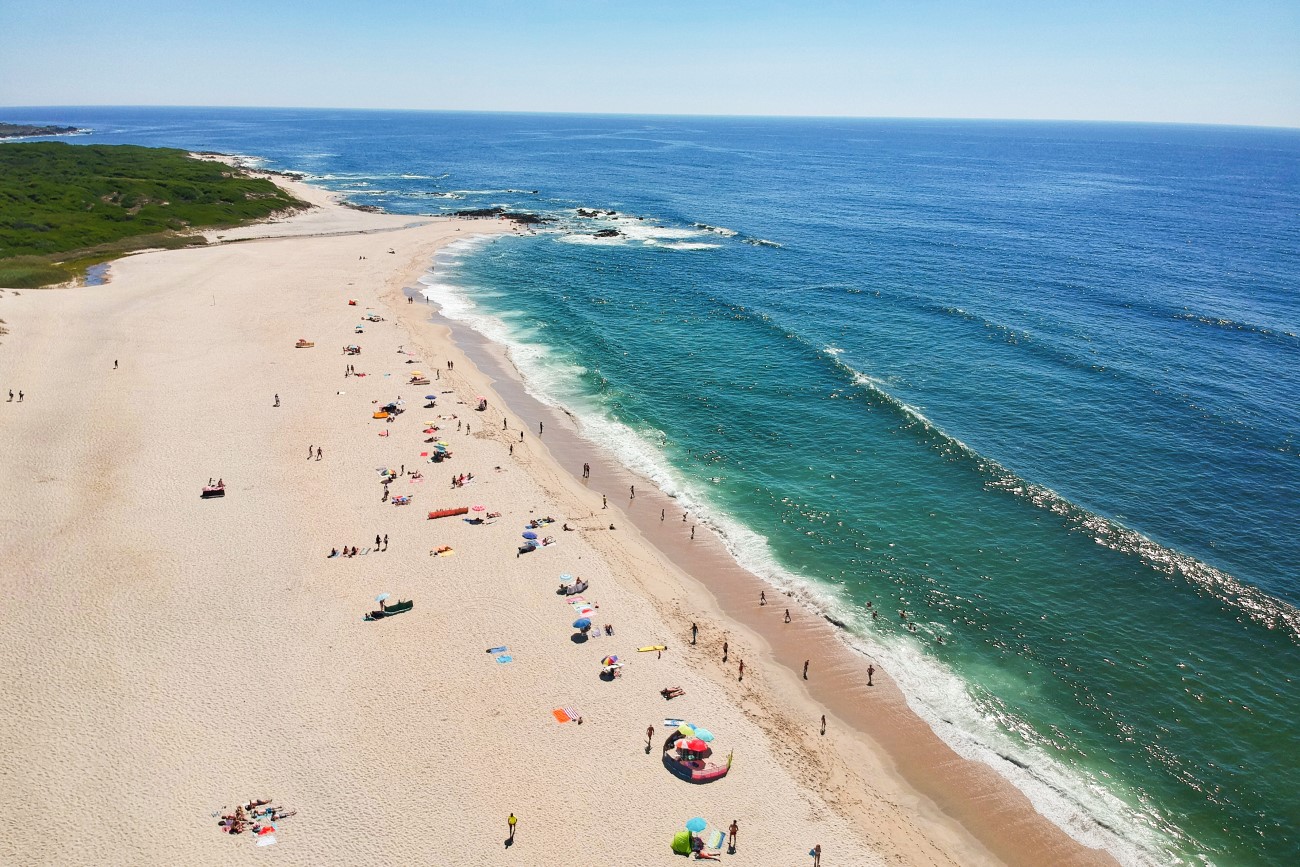 Finally, there’s ​Praia de Afife, a large beach with golden sands accessed by a wooden walkway. The sea is usually strong here, so it attracts many surfers too. Families can enjoy the southern end of the beach, as the river meets the sea and forms a small lagoon. 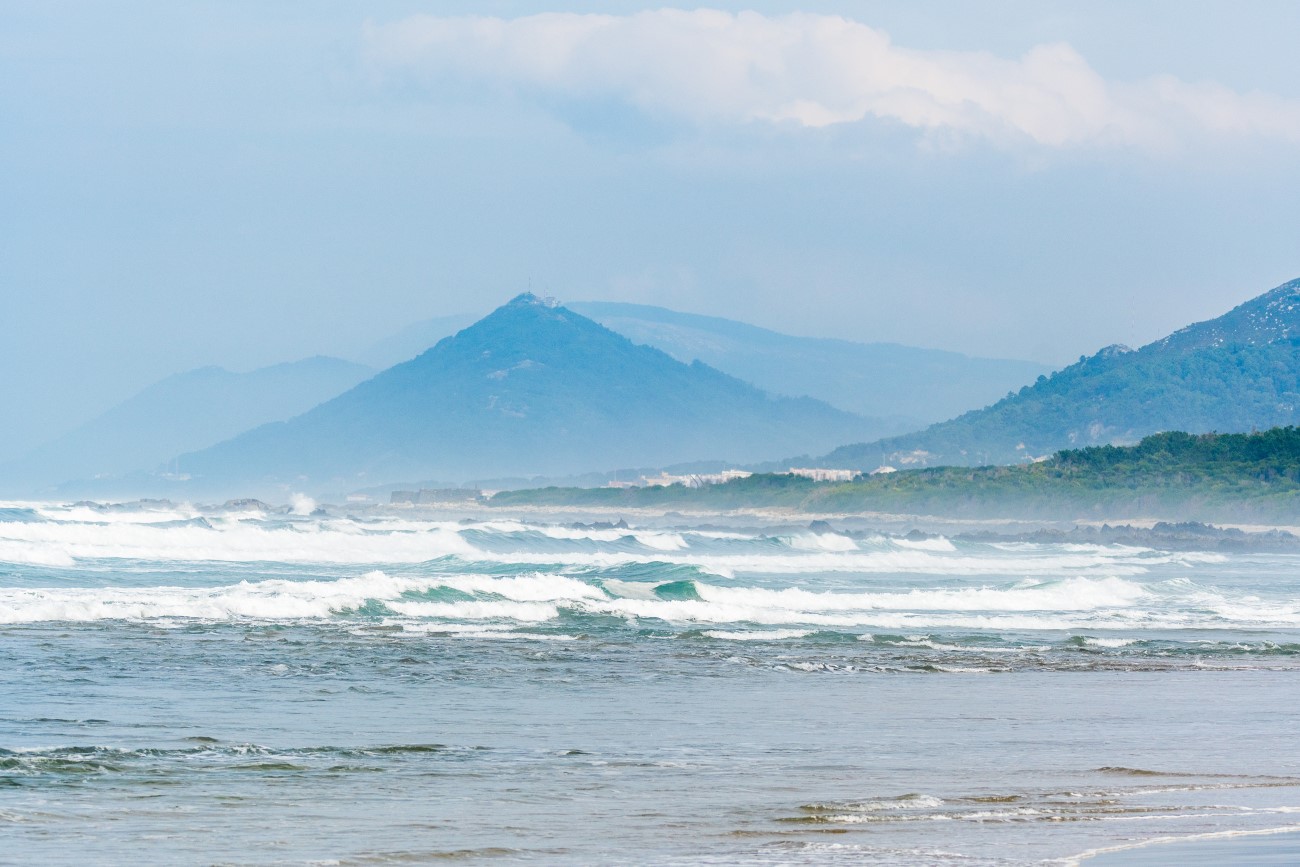 There are many restaurants in Viana do Castelo where you can enjoy a good meal. Below are a few of our suggestions:

Sitting high above Monte Santa Luzia, ​Pousada de Viana do Castelo ​offers incredible views of the city and the ocean. Whether you’re relaxing in your bedroom or having breakfast on the terrace, you can’t help catching a glimpse of the imposing Sanctuary of Santa Luzia standing on the opposite hill. This 4-star hotel also includes an outdoor pool, a restaurant and a spa.

Chocolate lovers will feel right at home at the ​ Hotel Fábrica do Chocolate​. Housed in a former chocolate factory, this boutique hotel also doubles as a museum. There are 18 rooms, and each of them has a different theme, from “Hansel and Gretel” to “Charlie and the Chocolate Factory”. Guests can choose from a series of experiences, including chocotherapy treatments, a chocolate tasting or visit the interactive museum to learn more about the origins of this delicious ingredient.

If you want to be near the beach, ​Hotel FeelViana​ is the place for you. Set within a modern wooden building, this 4-star hotel blends perfectly with its natural surroundings of beaches and pine trees. Guests can choose from the 46 rooms or stay in one of the nine cosy bungalows. There are several restaurants and bars on-site, as well as two swimming pools, a gym, kids clubs, and a spa with sauna and Turkish bath. Within the hotel, there’s also a sports centre where you can sign up for a series of experiences including kitesurf, surf, stand up paddle or mountain biking.