What To Do In Guimaraes

Portugal's roots begin in Guimarães. It was here that its first king was born and it was the country's first capital before Lisbon took its place.

Walking through the city today, you can't help but immerse yourself in history. From the ruins of a Celtiberian tribe to its well-kept medieval castle and its numerous churches, Guimarães has earned its World Heritage title.

On top of its historic charm, is the natural landscape of the Penha mountain and a lively cultural scene influenced by its young student population.

If you're wondering what to do in Guimarães, below is our one-day itinerary featuring tips of where to eat and where to stay. 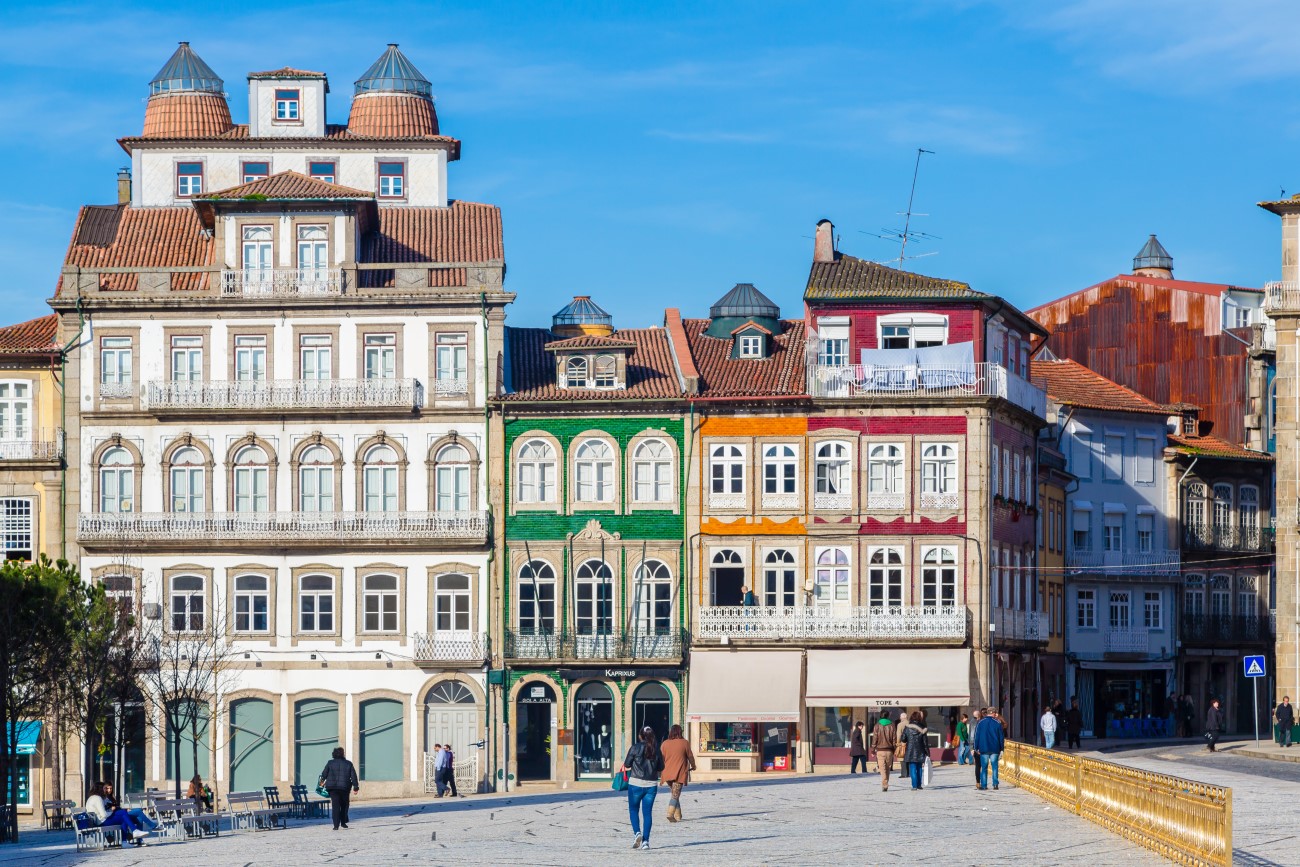 Travel back in time at the Citânia de Briteiros

Before reaching the centre of Guimarães, it's worth taking a detour to see the Citânia de Briteiros, located a few miles north from the city. Nestled in the countryside, this archaeological site has Celtic roots and dates back to the 1st century BC. Defensive walls and stone huts are spread across the site, forming a fortified village known as ​citânia. Amid the ruins are two reconstructed huts (castros) that reveal how people lived in those days. Also noteworthy is the ​Pedra Formosa, a carved monolith belonging to an old bathhouse. 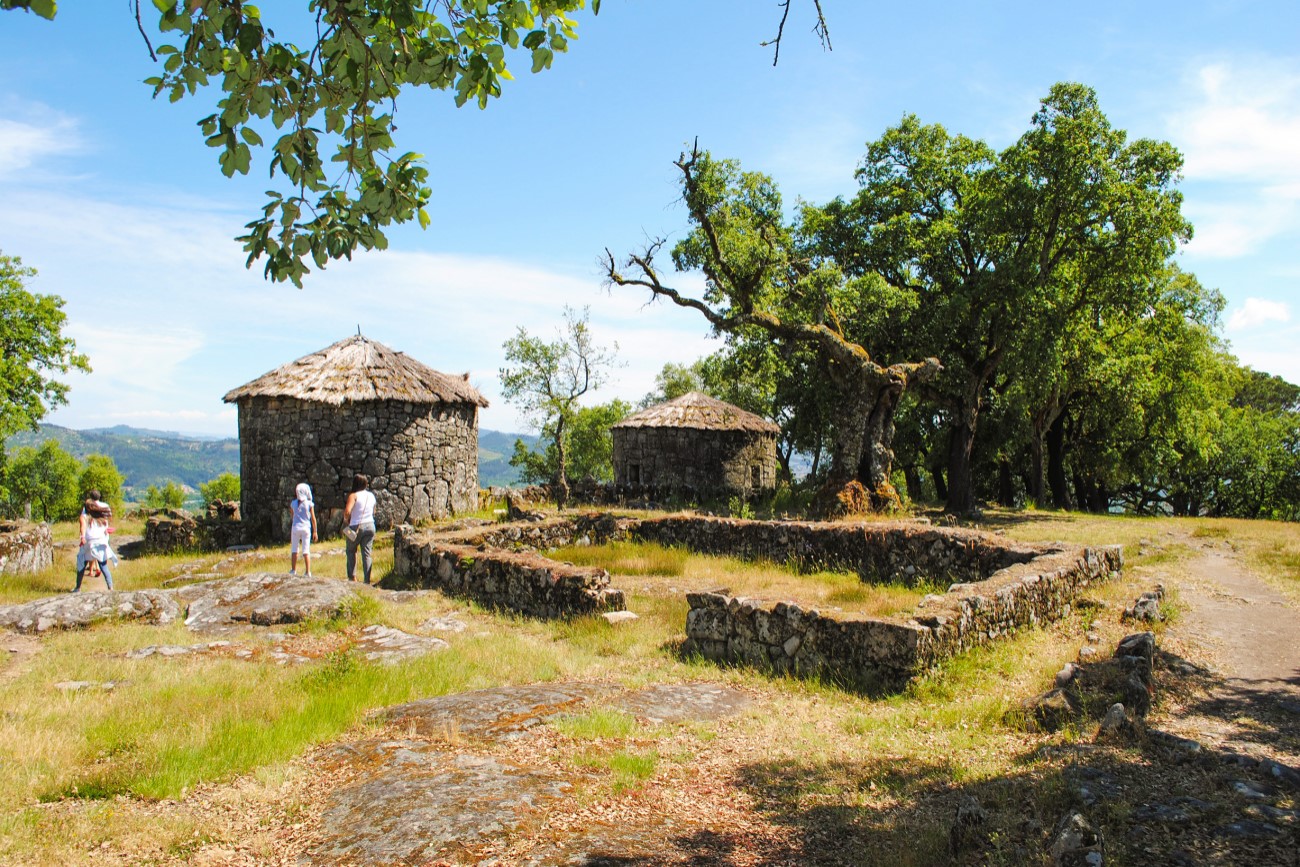 Climb up the Guimarães Castle

What better place to begin a tour of Guimarães than by its imposing medieval castle? Originally erected around the 10th century, it's considered the nation's cradle, thought to be the place where Portugal's first king was born. The castle was left abandoned for a while, but luckily it was restored to its full glory. The square towers that once protected the city against invaders, now offer great views of the city and the Penha mountain. Take a walk along the ramparts and then climb the keep for an even better view. 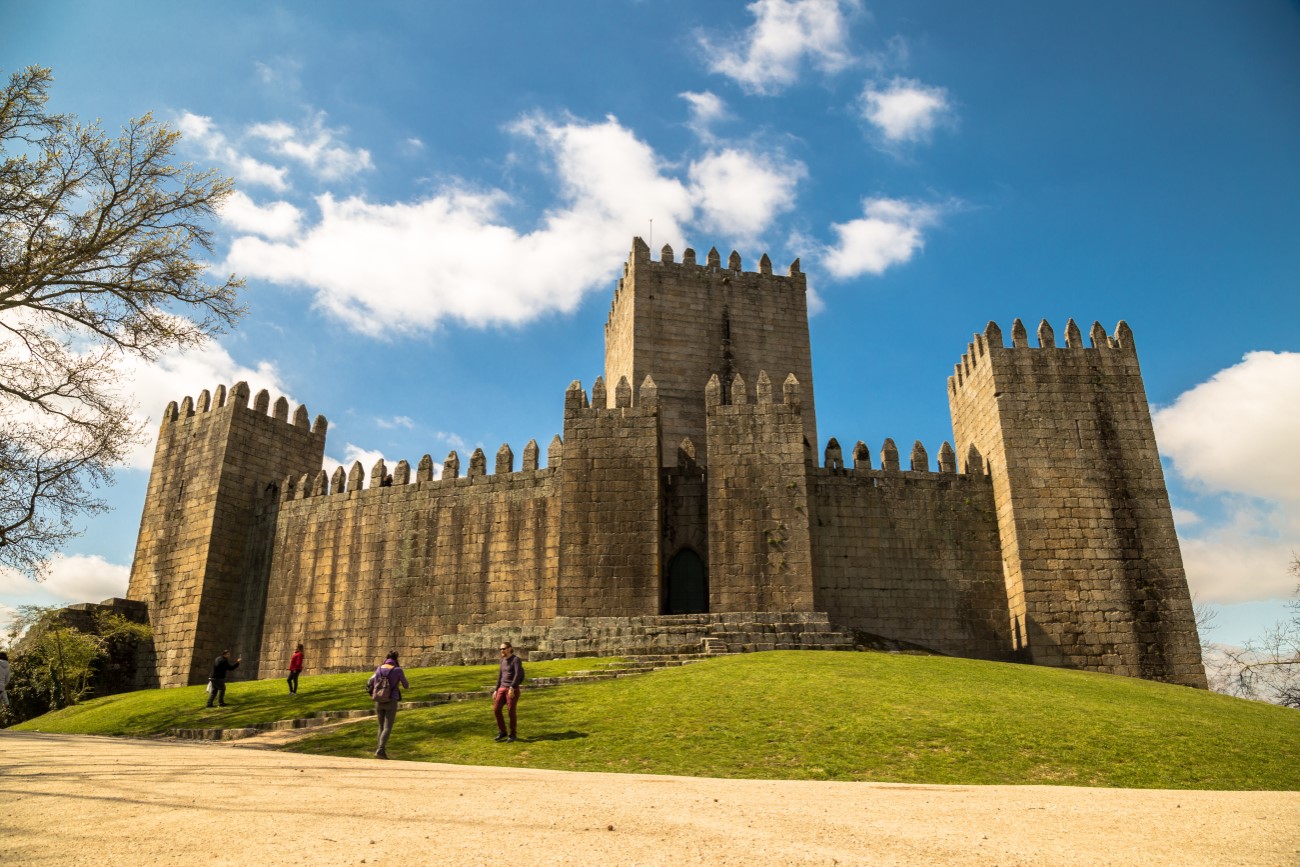 Step inside the Palace of the Dukes of Braganza

Not far from the castle is the Palace of the Dukes of Braganza. This 15th-century palace sticks out with its crenellated towers and brick chimneys popping out from the roof. Afonso (Count of Barcelos) was the first Duke of Braganza, and his family resided here for many centuries before they moved down to Vila Viçosa. The palace got a makeover in the 20th century when it served as the residency of president Salazar. Visitors can now wander inside and admire a vast collection of tapestries, ceramics and medieval weapons. 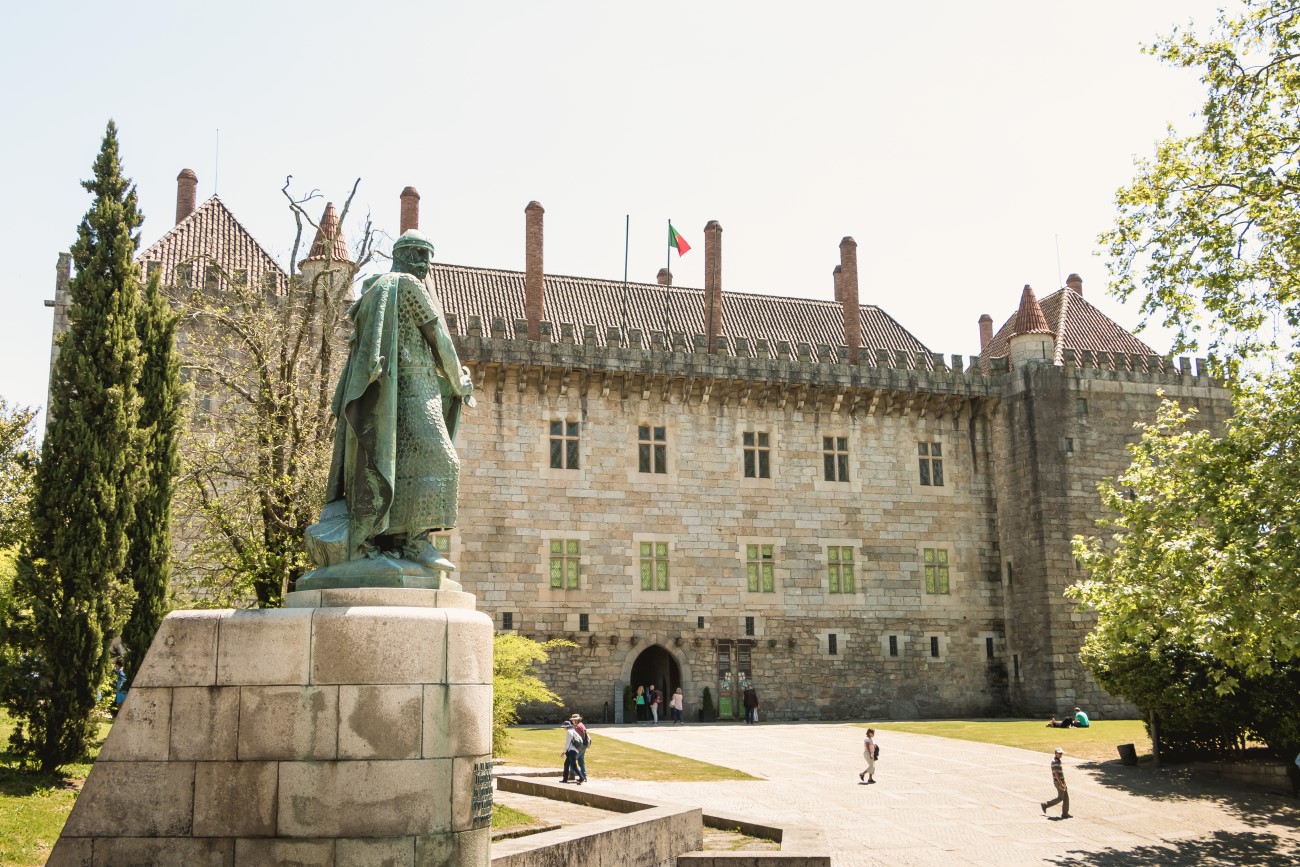 The Palace of the Dukes of Braganza, Guimarães, Portugal

As you make your way down the hill, take a turn and follow Rua da Santa Maria, one of the oldest streets in Guimarães. Planted on both sides of the street is a series of historic buildings dating back to the 12th and the 13th century. This narrow street was initially created to make the connection between the castle,
on the upper part of town, and a convent founded by the countess Mumadona Dias on the lower end. 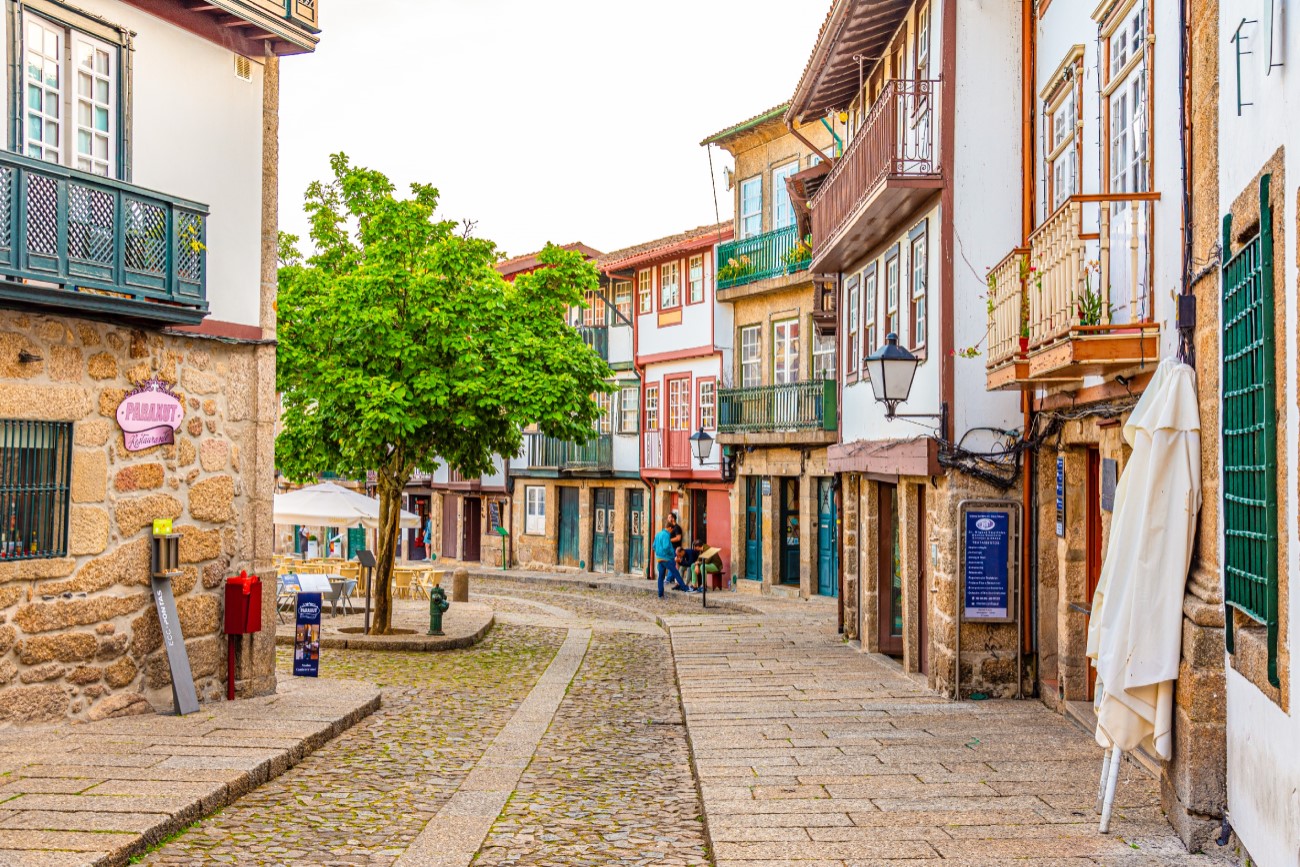 Largo da Oliveira is the heart of the city's old town and a lively meeting point for the locals. It gets its name from the olive tree (​oliveira ​ in Portuguese) that grows on this square. As you approach Largo da Oliveira, two monuments stand out: the Igreja de Nossa Senhora da Oliveira and the Padrão do Salado. Established around the 12th century, the church of Nossa Senhora da Oliveira draws you in with its imposing bell tower rising amid the square. Facing the church is the infamous Padrão do Salado, a Gothic shrine built to celebrate Portugal's victory against the Moors during the battle of Salado. After visiting the church, you can grab a drink in one of the many cafés dotted around the square. 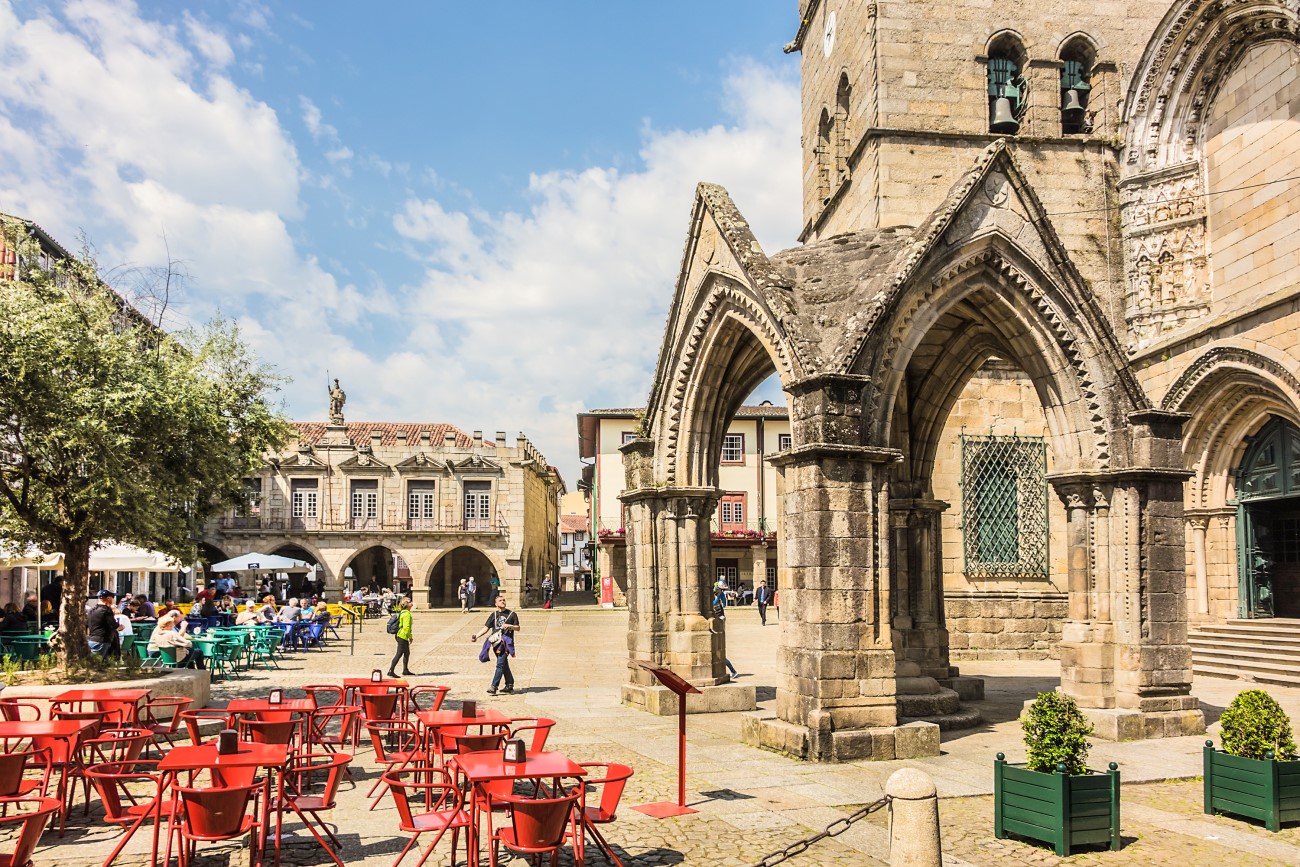 Largo da Oliveira is the heart of the city's old town, Guimarães, Portugal

Stop by Largo do Toural

Another square that deserves a visit is Largo do Toural. Contrasting against the city's medieval centre, at Largo do Toural you'll find yourself surrounded by 18th-century buildings. Take a stroll along the square and look up to admire the colourful façades. Nearby is one of Guimarães most famous landmarks, an old medieval tower which states in bold letters "Aqui nasceu Portugal", meaning Portugal was born here. 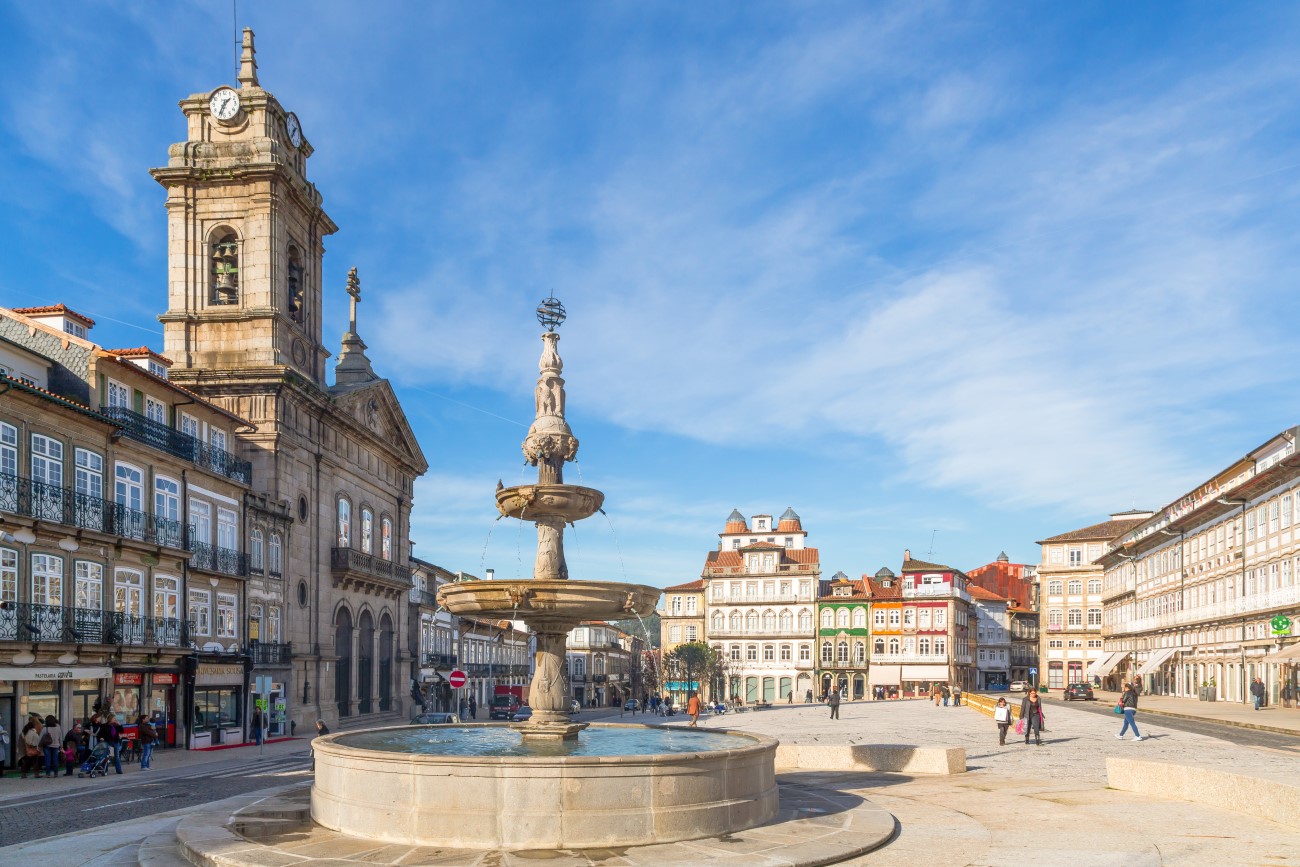 End your morning with a visit to the Museu Martins Sarmento. Established in 1881, it features a collection of archaeological items, including Roman columns and carved Celtiberian stones brought over from Citânia de Briteiros by archaeologist Martins Sarmento. Housed inside a 14th-century convent, the museum showcases most of the artefacts in the beautiful cloisters. 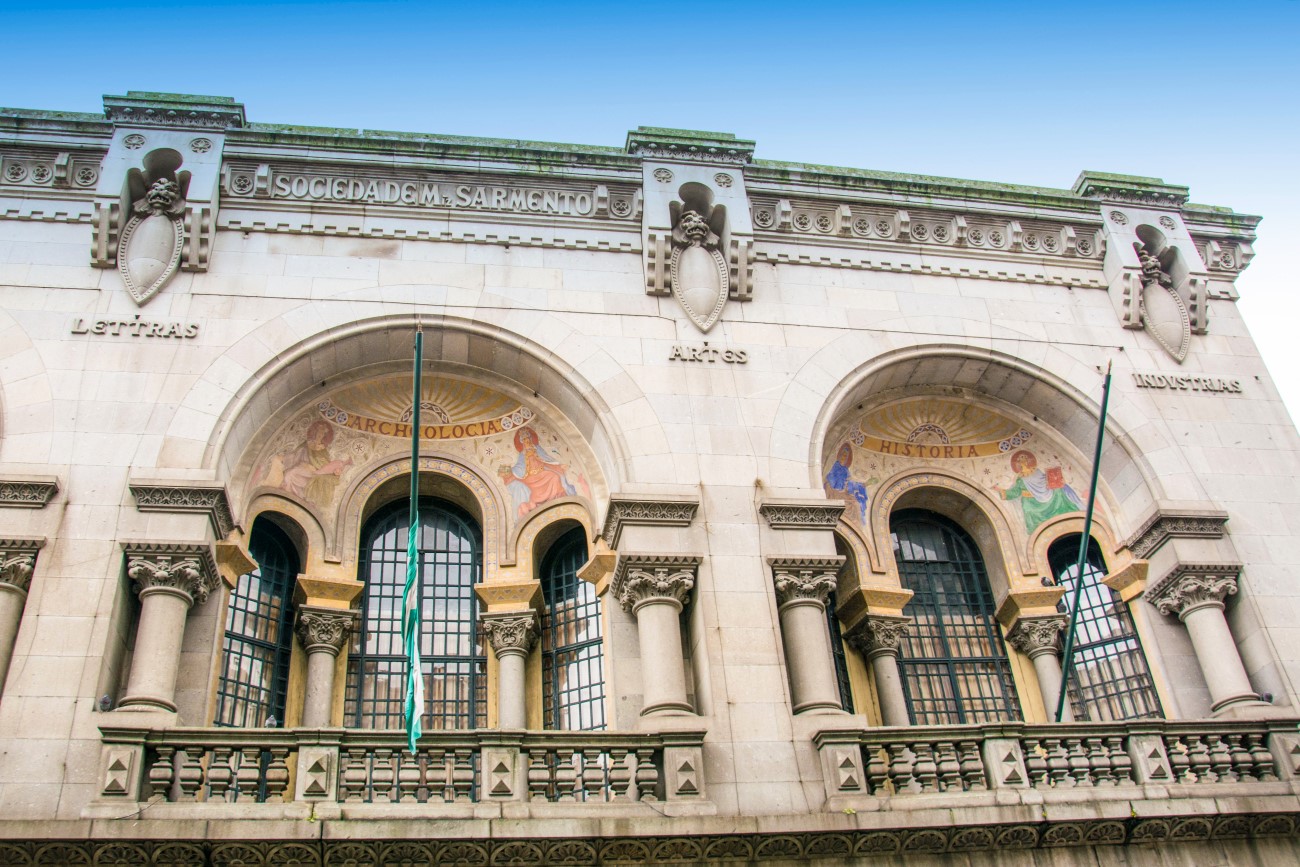 Just a few steps from the city centre, you'll find the Palácio Vila Flor. This 18th-century palace was created for the local aristocrat Tadeu Luís Fonseca, but it's now part of a cultural centre opening occasionally for art exhibits. Still, it's worth coming here to admire the palace's Baroque façade, decorated with statues of Portuguese kings, and wander around its pretty gardens. Attached to the palace is the Centro Cultural Vila Flor, a modern building founded in 2005 that hosts many of the city's cultural events. 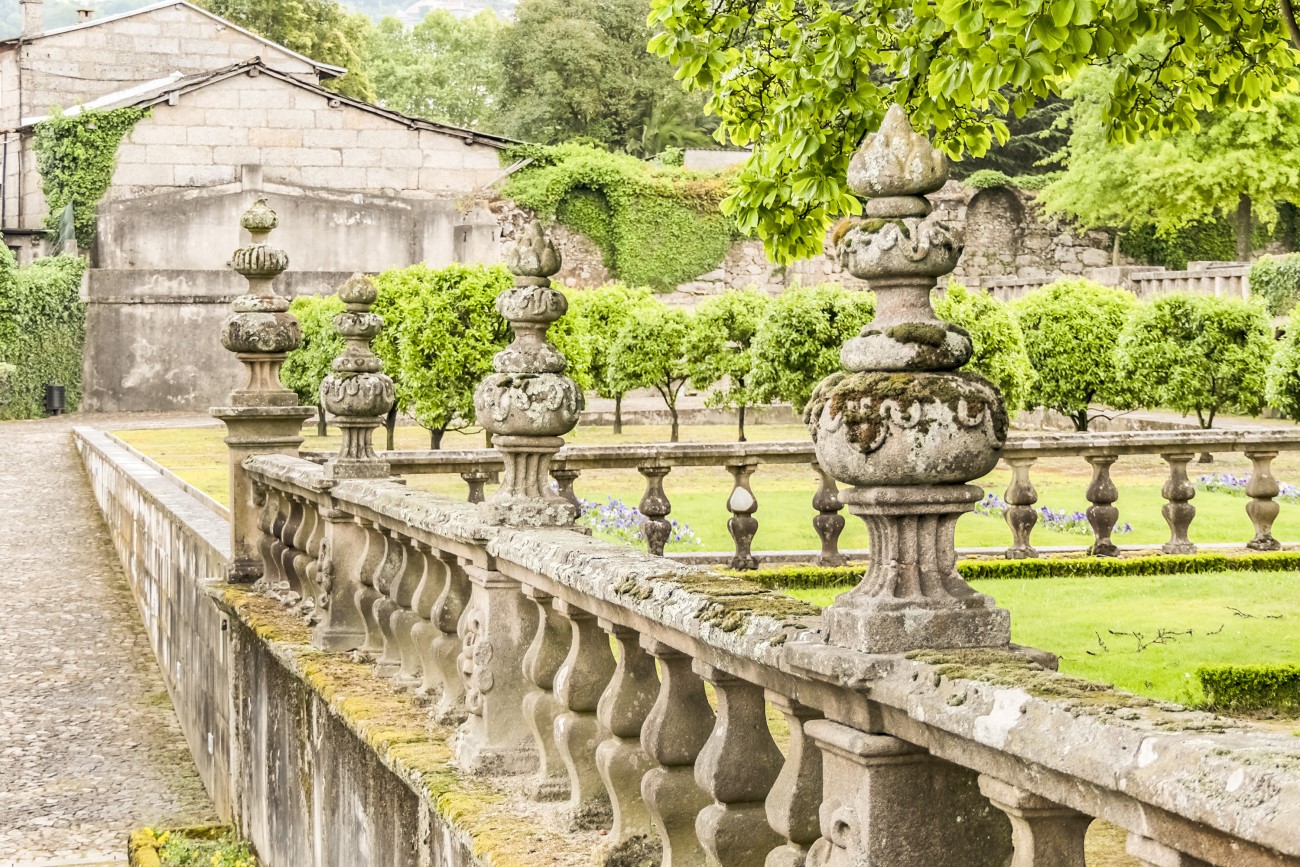 After touring the gardens, head towards the Igreja de São Francisco. While established in the 13th century, the church combines a mix of architectural styles, from the Gothic to the Baroque. You can't help capturing the blue and white tiles decorating the exterior walls, but it's worth stepping inside to admire its stunning gilded altar. 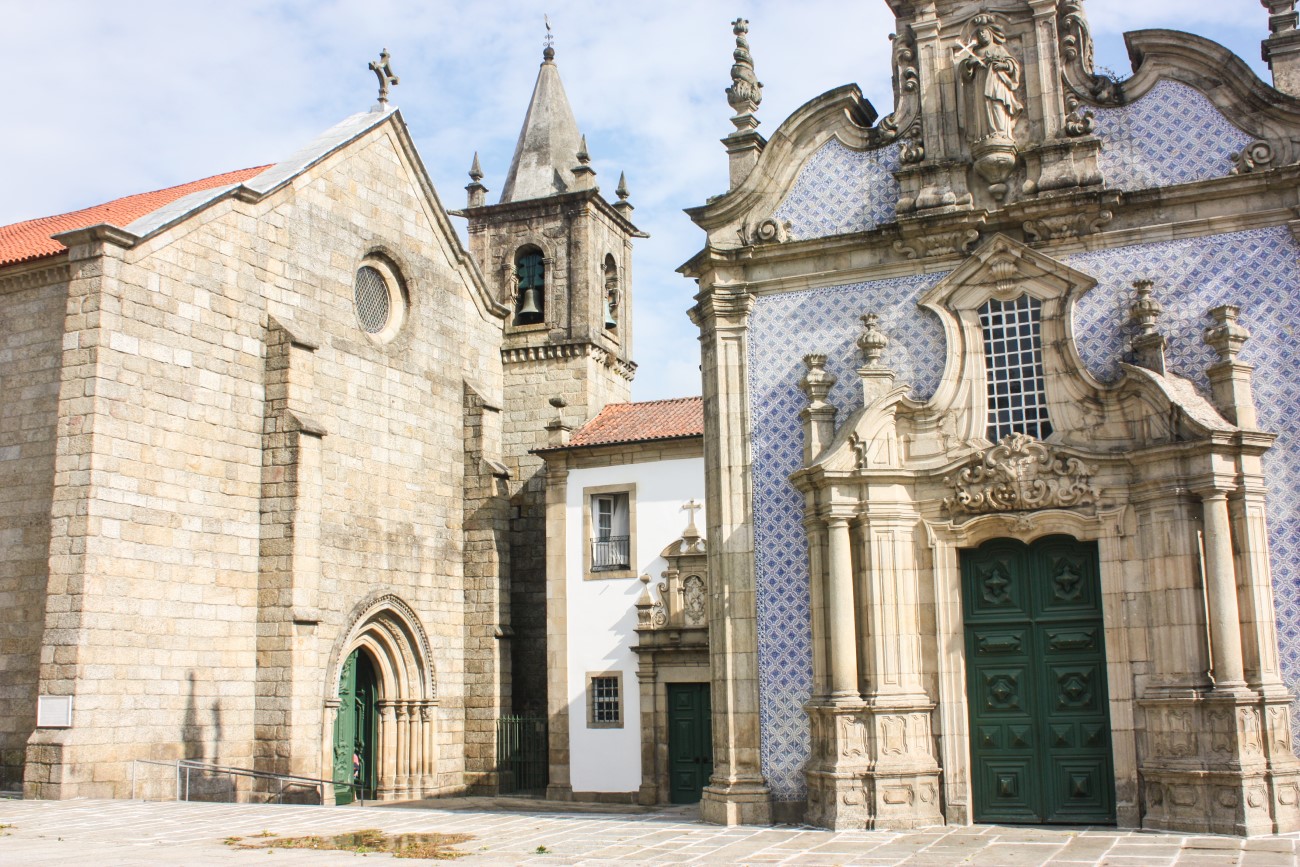 Near the church are the Tanques de Couros, an area with small tanning pits reminiscing of the city’s former leather industry. 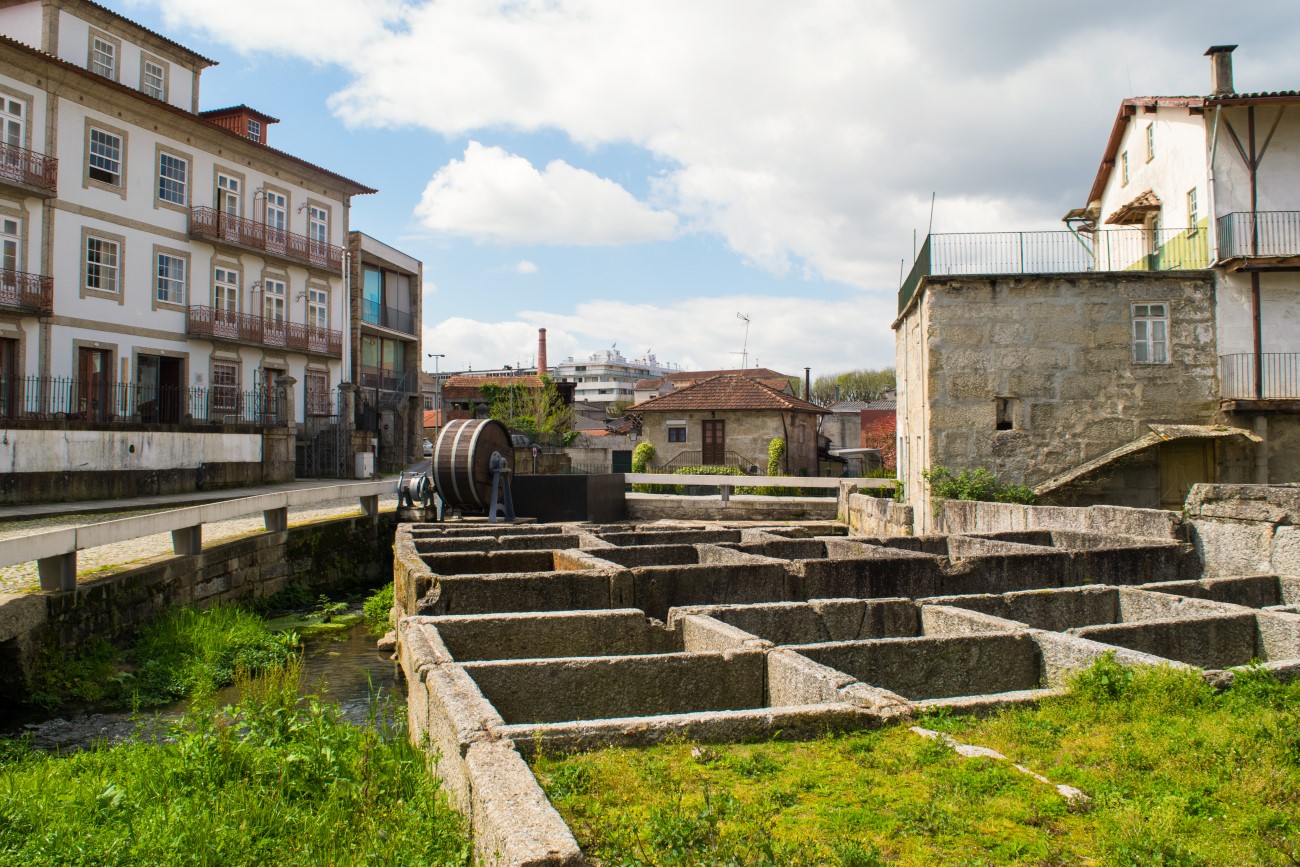 The Tanques de Couros: historic remains of leather tannery and tanning pools in the city of Guiamaraes, Portugal

Capture the Largo República do Brasil

Largo República do Brasil is the ideal spot for a picture in Guimarães. Standing on the edge of this square, you can capture the colourful gardens leading the way to the Igreja de Nossa Senhora da Consolação, a Baroque masterpiece completed in 1785. Rising behind the church are the wooded hills of Penha. 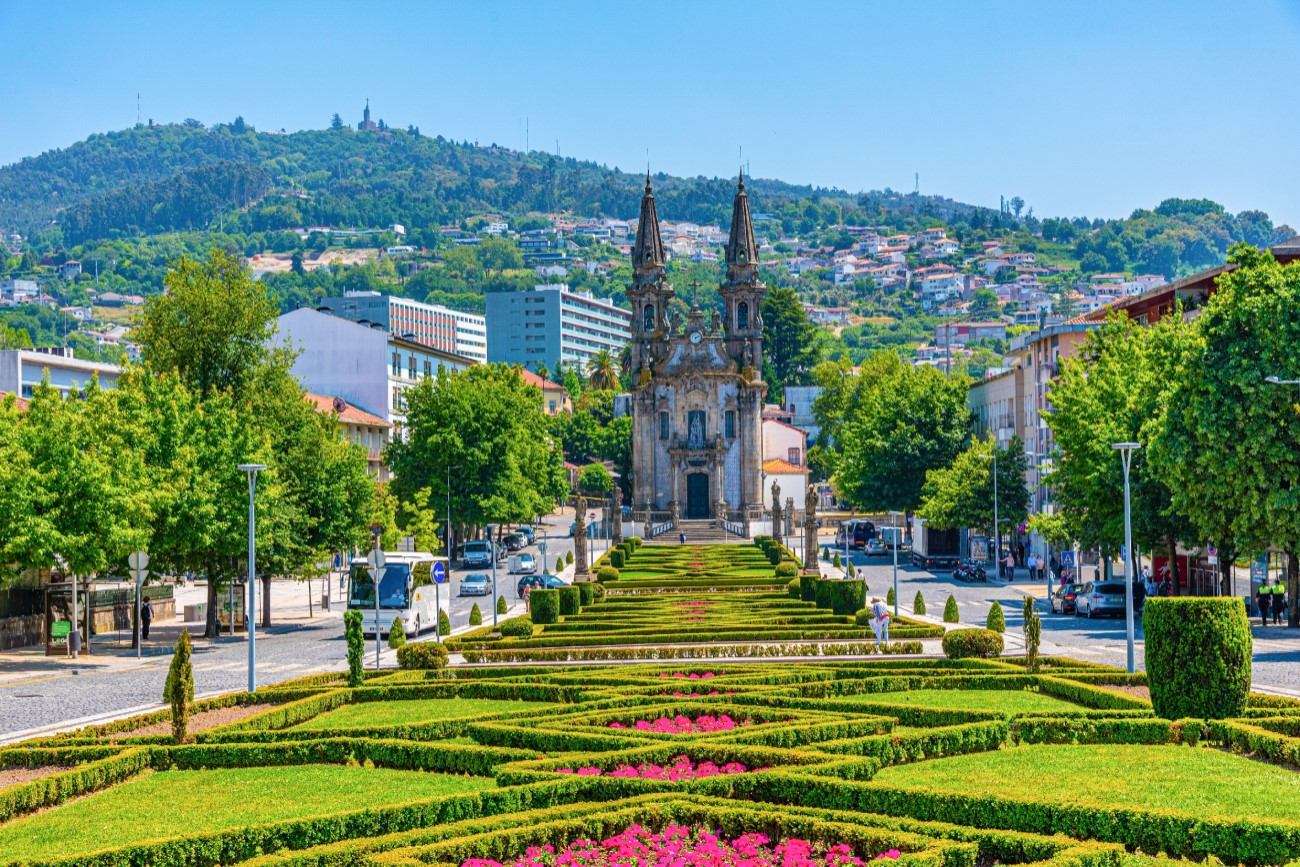 Admire the views from Penha

Before you leave Guimarães, you must visit Serra da Penha, a mountain towering over the city. You can drive up there or hop on a cable car which departs from Rua Aristides Sousa Mendes. The journey only takes a few minutes, but it's a memorable one as you gently rise above the trees, towards the top of the hill.

Standing over 600 metres high, this mountain boasts incredible views over Guimarães. The first thing you'll notice when you arrive is the Sanctuary of Penha. Built in the 1930s, it stands out with its Art Deco exterior and remains a popular pilgrimage site.

Scattered around the woods, you'll find granite boulders, hidden caves and a couple of cafés and restaurants. Other facilities include an equestrian centre, minigolf and a camping site. 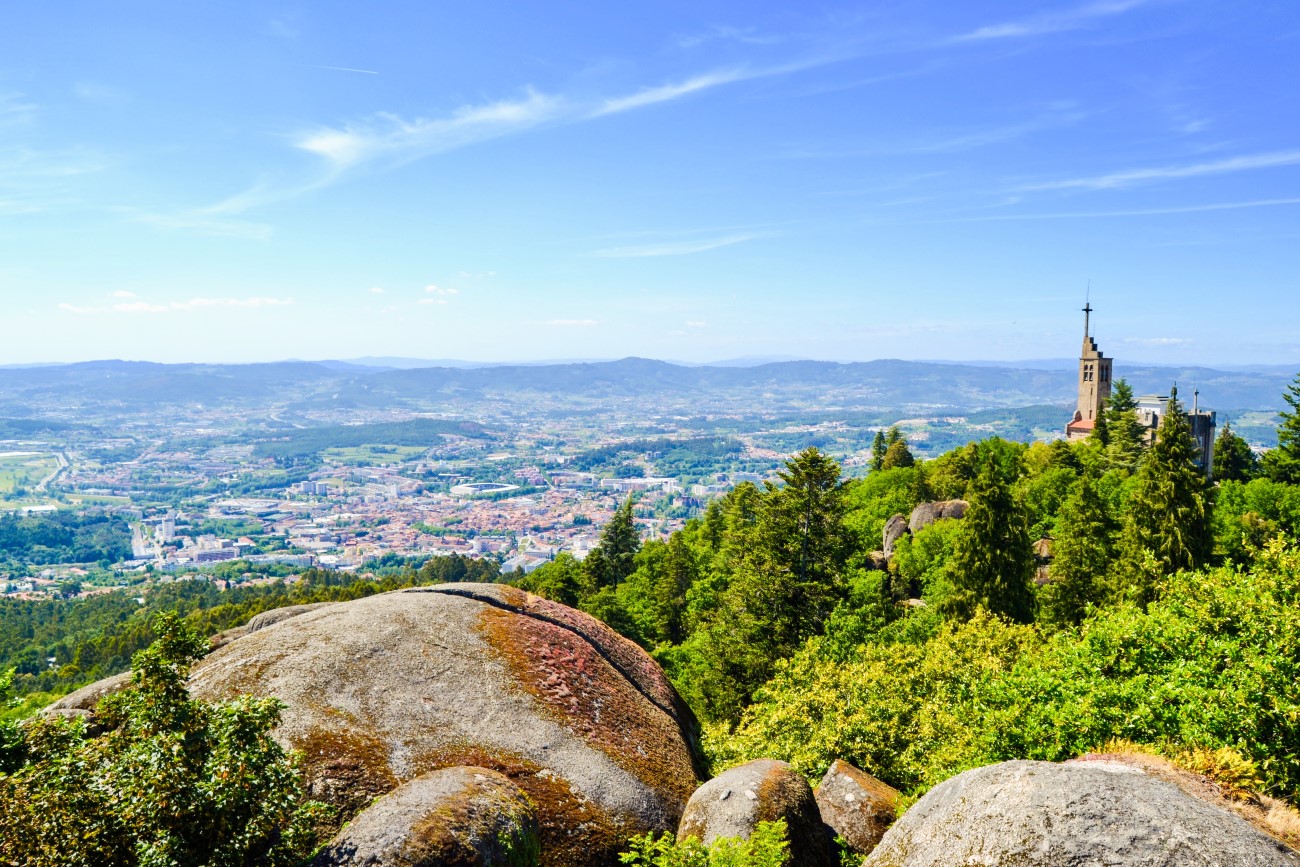 Where To Eat In Guimarães

Resvés​ is a stylish restaurant located in the historic centre. Here you can try a mix of dishes, from pork belly gyozas to garlic shrimp and black Angus steak, all paired with a glass of wine. It’s worth reserving ahead to guarantee a spot.

Last but not least is ​Le Babachris​, a contemporary restaurant run by the French chef Christian Rullán. The menu changes every week but always focuses on fresh and seasonal ingredients. Lunch includes a set meal with starters, main dish and dessert, while dinner is more of a degustation with four or six dishes to try.

Where to stay in Guimarães

If you’re thinking of staying in Guimarães for the night, we suggest booking a room at ​Hotel da Oliveira​ or Pousada Mosteiro de Guimarães​.

Hotel da Oliveira​ is a charming boutique hotel located in the historic centre of Guimarães. It has 20 rooms, and each one includes an art piece inspired by the city’s local history. From the windows, you can see the iconic monument Padrão do Salado. The hotel also offers a restaurant serving traditional Portuguese food, with an outdoor terrace facing Largo de Oliveira.

Housed in a 12th-century convent, ​Pousada Mosteiro de Guimarães​ is a remarkable 4-star hotel. It’s a few kilometres away from the centre, but it’s worth staying here for the historical setting. Set above a hill, the hotel offers incredible views from its rooms, which face the city or the hotel’s gardens. There’s also an outdoor swimming pool, a children’s playground, a bar and a restaurant set in the old wine cellars. Attached to the hotel is the Igreja de Santa Marinha da Costa, which is open to all visitors.