A Traveler's Guide to Granada, Spain

As one of the most famous towns in Southern Spain, Granada simply must be seen to be believed.

Granada has played a major role in the history of Spain and it feels like the intersection of North African and European culture. With stunning architecture, exciting sights and sounds, and delicious food, Granada is sure to become one of your favorite places on earth.

This laid-back city has a lot to offer any tourist. So, to help you make the most of your trip, we’ve put together this handy traveler’s guide to Granada.

Here is everything you need to know to truly enjoy your stay: 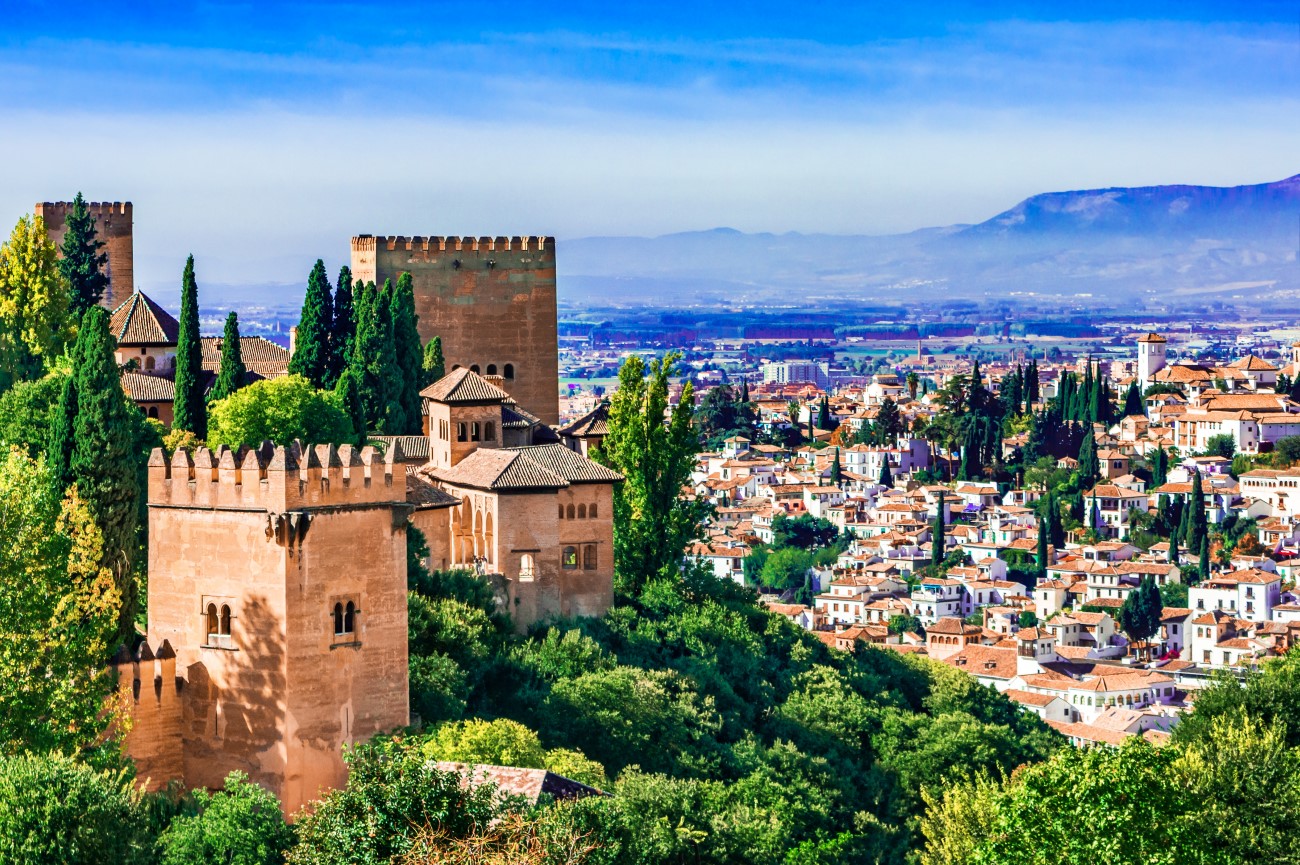 What to See and Do in Granada, Spain

Granada is a beautiful town with a thriving culture and history. Here are some of our favorite things to see and do in Granada:

A trip to Granada would not be complete without a visit to the Alhambra.

Situated high above the city, the Alhambra, or “Red Castle” is a UNESCO World Heritage site and has been named one of the 7 wonders of the modern world. Known for its beauty and splendor, it is one of the most popular tourist sites in all of Spain.

Originally built in 889 AD as a small fortress on top of the ruins of a Roman fortification, this site was largely ignored until the middle of the 13th century when Mohammed ben Al-Hamar, the first ruler of the Nasrid dynasty built the structure that exists today. In 1333, Yusef I, Sultan of Granada, used the Alhambra as a royal palace. In 1492, after the Christian Reconquista, the palace became the royal court of King Ferdinand II and Queen Isabella I.

Inside the palace, you will find breathtaking examples of Islamic architecture and a number of rooms decorated with intricate geometric designs. 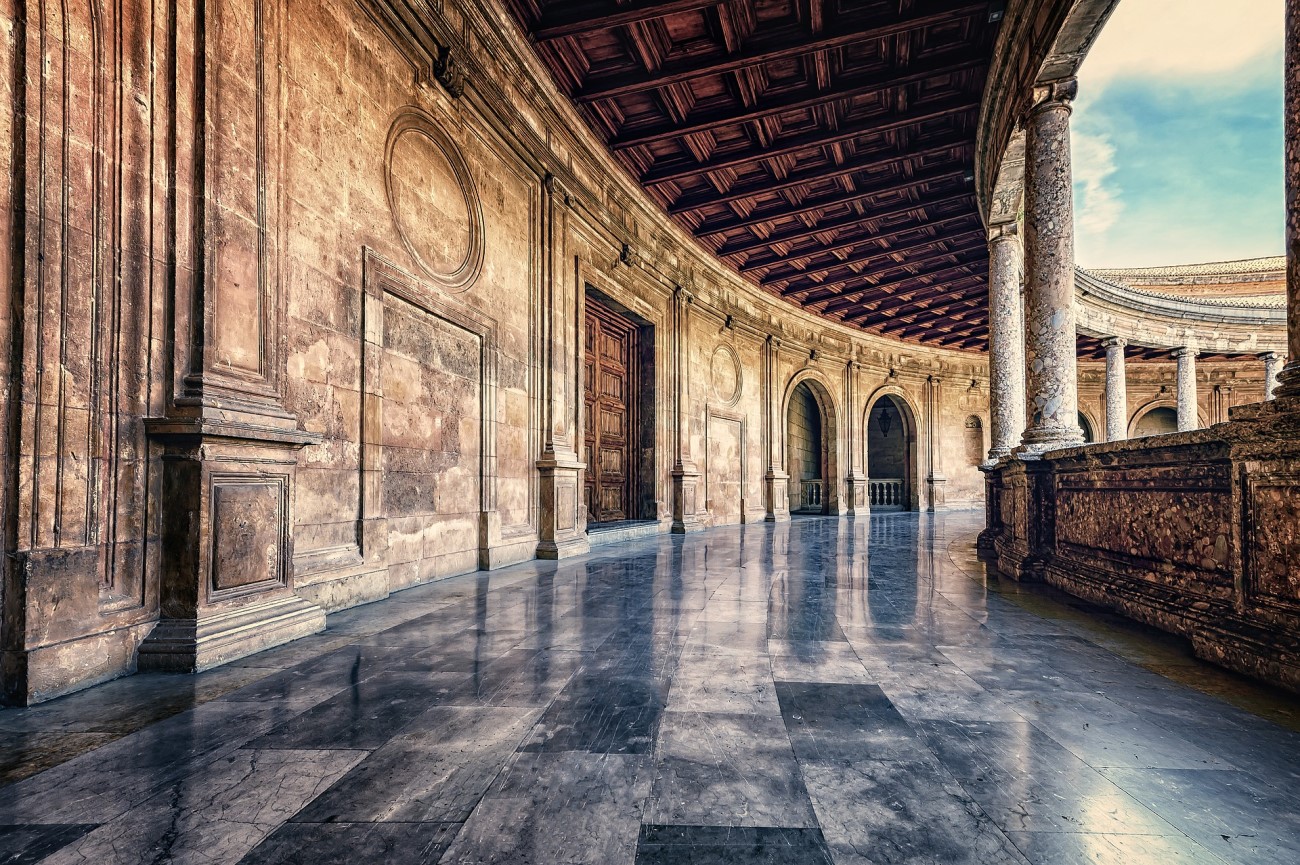 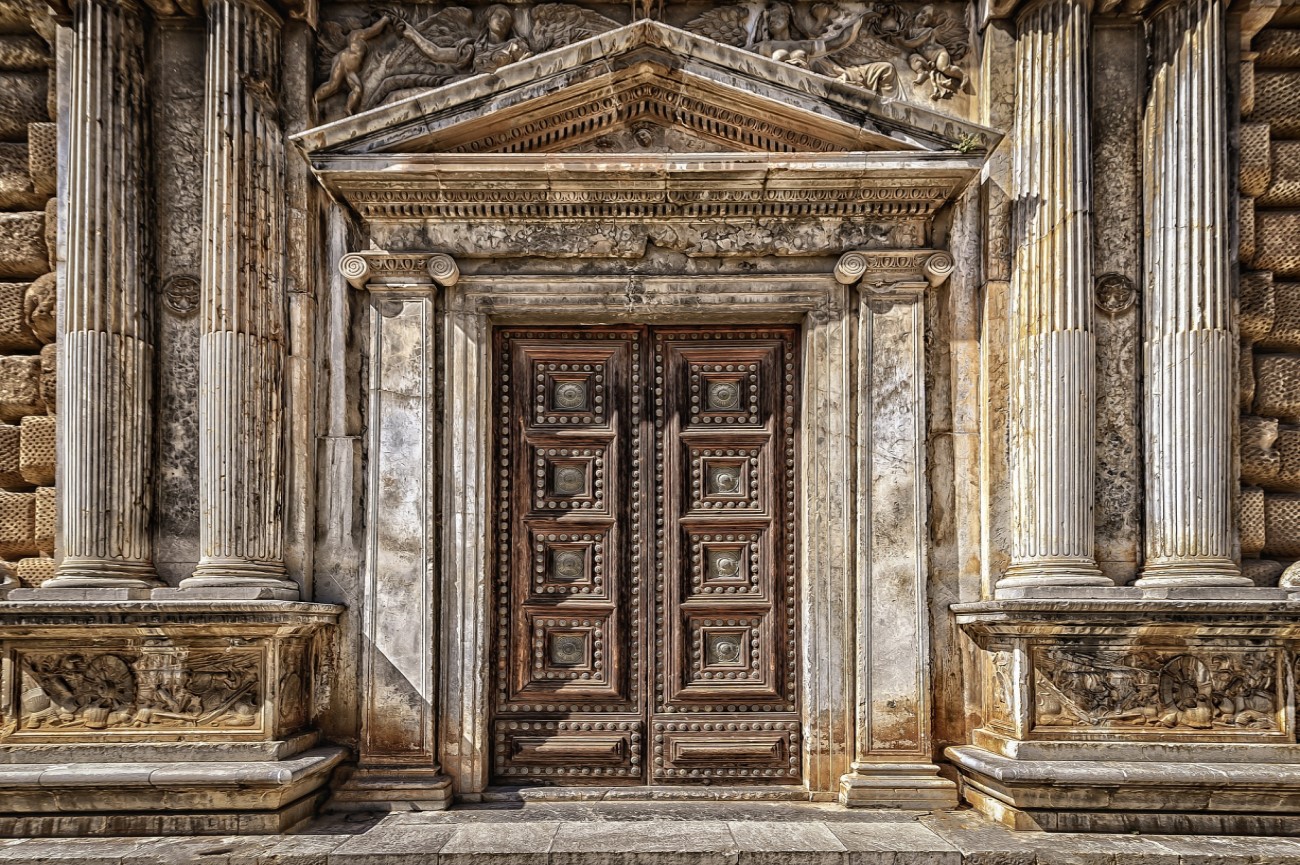 Some of the noteworthy spaces inside the Alhambra include:

Pro Tip: Admission into the Alhambra complex is limited to 6,600 visitors a day so it is important to get your Alhambra ticket in advance to avoid disappointment. 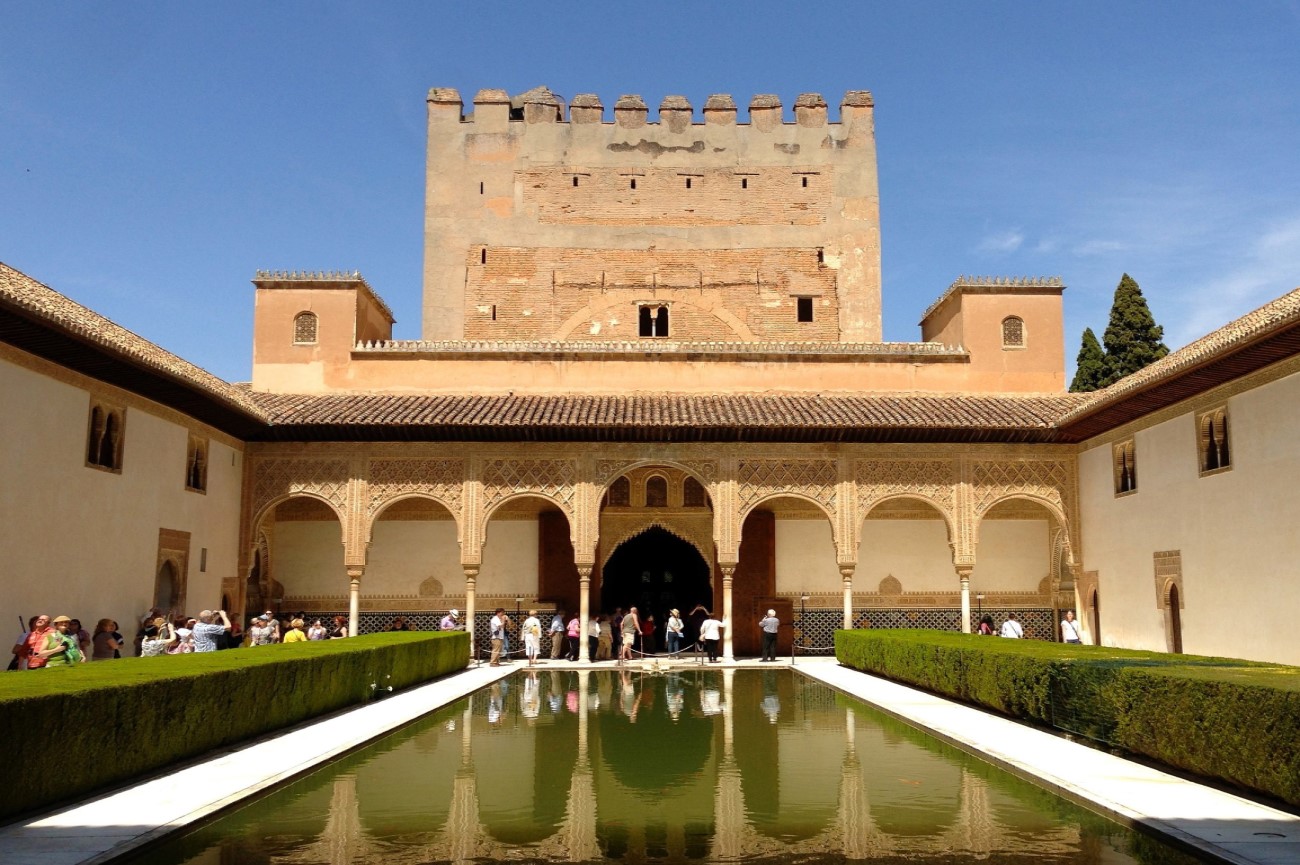 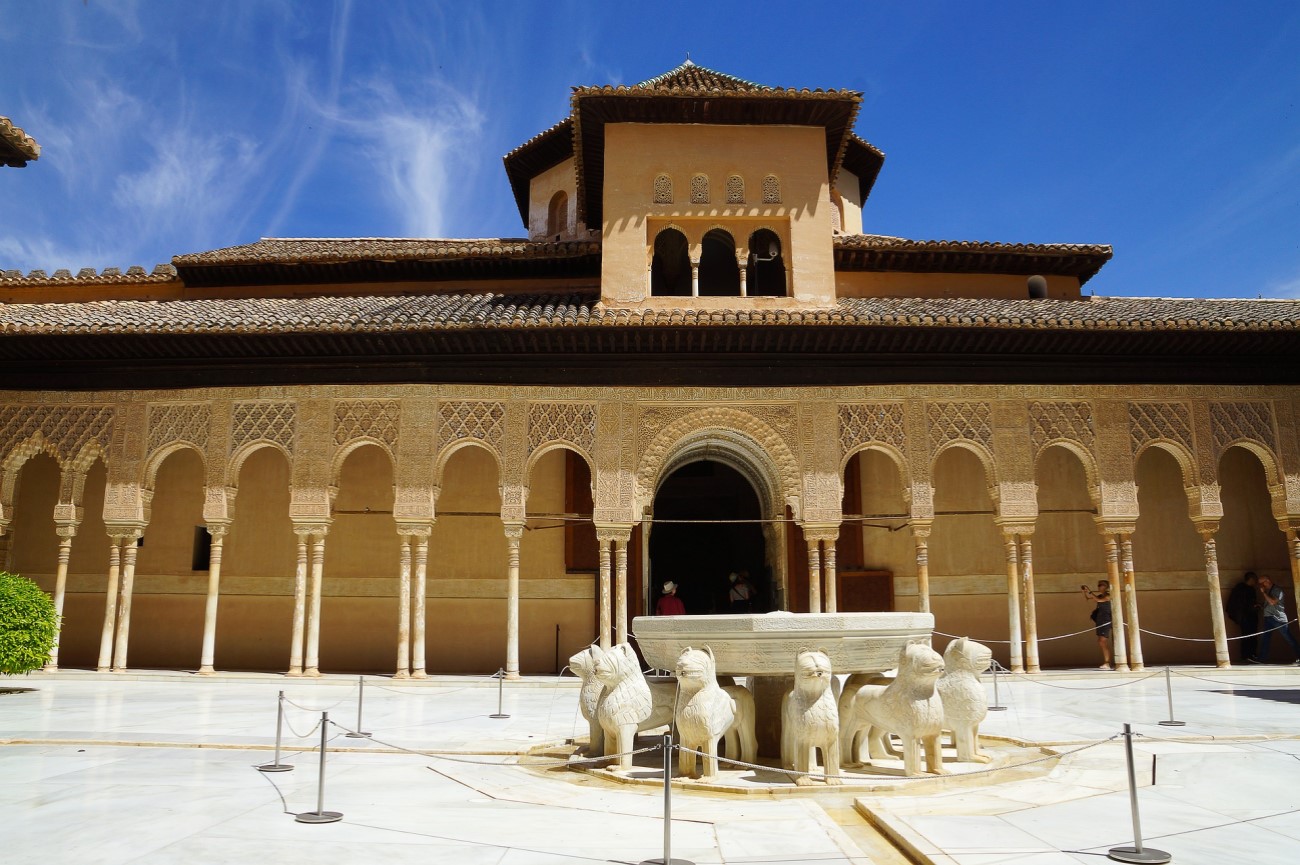 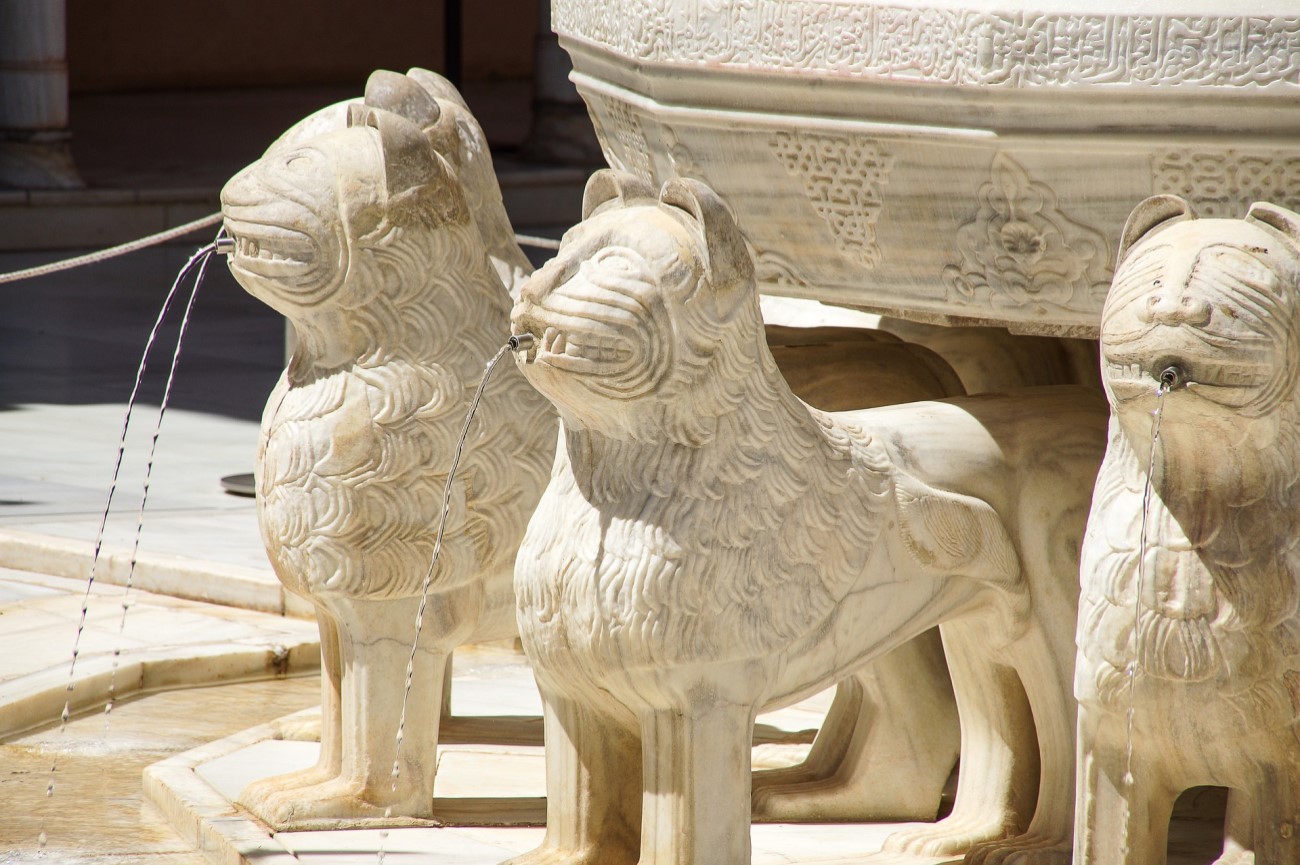 Fountain of the Court of the Lions, Alhambra palace, Granada, Andalusia, Spain

Located near the Alhambra are the Generalife Gardens. This spot was designed as a place of relaxation for the Sultans that lived in the palace. The original design dates back to the 13th century and the reign of Muhammad III and today is held up as one of the best-preserved Moorish gardens in Spain. The gardens consist of two parts, the Gardens of the Jardím de la Sultana or Sultana’s Gardens and the Patio de la Acequia, or water-garden terrace.

The Patio de la Acequia is comprised of four parts that are crossed by the Acequeia Reial, a 6km canal that is used to irrigate the gardens. This section contains a long pool framed by flowers, pavilions, and colonnades. The garden’s walkways are paved in Granada’s traditional style using a mosaic of white pebbles from the River Darro and black pebbles from the River Genil. 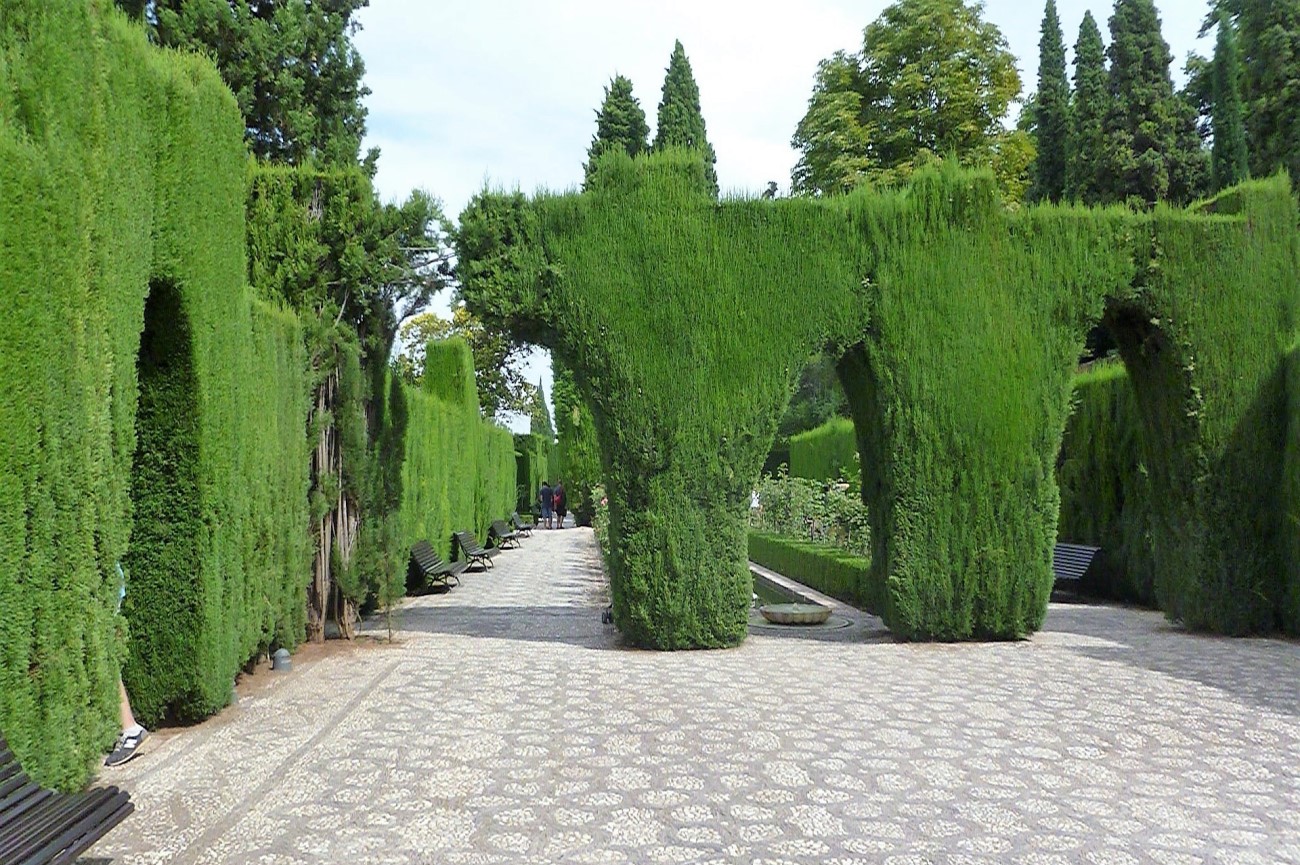 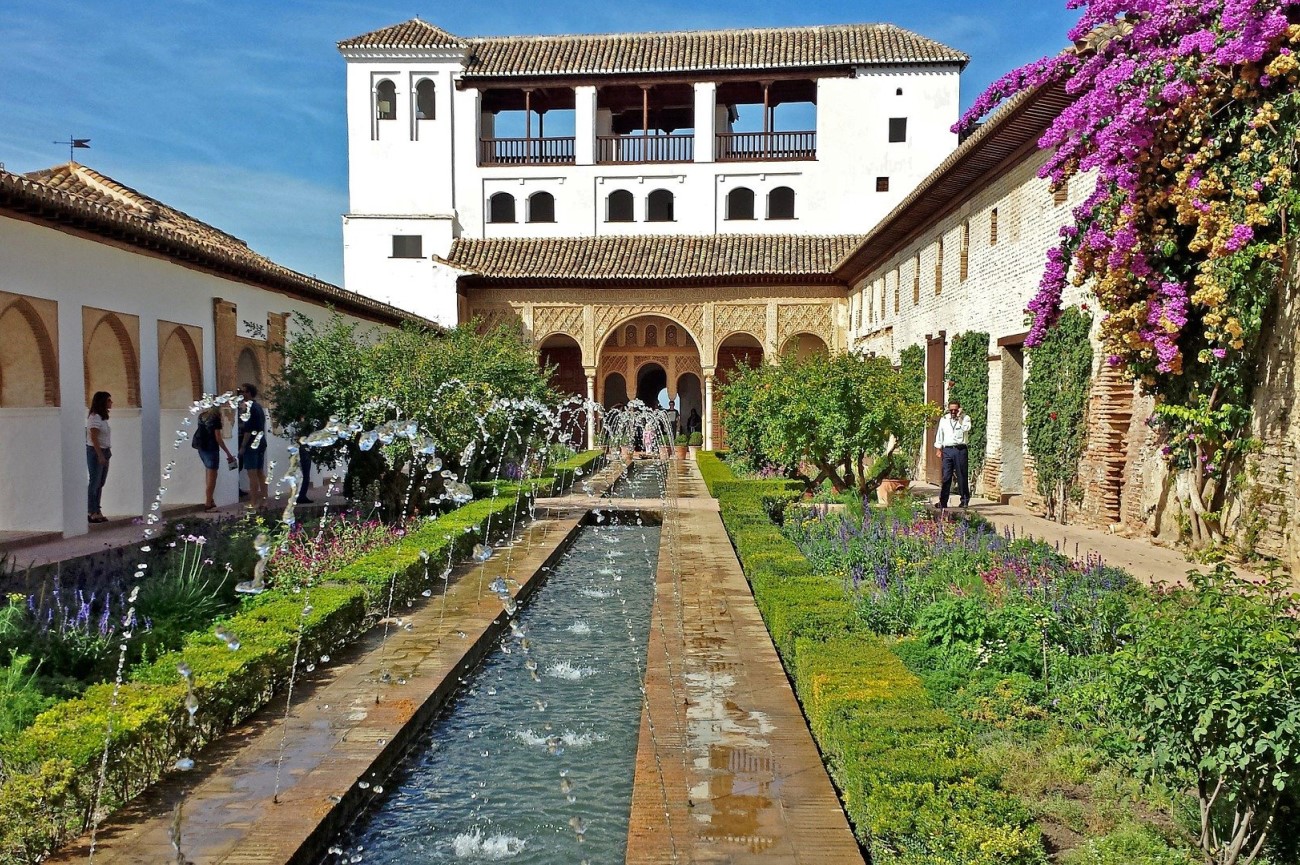 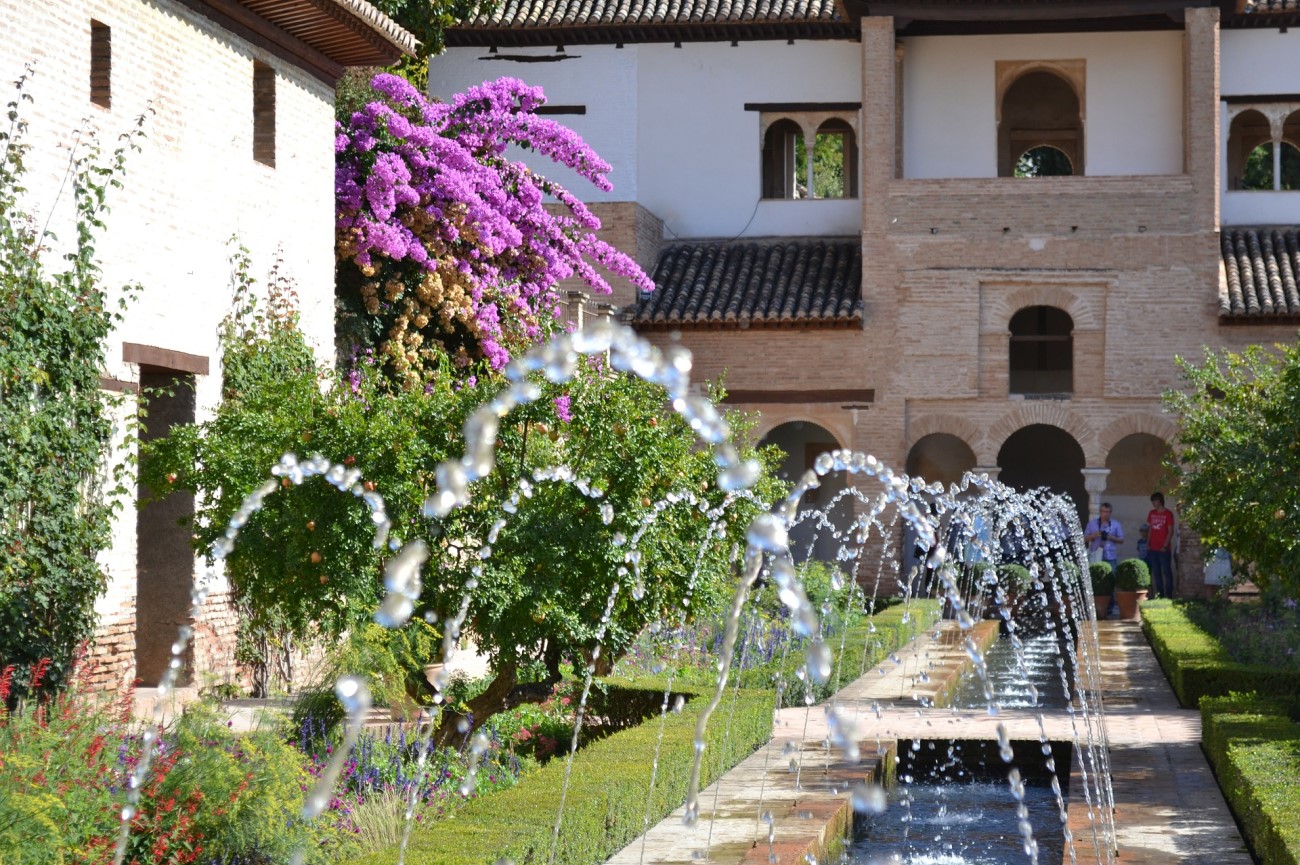 Built by Queen Isabella following the conquest of Granada, the Granada Cathedral or Cathedral of the Incarnation is a stunning testament to the beauty oh the Spanish renaissance.

Construction began in 1518 on the site of an ancient mosque. The cathedral consists of five naves that connect to make up the shape of the cross. Each nave is a different height with the largest at the center.

The interior is adorned with stunning white and gold accents that demonstrate the wealth of the Spanish kingdom. The main chapel has a series of Corinthian columns that support the entablature and above that, is a series for gorgeous stained glass windows. 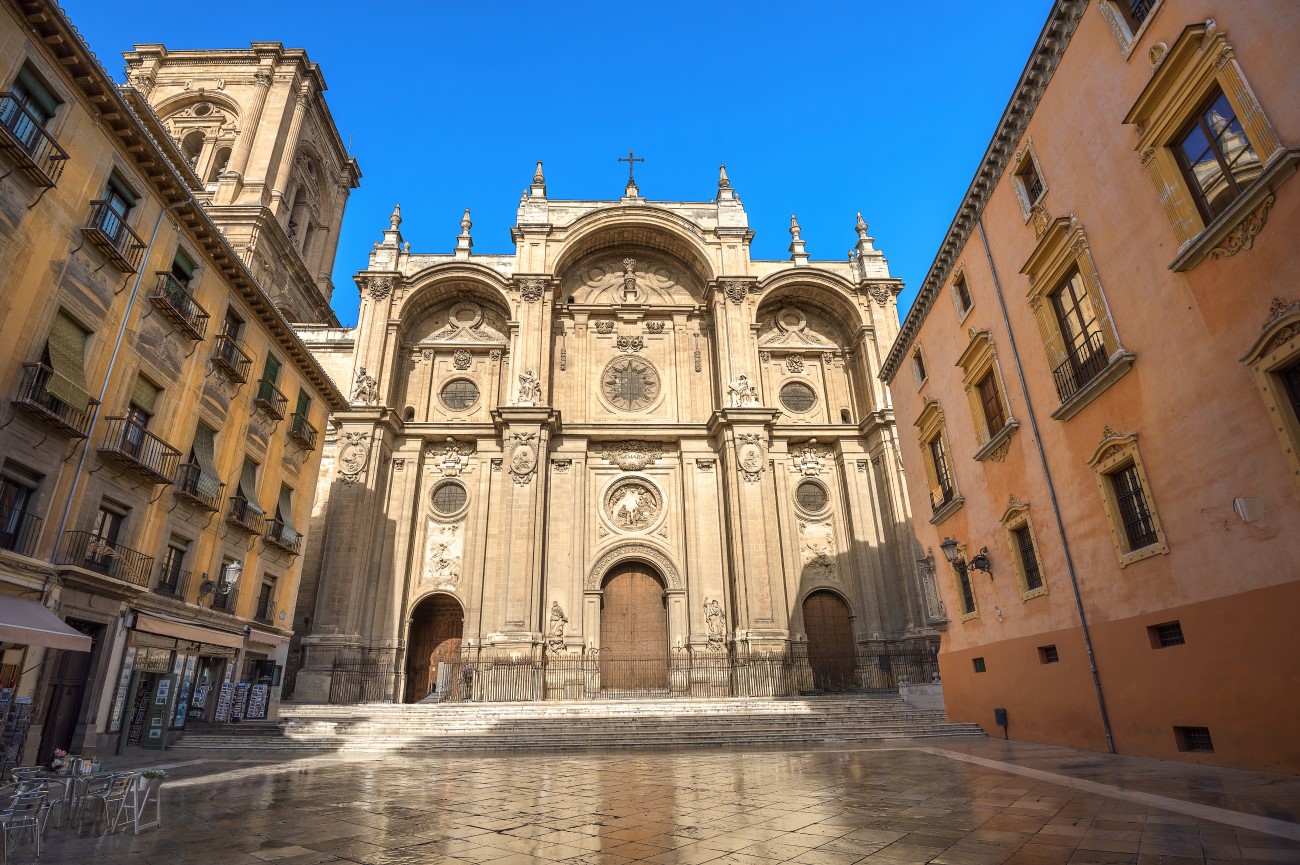 Cathedral of Granada in Andalusia, Spain

Near the Granada Cathedral is the Plaza Nueva. While it may be named the ‘new square,’ this plaza is the oldest in Granada.

This pedestrian plaza is surrounded by bars, restaurants, and shops. It is the perfect place to grab a meal, have a drink on the terrace, or just sit and watch the world go by.

Located in the city center, Plaza Nueva played an important role in Granadian life and culture. It was here that they used to hold important events like games, tournaments, and bullfights. Today, it is here that you will find historic buildings like Royal Chancellery and the House of Pisa.

The plaza itself stands as a testament to the architecture that is characteristic of Southern Spain and the Andalusia region in particular. 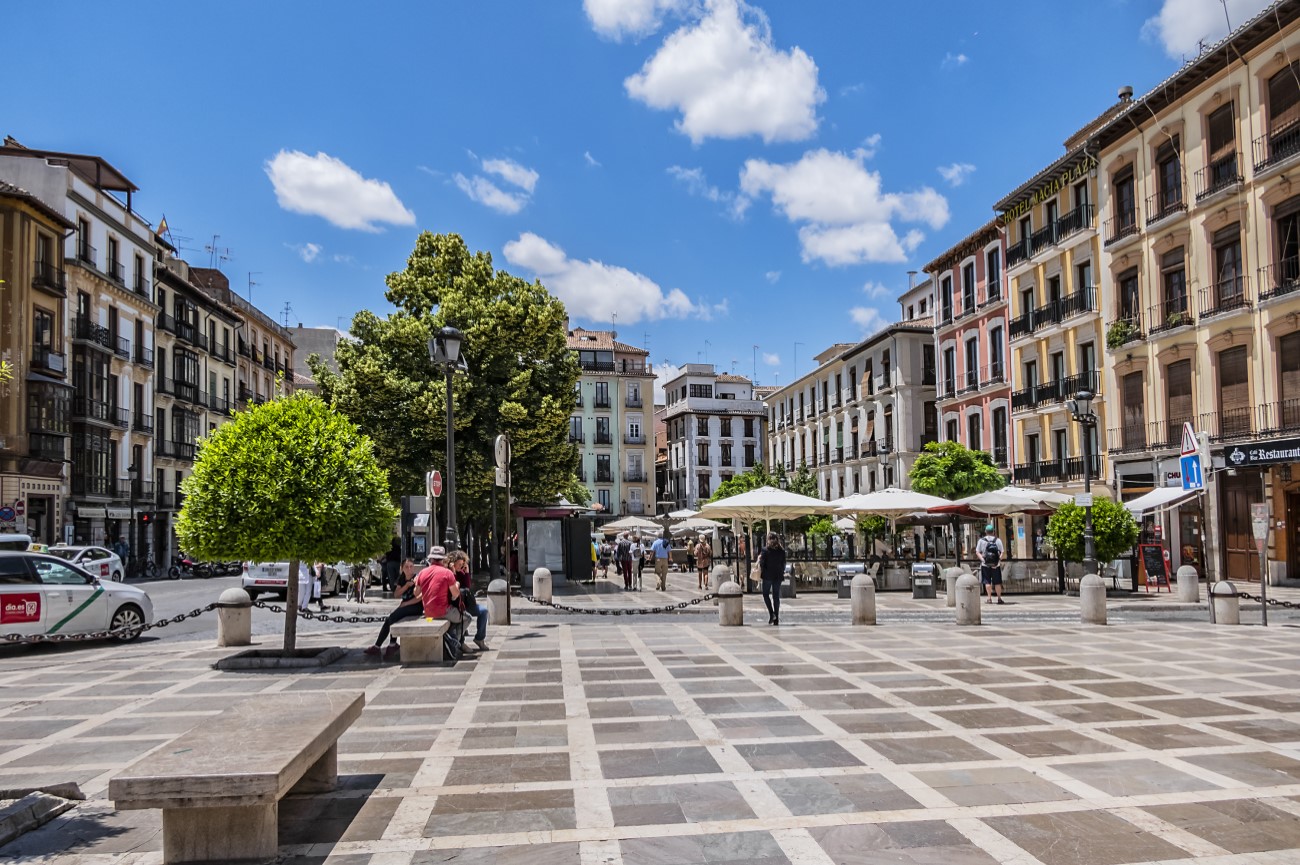 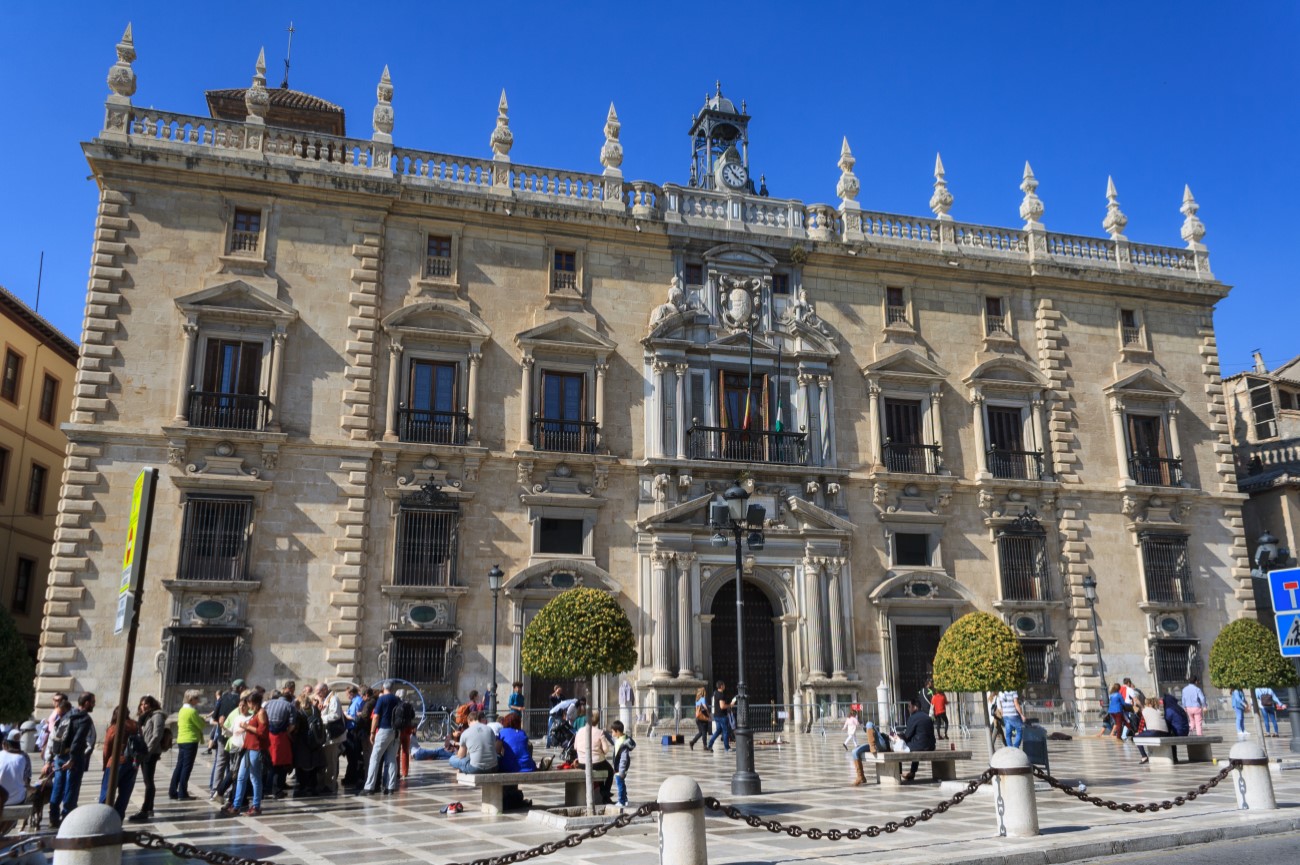 Take in the Views (and a Sunset!)

Mirador de San Nicolas is in the Albaicin neighborhood of Granada and offers some of the most spectacular views imaginable. This spot provides a panoramic view of the city, the Alhambra, Generalife Gardens, and the Sierra Nevada mountains. For a real treat, try to time your visit for sunset. It is said that this location offers the best sunsets in the world!

The magnificence of the sunrise and sunset is not a secret so Mirador de San Nicolas can get a little crowded at these times, in particular. So, if you are looking for an alternative, head about a 10-minute walk east to the Sacromonte neighborhood and the Mirador De La Vereda De Enmedio. 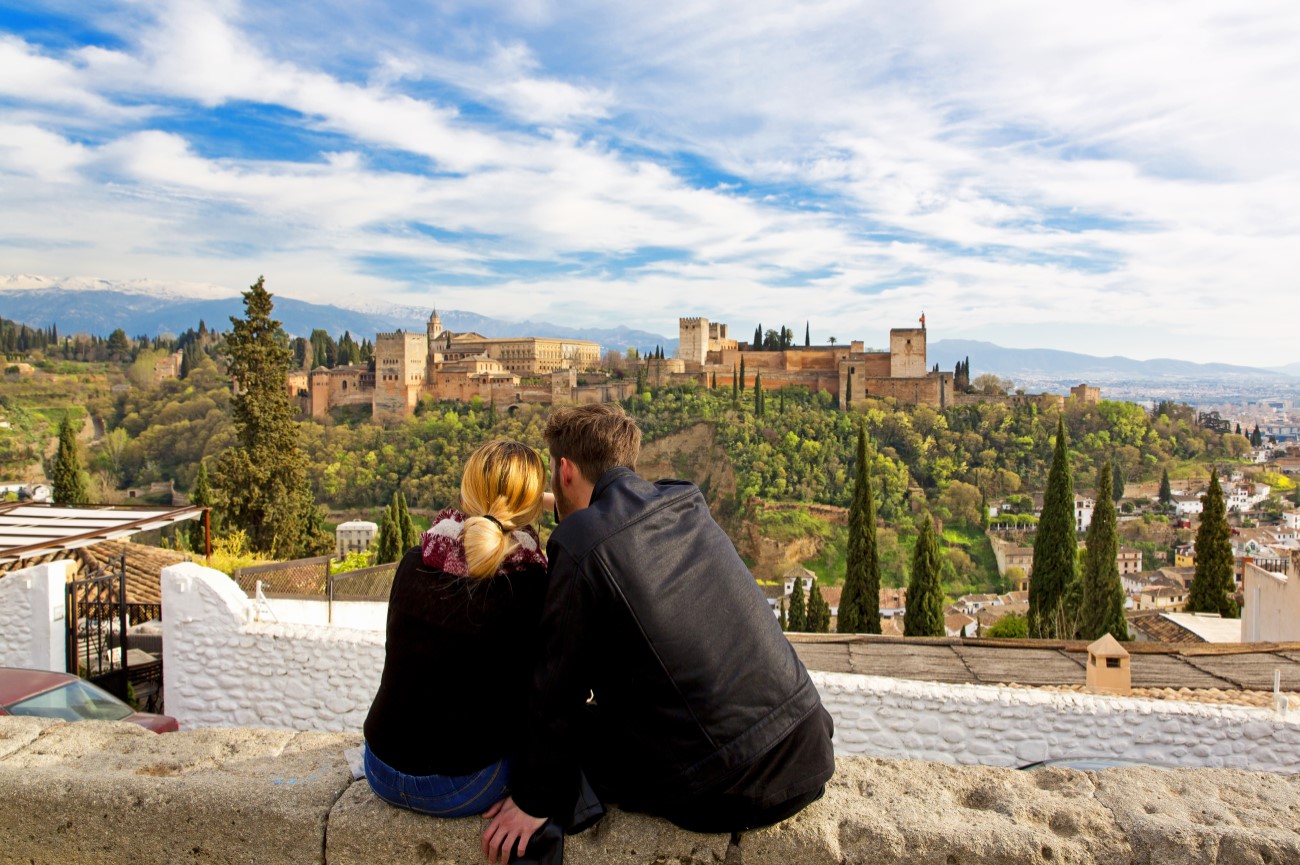 Mirador de San Nicolas is in the Albaicin neighborhood of Granada, Spain

Ermita de San Miguel church in Sacromonte is another worthwhile option. To get there, take the steps from Calle Cruz de la Rauda or walk from the Carril de San Miguel.

When planning your visit to these places, consider grabbing a bottle of local wine and some food. Find a little spot, throw down a blanket, and let the scene unfold before you. 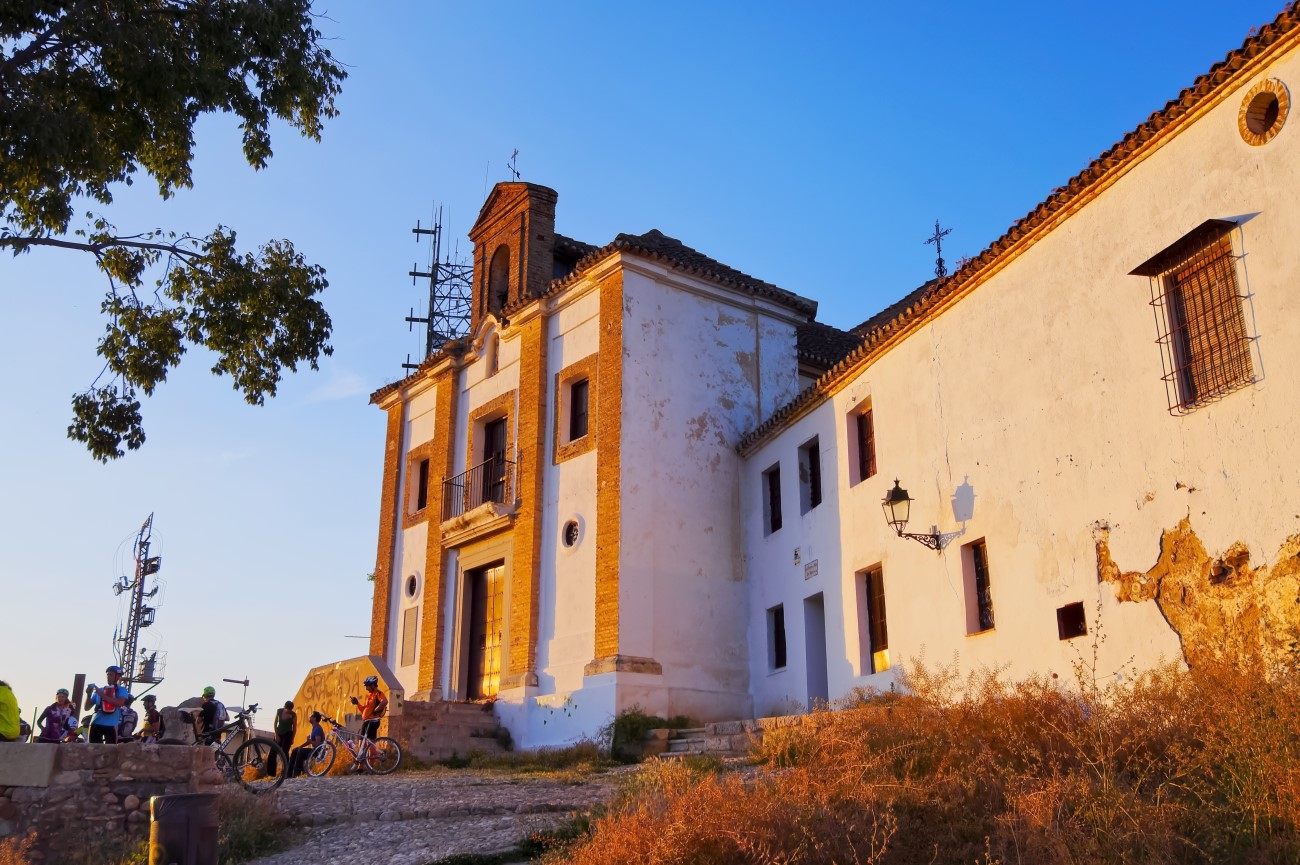 Paseo de Los Tristes, or Promenade of Sad Ones, is a great place to take pictures of the Alhambra.

This promenade lies along the River Darro, between the hills of the Alhambra and the Albaicin,  and starts at the Bridge of the Chirimias. It got its sad name because this is where the funeral processions used to pass on their way to the cemetery.

Dating back to 1609, the promenade lies below the Alhambra, offering up some interesting views. Until the 19th-century, Paseo de Los Tristes was once the most used public spaces in Granada. Along this walk, you will find a number of medieval buildings, a 17th-century fountain in the middle, and places to sit, relax, and enjoy. 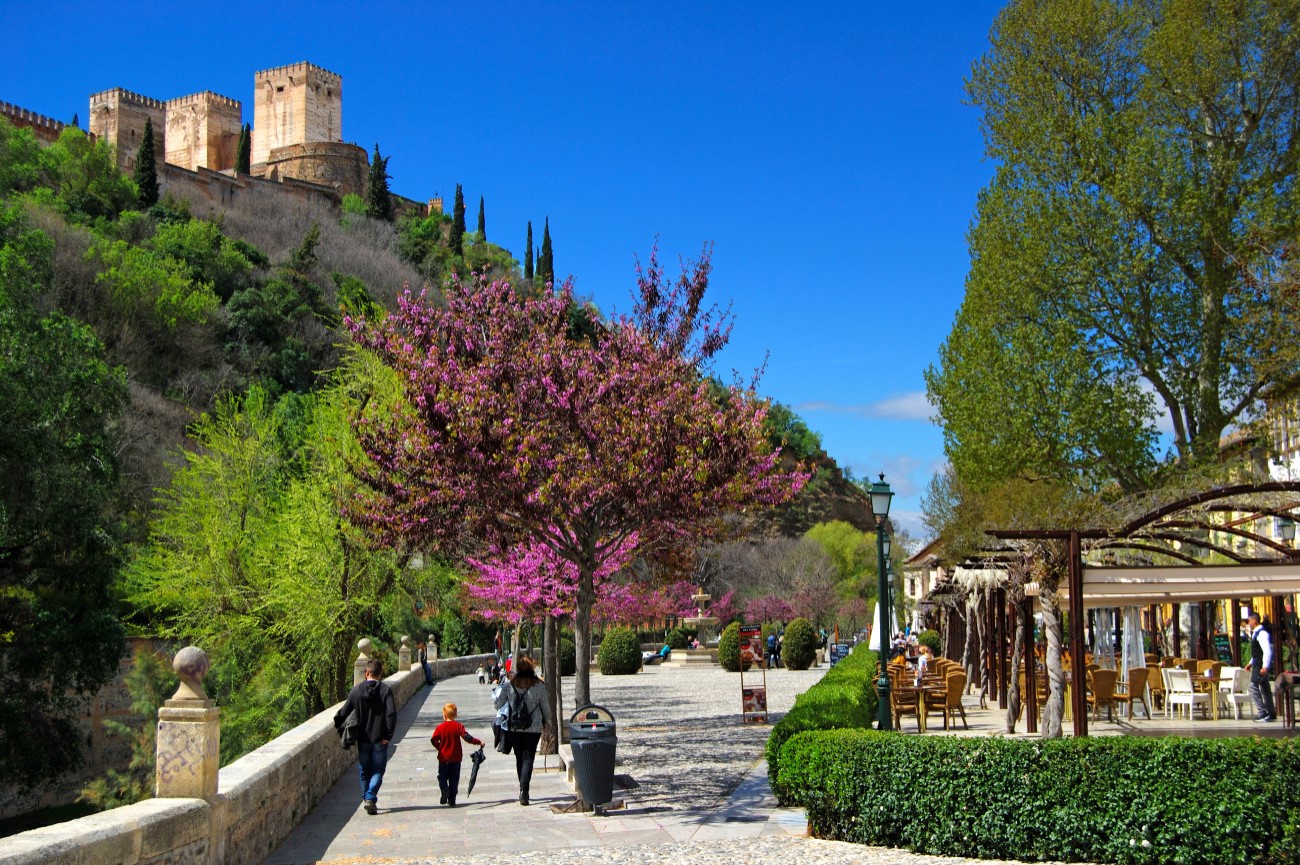 Talk in a Flamenco Show

Flamenco dancing is an important part of the culture in Southern Spain. Flamenco is both a style of music and a style of dance. While it was influenced by the Romani people, its style is unique to the Andalusians.

The movements of Flamenco are powerful, raw, and sensual. Attending a Flamenco show will be an intense experience that you will not soon forget.

There are many great venues spread throughout the city and it is not unusual to catch a group of street performers demonstrating their Flamenco skills. 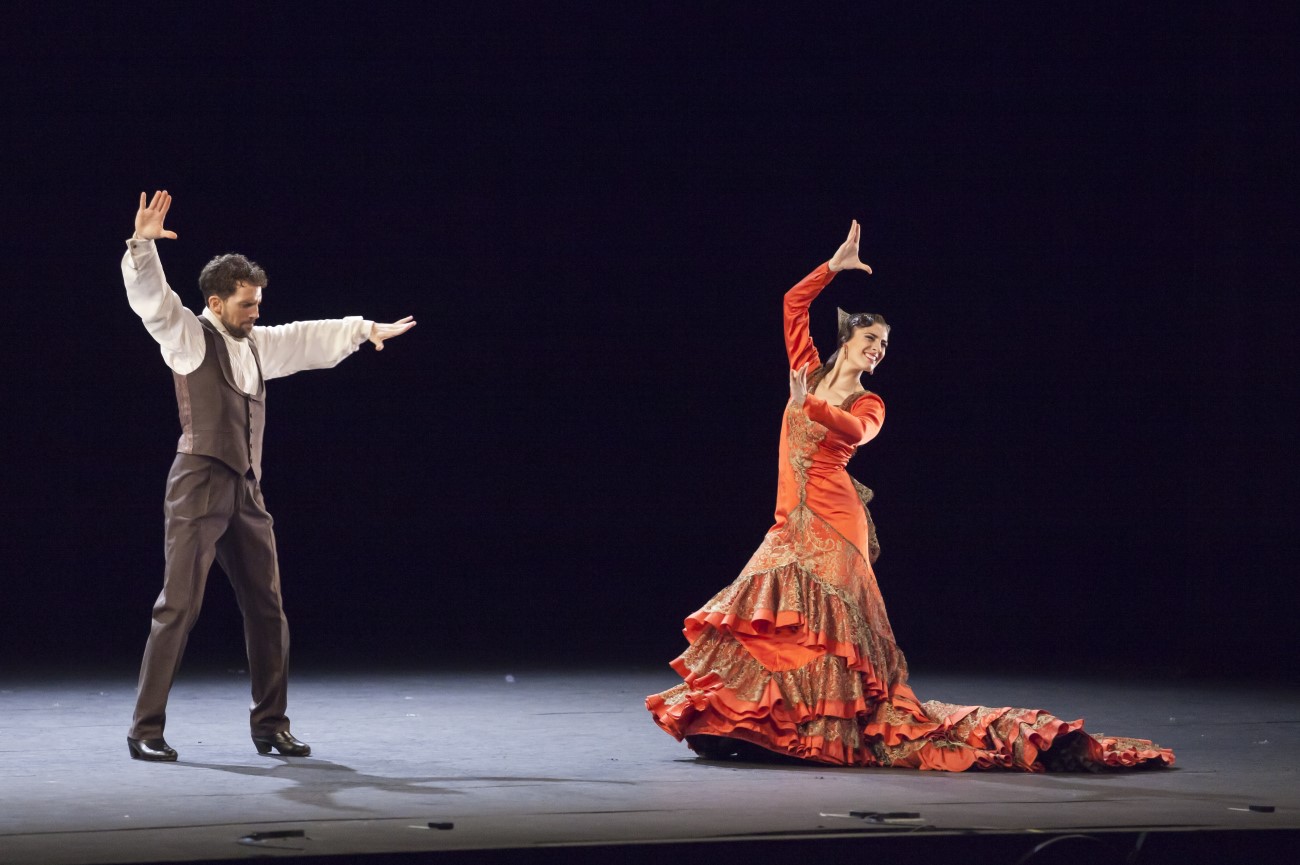 If you are planning on taking a guided tour of the Sacromonte caves, look for a package that includes a Flamenco show in one of the many caves.

But for true authentic Flamenco, go where the locals go to see a show: Pena la Plateria. Public performances are held Thursday nights at 10pm. Call ahead to book a ticket and then arrive early to make sure you get the best view possible. You will not be disappointed. 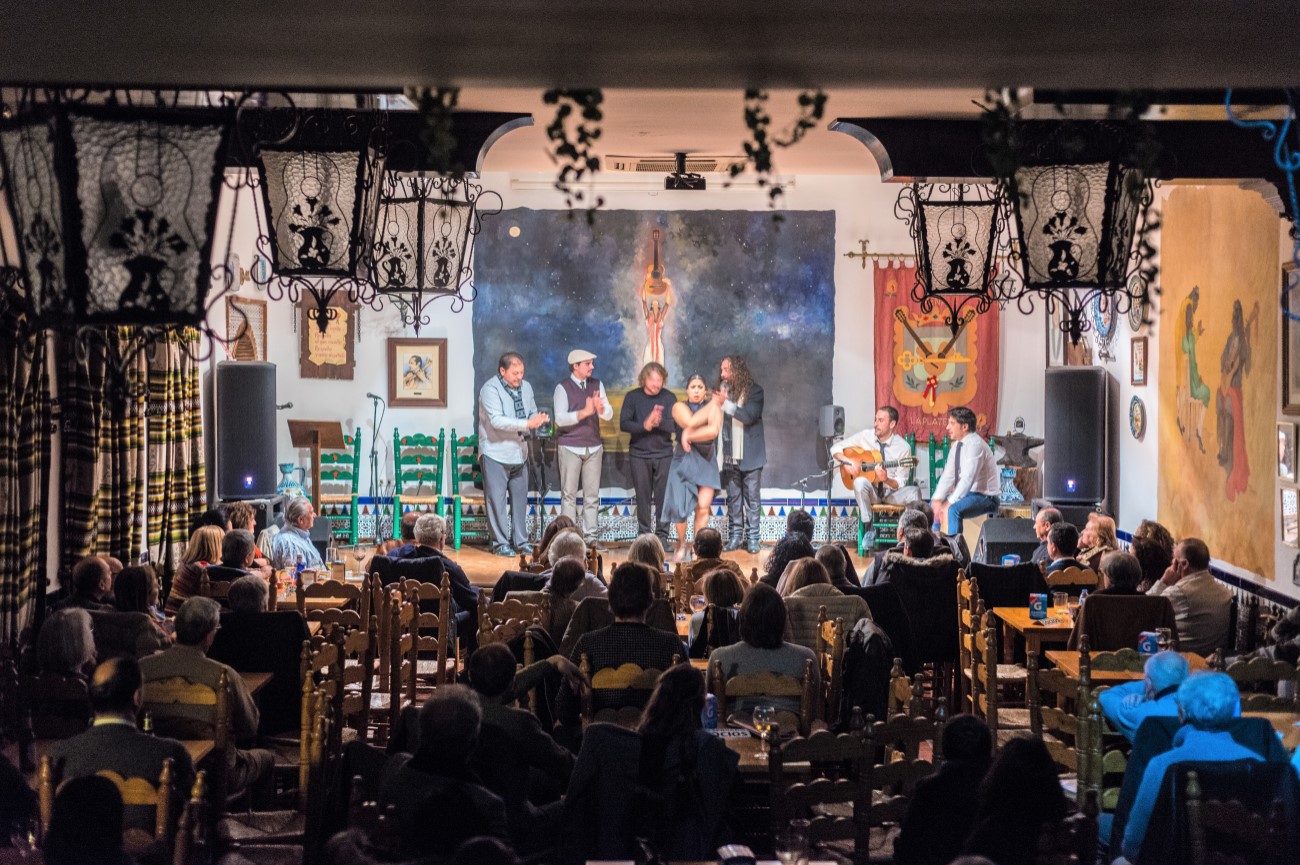 Granada is the perfect place to base your Spanish vacation as there are several nearby day trips that warrant exploration.

The coastline in Granada is known as Costa Tropical and to the west, lies Costa Del Sol. Here you will find amazing beaches and attractions.

You can explore the caves of Nerja, play a round of golf at top courses including Finca Cortesin in Casares, widely held as the best course in Spain. Relax at Burriana Beach or visit the old shops in Marbella Old Town, or, get out on the water for a whale or dolphin watching tour. 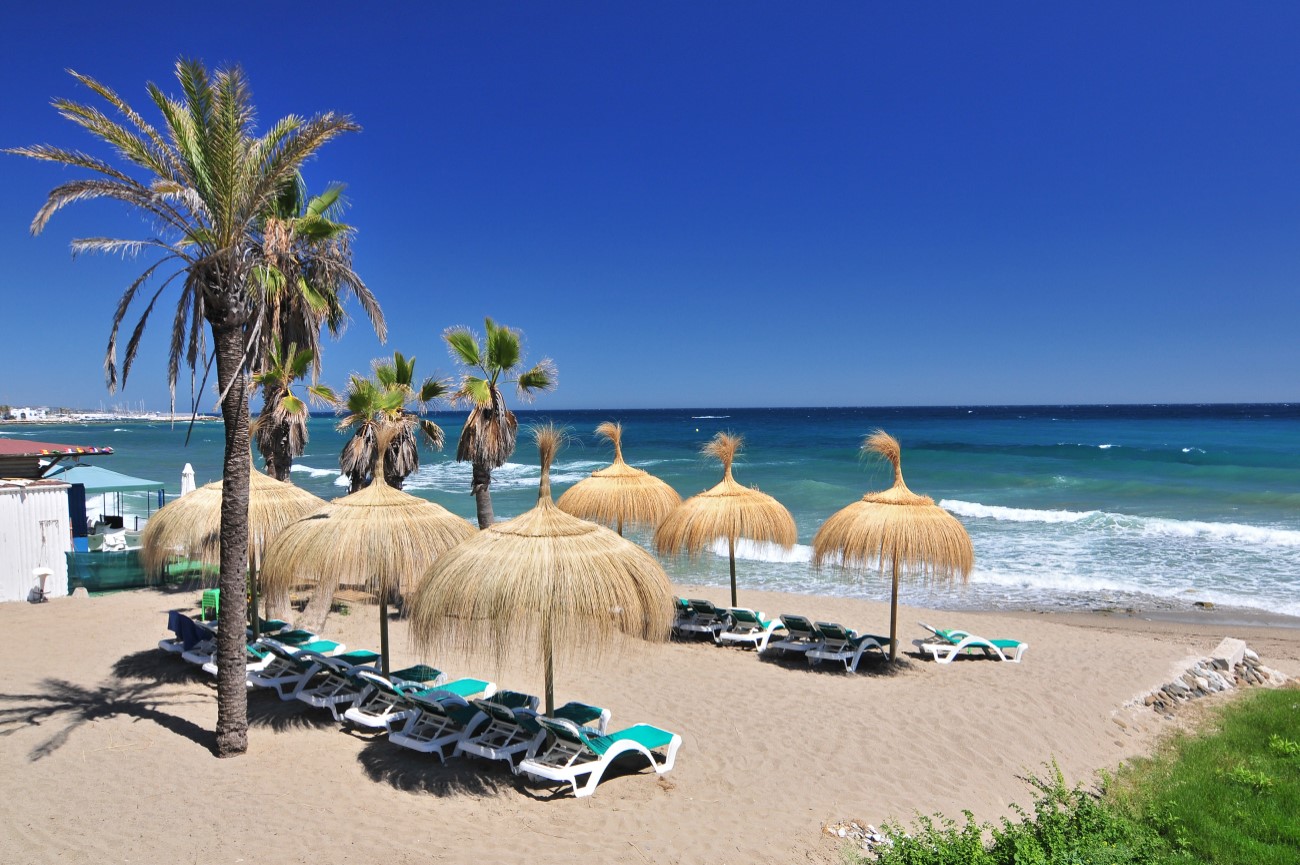 Malaga is a resort town on the Costa Del Sol. It is the birthplace of Pablo Picasso. A palace has been converted into a Picasso museum but if art isn’t your thing, it is here that you will find the Alcazaba fortress and above that, the ruined Gibralfaro castle. Below the Alcazaba, you can see the ruins of a Roman amphitheater. 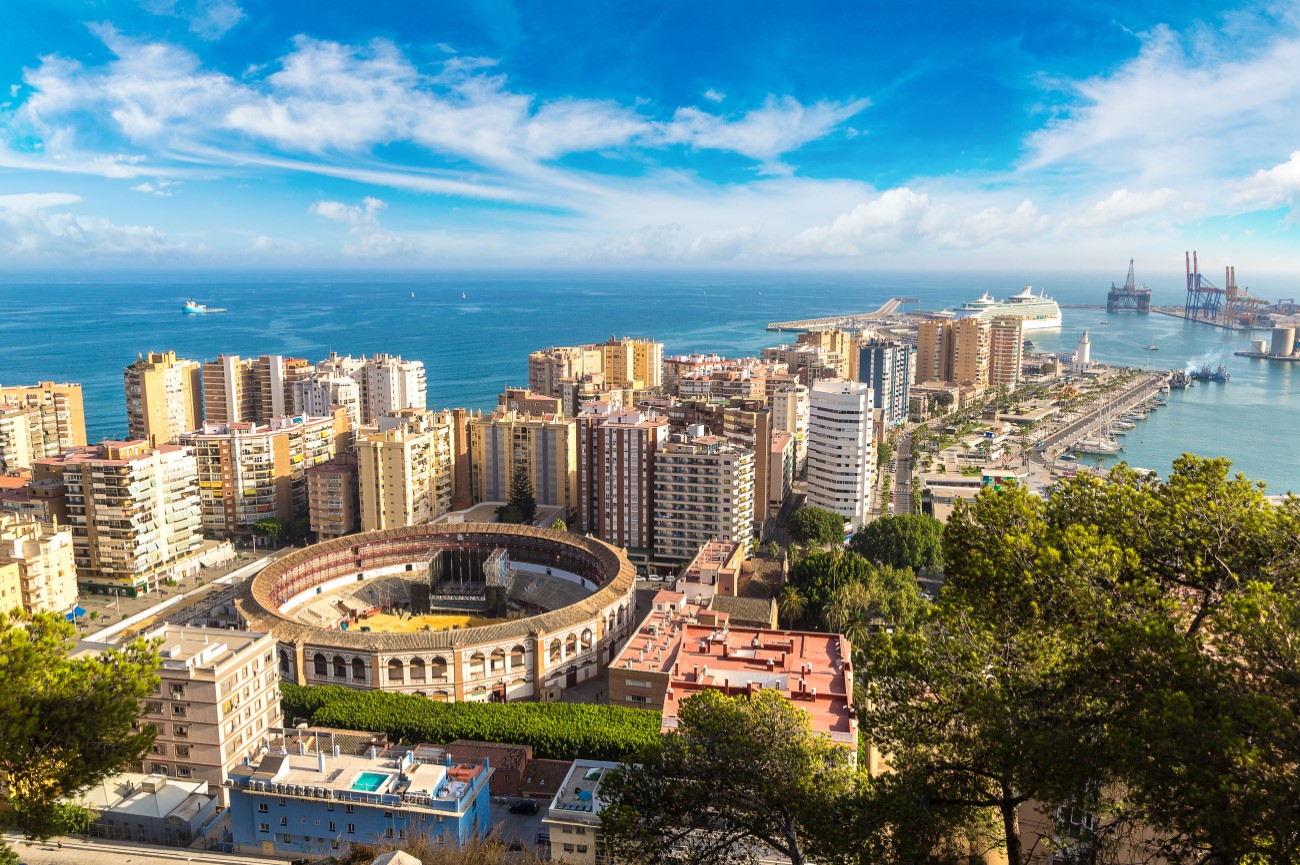 In about 2.5 hours by car, you can be in the city of Seville. There are lots of interesting things here to explore. Talk a walking tour of the Plaza de España and Santa Cruz Quarter and learn the interesting history of Seville and its influence over the country as a whole. Take a Flamenco workshop or sample some world-famous sherry or tapas. 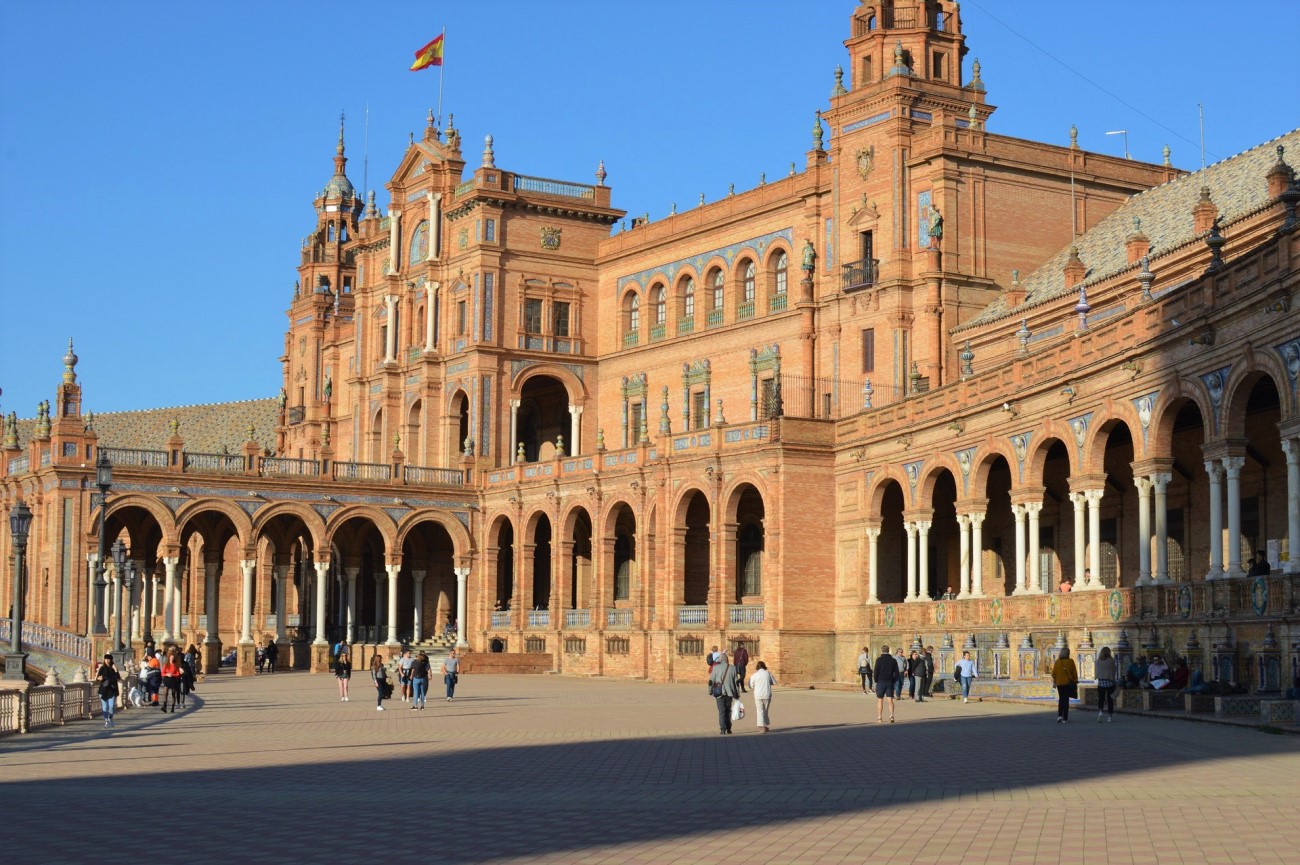 Where to Eat in Granada, Spain

Like many cities in the Mediterranean, Granada has a wonderful selection of foods and beverages that you simply have to try! Here is a brief rundown of some of our favorite places to eat in Granada:

This tapas bar can be found near the cathedral. It is one of several in the area that offers free tapas with each round of drinks. The bar presents an atmosphere that is as great as the food. Try the spicy fortified wine known as vermut. It is brewed in massive barrels that you can see just behind the bar. Don’t leave without ordering the jamon Iberico, some of the best ham anywhere on earth!

A trip to Granada without sampling a little seafood would be a complete waste. Puesto 43 is a Michelin starred restaurant that is dedicated to serving the freshest seafood in an authentic, relaxed environment. This restaurant is geared towards locals so you won’t find any tourist-friendly shortcuts here! Just quality!

The octopus in black ink, the king-size prawns, and the red snapper are some of the restaurant’s most popular dishes.

Where to Stay in Granada, Spain

When planning to stay in Granada, here are some places worth considering.

This 5-star luxury hotel will make you feel like royalty. The beautifully decorated rooms offer a view of the Alhambra and Granada below. This is the palace where foreign dignitaries and monarchs come to stay, including the Dalai Lama and the Prince of Wales.

The hotel’s restaurant not only offers a stunning fusion menu, but it also has stunning panoramic views of the city. Take time to sit out on the terrace. Here you can enjoy a custom cocktail and watch the sky flash glorious colors at dawn and dusk.

Located in the old town, near the  Plaza Nueva, is the charming boutique hotel, Anacapri Granada. Rooms are clean and bright and provide an updated take on a classic look.

The hotel offers cafeteria and bar service but does not have a restaurant on site. But that’s okay, walk out the front door, and you are spoilt for dining choices.

Concierge services at the hotel can help you book tickets for the Alhambra, Flamenco shows, and many other popular attractions.

Granada, Spain is an exciting and beautiful place to visit. If you’d like to book a trip to the city, consider our Sound and City of Granada package. If you prefer a bespoke experience, reach out to us today and we can help you plan the trip of a lifetime.