What to Do When Visiting Seville

Seville is the capital city of the Andalusia region of Southern Spain. As such, it offers a wide array of sights to see and places for visitors to explore.

To help you navigate this incredible city, we’ve put together our list of the top Seville attractions. Here’s an overview of just some of what you can do in Seville, Spain. 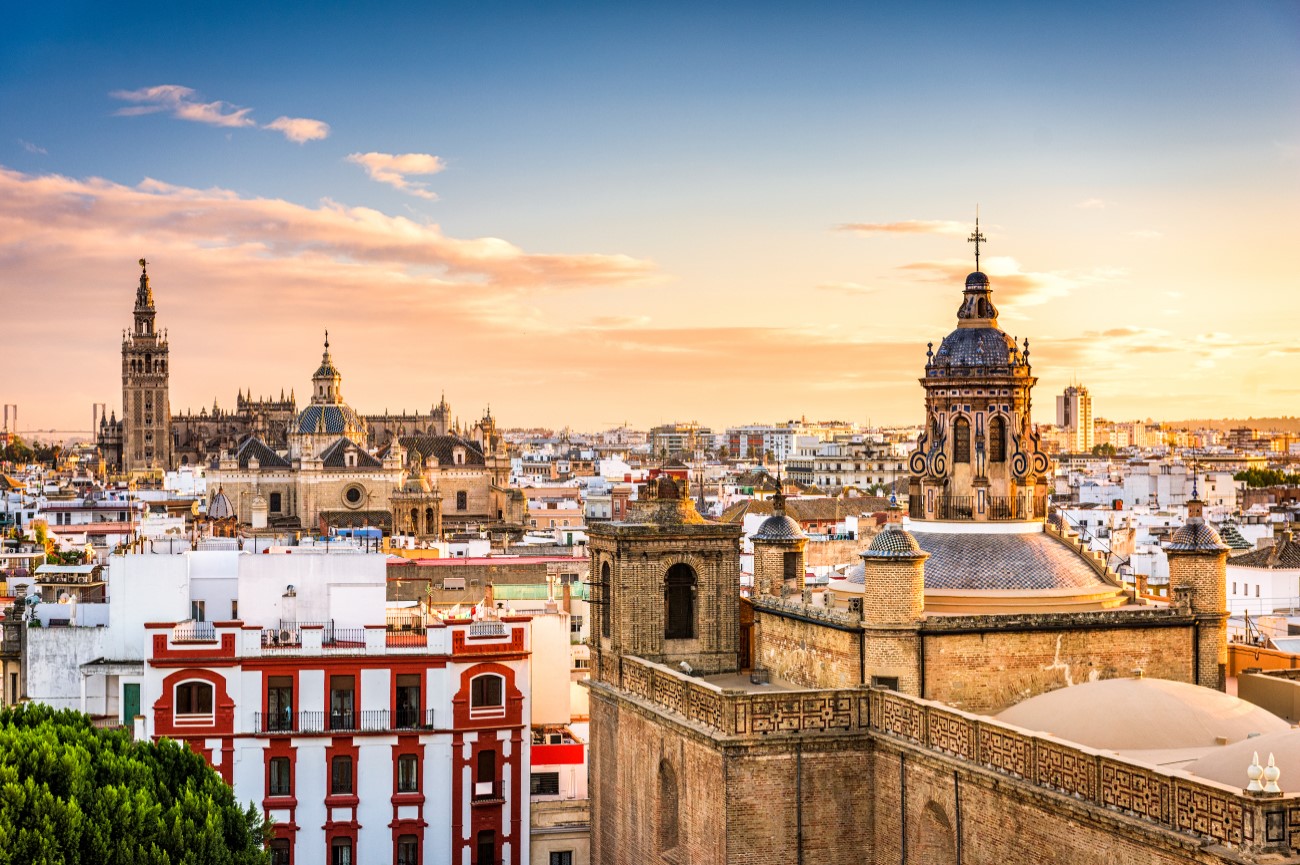 What to do when Visiting Seville

When visiting this city rich with culture and history, here are some of the best things to see and do:

Seville’s cathedral, the Catedral de Sevilla or Cathedral of Saint Mary of the See, is truly stunning. Located along the Plaza del Triunfo in Barrio Santa Cruz, it is the largest Gothic cathedral in the world and since 1987 has been designated as a UNESCO World Heritage Site.

With 80 different chapels, you could spend hours admiring and exploring the stunning modern architecture. 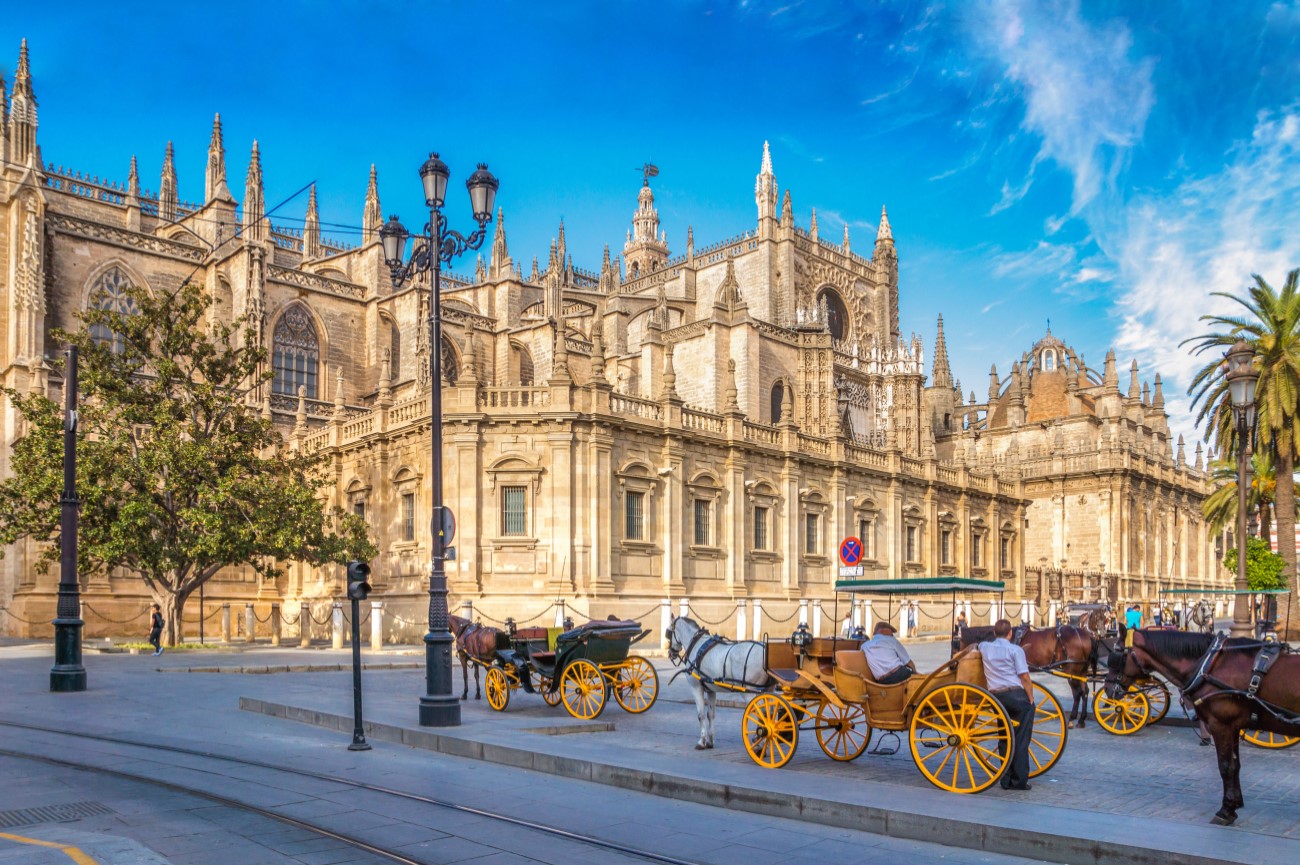 Seville’s cathedral, the Catedral de Sevilla or Cathedral of Saint Mary of the See, Spain

The site of the cathedral was home to a mosque completed in 1198 and “Christianized” after the conquest of Seville in 1248 to take on many of the features you can see today. The mosque’s courtyard was maintained and its minaret has become the cathedral’s best-known feature, the Giralda bell tower.

La Giralda doesn’t have a staircase inside but 34 ramps. This was so the Muezzin could ride his horse to the top when making the call to prayer. On your way up, stop and visit the archeological exhibits. Once at the top, you will get a view that is more than worth the price of admission.

The cathedral houses the remains of Christopher Columbus and his son as well as Seville’s conqueror Ferdinand III. 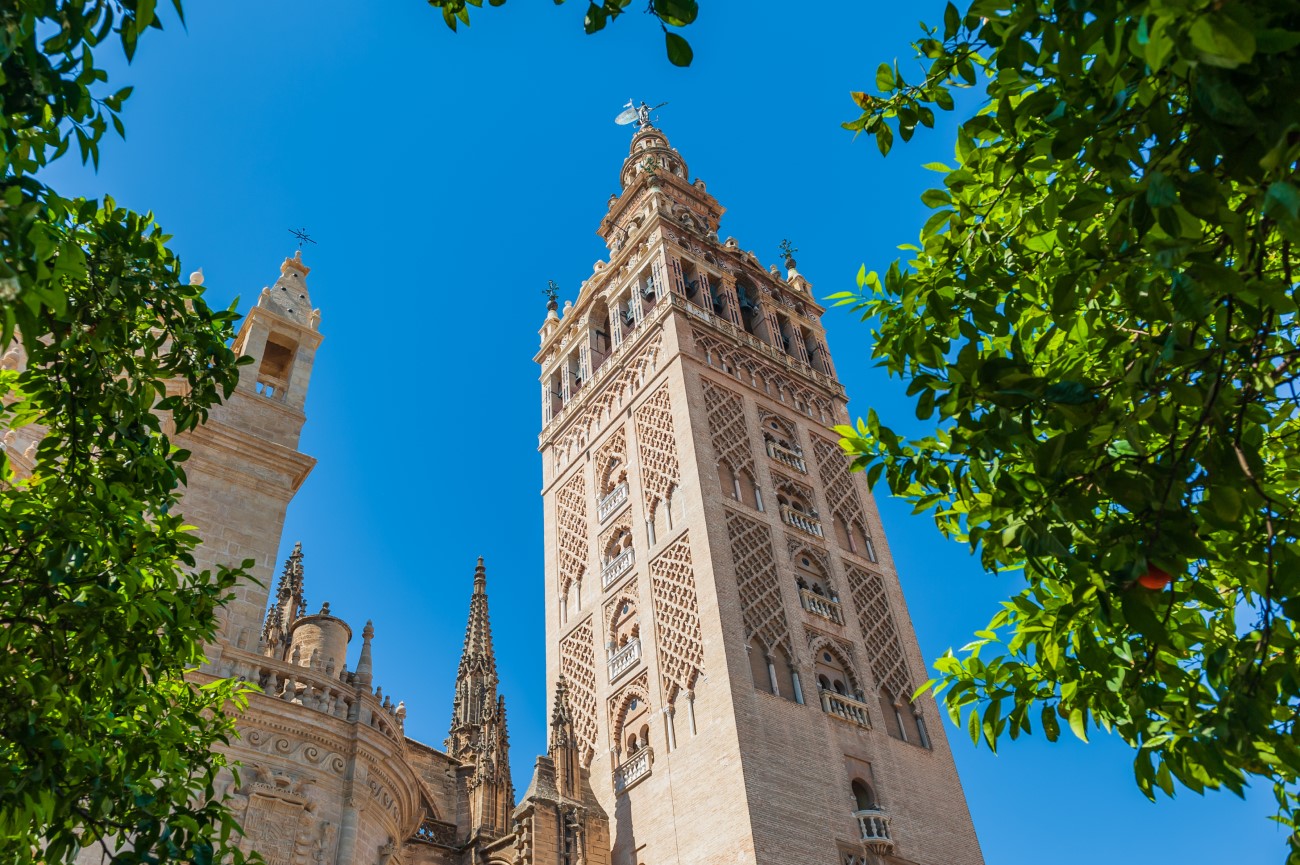 It would be impossible to wander Barrio de Santa Cruz and visit the Plaza del Triunfo without also paying a visit to Real Alcazar. This magnificent royal palace was built on the site of a fortification dating back to 913. It is still used by the royal family today, making it one of Europe’s oldest palaces still in use!

Over the centuries since, the palace has been remade and remodeled a number of times with the largest change taking place in the 14th century under King Pedro. He is responsible for the construction of the Palacio de Don Pedro, one of the palace’s most spectacular buildings.

Inside there are many wonderful sites to see and explore. You will enter through the Puerta del Leon (Lion Gate) and emerge on the Patio del Leon (Lion Patio) a popular hang out for king Alfonso XI and his mistress Leonor de Guzman. 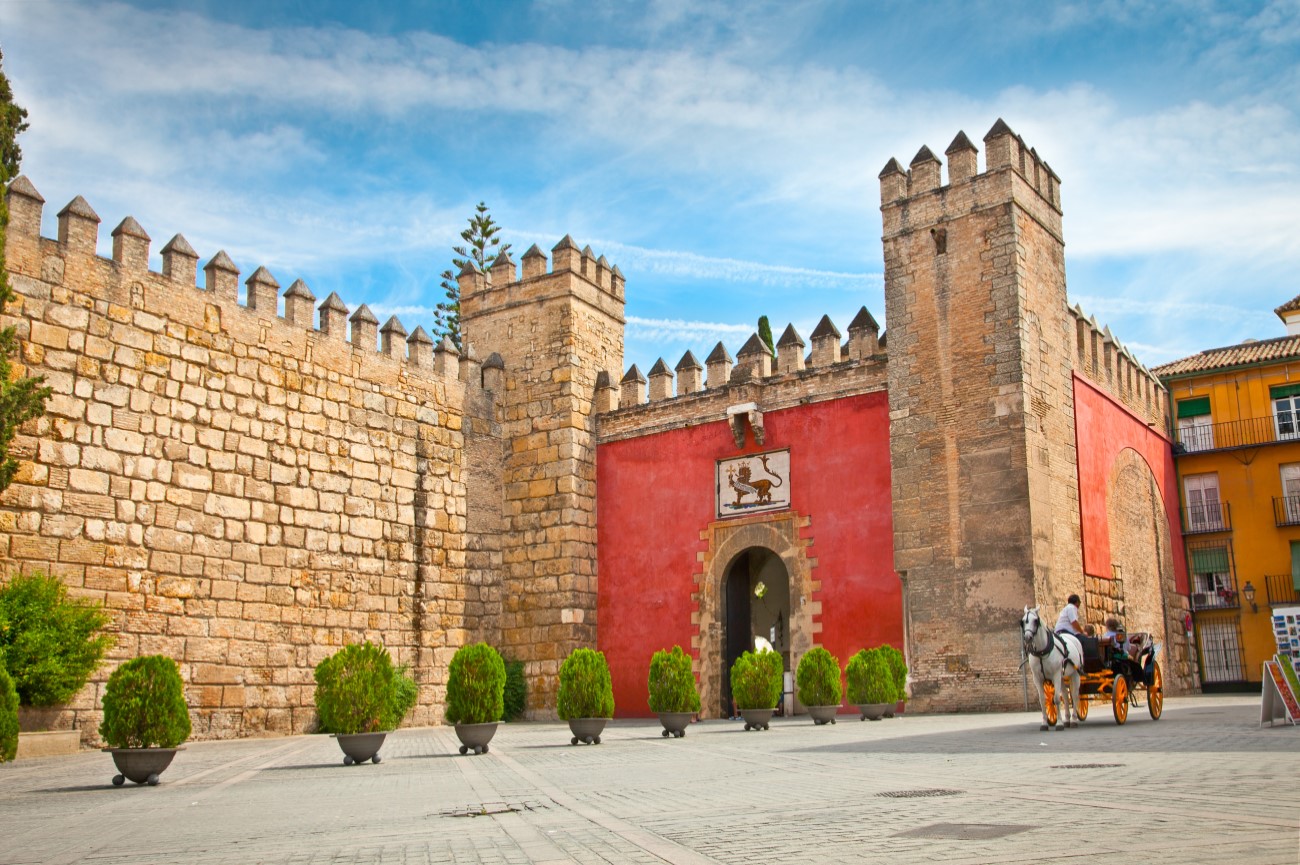 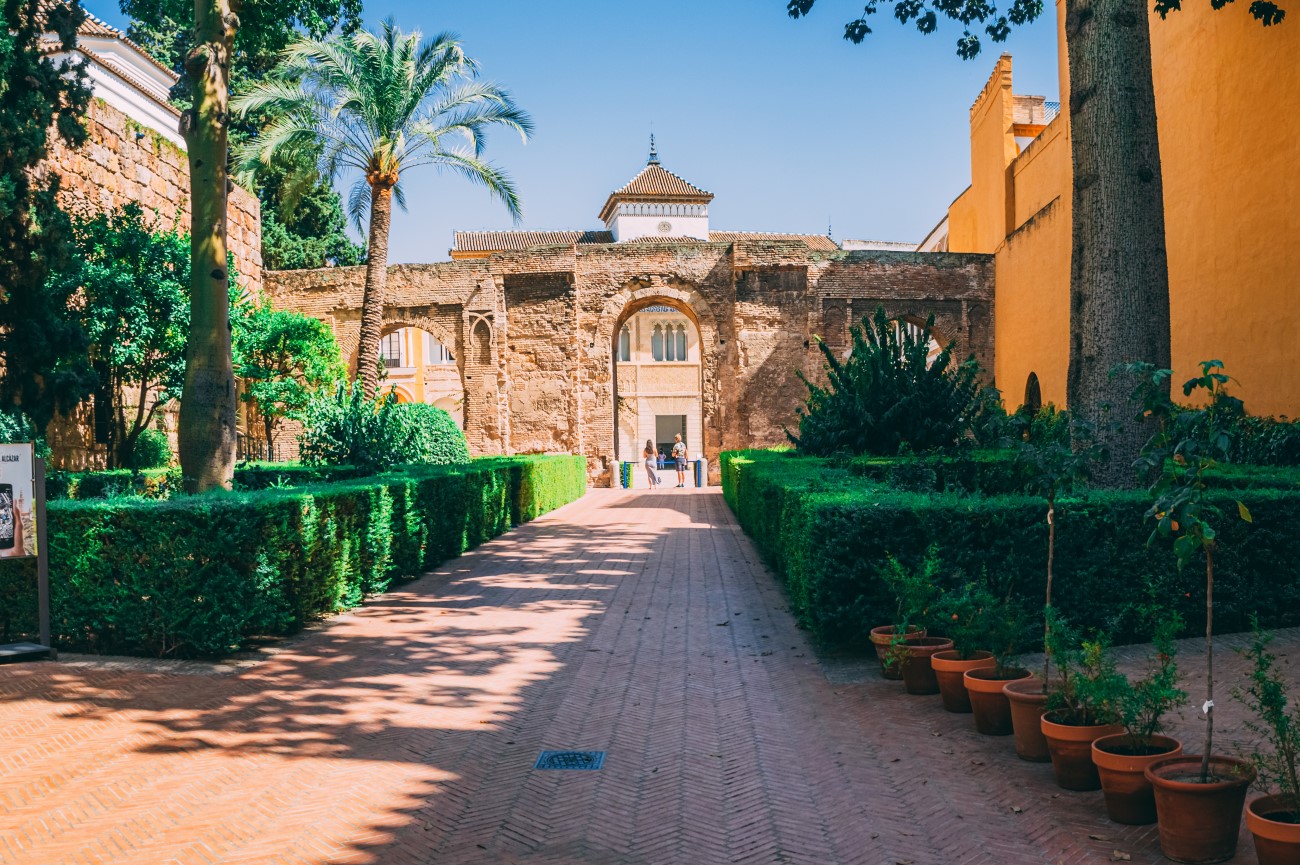 At the center of the palace complex is the Patio de las Doncellas (Patio of the Maidens). The courtyard contains a long reflecting pool and sunken gardens on either side. The gardens were discovered in 2004 below a marble cover that dates to the 16th century. 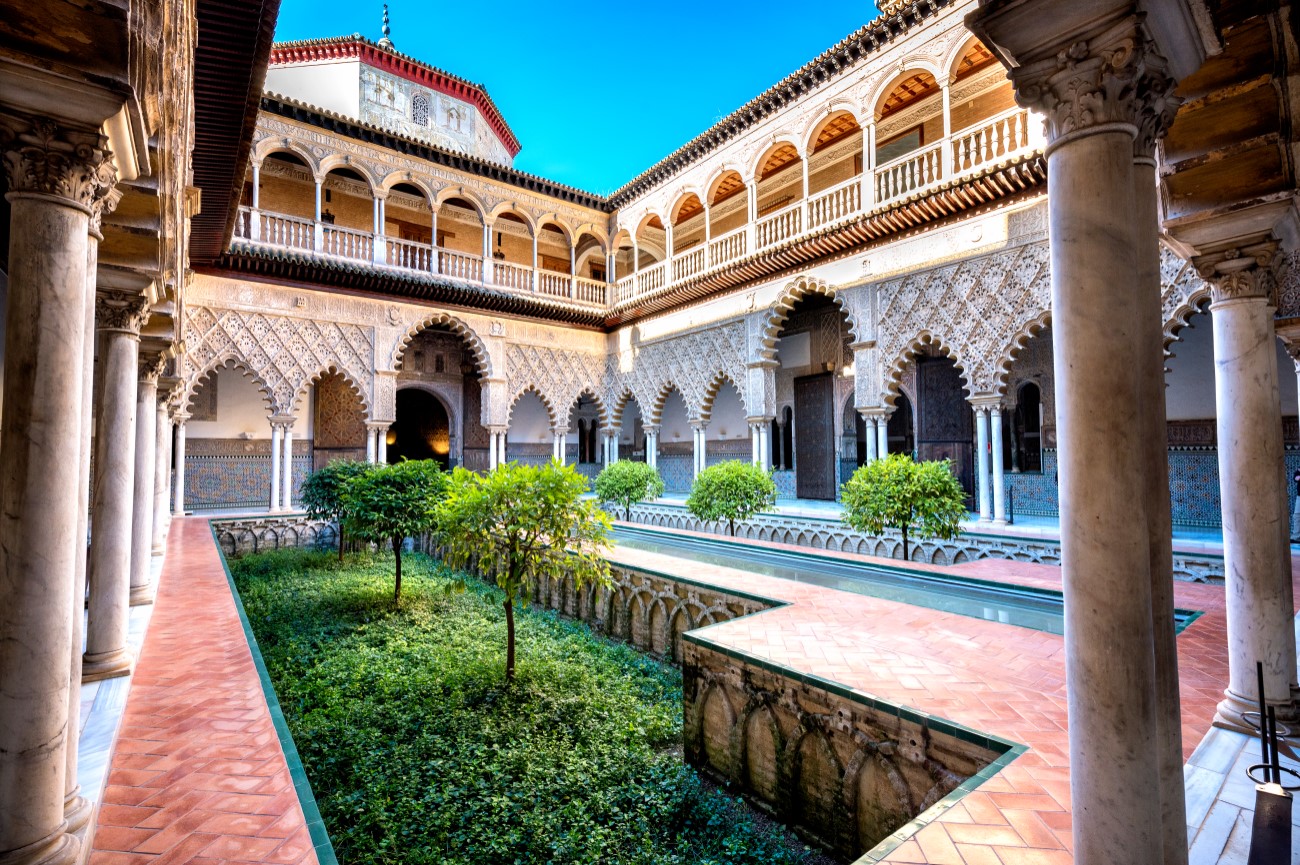 The Patio de las Munecas (Patio of the Dolls) has incredible plasterwork and the Salon de Embajadores (Hall of Ambassadors) is marked by its high wooden, star-patterned dome. 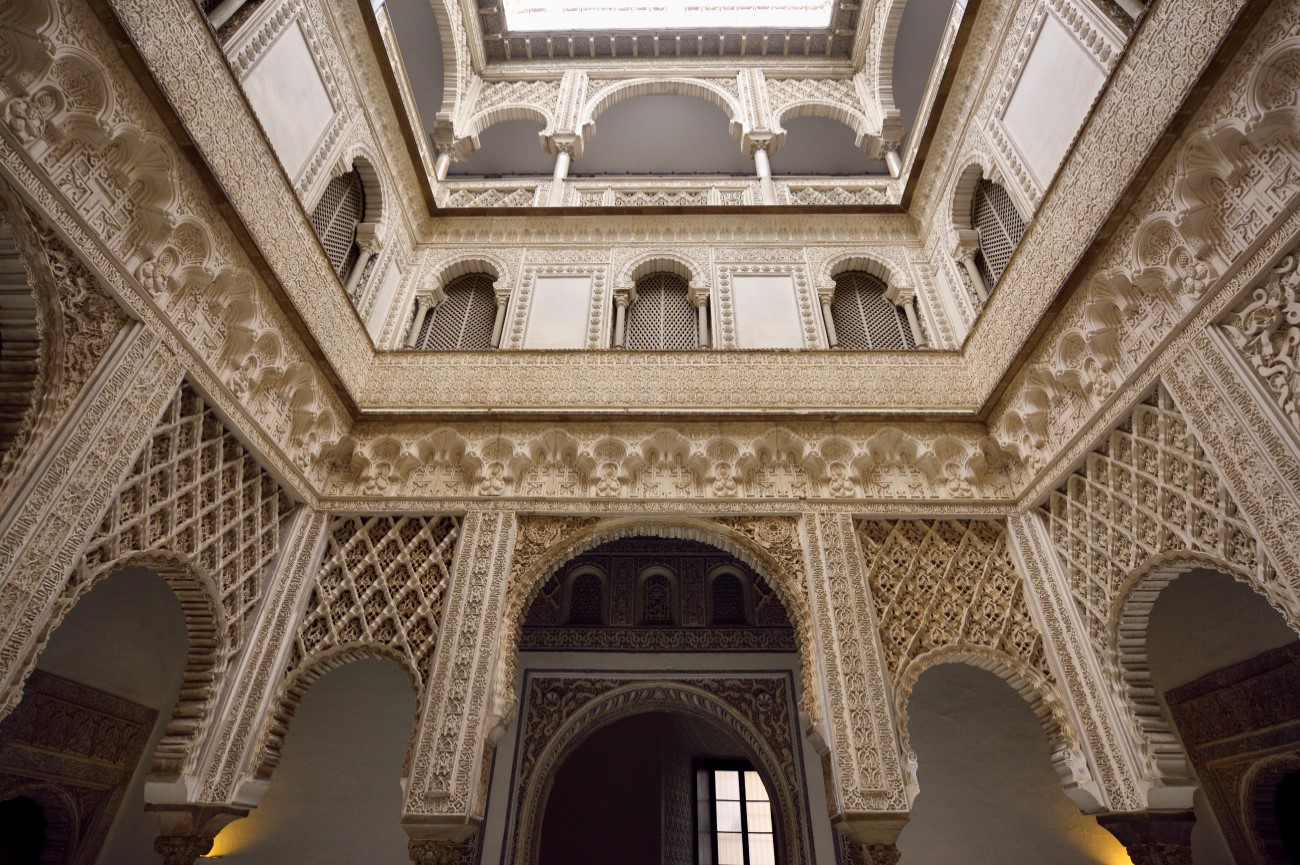 Ornate plasterwork in Courtyard of the Dolls at the Royal Palace Alcazar in Seville, Andalusia, Spain 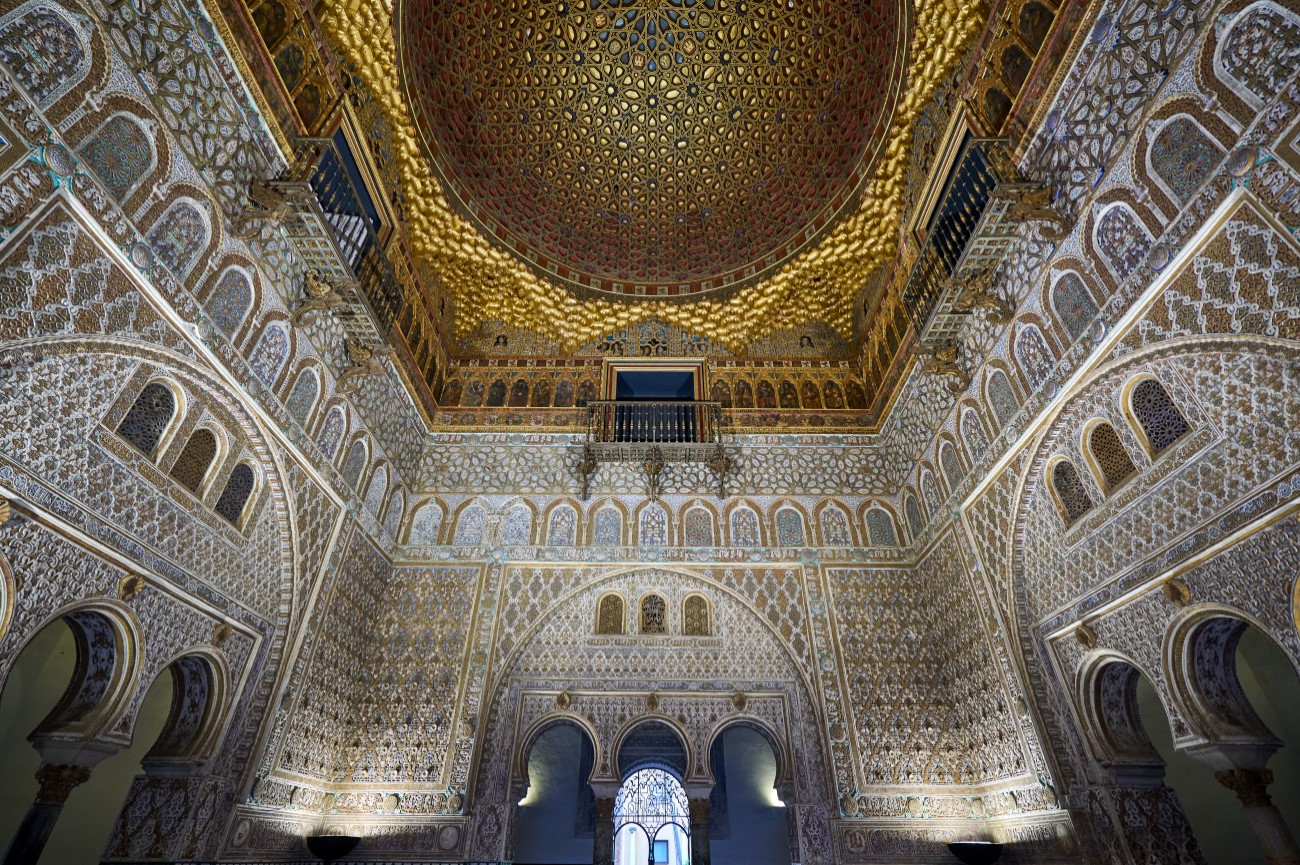 Tours are the private residence are available at specific times so if you are curious about the current royal quarters, this is for you!

Because there is so much to see and so much history associated with Real Alcazar, consider booking a guided tour. It is the only way to truly discover all the palace’s secrets!

This is a very popular tourist destination and long lines are to be expected. You can cut down on some of your wait time by booking your tickets in advance.

If you want an escape from the bustling city center, pay a visit to Parque de Maria Luisa. This 34-acre park is full of lush trees, manicured gardens, and duck ponds. Donated to the city of Seville in the late 19th century, the grounds were developed in advance of the Ibero-American Exposition in 1929.

One of the things to see inside the park is the Plaza de Espana. This plaza and the accompanying building are pretty incredible. The building displays beautiful brick and tile work while the grounds are full of fountains, canals, and tiled scenes depicting important moments in Spanish history. If you are bored with walking, rent a rowboat, and get out on the canals to explore the park from a different perspective (if you want more water-based activities, consider taking a kayak tour of the Guadalquivir River). 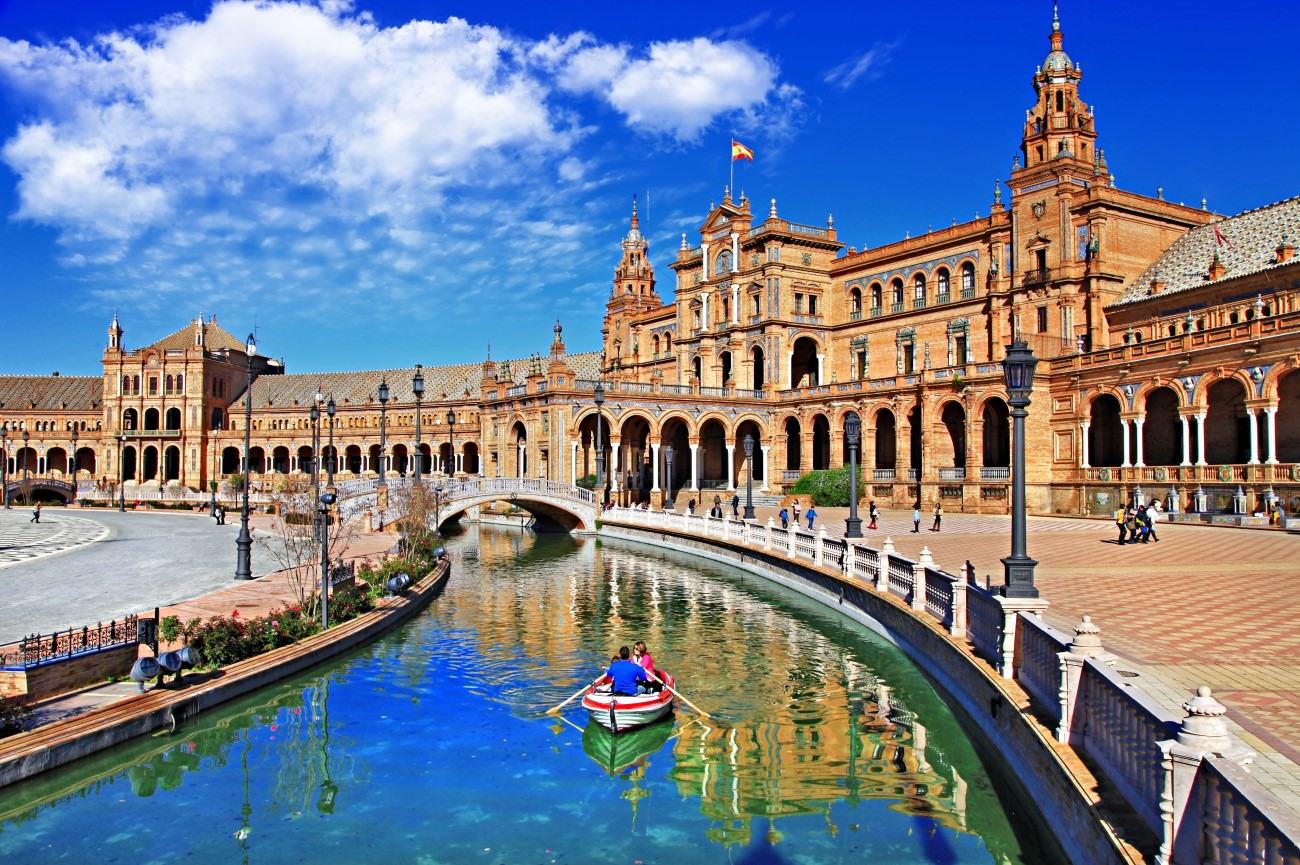 At the south end of the park is the Museo Arqueologico that contains several Roman statues and sculptures and the Museo de Artes y Costumbres Populares where you can explore local customs, costumes, and traditions. 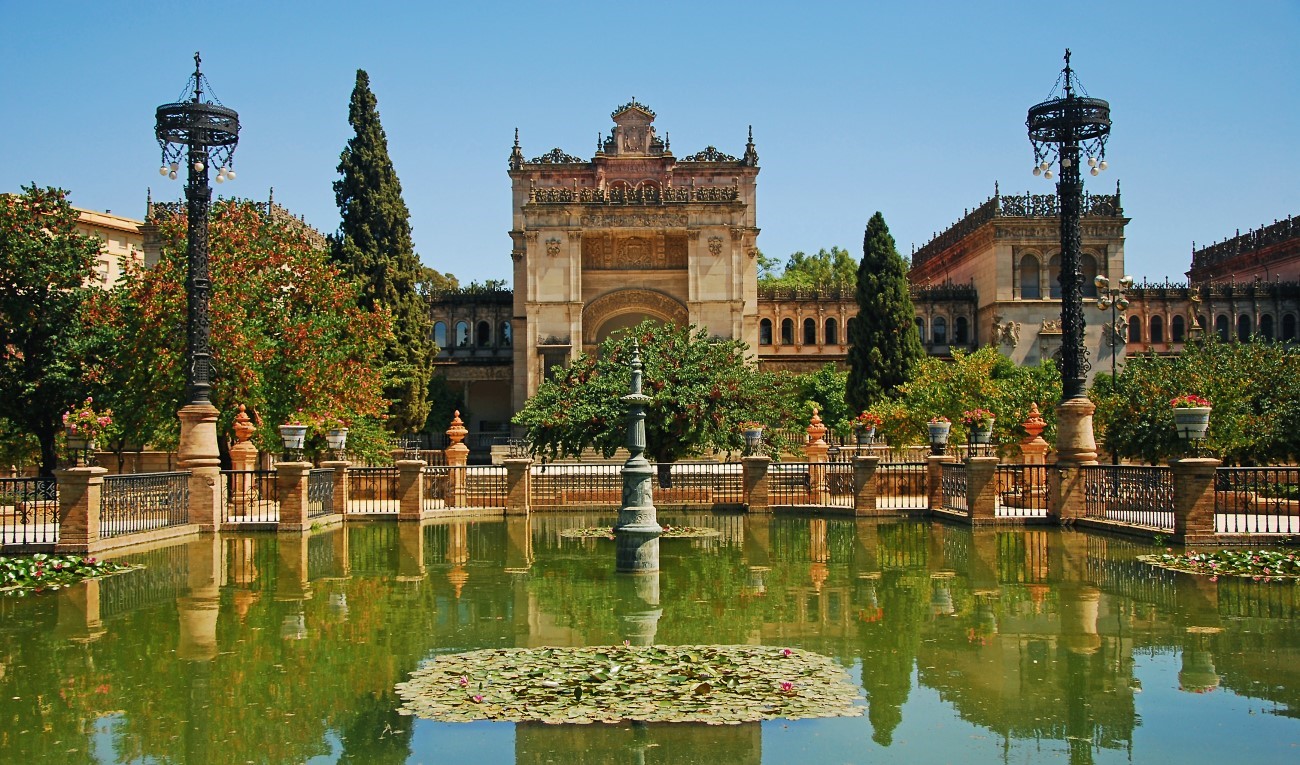 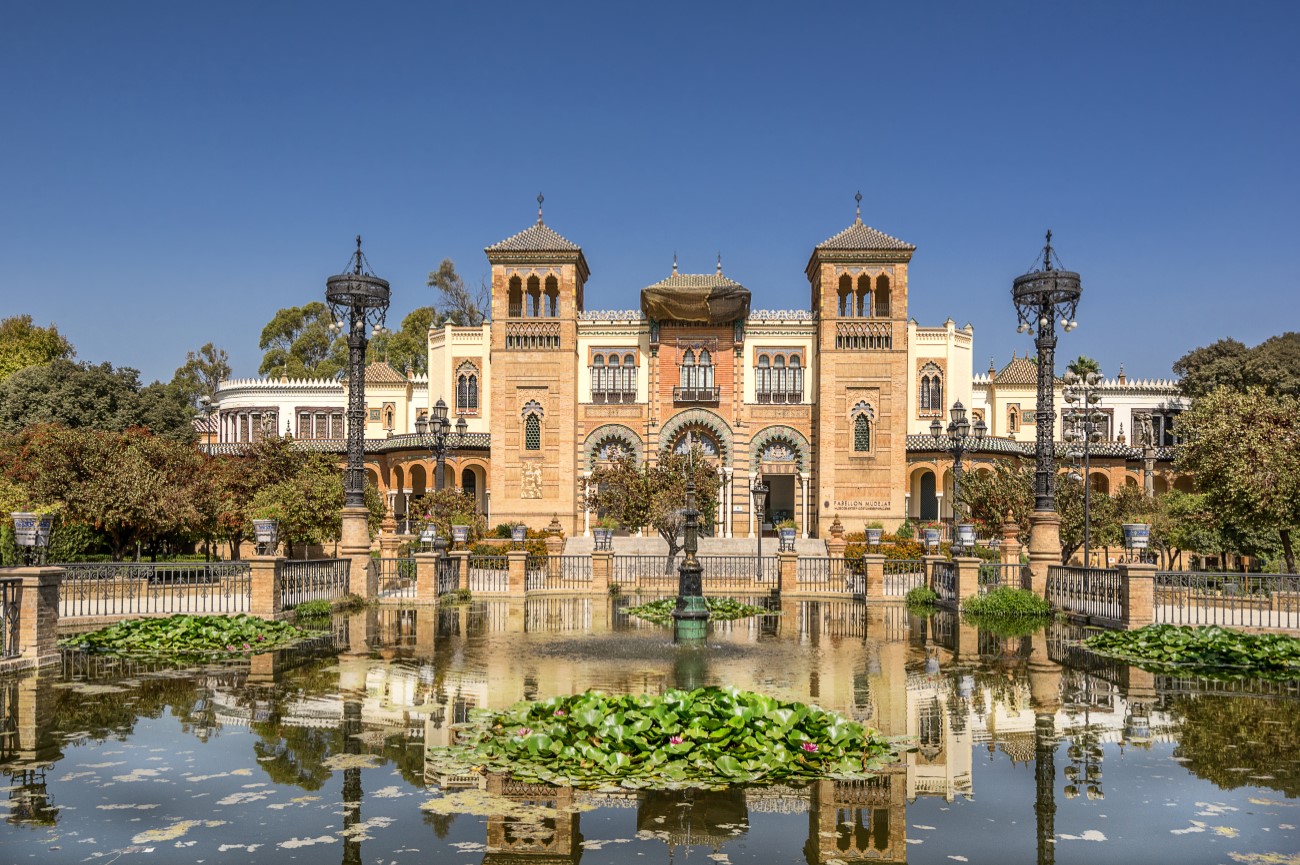 The building has a brightly colored Baroque exterior and inside you can take a guided tour of the 13,000 capacity arena or pay a visit to the Museo Taurino, or bullfighting museum to learn about the history of the sport.

While the sport is controversial, it is possible to view the inside of the arena when there are no scheduled fights. If you did want to take in a bullfight during the Feria de Abril in the spring (just after Easter) and typically every Sunday until September. 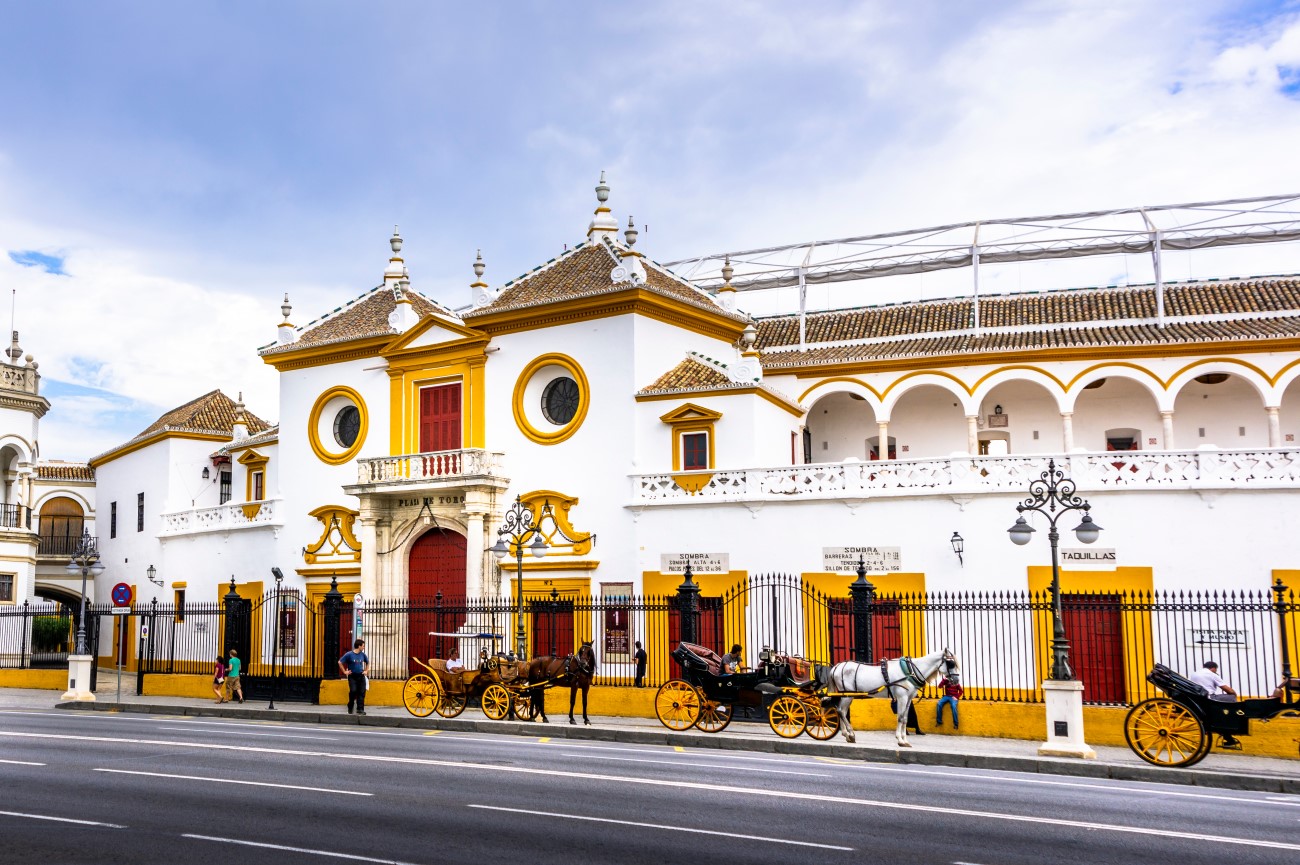 If you want a good time, head to the Alameda de Hercules.

The park itself is a popular hangout spot for families, students, and tourists. Alameda de Hercules is lined with trees and surrounded by incredible restaurants, bars, and clubs. Offering an alternative and boho vibe, it is the center of Seville’s gay scene and its thriving music scene.

At the southern end of this pedestrian area are to 30-foot tall columns. These are original works and are over 2000 years old. On top of these columns are images of Hercules and Julius Caesar.

The plaza was constructed in the 16th century in Calle Mármoles, in the Seville city center and later moved to its current location. At the original site, you can still see two of the plaza’s columns. These columns are shorter than the ones in Alameda de Hercules today as they are partially below the current street level giving you a glimpse into how much Seville has changed!

Once you are done exploring the square, be sure to visit the bars and restaurants nearby. It is likely that you will have to wait for a table at most locations but trust us when we say that the wait will be well worth it. You find a wide range of glorious tapas, incredible wines, and great entertainment! 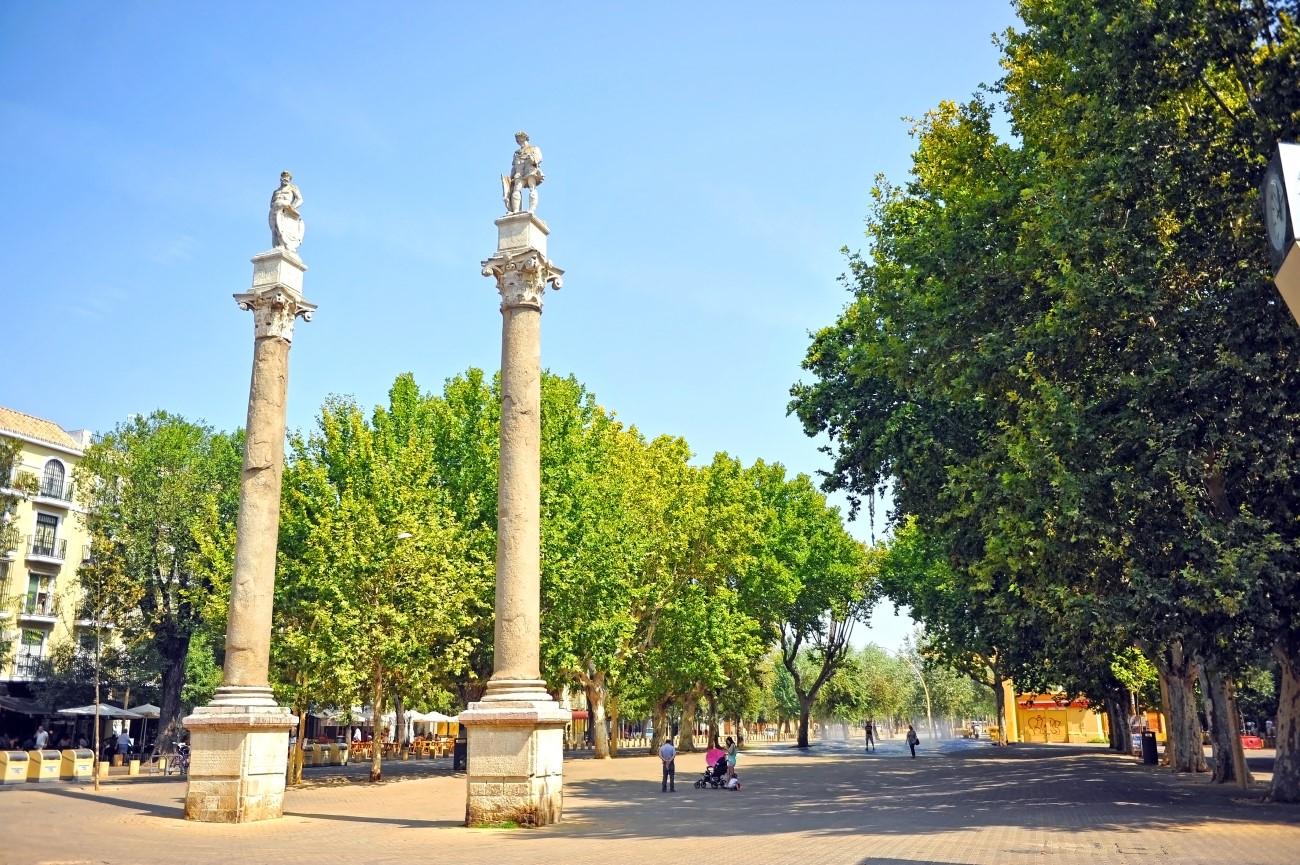 Take a break from seeing the city sites and pay a visit to Isla Magica. This theme park was constructed on the grounds of the Expo ‘92 World’s Fair and opened for visitors in 1997.

There are some water attractions like a large lake, a splash ride, a log flume, and a river rapids ride. This is also the site of Spain’s first inverted roller coaster.

And forget 3D, step into the future with a 4D cinema experience!

This park is, as the slogan says, “fun without limits.” 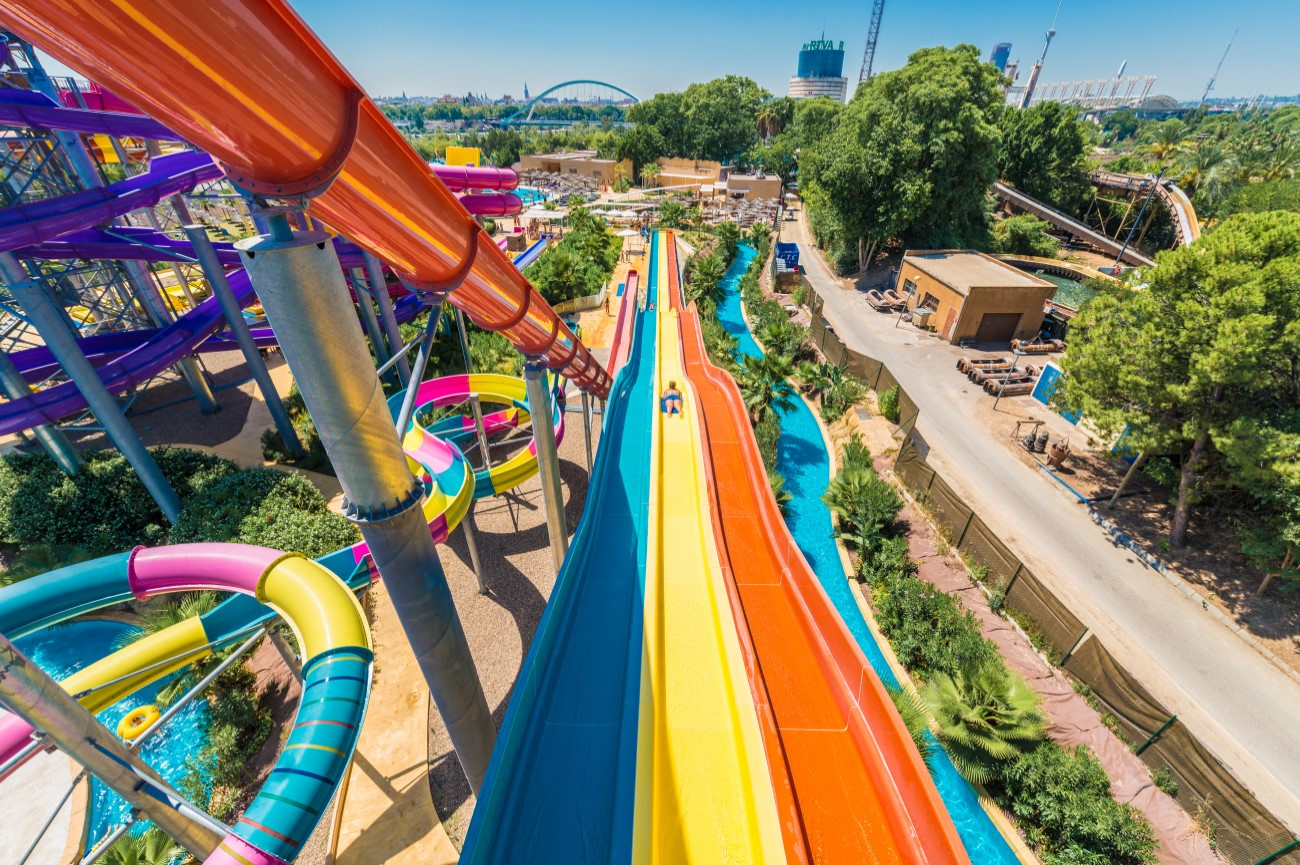 Built in the renaissance style with Moorish and gothic influences, this 15th century palace belongs to the House of Alba and was the favorite home of the Duchess of Alba, Spain’s richest aristocrat, before her death in 2014.

Now, it is one of the most visited sites in Seville.

There is an arcaded courtyard and lovely gardens to explore. Inside, you can see many tapestries and paintings and peruse the Duchess’ private collection of Semana Santa works, as well as her bullfighting and football memorabilia.

The palace contains 1,425 artifacts that are protected from sale meaning they will remain a part of the history and culture associated with the building. One curious piece is a watercolor done by First Lady of the United States, Jackie Kennedy. She completed the work while visiting the palace in 1960. 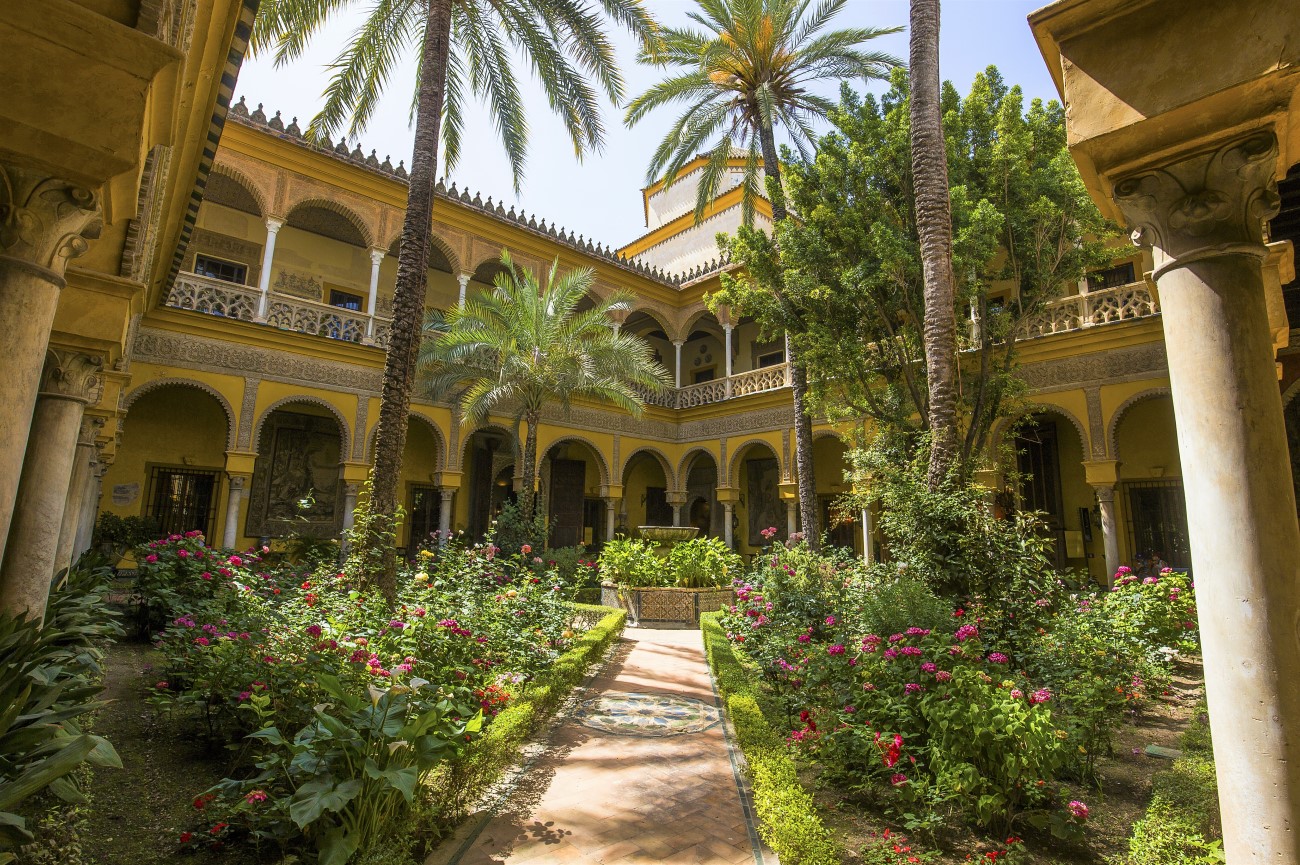 Casa de Pilatos is a studding display of traditional Sevillian architecture. Constructed in the late 15th century, it is currently occupied by the ducal Medinaceli family and remains one of the largest private residences in Spain.

Inside, you will see a blend of Mudejar, Gothic, and Renaissance styles with lots of tilework and artesonados. Artesonados are ceilings with interlaced beams and decorative inserts which creates an effect similar to what you will see at the Real Alcazar.

The stairs to the upper level are adorned with incredible tile work and a golden-domed ceiling. To visit the upper floors you need to book a guided tour as this is an occupied dwelling. Some of the works inside include a bullfighting themed Goya painting and Medinaceli portraits that span centuries. 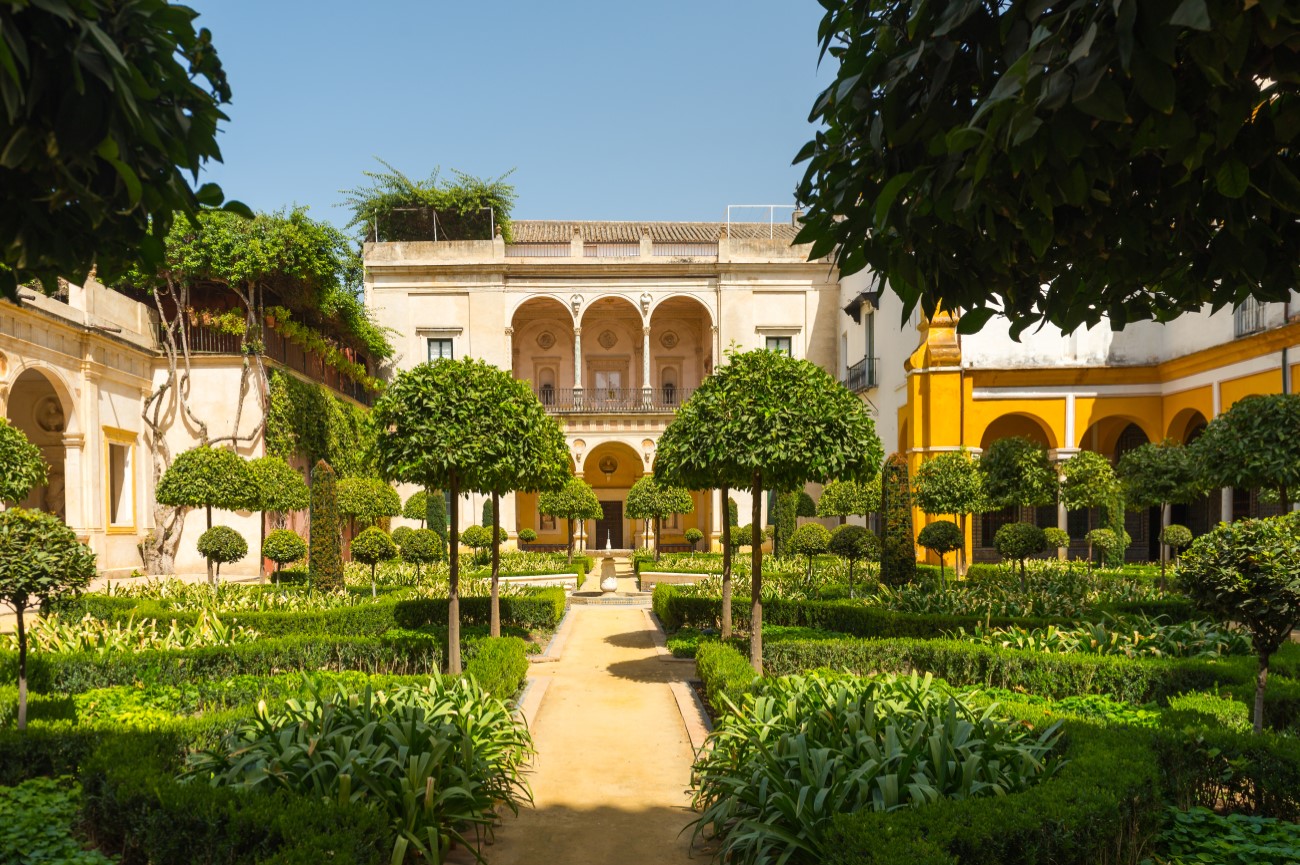 Across the Guadalquivir River, near the arched Triana Bridge is Plaza del Altozano where you will find Mercado de Triana or the Triana Market.

This traditional market was recently renovated to make things more comfortable and accessible for both stall owners and shoppers. But, care was taken to maintain the historic feel of the place. In fact, in the lower level of the market, you can see the remains of the Castle of San Jorge, the former seat of the Spanish Inquisition.

Wander the market to get a sense of the various types of meat, cheeses, and produce that are native to the region. You are sure to find something tasty to snack on or some unique souvenir to take home.

Before you enter the market, make sure you stop in the Plaza del Altozano and take a picture of the popular statue of a flamenco dancer! 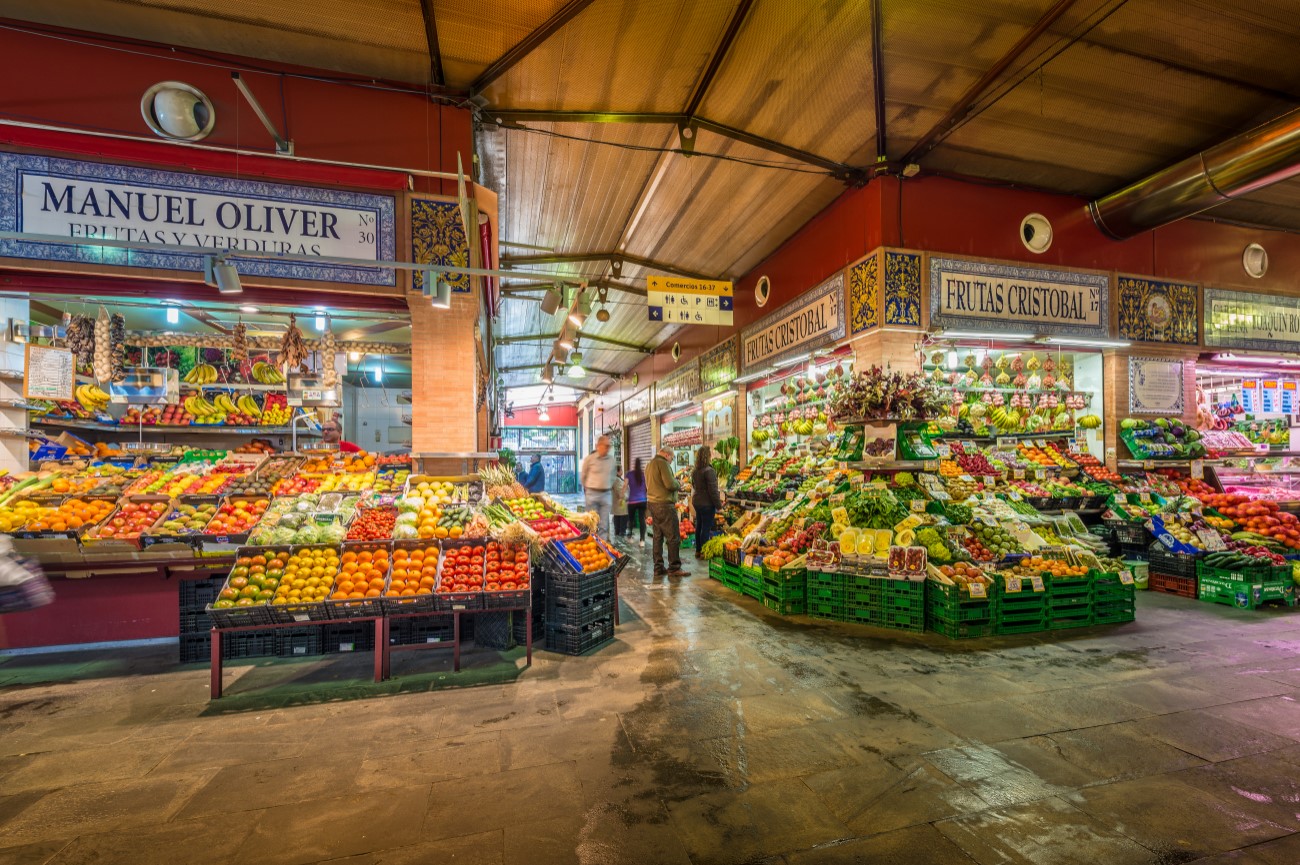 Wandering the narrow streets of historic central Seville you will come across the fine arts museum. Museo de Bellas Artes de Sevilla is housed in a former palace and is one of the top museums in the country.

It contains a collection of Spanish and Sevillan sculptures and paintings that date from the 15th-20th centuries. The museum, however, places a special emphasis on works from Seville’s golden age in the 17th century.

Be sure to stop into the former chapel to see works from Seville’s baroque masters, including a masterpiece by Bartolome Esteban Murillo found at the head of the chapel. 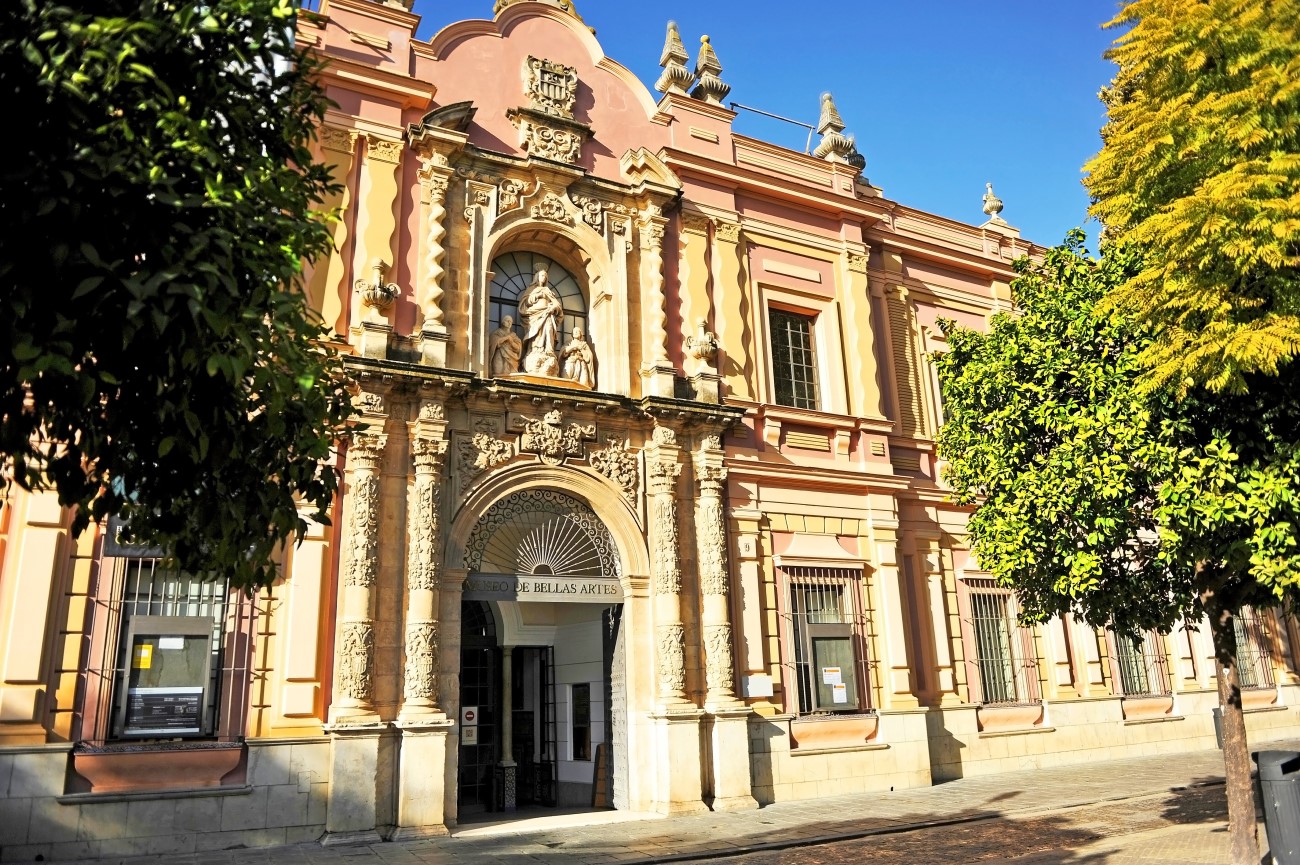 Far from a traditional museum, Museo del Baile Flamenco is a full immersion into the art of flamenco.

You can learn about the history of flamenco dance, music, and guitar before taking a flamenco show! By day, enjoy the interactive displays, traditional dress displays, and works of art that depict flamenco. In the evening catch flamenco dancers in action in an outdoor courtyard show or a more intimate basement show.

If you will be in Seville for a longer stay, you can arrange flamenco lessons and learn from the masters! 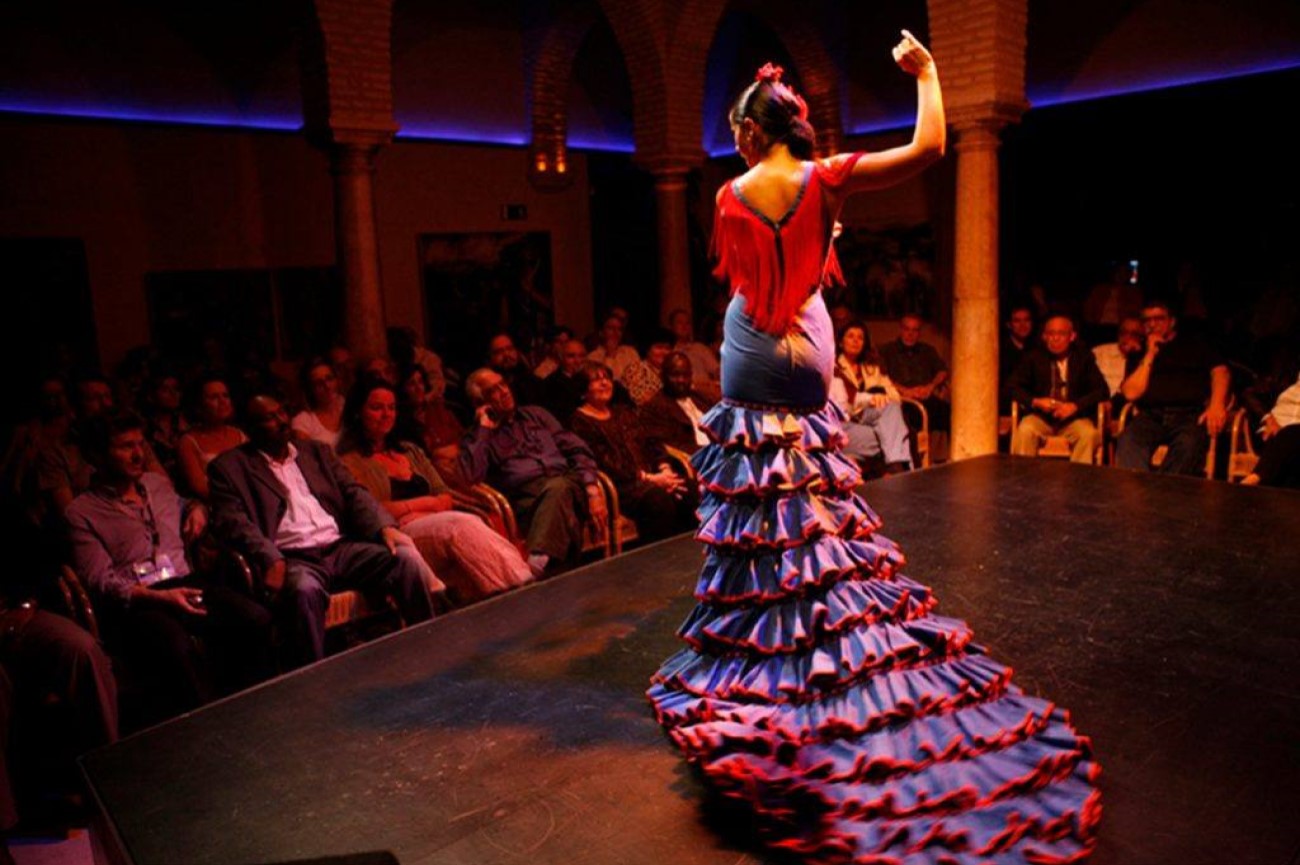 Seville is a bustling historic city with many enjoyable sites, sounds, and flavors. If you are interested in visiting, you can explore Seville with one of our tour packages. Depending on your interests, you might enjoy the Real Discovery & Historic Journey in Seville and Granada package or the Spanish Tapas, Sherry & Culture Discovery in Seville package. If you would rather create your own adventure, we are here to help. Use our expertise to create a bespoke holiday package you will never forget. Contact us today to book or get started!