12 Best Things to See and Do In Valencia

Valencia is a charming and vibrant city that proudly displays Spain’s thriving culture and history. If you are looking for a quiet, sleepy getaway, this is not it.

From the beaches to the churches, the market to the science museum, Valencia will keep you on your toes.

To help you make the most of your visit, we’ve put together this list of the 12 best things to see and do in Valencia Spain: 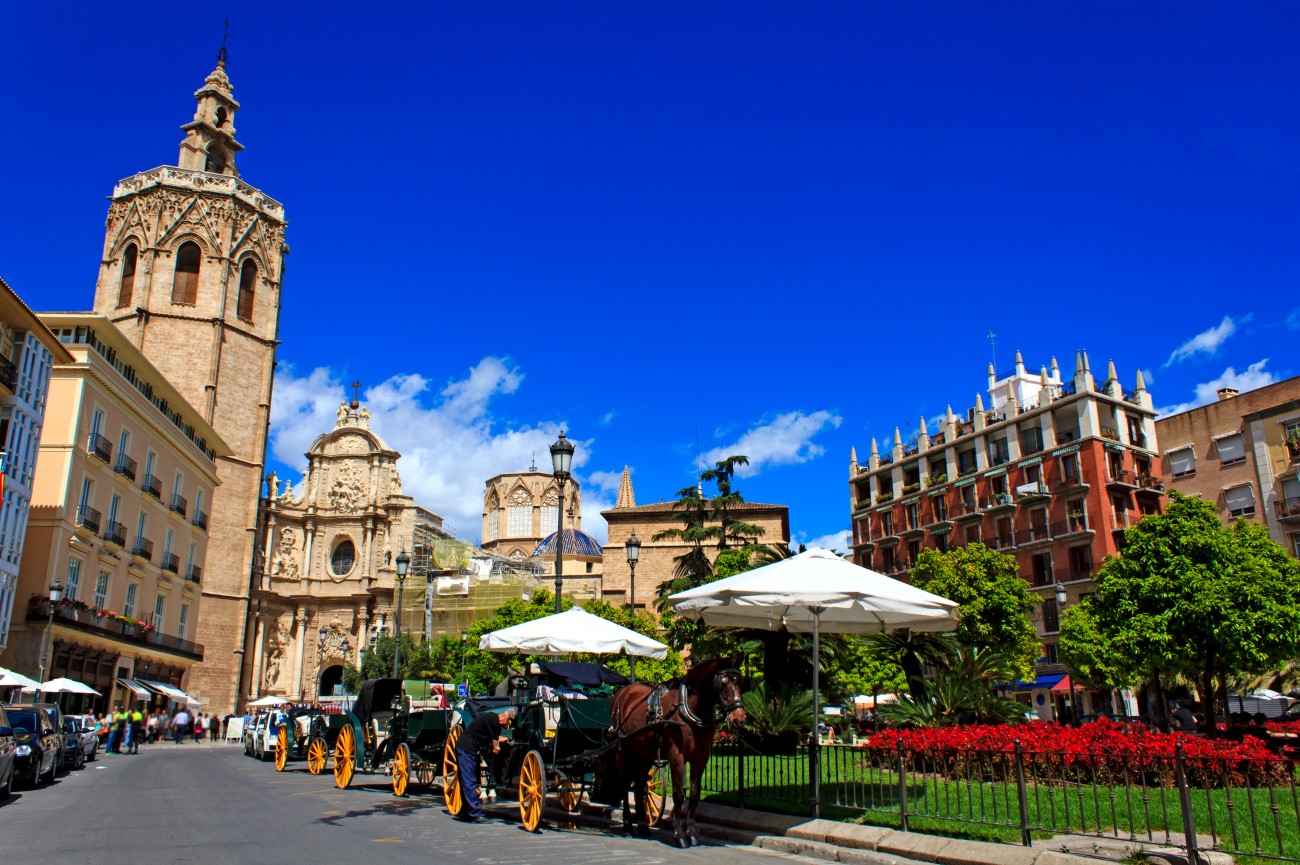 Playa de la Malvarrosa, or Malvarrosa Beach, is conveniently located within walking distance of the old town. This a blue flag beach that runs for a kilometer along the city’s coastline. The band of golden sand is soft, clean, and accessible. Malvarrosa also has a number of amenities that will make your day at the beach absolutely perfect, including, lifeguards, drinking fountains, showers, and several places to grab some food or a drink along the promenade that runs alongside it.

If you find this beach too crowded, walk towards the marina to Playa de las Arenas or head about 11km from the city center, south of the harbor, to El Saler. This beach is backed by sand dunes and pine trees and tends to be a little more peaceful. 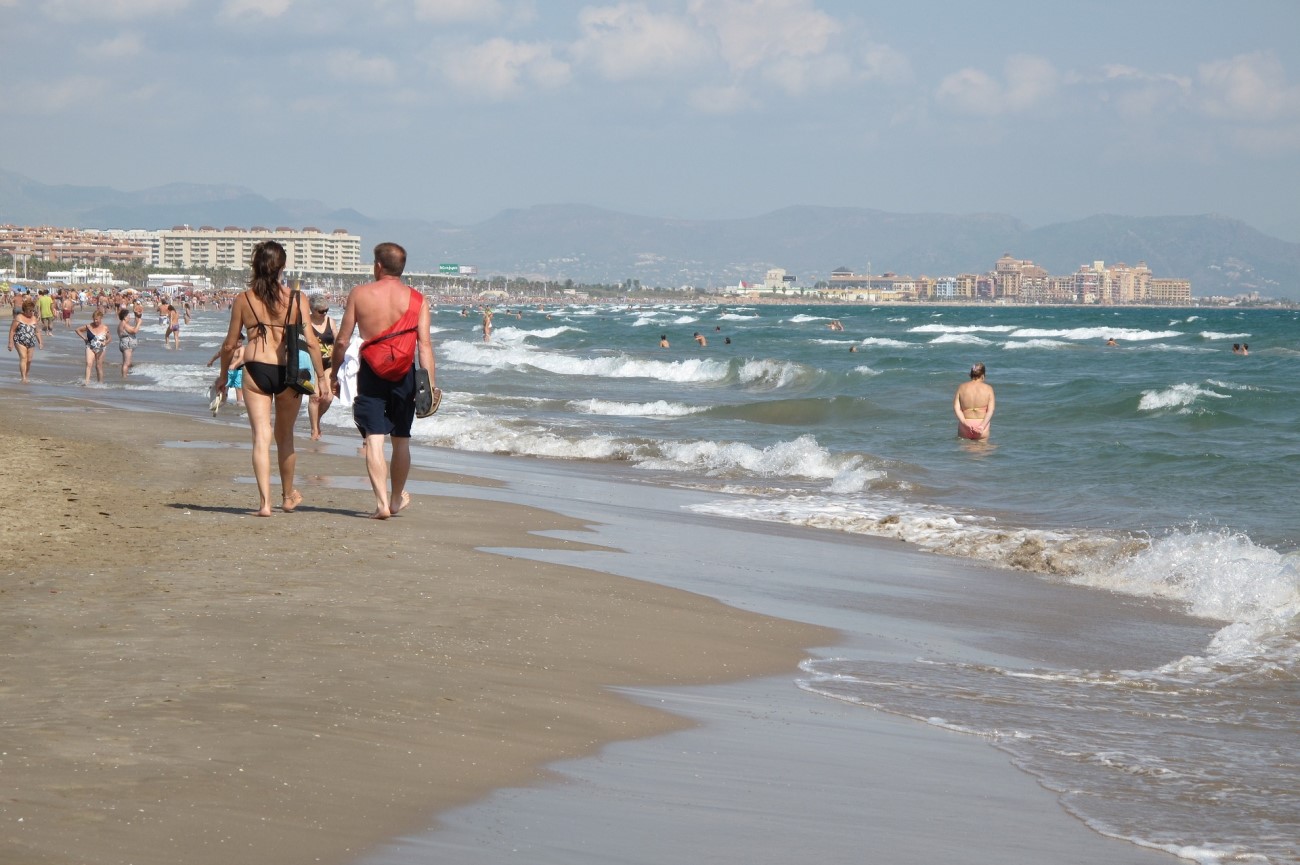 The Ciudad de las Artes y las Ciencias, the City of Arts and Sciences is a curious tourist attraction. If you want to explore your architectural curiosity and learn while you’re at it, this is where you need to be.

Inside the collection of stunning futuristic buildings, you will find an iMax theatre and interactive displays that will keep you occupied for hours. Be sure to book your tickets in advance to make sure you aren’t wasting time stuck waiting in a long line! 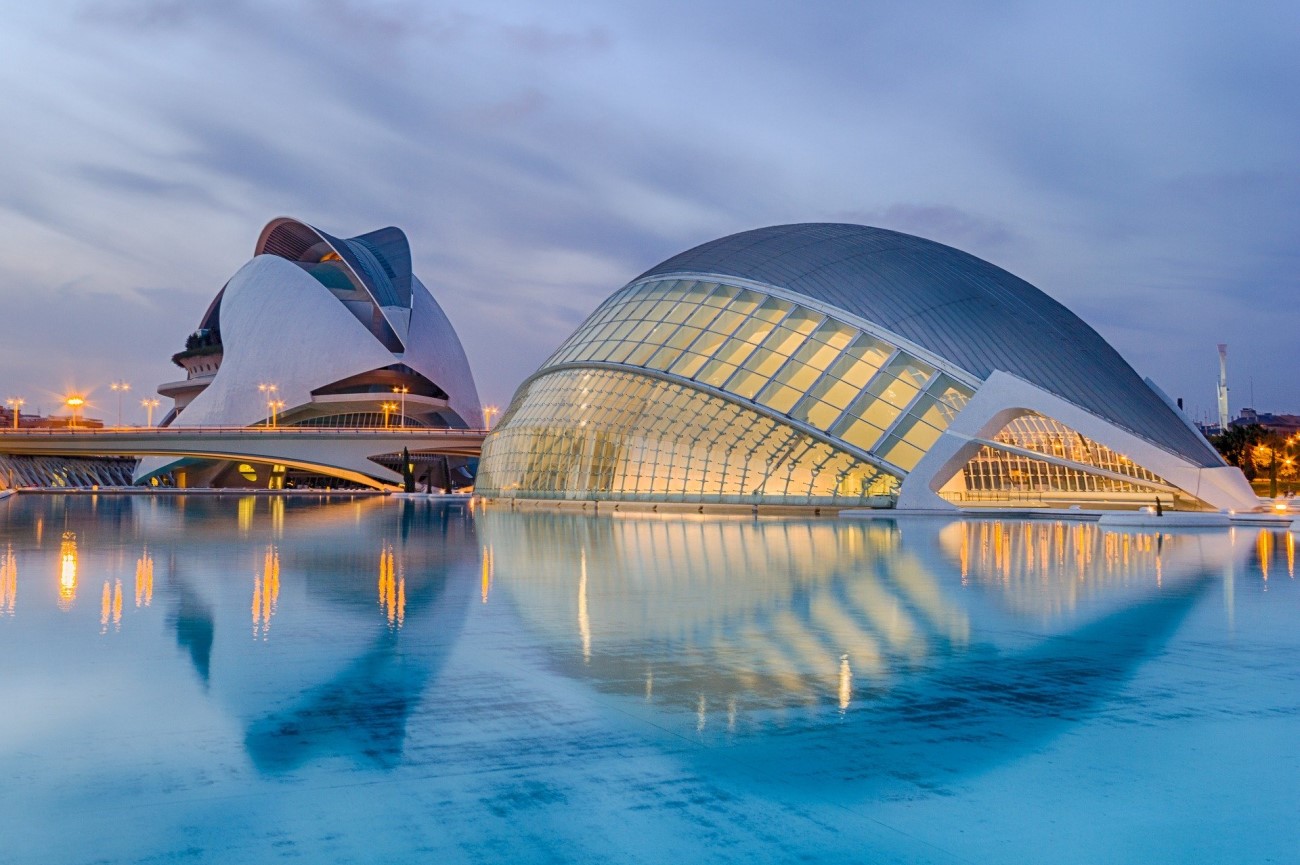 Oceanografic is part of the City of Arts and Sciences but it is an attraction onto itself and admission can be purchased separately.

Oceanografic is Europe’s largest aquarium with over 45,000 creatures and 500 different species. The exhibits are divided up into 10 different sections that include different underwater environments like the Arctic, temperate and tropical seas, the Mediterranean, and the Red Sea. Guests can travel through the environment by taking tunnels that go under the surface to provide a truly immersive experience.

Some of the sea creatures you can expect to see include dolphins, sea lions, walruses, tiger sharks, beluga whales, and penguins. 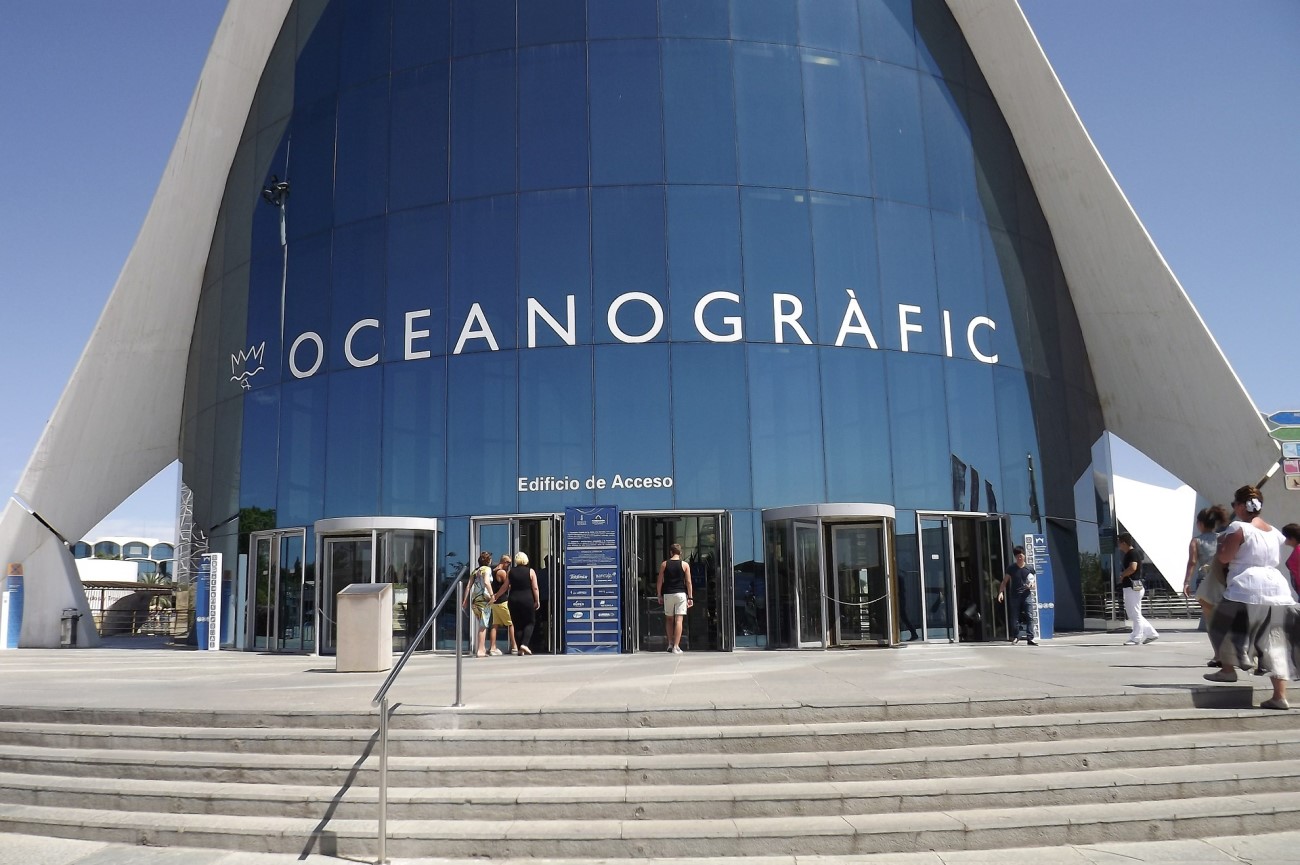 Oceanografic is part of the City of Arts and Sciences, Valencia, Spain

La Lonja de la Seda (also referred to as the Llotja de la Seda) is a UNESCO World Heritage site that dates back to the 15th Century. From 1482 and 1533, this magnificent Gothic building was the center of the silk trade. It is here that traders from all over the Mediterranean would travel to trade their wares.

In the sala de contratación, the building’s main hall, you can marvel at the large, twisting columns and the beautiful vaulted ceilings. 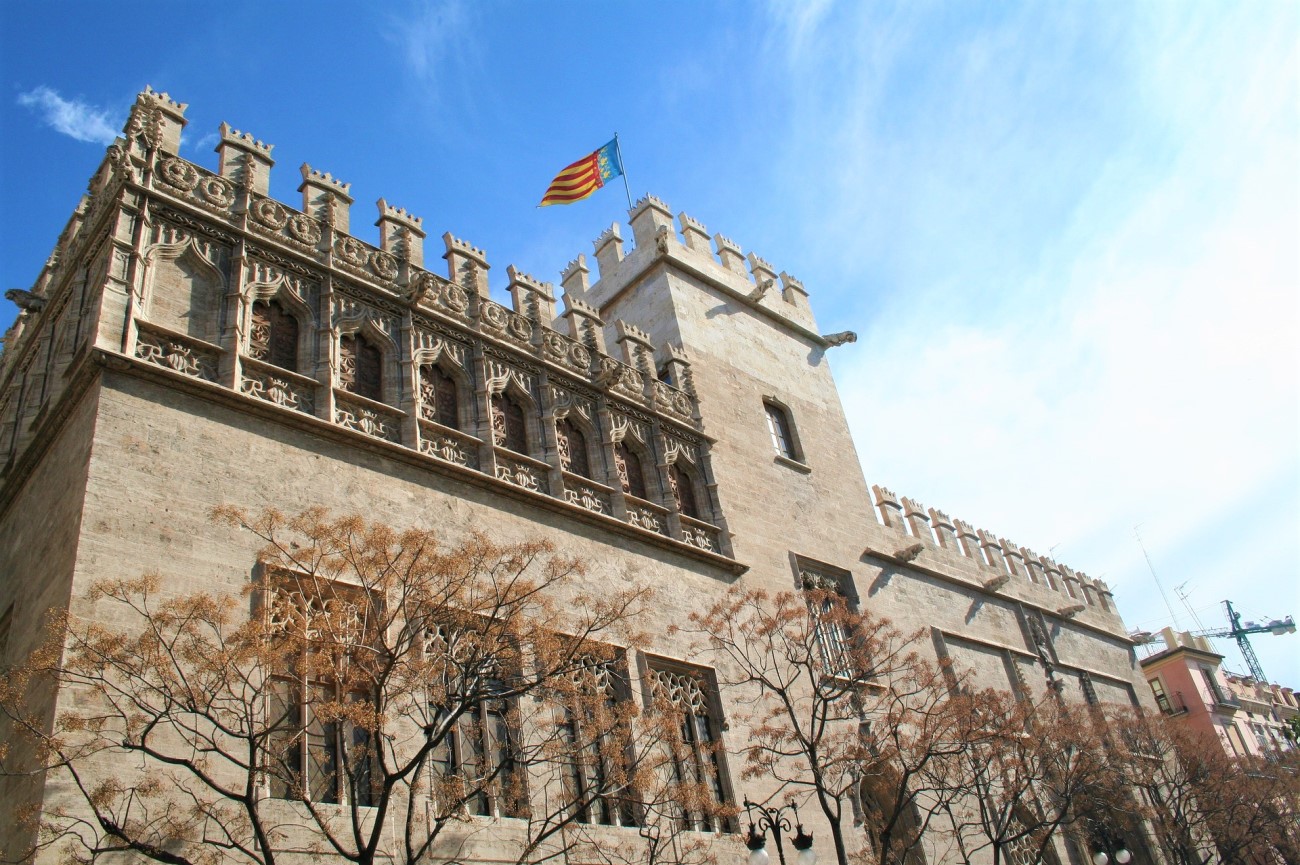 When finished at the Llotja de la Seda, take a walk across the street to the Mercat Central de Valencia (Mercado Central), or the central market.

The Central Market is a local landmark that stands as an example of Valencian art nouveau architecture. The colorful exterior is only made better by the wonderful treasures housed inside.

Get a glimpse of daily life in Valencia while exploring vendor stalls and trying Spanish delicacies like chorizo and manchego cheese. 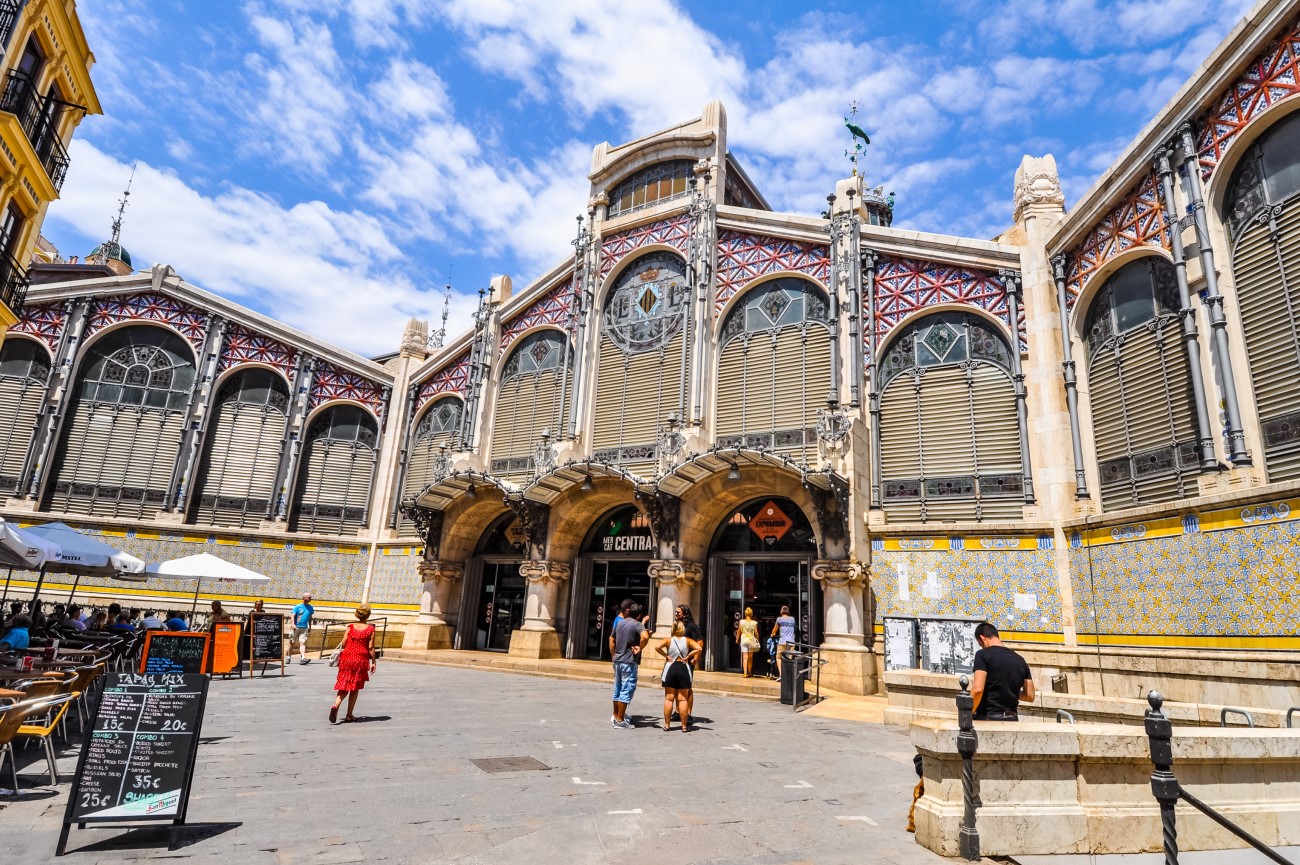 For a truly special experience, try to plan your trip to Valencia, Spain for the month of March.

Las Fallas, or the Fallas festival, marks the beginning of spring and is one of the most amazing festivals anywhere. Historically, local carpenters would light fires, or fallas, on the eve of St. Joseph’s Day (March 19) to honor the saint.

Today, the celebrations last about a week. Each day at 2 pm you can experience La Mascleta from the Plaza del Ayuntamiento, the Valencia City Hall. These rhythmic fireworks are popular with tourists and locals alike.

Look for costumed people on the streets and a celebratory atmosphere. Satirical cardboard sculptures called Ninots are paraded through the streets before making their way to the Crema to be burned on the 19th. 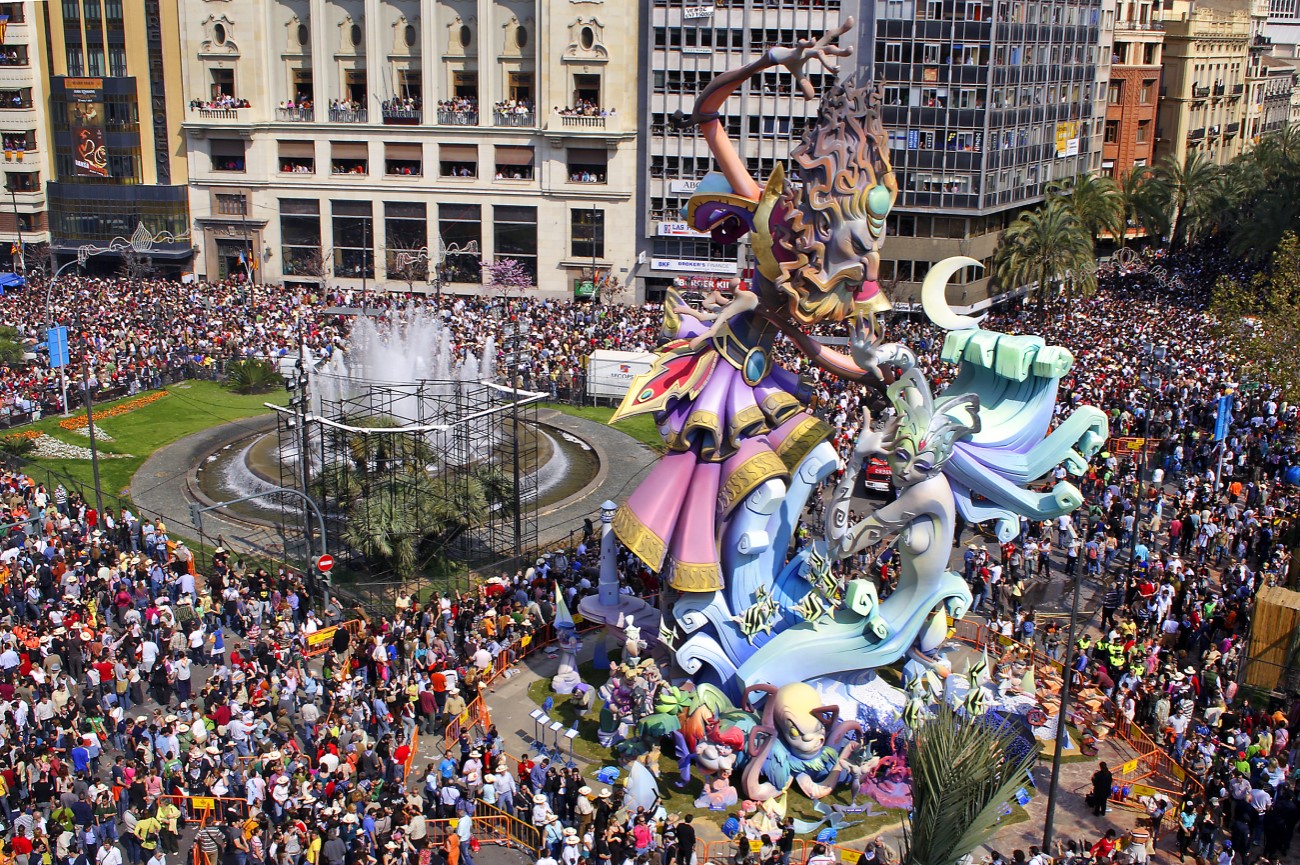 The Valencia Cathedral is a gothic design with examples of renaissance, baroque and neoclassical architecture that has been added over the centuries.

Built on the site of a Roman temple, the Cathedral dates back to the 13th century and can be found between the famous plazas of Plaza de la Reina and Plaza de la Virgen. Inside you will find works of art commissioned by Pope Alexander VI, and beautiful opulent decorative features that are common to Catholic churches in the Iberian peninsula.

Aside from the history and architecture, the Valencia Cathedral has two primary draws: the Holy Grail and Torre del Micalet, or Micalet Tower.

Behind glass in “The Chapel of the Holy Chalice,” you will find the ancient gemstone chalice that is believed to have been used by Jesus at the Last Supper. Of course, there is some controversy about this. Archeologists have dated the vessel to between 4th century BC and 1st century AD but scientific tests have not been performed.

The Micalet Tower is the Cathedral’s octagonal belltower. If you are feeling up to it, climb the 207 steps to the terrace where you can get some incredible views of the city below. 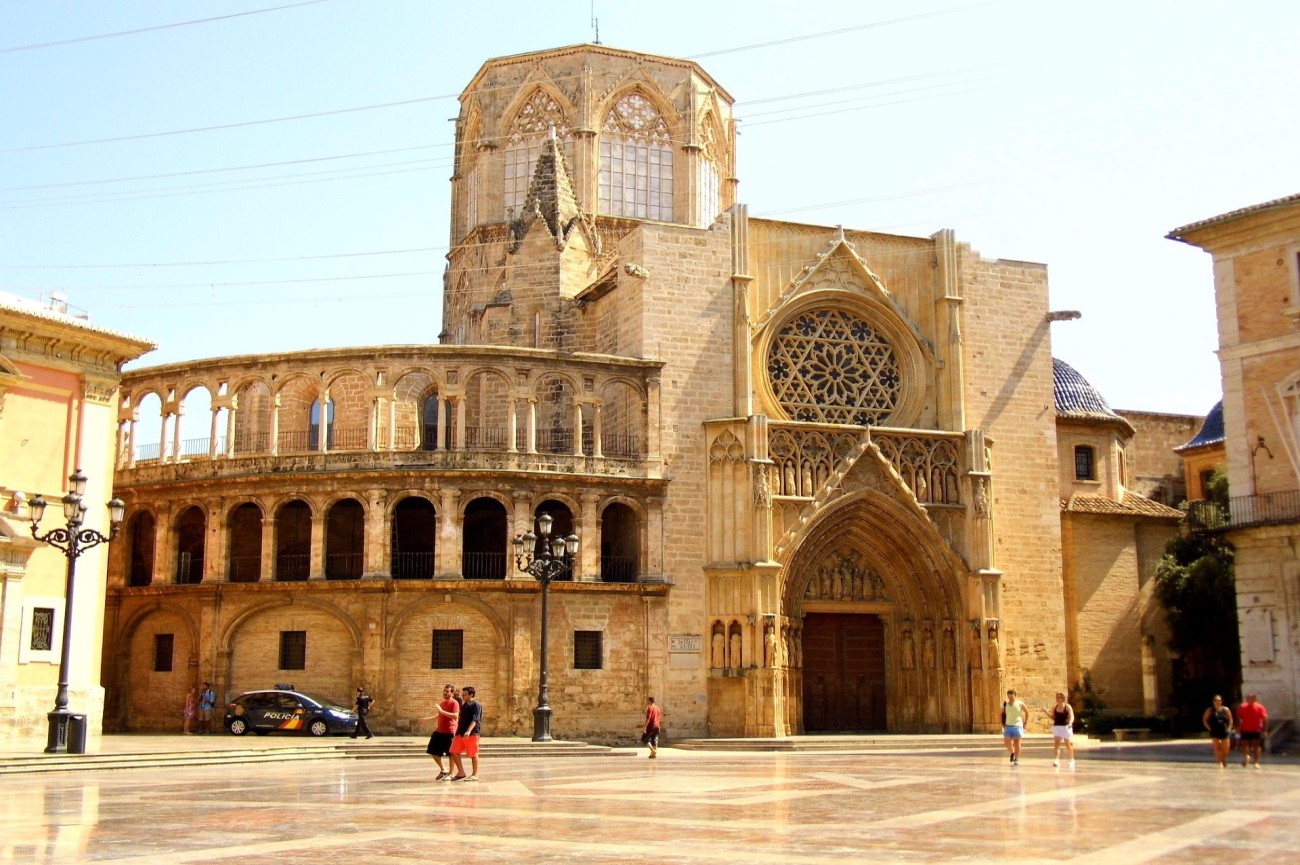 Take in the Street Art

While art and Spanish culture are alive and well all over Valencia, take a trip to the El Carmen neighborhood to see some amazing street art.

The bohemian “capital” of Valencia and beautiful, brightly colored murals created by local artists line the streets and plazas. Some of these works change on a regular basis while others have become long-standing features. Huge displays can be found around the Placa del Tossal and Carrer d’En Gordo.

If you need a short break from viewing the street art, pop in to the Torre de Serranos. This tower is one of 12 that make up the ancient wall that once guarded the city. Climb to the top and enjoy the views of the old town!

It is best to save this exploration until later in the day because Barrio del Carmen really comes alive at night.  As one of the busiest districts in the old town, this is where you want to be for colorful nightlife and delicious food and drinks. Start at the Plaza de la Virgen and stroll down Calle de Caballeros. You will definitely find a restaurant or bar that sparks your interest! Be sure to try some agua de Valencia, a delicious beverage made by mixing cava, orange juice, gin, and vodka! 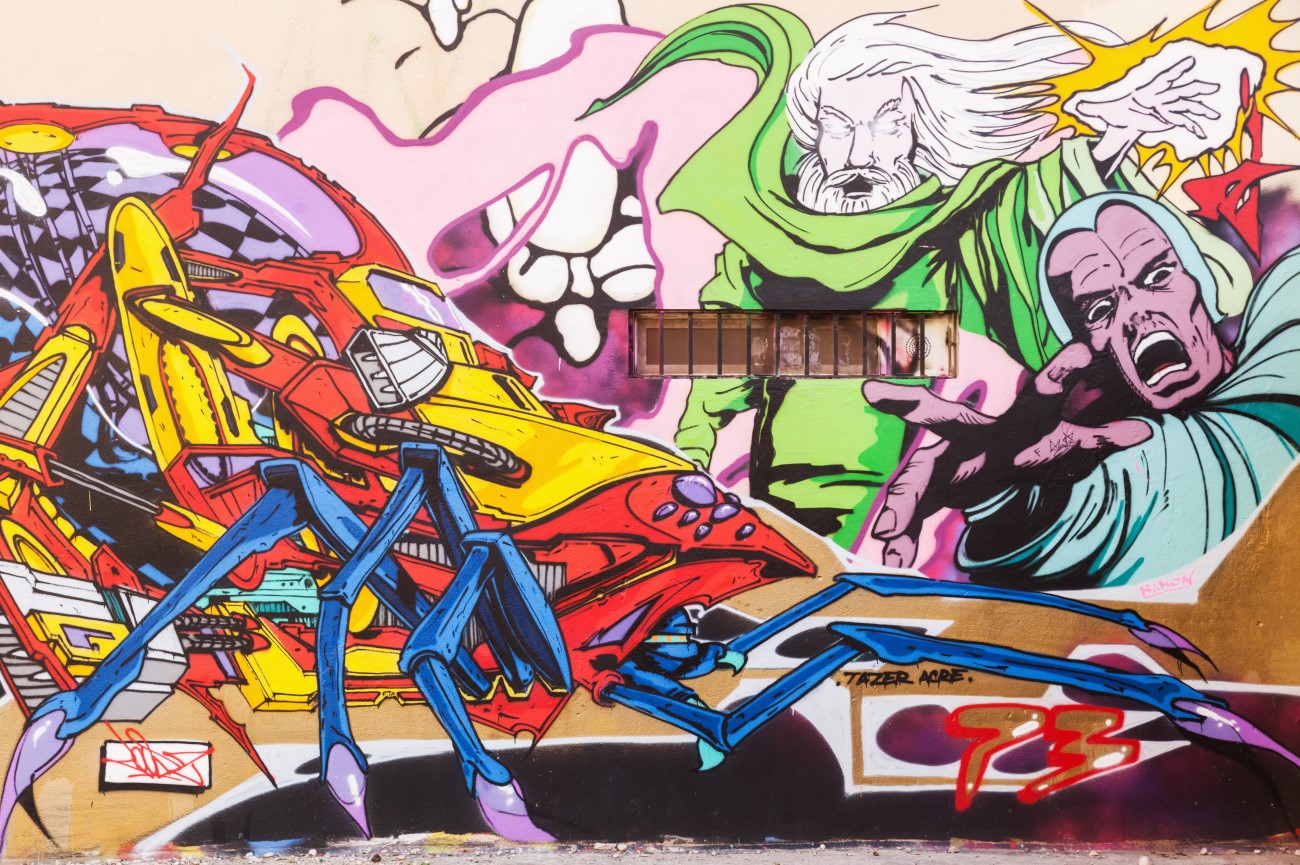 Paella is a popular Spanish dish that can trace its origins to Valencia. All the ingredients, from the rice to the saffron are grown locally so expect vibrant and fresh flavors.

Traditional paella contains rabbit, chicken, and caracoles or snails. But, if snails aren’t up your alley, try the seafood variety that contains large prawns and squid.

Just about every tapas bar and restaurant in town offers paella but to find some of the best, skip the touristy joints, and head to the restaurants frequented by Valencians. Casa Roberto on Carrer del Mestre Gozalbo, and a short walk from the old town, is known for its traditional take on paella. Try the paella negra where instead of the customary yellow, the rice is colored with squid ink.

Near the train station and the Plaza de Toros is El Canyar. This restaurant is often visited by celebrities looking to try some of the best paellas around. Here you can order with chicken and rabbit or prawns and monkfish. Either way, you can’t go wrong.

To really feel a part of the tradition, take a paella cooking class! Grab ingredients from the Ruzafa market and then learn from the masters! 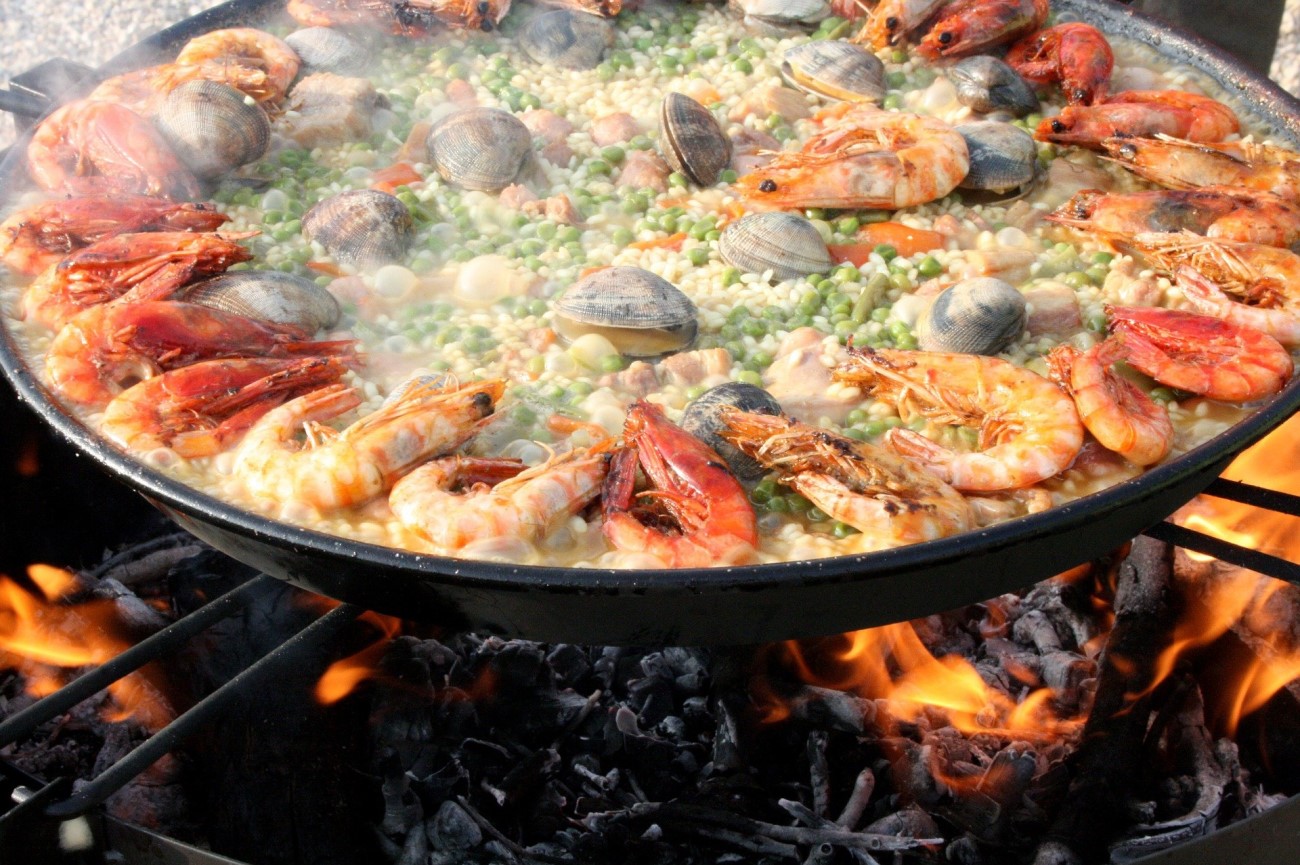 Paella is a popular Spanish dish that can trace its origins to Valencia, Spain

Jardin del Turia, or Turia Garden, is a vibrant green park in the middle of the city. It is named after the Turia River. The river once ran through Valencia but in 1957, the banks were flooded, causing widespread damage. In the 1980s, the water was diverted and the dry Turia riverbed was turned into this 9km park.

The bridges that used to cross the river still exist, adding to the unique vibe of the park. There are 18 of them in total with the oldest dating back to the middle ages.

Fountains, winding paths, orange groves, palms, pine forests, and sports facilities can all be found here. Jardin del Turia is an oasis in the city. 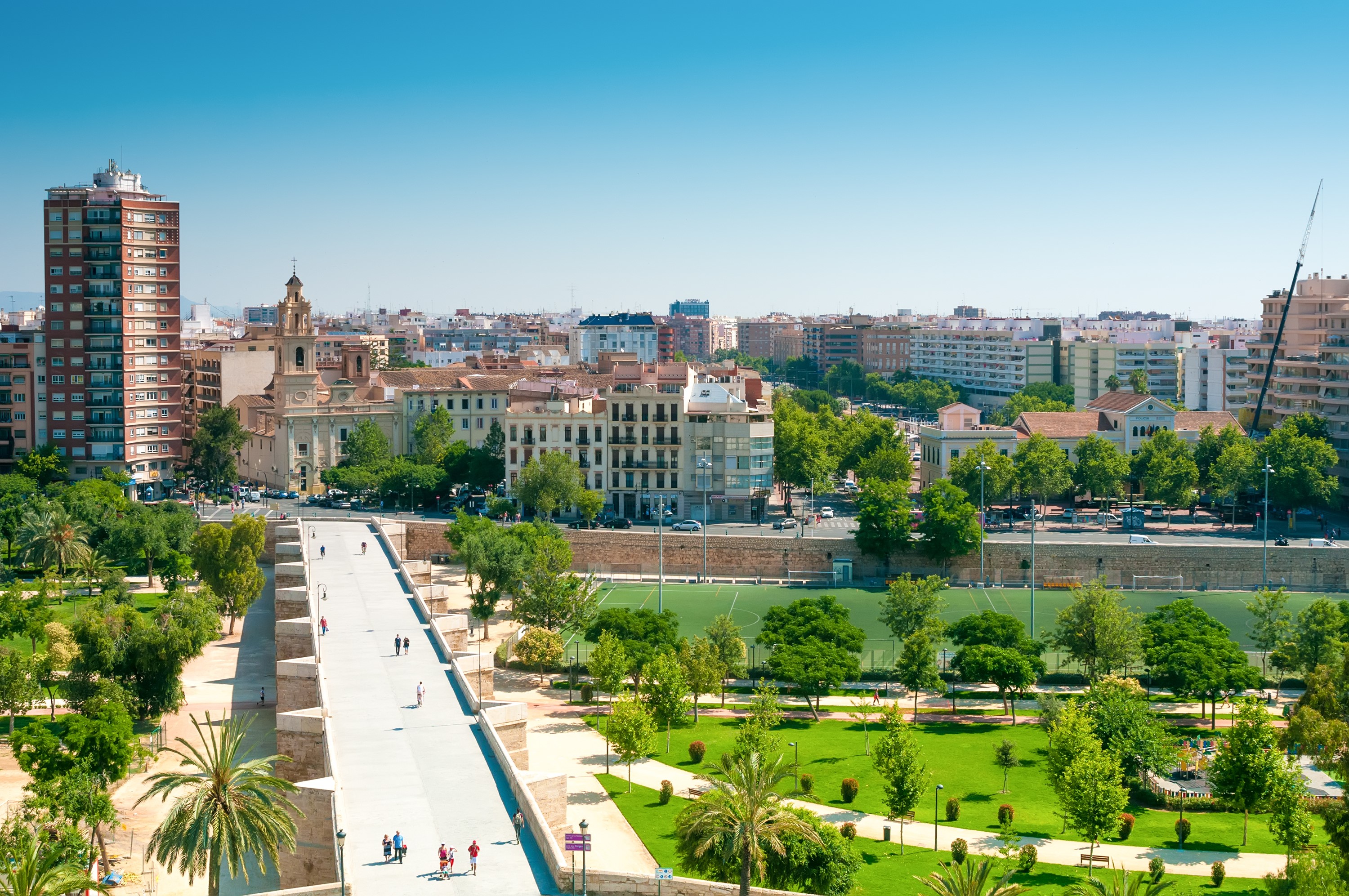 If you have children with you or you are young at heart, visit the Parque Gulliver near the City of Arts and Sciences. This climbable feature is based on Jonathan Swift’s Gulliver’s Travels.

Pretend to be a miniature Lilliputian and scale the giant Gulliver. The are several ramps, stairways, slides, and interactive elements that are fun for all. You will also find a giant chessboard, skating area, and miniature golf course! 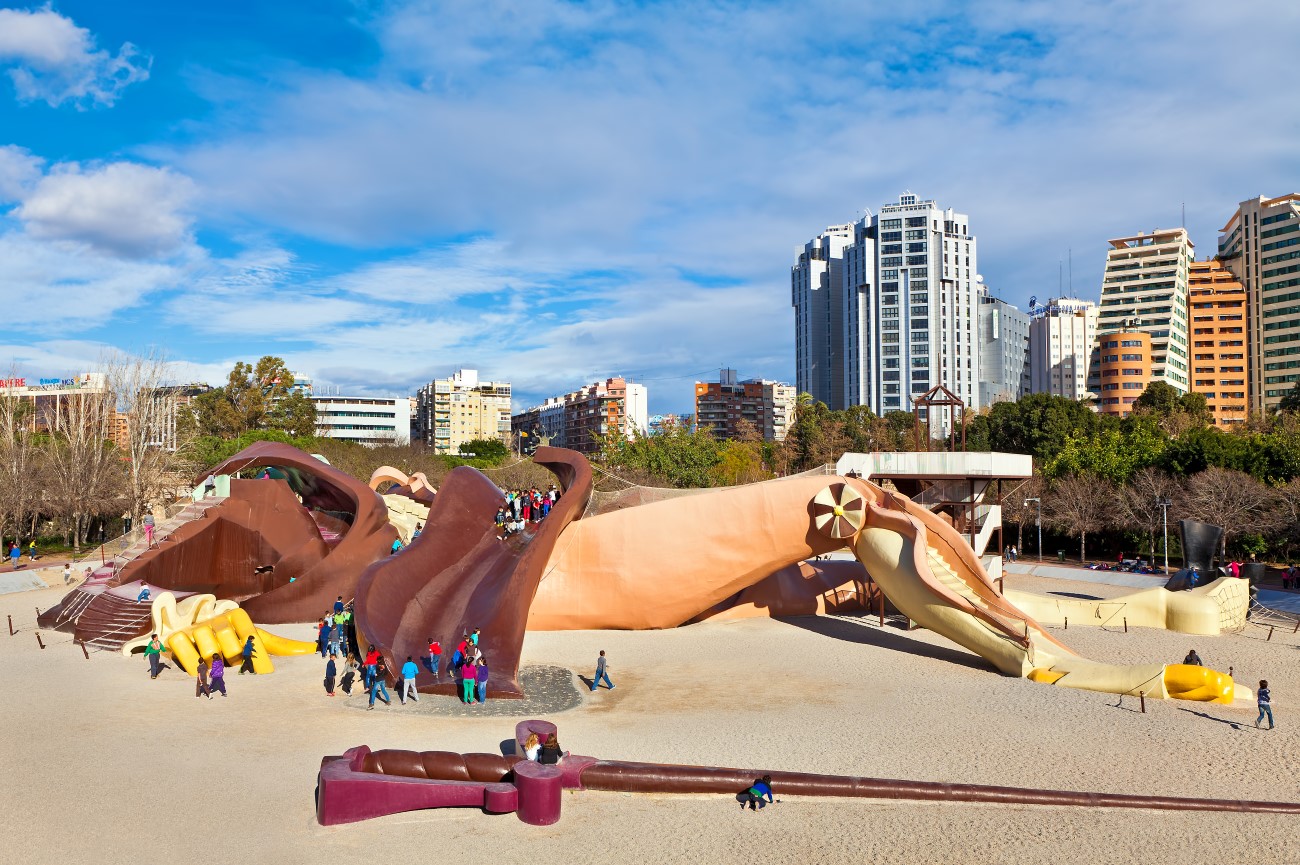 Plaza de Toros is the bullfighting ring in Valencia. This neoclassical building was built between 1850 and 1860 and was modeled after the Roman amphitheaters. If you are not comfortable with the idea of matadors and bullfighting, know that you can actually visit the ring when there are no bullfights taking place. The building itself is quite stunning and worth the visit.

Next to the bullring is the Museo Taurino de Valencia. This bullfighting museum was founded in 1929 and is one of the oldest in the country, containing several interesting artifacts from the 18th, 19th, and 20th centuries. 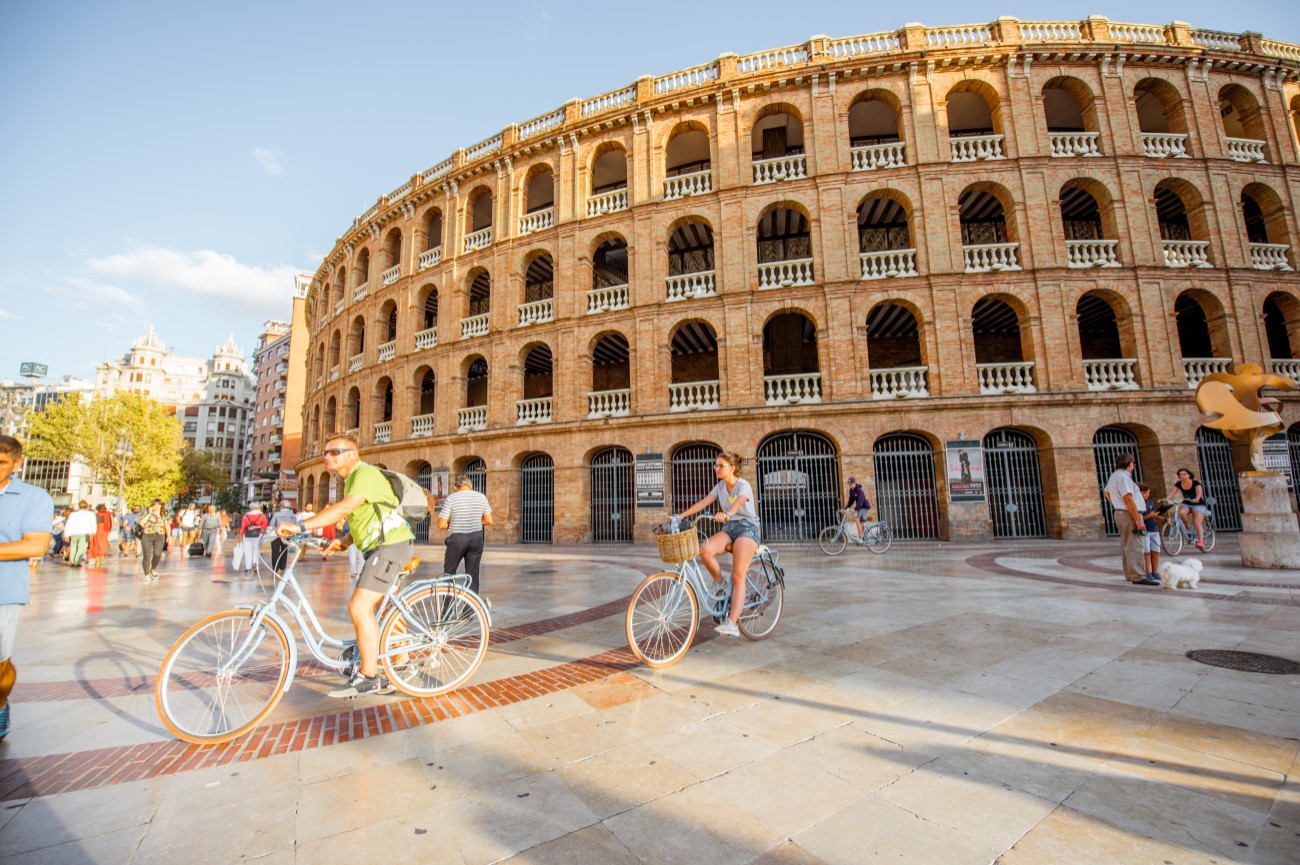 If you are planning a trip to Valencia, Spain, take a look at some of our tour packages. Explore the history and culture of the city with the 6-night Valencia: The Voyage Into The City Of Arts & Sciences package or unleash your inner foodie with the 4-night The Foodie Side Of Valencia - The History Of Paella. If you would rather plan your own adventure, we are here to help. Reach out to us today and we can help you design the perfect holiday!